Love unrequited robs me of me rest;

And weaves itself into my midnight slumbers...

I usually sleep the sleep of the just, anywhere anytime, when I feel like sleeping, standing lying or sitting, I close my eyes, turn off my brain and start to snore and drool almost at will. To hear people tell of insomnia is to hear a foreign language for me. And yet the other night it happened...to...me! I was tossing and turning, just as William Schenk Gilbert wrote in his Nightmare song from the operetta "Iolanthe." The Lord Chancellor isn't doing well and he breaks out into song describing his failed attempts to sleep and the incoherent dream that followed when he did finally get some shut eye:

When you're lying awake with a dismal headache

And repose is taboo'd by anxiety,

I conceive you may use any language you choose

To indulge in, without impropriety;

For your brain is on fire, the bed-clothes conspire
Of usual slumber to plunder you:

First your counter-pane goes, and uncovers your toes,

And your sheet slips demurely from under you;

Then the blanketing tickles, you feel like mixed pickles,
So terribly sharp is the pricking,

And you're hot and you're cross, and you tumble and toss,

'Til there's nothing twixt you and the ticking. 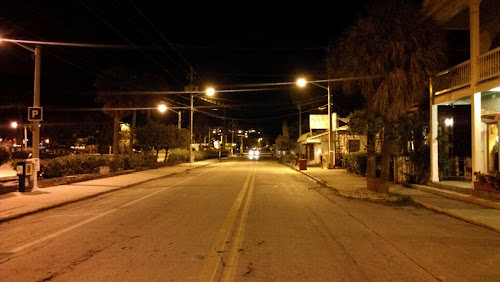 I woke up a perfectly happy sleeping hound, and it was cold enough she had chosen to curl up on her bed not her usual spot on the cooler wooden floor, and together we took a ride into Key West at about 4:30 in the morning, a cool windy day but not boasting temperatures in the fifties that were scheduled the next day.

When you get some repose in the form of a doze,

With hot eyeballs and head ever aching,

Your slumbering teems with such horrible dreams

That you'd very much better be waking;

For you dream you are crossing the channel, and tossing
About in a steamer from Harwich,

Which is something between a large bathing machine

And you're giving a treat (penny ice and cold meat)
To a party of friends and relations,

They're a ravenous horde, and they all come aboard 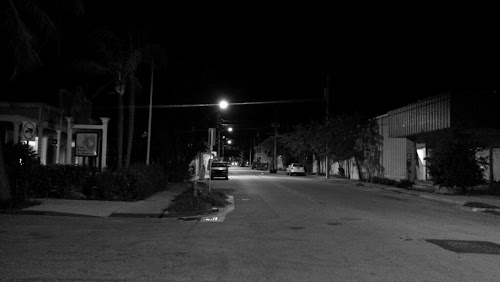 The highway was gloriously empty of course and we made good time to the city where I decided to park near the former waterfront market and let Cheyenne choose the way. We were utterly alone with the night and the wind and the few lights burning here and there. Bars must close by four each morning so the drunken hordes had left already.

And bound on that journey, you find your attorney

(who started this morning from Devon);

He's a bit undersized and you don't feel surprised

When he tells you he's only eleven.

Well, you're driving like mad with this singular lad
(By the by, the ship's now a four-wheeler),

And you're playing round games, and he calls you bad names

When you tell him that ties pay the dealer;

But this you can't stand, so you throw up your hand,
And you find you're as cold as an icicle,

Crossing Salisbury Plain on a bicycle. 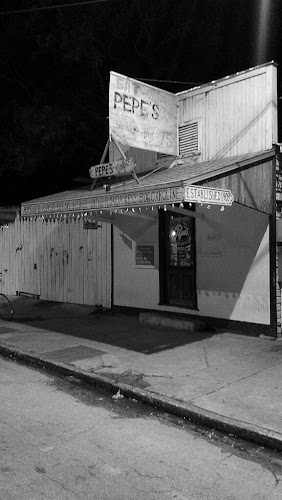 I take great pleasure in fiddling with my Android camera and with no one around I let Cheyenne wander at will and while she sniffed I took pictures. It was most relaxing, playing with the settings and wasting film by deleting pictures that didn't please me. I love digital pixels, easy come easy go! They are not the best tool to seek immortality but there again eternity seems a bit long drawn out to me, only having ever experienced it in doctors' waiting rooms.

And he and the crew are on bicycles too,

Which they've somehow or other invested in,

And he's telling the tars all the particulars

It's a scheme of devices, to get at low prices
All goods from cough mixtures to cables

(Which tickled the sailors) by treating retailers

As though they were all vegetables: 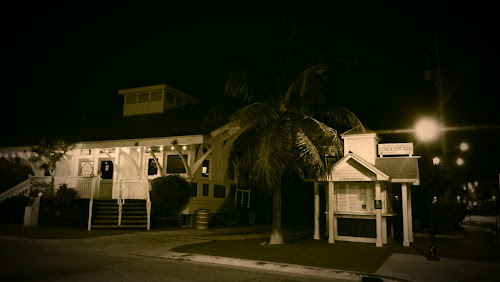 The city looks quite different at night, a difference enhanced by the use of black and white pictures or using the monochrome setting in the camera, or sepia tints. So many choices! The parking garage that in daylight looks like a cement lump here looks different. 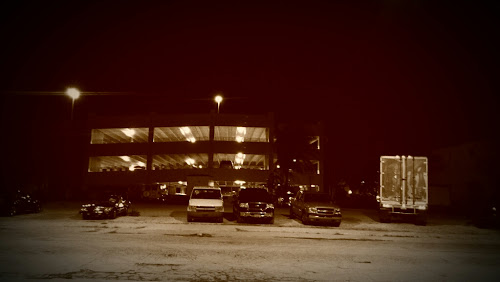 The Half Shell was still displaying blue and white colored lights to celebrate the recently completed (hint hint) season.

You get a good spadesman to plant a small tradesman

(first take off his boots with a boot tree),

And his legs will take root, and his fingers will shoot,

And they'll blossom and bud like a fruit tree;

From the greengrocer tree you get grapes and green peas,

While the pastry-cook plant cherry brandy will grant,

The shares are a penny and ever so many

Are taken by Rothschild and Baring's,

And just as a few are allotted to you, you awake

With a shudder, despairing... 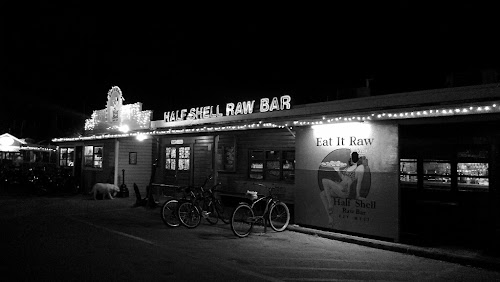 Conveyances in Key west can be as simple as a bicycle with a bathtub trailer. Quite brilliant I think every time I see it. 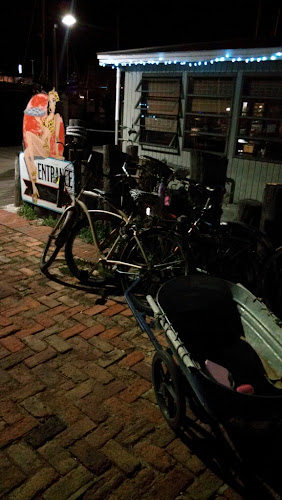 And this is pioneer lo the fishing retail trade we are told is a man named Booty Singleton and fondly remembered by friends and families and commercial fishermen. The cold brought to mind the well known phrase involving brass monkeys (Wikipedia to the rescue) when looking at his bronze statue. 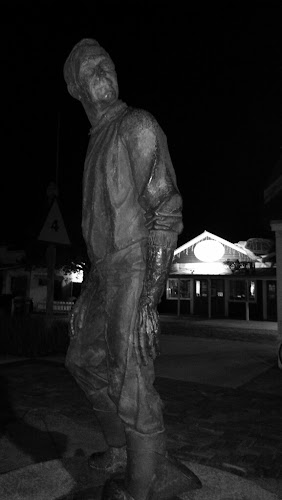 I liked the juxtaposition of the modern and terribly useful plastic bucket on the deck of the revered "tall ship" which is a common name for these boats but is not really a maritime name at all. A Barque or a square rigger or some other thing never much considered by the sellers of advertising... 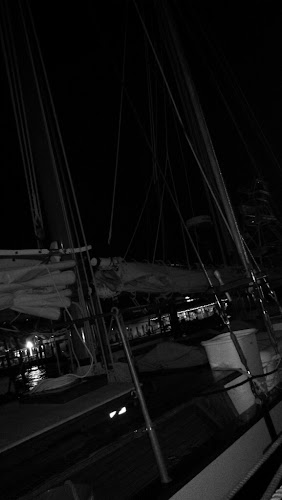 The docks at five in the morning are quite evocative I think, a place for dark deeds and derringer do. Or just me and my dog ambling. 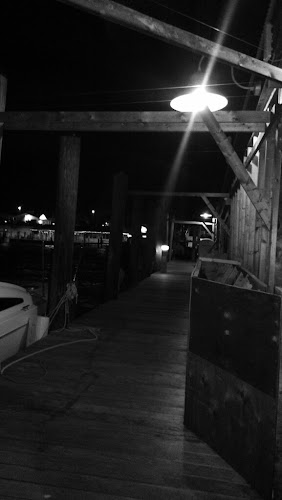 It was windy. Really. 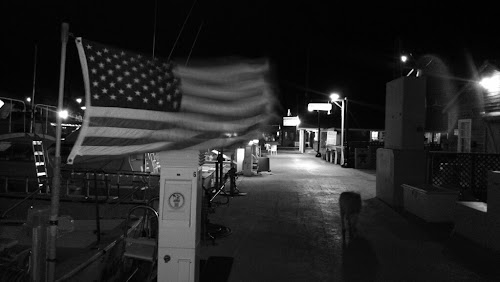 You're a regular wreck

With a crick in your neck,

And no wonder you snore

for your head's on the floor

And you've needles and pins

From your soles to your shins,

And your flesh is acreep

For your left leg's asleep,

And you've cramp in your toes

And a fly on your nose,

And some fluff in your lung

And a feverish tongue,

And a thirst that's intense

And a general sense... 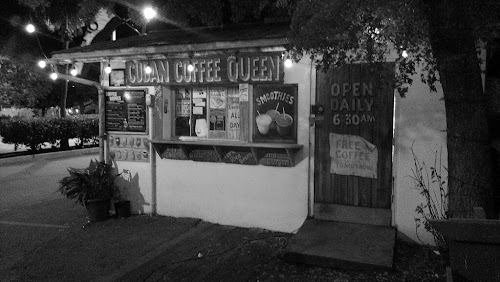 ...that you haven't been sleeping in clover;

But the darkness has passed, and it's daylight at last!

The night has been long, ditto, ditto my song,

And thank goodness they're both of them over! 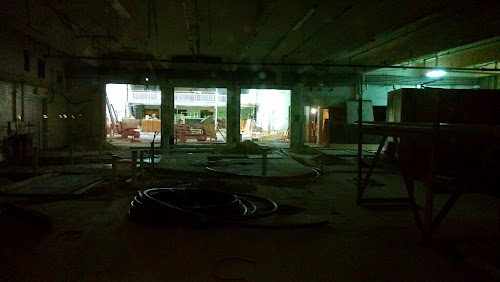 Above we see the slow pace of construction of the interior of the old Waterfront Market that is to become a brew pub some day, perhaps soon. And below someone curled up like a dog trying to keep out the cold. 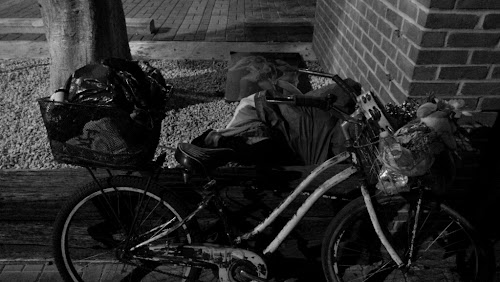 Windy enough that night that trees fell over, which won't impress people Up North covered by the worst freeze in 200 years. That's why I have not mentioned our tribulations in the land where 60 degrees seems frigid. Where snow falls and water freezes explaining that sixty degrees in the damp windy Keys feels so much colder cuts no ice as it were. 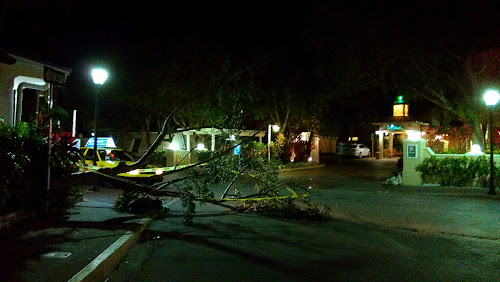 Cheyenne had a thoroughly good time and covered my face in kisses for she is an expressive dog. Then she breakfasted and passed out while I got ready for work. 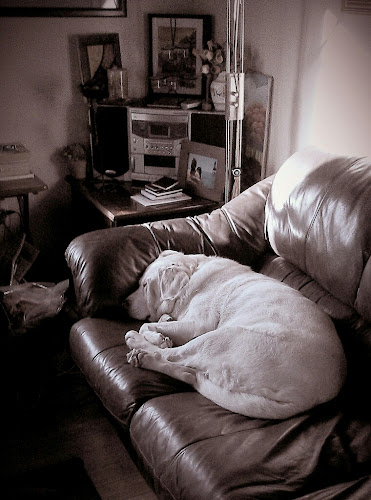 It was a cold ride back to my job but I don't think she spared me a thought as this Labrador never suffers from insomnia.