You've heard of Tuscany which is much larger and more varied than my native Umbria which in turn is better known than the region to the northeast of Umbria along the Adriatic coast. That would be the mountainous and relatively isolated region known in English as The Marches, translated from the Italian Le Marche (pro: mar-Kay).

Mountainous yes, but also lots of rolling hills, agriculture and beautiful views. There is also some excellent riding on rolling hill roads. I loved the 1200 ST on these sweeping roads and Giovanni remarked on my perfect lines through the turns. It was really excellent riding.

We had to get the paper GPS out from time to time to find our way to the tiny town of Pollenza where Rossana had discovered a fascinating and privately owned Vespa scooter museum.

It was a hot day and we set aside our jackets in our huge, fuss-free BMW bags.

The countryside rolled by and my wife had a ball playing with the camera as we rode.

Until we finally reached a coffee stop in the curiously named town of Cingoli (caterpillar tracks, as found on a tank). One more lovely Italian hill town.

Te coffee was welcome and Rossana our self appointed tour guide hustled us into the medieval church where I accidentally stepped on the white carpet and got a dressing down from an old hag in the back pew. She turned put to be the grandmother of the bride and took umbrage at me clumping on the pristine carpet. The encounter rather inclined me against Cingoli (pro: cheen-go-lee), but Rossana got it into her head we should stay to see the bride.

The wedding party showed up persuading the bulk of our party it was time to go, but Rossana is stubborn at times and it took the local cop telling us we were in a no parking zone to get her to shift.

We bugged out in short order not least because it was getting to be afternoon and we had a long way to go home, even after we found the wretched museum.

Curve followed curve and I had fun shifting up and down, taking the corners as they came with the ST which felt like a bicycle it was light through the turns.

Finally we pulled up at Pollenza a small town near the provincial capital of Macerata.

The unknown Vespa museum was just a few steps away.

- Posted using BlogPress from my iPad
Posted by Conchscooter at 4:17 PM No comments: Links to this post 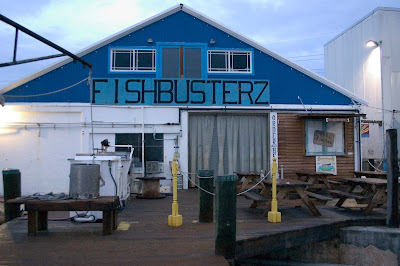 Fishbusterz by GarytheTourist. A commercial fishing dock, ice house and restaurant. I liked it a lot when it was new and raw, but gentrification has included loud music and cutsy decoration. Sitting out is still nice and the fish is obviously fresh.
Posted by Conchscooter at 4:01 PM No comments: Links to this post

We were going to Frasassi, a town whose name translates to " between stones" and indeed there was a bit of a canyon where we were going for lunch and between the canyons was the greatest cave network you've never seen.

Giancarlo showed up after breakfast wearing his American Patriotic red white and blue suspenders. There was much discussion, and hand waving as we discussed our route. Giovanni's wife Rossana made a point with her hands while Giancarlo checked Google on his iPhone.

Giovanni and Rossana rode their BMW R1200RT while my wife and I rode our rented R1200ST. First stop, of course was for coffee -espresso for the hard core and cappuccino for the weaker riders...and a big cream doughnut for me because it looked too delicious to waste on some stranger other than me.

We pulled up in the middle of a wedding reception, our first marital faux pas of this particular Saturday. "Quick! Get a picture of their behinds!" Giancarlo told the photographer in the group, nothing if not obliging.

We got there and we knew we were there when we found a parking lot filled with tents selling the inevitable...

Line up for the bus and off we went crowded like sheep to the biggest most spectacular caves no one has heard of.

Photos were not permitted of corse but iPhone users, not my wide or Giovanni of course, clicked away at the back of the line. I got my pictures from the posters at the entrance. My wife took an English audio tour that failed to start so I was left to do a running translation from my mother tongue to her mother tongue.

It was a 90 minute two mile walk through a series of vast spectacular chambers, the largest 750 feet tall, larger than most basilicas in the world. There is a lot of moisture in these mountains in the Marche region and that combined with the caves gives rise to astonishing stalactite and stalagmite formations. The largest of those is said to be 70 feet long hanging from the ceiling. It was absolutely fantastic. But no photos, damn them and damn me for being a rule follower.

After our 68 degree hike we were debating the all important lunch.Then this dude interrupts our endless discussion and says simply follow me. So we did, with Rossana venting her ridiculous bourgeois fears that we were all going to get ripped off in these lonely mountains.

He led us up the canyon to his family home where we sat and ate,

Pasta followed by sausage and lamb kebabs and potatoes and white wine and...

... panna cotta, custard as delicious as it was pretty.

Then it was onward and upward to our next riding appointment.

The mysterious Vespa museum of Pollenza, as unknown as the caves of Frasassi, and just as fascinating. 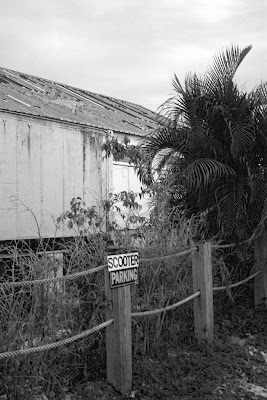 Stock Island Parking Lot by GarytheShrimper. No, make that GarytheTourist.
Posted by Conchscooter at 8:01 AM No comments: Links to this post

So we moved on from San Marino the delightfully anachronistic tax free enclave and drove back into the real world of Italian castles, churches and hill towns. Urbino hove into view and hour south of San Marino.

We parked the car outside the city gates as is the modern way in Italian towns where pedestrian zones are enforced everywhere -bring walking shoes. We passed a couple of girls with a ball playing a game I used to play as a kid where you have to bounce the ball in certain ways a certain number of times or forfeit your turn. The explanations droned on as we stumbled past on an increasingly steep down hill.

A botanical garden, who knew? Perhaps we should twin it with the one on Stock Island.

One more magnificent palazzo in the half light.

And the views across the hills of the Marche. One thing I do miss when living close to the Equator, is the long twilight of northern latitudes. It's been getting dark around 9:15 and it takes a long time between the setting of the sun and the onset of total darkness.

The cathedral long since closed but had I known I'd have brought my iPad as it seems to be a wi-fi hotspot.

My wife tried to get online with her iPhone (she has disabled data roaming as it is expensive around here) but the kid apparently knows the secret password.

We had been on the road since eight in the morning in La Spezia on the Mediterranean coast and we were three hours from our bed on winding cross country roads...so we planned to stop for ten minutes and say "been there done that" but reality has a habit of intruding and we wanted a break and we were feeling lazy and the outdoor restaurant looked inviting and I wanted my wife to taste the local Verdicchio.

So we sat down for a quick appetizer. Which wasn't because it ended up a slow food meal at slow speed and the waiter was excellent and the food was better and the night air was warm and we were feeling pretty good.

There was a group of musicians speaking English,after a fashion, at the table next door who had been playing in the town and my wife likes to listen to what's going on around her.

Me I wanted to taste the strozzapreti pasta, the priest stranglers, thick double strings of pasta with a sharp sheep cheese sauce.

And tagliatelle with truffles shaved in this case in large delicious smoky pieces.

Our musician neighbors got flat bread so we had to try the crescia too...

It all went very well with the Verdicchio an astringent delicate white wine with a green tint. A jam cake, crostata, to finish and we rolled off up the hill around 11:30 pm. That's how it goes on an Italian road trip.

I used to play the tuba in the town band in Todi when I lived there and was quite surpassed to see an old sousaphone in a wine store window. Or a 1927 Benelli 175cc in another. Nostalgia rules!

They had rolled up the caets in Urbino by thentime we left.

We drove home through heavy sudden downpours winding this way and that listening to, of all things, Wait Wait Don't Tel Me from NPR on my wife's iPod. Italian road trips can be quite surreal if you have the right equipment.


- Posted using BlogPress from my iPad
Posted by Conchscooter at 4:18 AM No comments: Links to this post