I have never had a drink at Sloppy Joe's on Duval Street. I look inside and the noise and the appalling crowds freak me out. My idea of a place to drink is somewhere quiet and shady where there is room to talk, not this bedlam. 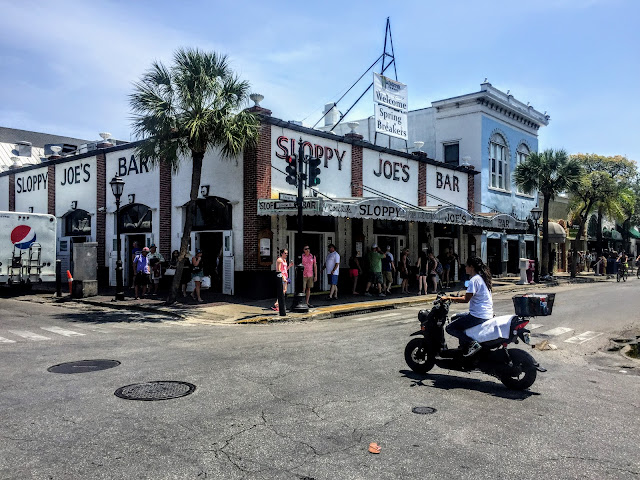 But I am in a tiny minority for this bar prides itself on being what Hemingway wanted when he lived in Key West, his buddy Sloppy Joe Russell made this place his own after he moved out of Captain Tony's location following an argument with the landlord. They tell the story at the Hemingway House tour of Hemingway helping to carry the toilet fixtures up Greene Street to the new location of his favorite Key West Bar. I don't think this ishat the writer had in mind when he went drinking: 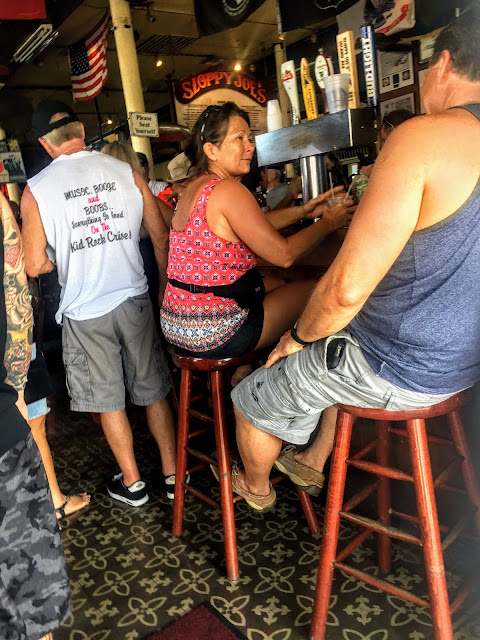 I found this online discussing the Nobel Laureate's drinking habits (ice cold martini mostly gin was what he preferred they say):
From his experiences in World War I and Lost Generation Paris to safaris in Africa and fishing the Gulf Stream, from covering the Spanish Civil War and World War II to chasing German U-boats off the Cuban coast, Hemingway’s life was one full of adventure, Greene reminds us. “Don’t bother with churches, government buildings or city squares,” Papa once said. “If you want to know about a culture, spend a night in its bars.” 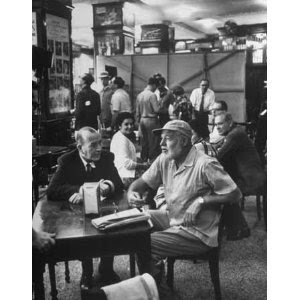 One feature you could like about Sloppy Joe's is the indoor/outdoor nature of the seating arrangements. So you sit there perched and get your picture taken. You were here drinking where everyone drinks because HE drank here they say. The weird nature of tourism. I wonder if any of them have read anything HE wrote. 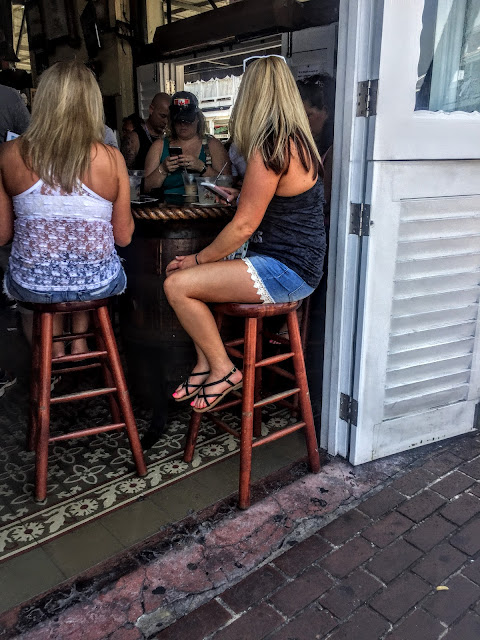 The crowds are outside as well pressing in on the sidewalks making it even less fun to be on Duval. 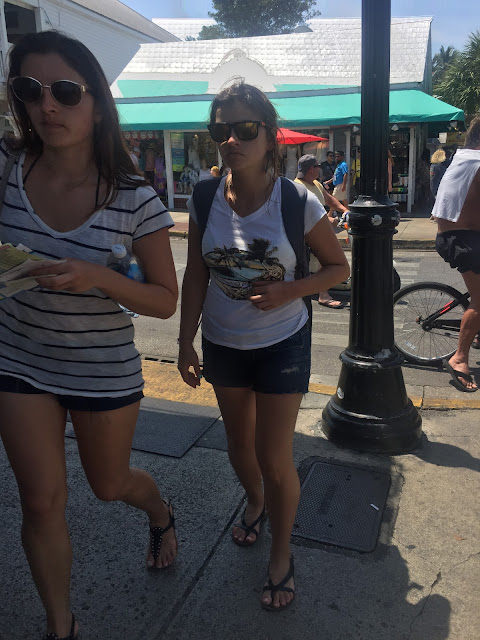 My kind of spot: 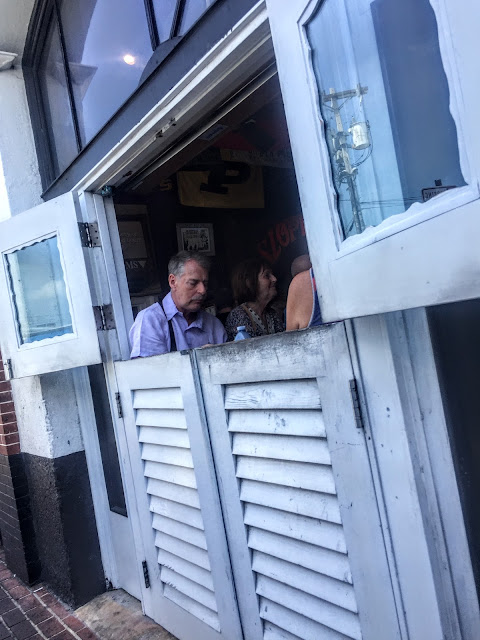 One day I will have to break my self imposed taboo. I shall drink at Sloppy Joe's and try to listen for Hemingway rolling in his grave. I doubt he'd care where I drink though... 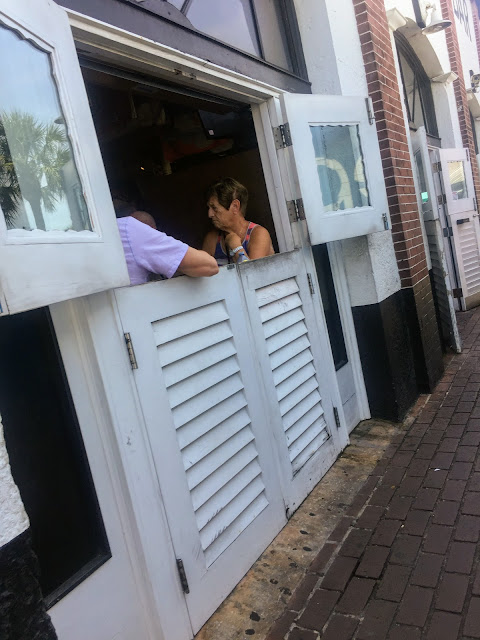 ...I don't think this kind of look-alike caper in his name would do much for his equanimity:

Hemingway built a wall around his house for privacy and he claimed his home in Cuba (LINK) as his favorite home. 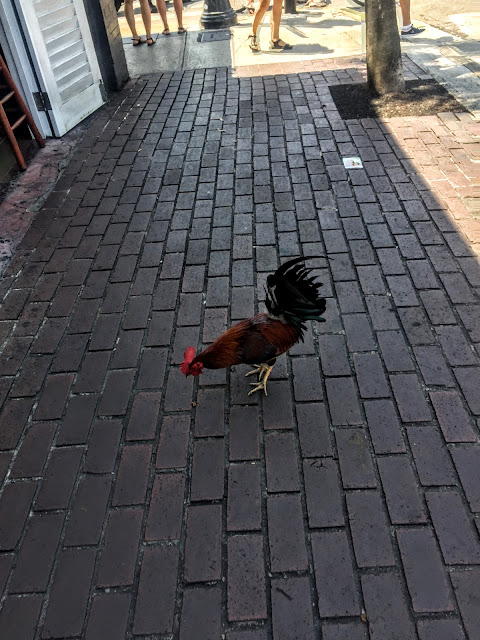 But it's all for the dollar not the authenticity. I rather prefer to see chickens as a source of innocent amusement and photography than attempts to lay claim to Hemingway's haunts. 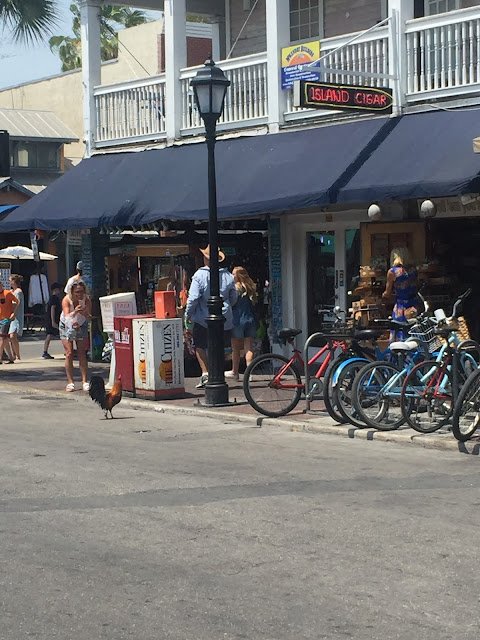 Well there we are. That's Sloppy Joe's. Weird and wonderful and 79 years old they say so they must be doing something right. Keep reading to see the other side of the Lower Keys...as seen by me.
Posted by Conchscooter at 12:00 AM 2 comments: