I was walking Cheyenne on a quiet residential street in Fort Lauderdale a week ago when we were in town to put my wife on a flight to San Francisco, and on this street where nothing was happening and no one was to be seen I saw an odd thing. 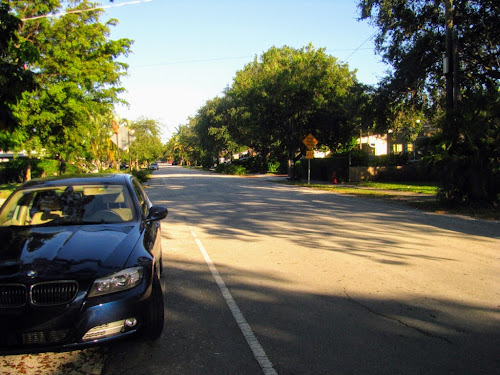 When I saw the sign tacked onto a pole I was put in mind of the old readers in cigar factories. Rolling cigars is boring manual labor they say, and to pass the time a worker was hired to read edifying books to the workforce and the reader would stand at a lectern in front of the cigar tables and read all the work day to the other employees, it's the sort of job that has vanished and in retrospect seems ludicrously inefficient in our world of electrons and no unions. The sign was in Spanish and its message was simple, and from another era in another world.

We read letters. Ten dollars. Bloody hell, I thought, there's a fortune to be made exploiting the illiteracy or the lack of English in this immigrant population. And then we heard the news that Latinos and Asians had voted Democrat in droves this last week. One commentator I heard on NPR suggested, rather interestingly I thought, that it isn't immigration policy that drove the vote, rather it is the perception among many immigrants that the old white Republican code that All Government Is Bad doesn't correspond to the immigrants' reality. Perhaps because that is the case for me, I believe regulated government has a firm place in society, I like to think it is the same for other migrants as well. It was an interesting idea and I have no doubt those migrants anxious to learn to read English will also expect an education for their children who with them, seek a better life under the flag of the US Government.

Seven lineman and several trucks took off for New York ten days ago from sunny Key West. It's been cool and windy down here, overnight lows managing to get just below sixty degrees one night, but that's as nothing compared to what these tropical workers found in the Empire State.

I had heard the trucks were heading north but the newspaper reported their services weren't required. What the paper failed to report was that they were redirected even though they lack proper winter clothing! Poor buggers! You can see in these pictures, from the Keys Energy website how their clothing is trying to reflect conditions as they traveled north, shirt sleeves at home and jackets blending in with brown Fall leaves on the road and woolly watch caps in the snow...

It took two days to drive up to New York with three bucket trucks, a utility truck and a pole trailer. In fact Delaware, unscathed, turned down the help but on November First the Long Island Power utility stepped up and asked for the Keys' help, workers who have more experience than most dealing with hurricane damage. But not like this.

It may seem odd but I know half a dozen of my young colleagues in Key West, Conchs born on or around the island, who have never seen snow, thus it was the cause of some great merriment to see their friends and neighbors trying to do their job in conditions that aren't just trying but downright peculiar if you have lived your life in the only frost-free town on the continent.

I heard stories that the utility workers also faced the stereotypical bad humor of people who like to live in New York who chose to berate our utility men for their "delayed" response. And it did them no good to protest they had trudged all the way from distant warm Key West to help. And all joking aside, help they did, and are helping, seen here in a place that goes by the unhappy name of Hicksville, New York.

It's a funny story to read about our people working in forty degree weather and worse, repairing lines with snow on the ground, but the post hurricane conditions in New York and New Jersey are a source of a lot of comment in Key West where surviving a storm is matter of course. Not in blizzard conditions of course.

Perhaps it is because we half expect hurricanes any summer, perhaps because we live so obviously close to the source of stormy discomfort, the ocean, that we live our lives half prepared for disaster. I would be embarrassed to run out of fuel food and water within three days of a hurricane strike. Granted I have a good job and thus disposable income thanks to my lack of offspring, but I make sure to have supplies on hand year round. It's a way of life. It was shocking to see the widespread helplessness in the face of an act of natural ferocity whose arrival was accurately predicted for days ahead of the actual event. I am proud of the help that our tiny community sent Up North and admire their tenacity in conditions I never particularly wish to see again, never mind work in. Good for them.