We had tickets to the theater when the coronavirus hit the fan. So much for that. I can confirm the Waterfront is still here but I haven't seen the Red Barn as the driveway to that theater is locked. Coronavirus may have swept it away as it seems to be sweeping away every civilized thing in its path. 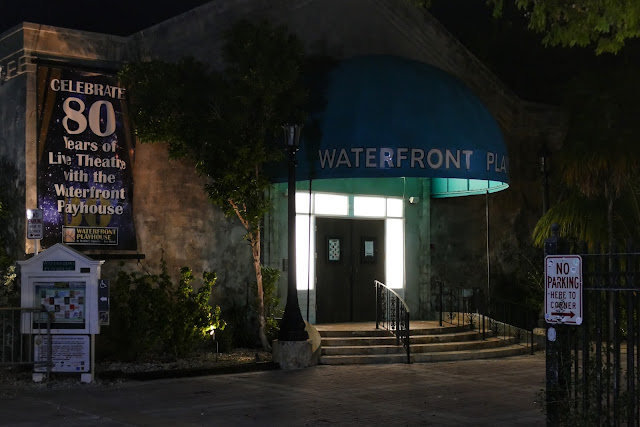 The Pez Garden is still there happily even though that too is locked. They call it the Pez Garden in Key West as the notable citizens represented there are depicted by bronze busts stuck on long rectangular pillars that look like nothing quite so much as Pez dispensers. 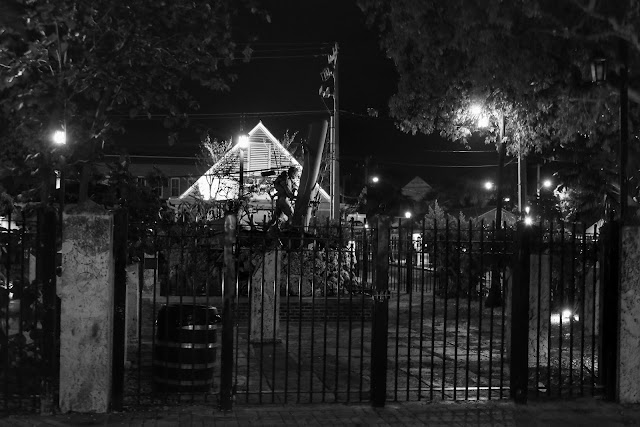 They look like this, below, but this one is separate placed next to the building that was named after him, thus he is outside the locked Sculpture Garden next to Mallory Square. 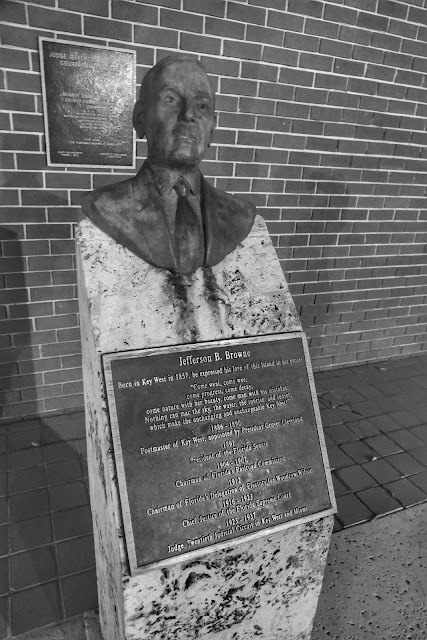 You can see why they named the old courthouse after him. I wonder how his eminence would have coped with the coronavirus? One likes to think he would have navigated the crisis like a gentleman. 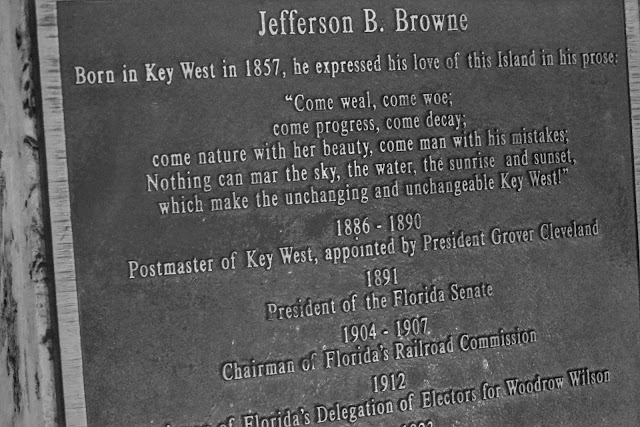 Back in the alleyway between the Waterfront Theater and El Meson de Pepe we find the ficus roots taking over the old coral wall and very artistic it is too: 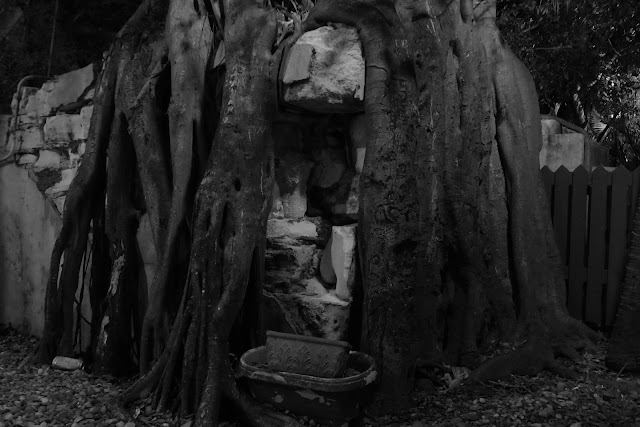 Cigars we were once worth more to Key West than pirates, though pirates that never existed in Key West are more glamorous: 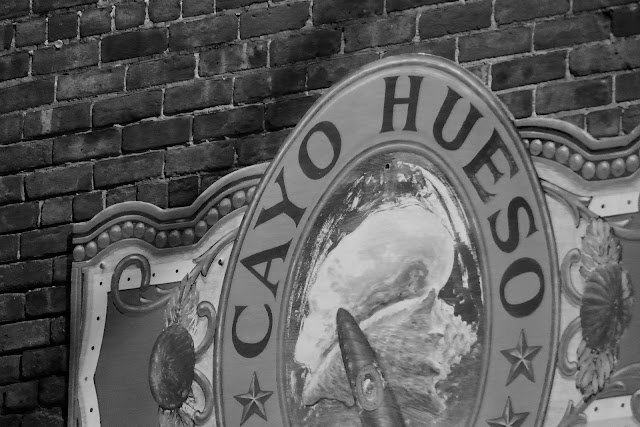 Lots of parking if you need some and no valets to assist you either. Parking meters aren't working at the moment either so you know the fabric of civilization is rending just a little bit. 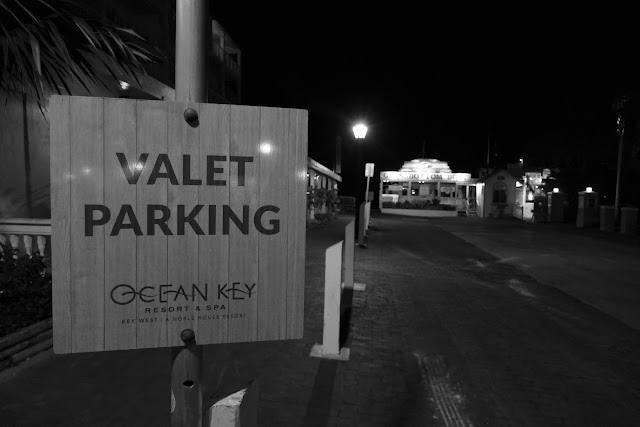 Rusty was surprisingly enterprising at the edge of the dark black sloppy ocean waters. The glass bottom boat is parked (and locked) for the duration in case you had some mad idea things were getting back to normal. 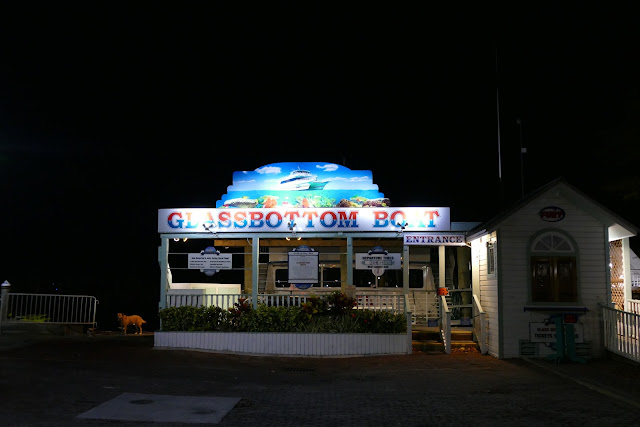 The weird thing is people are still calling the police department asking if they can come down for a visit. And they don't seem that thrilled to be told that no, the road is closed to non residents and hotels are closed. "Does that include air B and Bs?" asked one hopeful dimwit. He seemed surprised when I told him two people have been arrested so far for trying to rent vacation rooms. 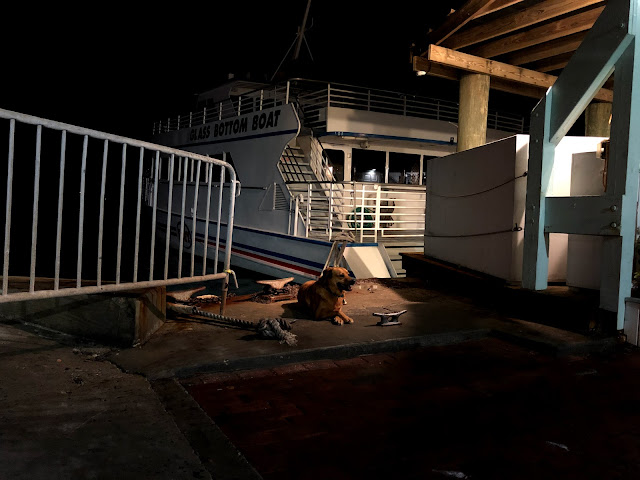 There is no doubt everyone wants things to start back up but even though I don't really understand the mechanism of transmission of this weird virus, it seems to pop back up when people clump together. So do you leave the cities empty and people out of work like this? 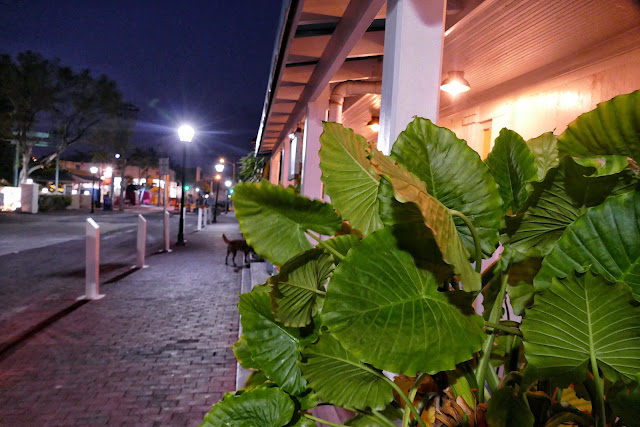 Or do we risk a lot more people getting ill in a hurry and overwhelming hospitals? I think social distancing in Florida has been obviously pretty hit or miss and  now its getting worse as proposals to ease up start leaking in certain communities. We are lucky as long as the Sheriff holds the roads closed at the county line but Up Noprth we have seen people clumping on beaches in Jacksonville. 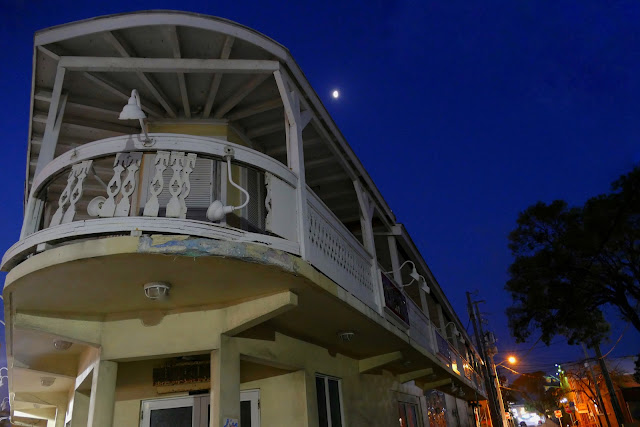 I'd like to give them time to see what happens before we go whole hog down here. If in three weeks Jacksonville isn't a hot spot I say we go for it...but let them be the guinea pigs first as they seem keen to throw caution to the wind. I don't mean to imply anyone's  asking my opinion but honestly I'm not keen to be the first to open the door into the haunted house. 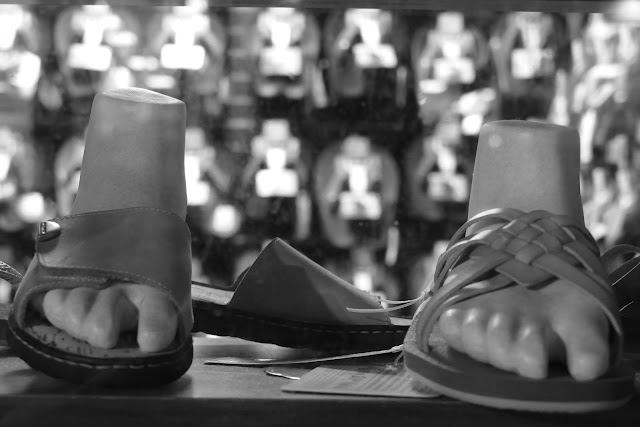 It's quite possible there are no ghosts behind the closed door, and perhaps there isn't much virus in South Florida but what if there is? 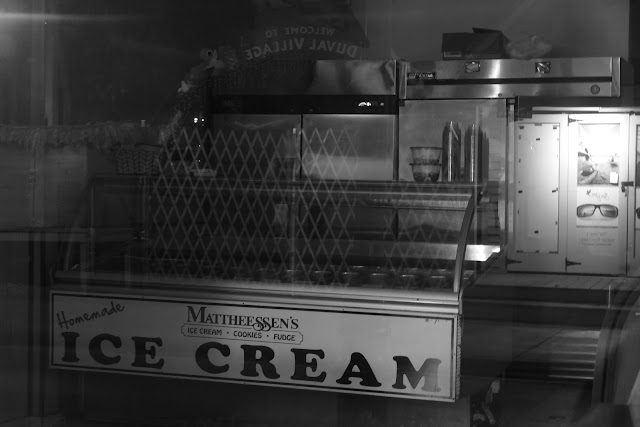 So for now the shops are closed, the restaurants are either closed or restricted to outside service and the town lumbers along like a ghost town. 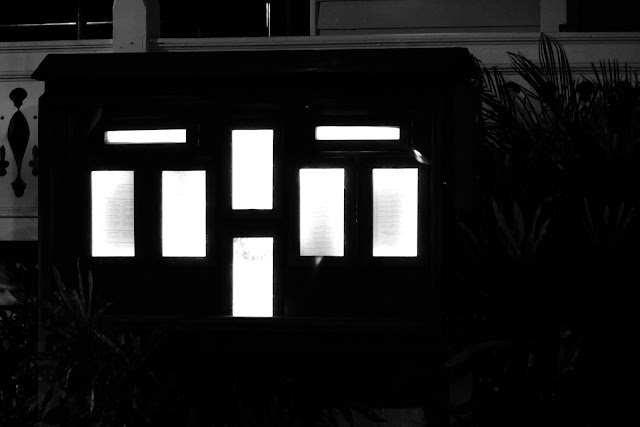 I spend my walks keeping one eye on Rusty who keeps an eye on me and together we meander empty streets and I dare say streets that have fewer interesting smells for a small brown dog to track down. 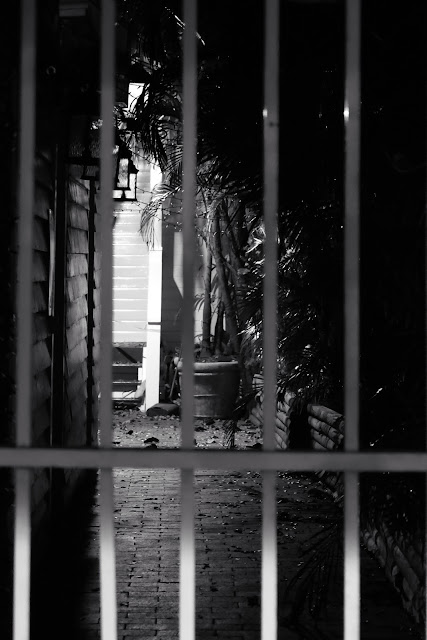 I expect there is less food for the wild birds too now that drunks aren't dropping pizza slices everywhere. 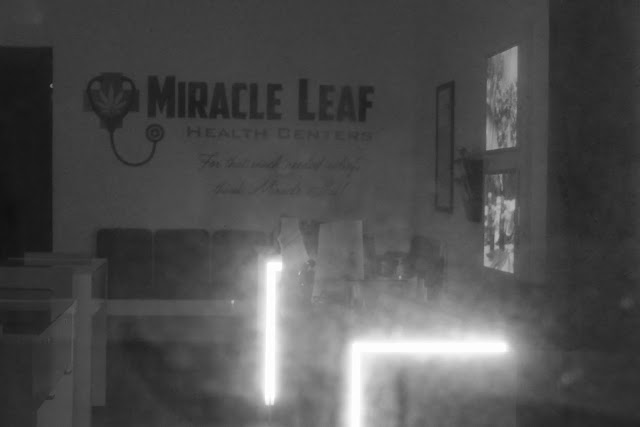 And even though the lights shine on in the dark the bills will come due at some point. 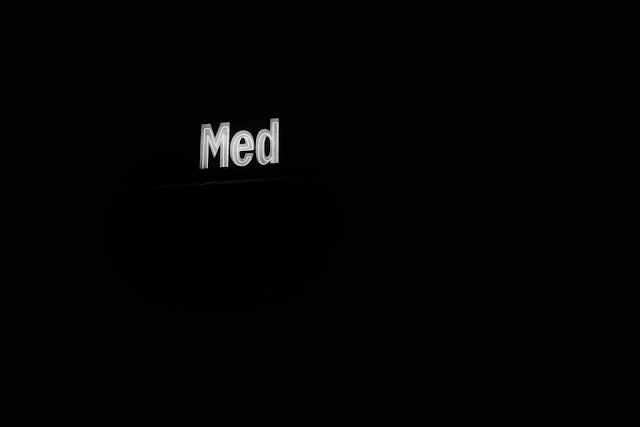 This dock line clamped tight around a cleat seemed like a good metaphor for our situation, hanging on for all we are worth until something changes. 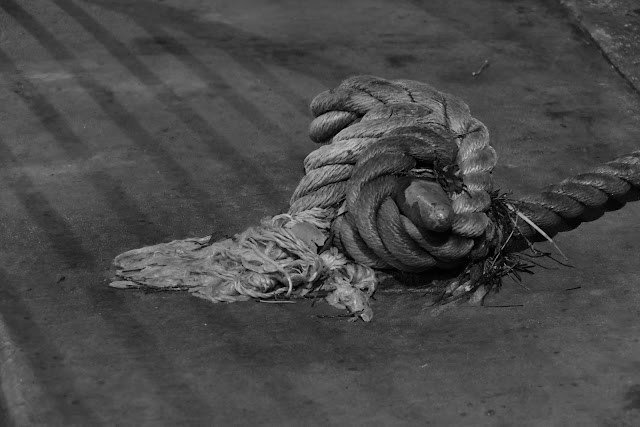 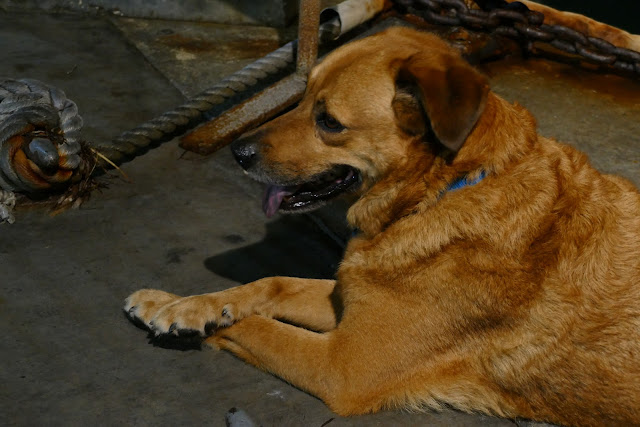