When my wife and I were out sailing in distant parts we carried a supply of bits and pieces and some vague knowledge of how to repair some stuff, all that and the faint fair hope that we could bumble through. Things broke and I bodged repairs and when the latest effort was finished we'd look it over and say to each other our favorite punch line: "Fixed; for now!" We never assumed any fix was permanent, things were always breaking on all the sailboats out there traveling through Central America. The best thing about the Panama Canal was the supply of easily accessible spare parts. Fixed for now was the mantra, and it's one of those things we've never quite forgotten. 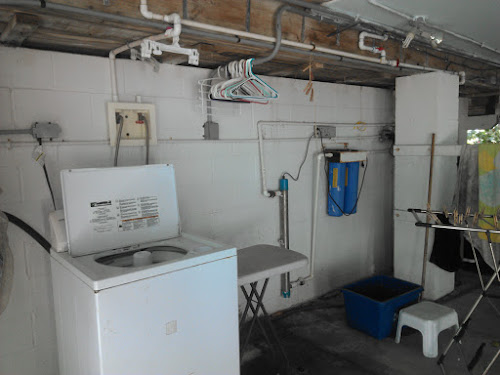 After a lifetime spent on boats bodging things I am a nervous, insecure handyman in houses and my wife likes a nice clean finish to a job in her home. Therefore when one of the PVC handles that switches the water supply between the cistern and the aqueduct broke and spewed water everywhere I decided to call in a professional. In the photo below the bottom right handle opens and closes access to the cistern and it's pumps, while the new big red handle on the left opens and closes the high pressure water from the aqueduct. I bought a house that can be completely supplied by rainwater collected off the roof, or from the main water supply piped to the islands from the South Florida Aquifer. The handle on the left was the replacement installed by a professional plumber at my request, after the original broke and leaked. 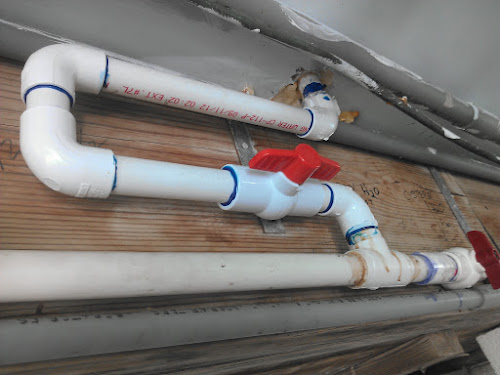 The plumber did the job while I slept and promised to come back and check his work and collect payment. He showed up a couple of days later unannounced just as Cheyenne and I got back from a walk (the one where the crazy lady yelled at me) and the plumber, who it turns out is also crazy, in a nice way, said there was a leak and he'd be back to fix it and collect payment. He never showed. I generally only use the aqueduct to operate the washing machine as the amount of water the machine needs taxes the cistern pumps so I open the aqueduct to do laundry and the go back to the better tasting rain water for the rest of the time. The leak was small but persistent so I decided to try a simple fix. Gorilla Glue to the rescue! 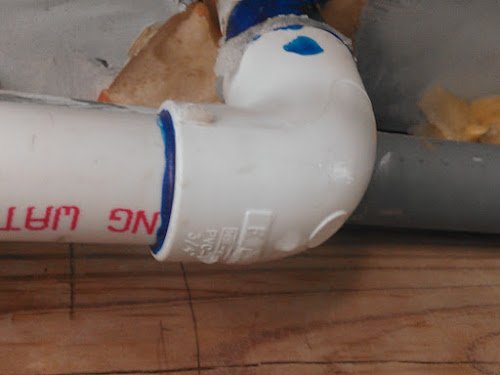 It failed and the water kept dripping like water torture as I washed my clothes. I pondered my options and decided first that there was no way I was calling the sad sack plumber back, after all he failed the first time, failed to come back and as the investment scams point out past success is no predictor of future returns- or is it? I figured I might as well give it a shot before calling another professional plumber, who most likely would be just as incapable of mastering the overwhelming task of successfully connecting PVC pipe. 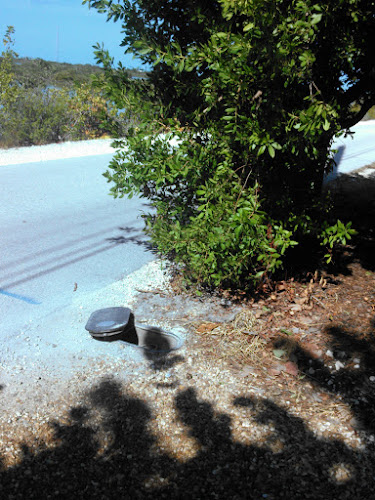 I figured what the hell and I started grubbing around in the aqueduct meter out by the road. The lid yielded eventually to my probing penknife and inside I found a ton of dirt which I slowly removed, handful by handful. Then I found the little round switch shown below at the top of the picture. A quarter turn and the water supply to the house was cut off. So far, so good. Boat bum becomes handyman. 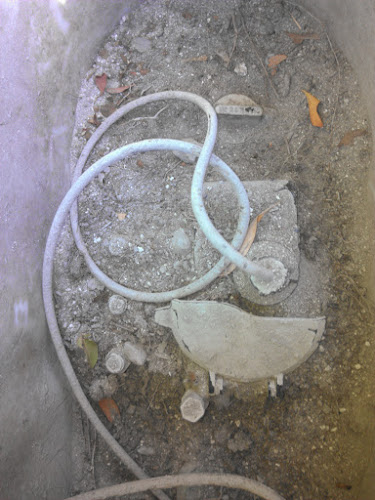 To someone used to this stuff it would seem absurd but I had to think about what I was doing every step of the way. The day after Christmas, Boxing Day, ACE hardware on Summerland Key was open so I scootered over there to pick up some supplies. I wish PVC was allowed on boats because its cheap and easy to work with but if it fails below the waterline the boat will sink so I had no experience with the stuff before we moved into this house which has lots of it. 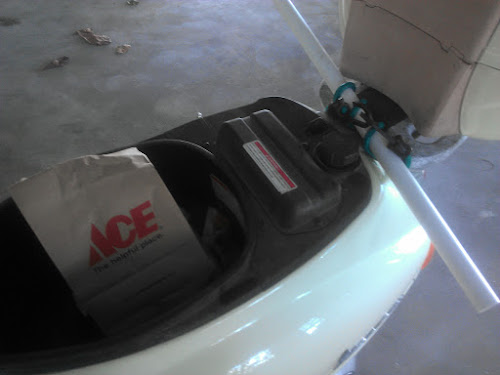 I have to confess I was swearing up a blue streak as I laid out tools, pipe, fittings and PVC glue. Across the canal I could hear Chrismas renters whooping it up in the shady garden alongside their side of the canal. I didn't even have my dog to keep me company and give sound advice as I planned where to cut and what to glue. Oh shit, I gulped and wedged the hacksaw blade into an impossible corner and started cutting. 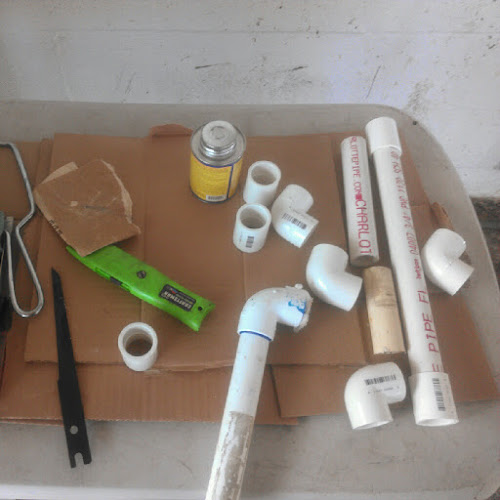 The reason why the plumber left a leak was because the pipe sticking out of the sheetrock was almost inaccessible. I got some pipe clamps on it and held down as far as I could and sanded the plastic. I had barely enough room for the joint and the corner pipe but I hoped for the best. Dammit I thought to myself, why can't people who know how to do the job come and set up shop in the Keys? They call it Keys Disease when you hire someone and they fail to show. You can blame alcohol drugs or an unhappy childhood but the inability to show up as promised is standard operating procedure in Paradise. Failing to complete the job is just as commonplace. 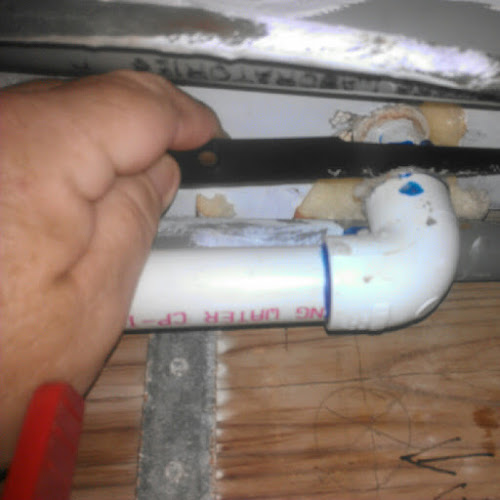 I hacked, sanded and glued with a will. I wanted it fixed by the time my wife got back from Alabama. I can do this I said to myself as I stood on my stool PVC dust drizzling onto my head. My repair spilled purple glue everywhere, over the joints, the pipes, my hands and my hair, everywhere. It was Ugly. 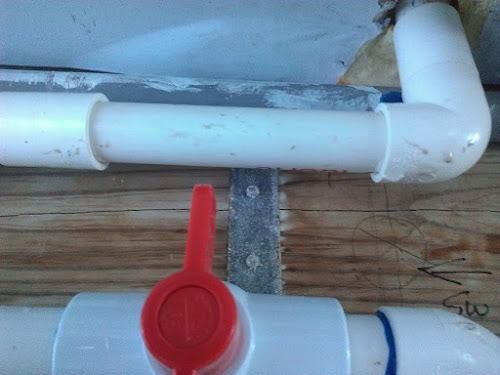 I dread the day my home takes a direct hit from a hurricane and I need professionals to do serious repairs on the structure. Victims of Wilma waited years to move back not their homes as Keys Disease ran rampant through the islands as repair people picked and chose their work and rip off artists made a killing. I couldn't get a plumber to connect some PVC pipe without drama and failure. Imagine if my bathroom were wrecked. So you really want to live in Paradise? Are you sure? 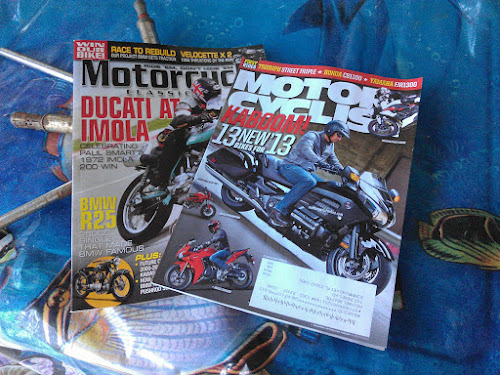 I opened the aqueduct yesterday and to my astonishment my joints weren't leaking. Victory! Sweet victory!! However let's remain rational...Yes it's fixed, but only for now.