Scooter In The Sticks

After I finished my 32 hour, 1500 mile Iron Butt ride I was in no way impaired to keep on riding. I attribute that to my rather fierce exercise regimen at home so when I was faced with a  five hour ride across New York and Pennsylvania from Niagara to State College I was actually looking forward to the ride. Mountains! Curves! No need to log every damned thing! Freedom! Yay! 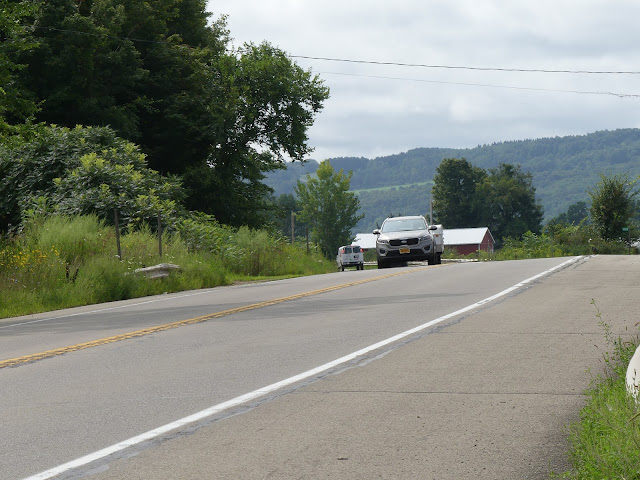 Besides all that I was going to meet a long time correspondent and I was a bit nervous. Among scooter riders Steve Williams is the author of a photo blog by a man who is a professional photographer,a  gentle soul who wouldn't say boo to a goose. My instructions were to meet at an historic watering hole in his village. 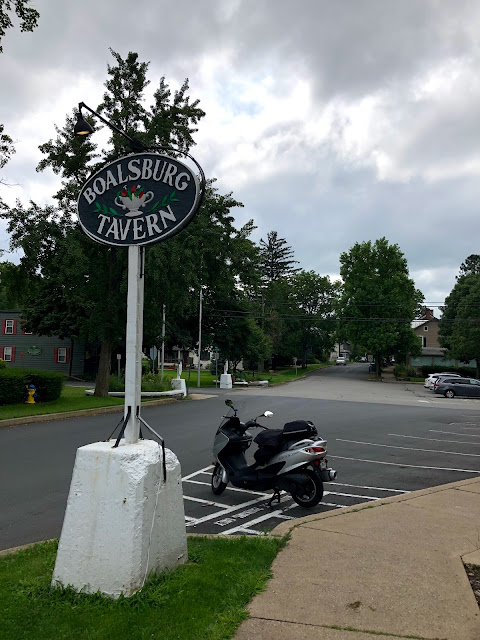 I was nothing loathe as I was curious to see if the local brew tasted the same at home as it does in Florida. No difference that I could tell. 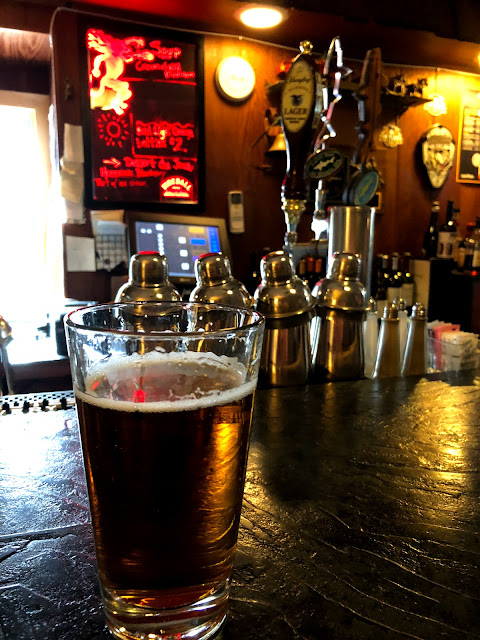 I was  wind burned and pleased with myself. And I was in Duffy;s Tavern which was a place I had been looking forward to seeing, even if I had misplaced my ears. 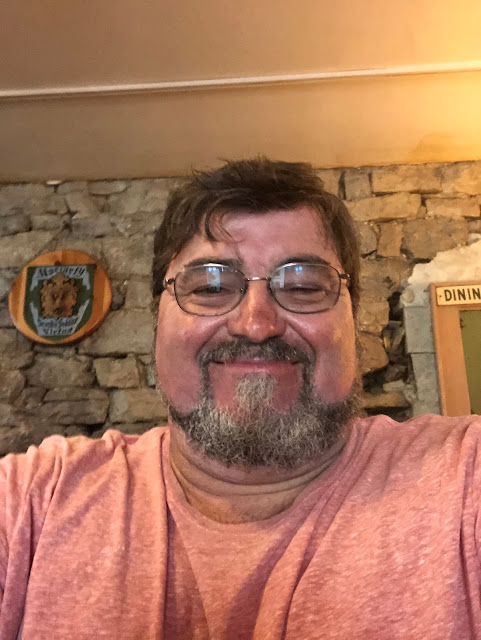 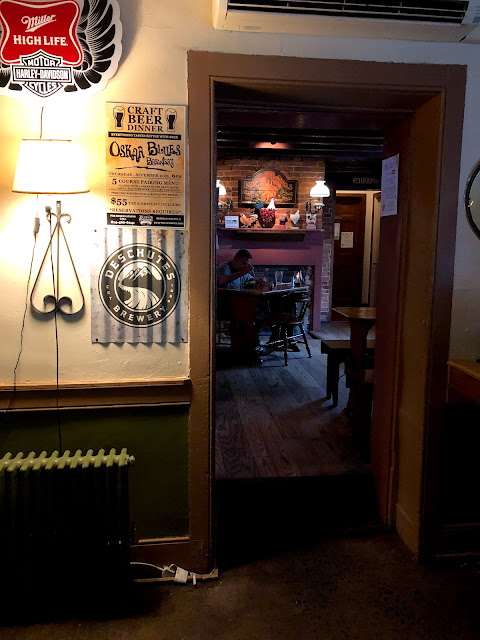 Steve showed up and we circled each other drinking beer and talking until eventually he took me to my quarters across the street. Boalsburg reminds me of the little New England town (filmed in California!) which is the setting for the Hitchcock movie "The Trouble with Harry." Steve remarked rather tartly there were no spare bodies floating around Boalsburg. I think they would have found such a thing to be in very poor taste in this delightful small town. 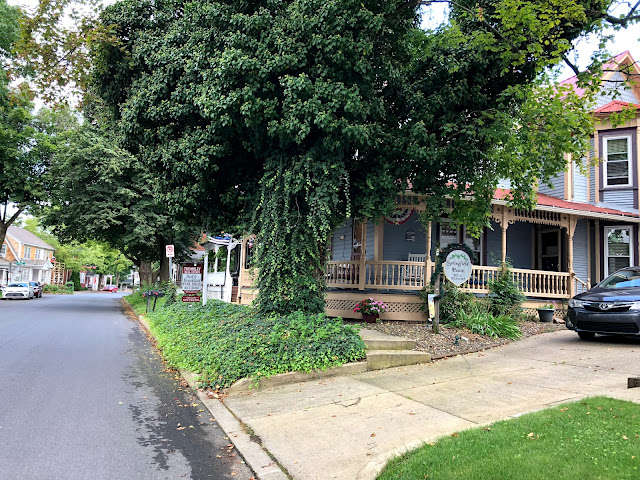 We drove and that was a thoughtful gesture getting the truck out,  as he probably figured my backside could use the break. Plus we could talk.  I was nervous I was going to piss him off with my odd sense of humor and eccentric view of life. I annoy some people all the time by my inability to take things seriously but luckily unlike those humorless souls Steve has a wicked sense of humor, he sees the droll in daily life and he sees absurdity all around him, including doubtless in me and my ridiculous Iron Butt ride... But he is still the thoughtful, polite easy going guy who writes his page, Scooter in the Sticks. It's funny really how different and how alike we are. 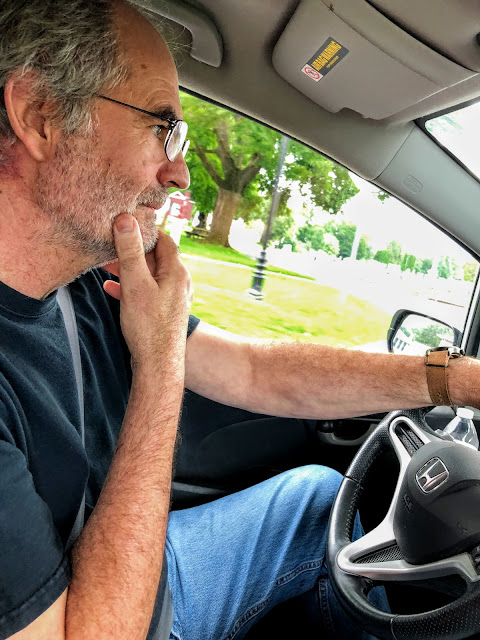 To me Steve represents the quiet steady voice of a man who has found his trade and his place in life without hesitation. He is a Pennsylvania native from Pittsburgh who came to State College for the education and stayed for the job. 44 years on campus as their photographer, a well liked presence at the university over the decades, followed by a secure retirement in the place he never wants to leave and doubtless never will. Shown here outside the exhibit I specifically came to see of his photographs: 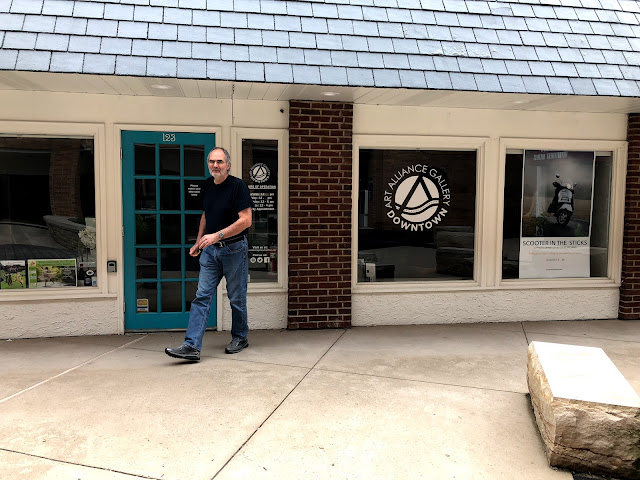 You can check his pictures properly on his website and they are worth checking out. Steve got quite a lot of attention from the show and he said civilians wanted the ones without the Vespa which is interesting to me as in my head and other scooterists' he is the Vespa! I unashamedly wanted to crib his technique because his photos are compelling and I couldn't figure out why. 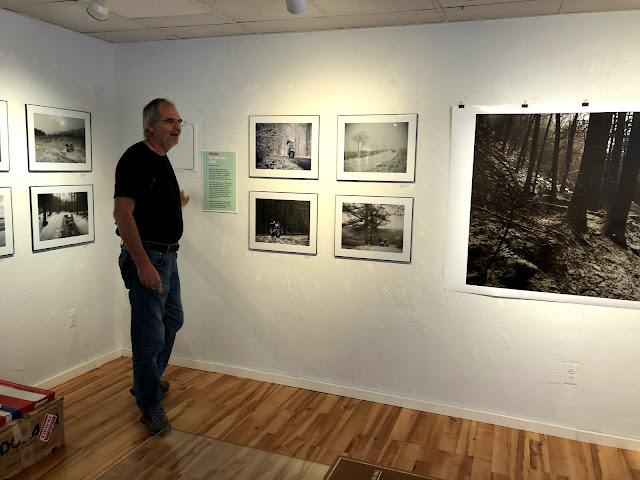 And there you have it: he is a professional photographer from the era of paper and  and chemicals, he is established and settled, and I am a brash amateur and and as rootless as it's possible to be. But I do have one thing over Steve. Not photography for sure: 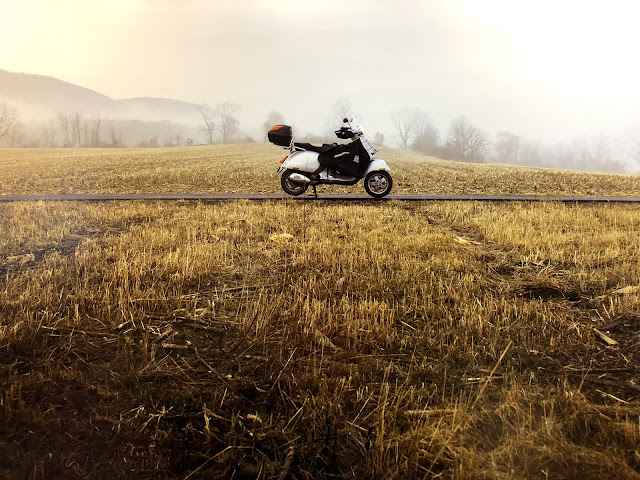 I am a traveler and inside this man, who saw his picture and described himself as grizzled, and liked this one because it made him look tall (he is tall from my perspective), Steve wants to travel. He has obligations, his wife needs him near home and he has never had the get up and go to be gone. But he idles his time pondering riding a motorcycle or hitting the horizon. Stuff I've done and would love to accompany him on a trip. 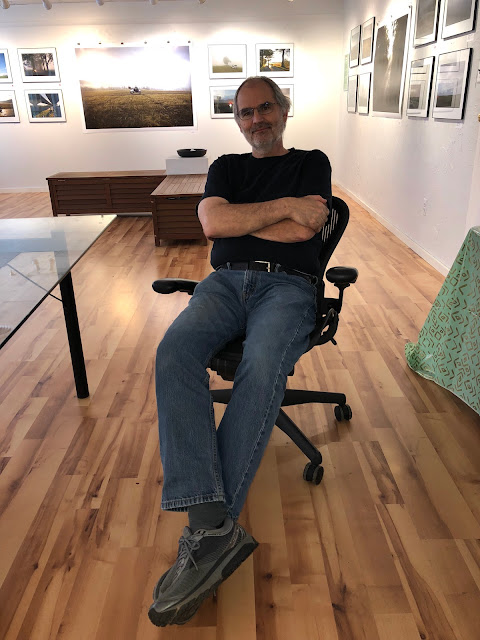 I did get a few photography tips and they are in my head all the time but I have to break my own bad habits which is what I've been working on now I'm home. 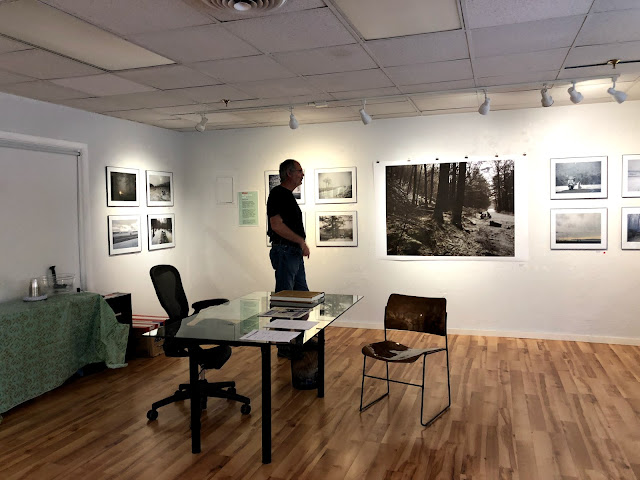 We cruised State College and his alma mater. It turns out the University founder put in a clause requiring that dogs have free rein on campus. Really. I need to bring Rusty to get an education. It turns out nowadays they have to be on leash but that was not always the case. I like this place. Plus they were dancing in front of the main building. 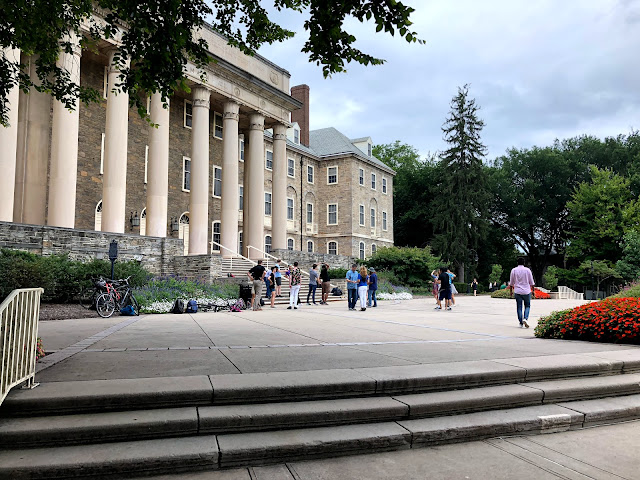 Steve in his world, a city filled with young people bars, shops and a welcoming downtown. He like me likes to come out ion the middle of the night and walk his dog here. Before he got fed up with me I think we could have a grand time together. 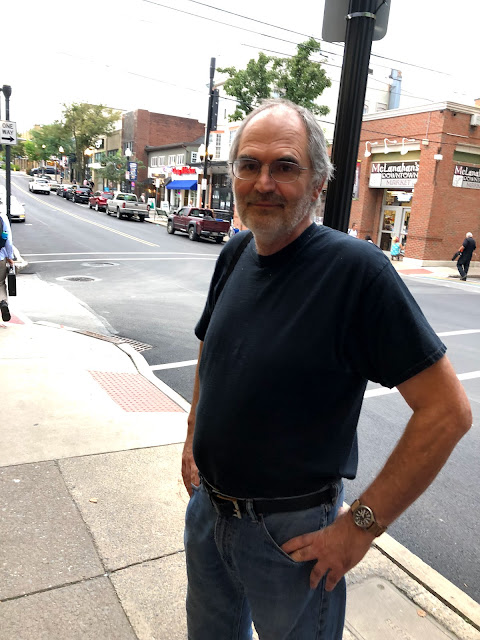 This is the store front of the worlds largest educational toy shop that sells stuff by mail order. Something like that. A local success story. It looks pretty modest which is I gather the point. 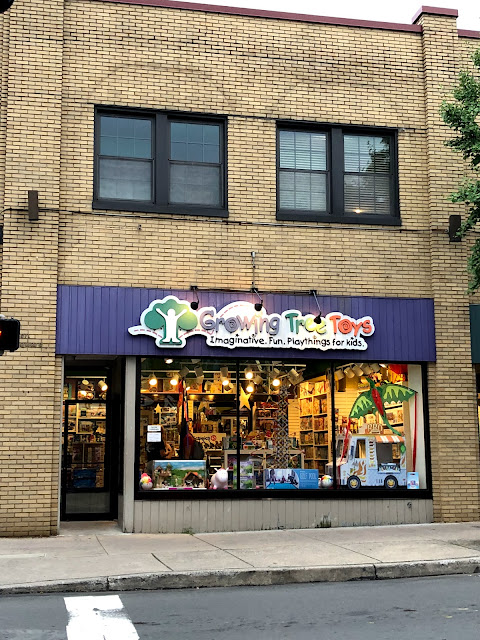 If you read his blog the Saints Cafe features so we did the obligatory photo but it was closed so I couldn't have the iconic tea and bagel.  But I've been there! 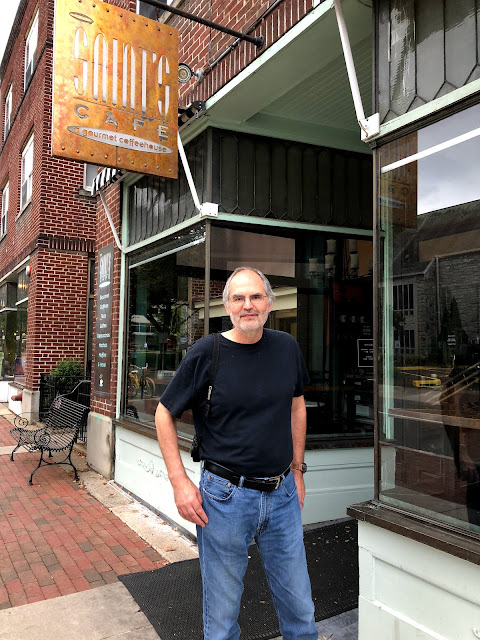 My bed and breakfast (dog friendly please note) was super luxurious and I slept like a log after meeting Kim at Steve's house. But I awoke to a crappy wet day. I mentioned to Steve he didn't have to get on the road but he replied over the phone that wet foggy days are best for photography. Lunatic. 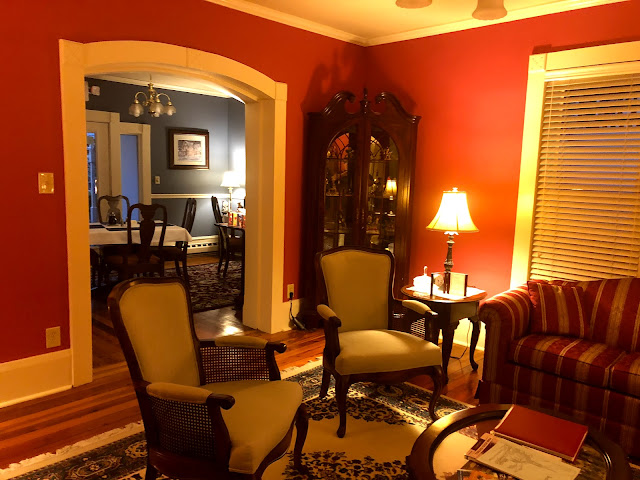 We rode off and all I did was follow him. We stopped at a fogged in overlook me feeling like I should be cold but wasn'ty, he looking like a martian: 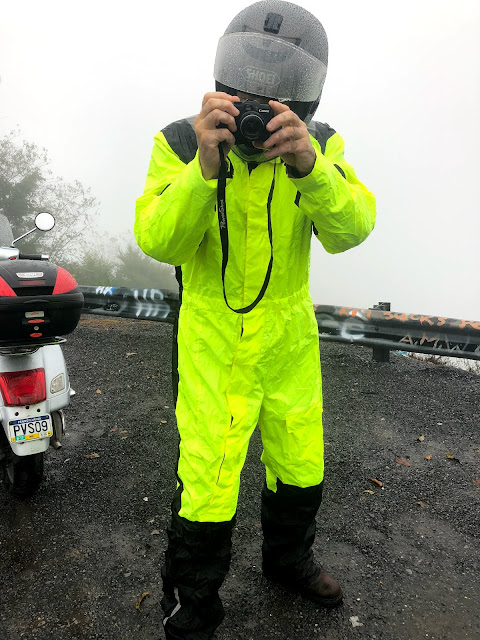 Scooters in the fog...I had it all this trip. Steve is very shy about his riding style which is slow and requires much stopping but this was our first time riding together so he gave me the conventional treatment and we wandered up hills and down dales winding and twisting through forests. He pulls over for cars and lets them by which I found quite relaxing as the roads were not terribly crowded and people don't drive like jacked up Floridians with much aggression and low skill. 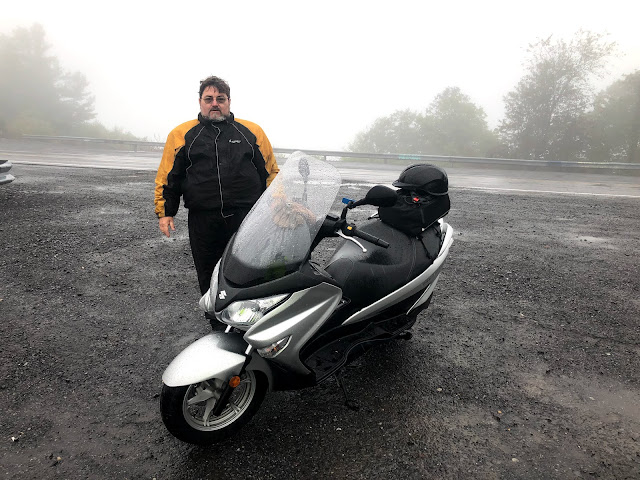 I guess not yet having met God I must have more road to ride. Steve had wanted to get the picture of the barn for a while so I was glad to be the catalyst for the encounter. 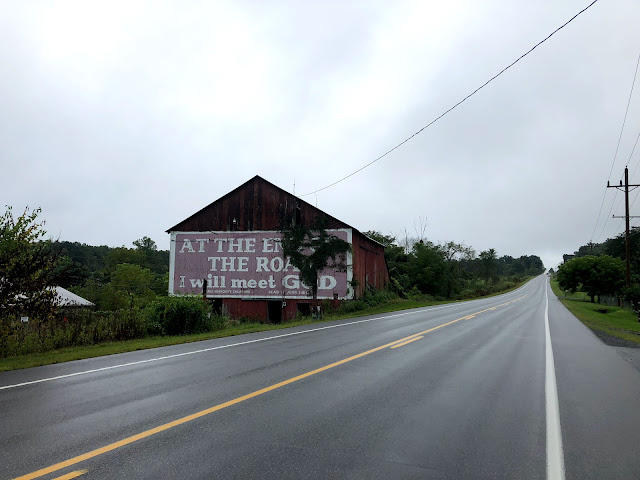 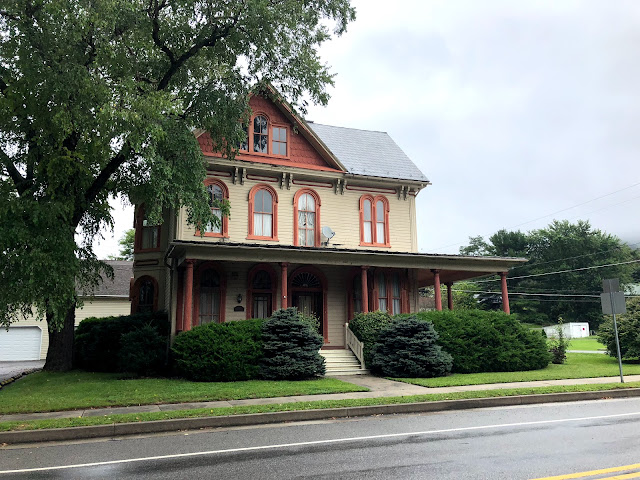 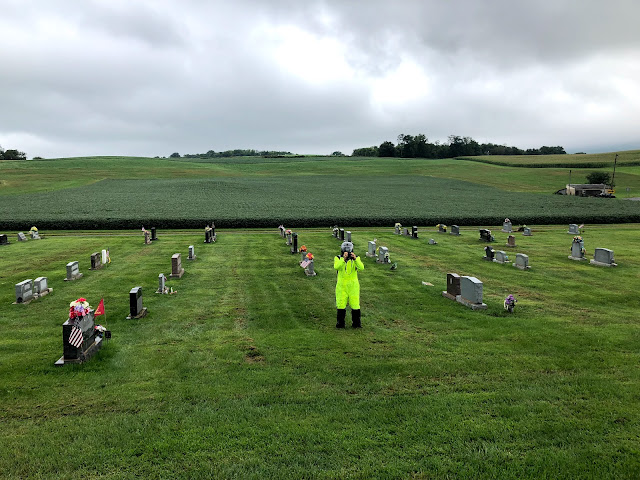 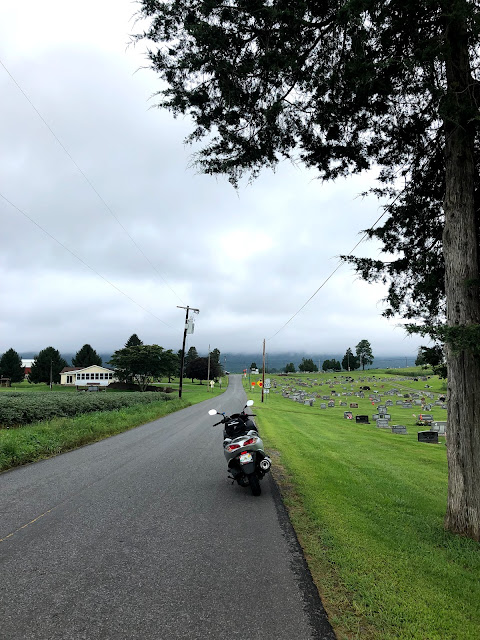 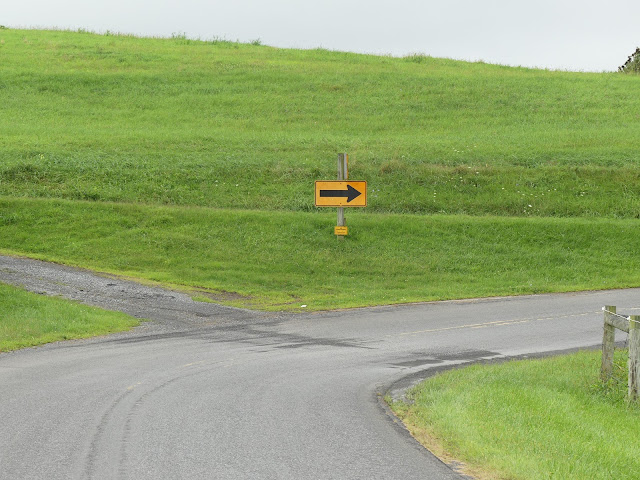 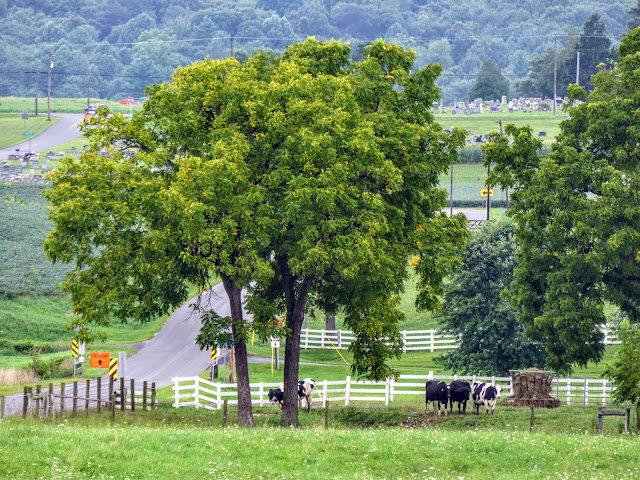 Hagerstown Maryland was quite industrial once I believe. We stopped here for lunch,   disrobing like monks, layers coming off one after the other and then we tried stretching out the lunch as long as we could. 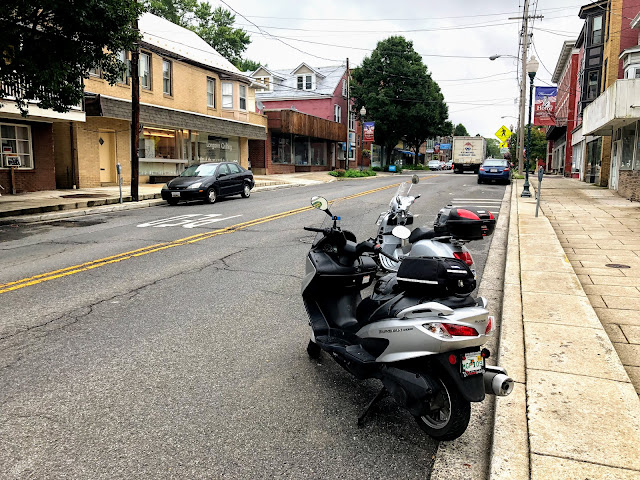 I don't think either of us wanted to part. It was a sensation that was to repeat itself as the ride south continued. I wish I didn't live so far away. Steve felt like an elder brother with so much to teach me, about cameras and thoughtful riding and life itself. 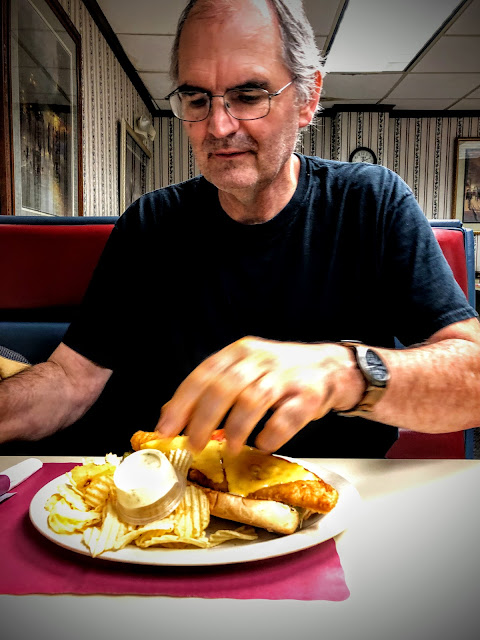 I cannot wait to go back and dither around Mt Nittany until even Steve gets bored.
Posted by Conchscooter at 12:00 AM 3 comments: Links to this post