I had the rare pleasure of commuting the wrong way this past week, only it didn't always go as well as it might have. At Mile Marker 39 on Monday afternoon on the way home we got stuck in traffic. 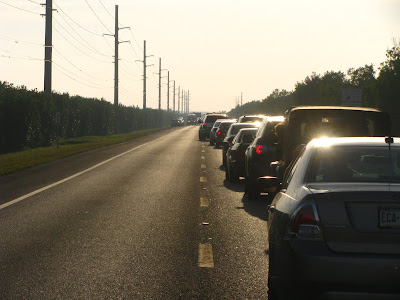 It seems an elderly couple managed to roll their van into the mangroves on this exceptionally long straight stretch of road. Luckily for them they must have been wearing their seat belts as the ambulance took them away but the road opened up after a mere twenty minute delay. 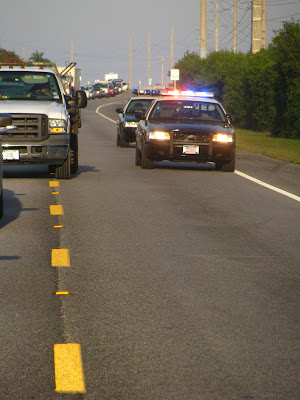 It was aggravating that there was no bicycle path along here else I would have had the chance of pushing my motorcycle along it to get around the blockage. As it was I had to sit in line with all the cages and wait for things to resume normal operations. Just one of the disadvantages of having but one highway to roll along. I sat there and envied the push bike: 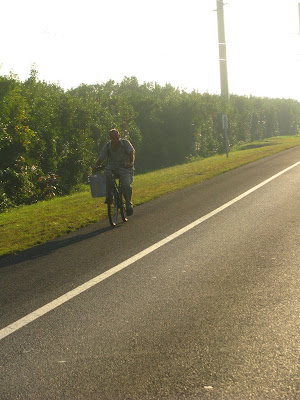 I had been in Marathon all day for a dispatch class with some colleagues and the next day when we reassembled they were bitching about the delay in getting home. I was none too pleased as I should have been 25 minutes away from my waiting dog but it took me an hour almost, to get home. Nevertheless like I told the youngsters... it could have been worse. 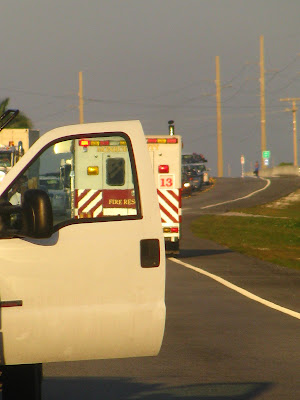 I had been following Lisa when we got stuck. She was all over her phone to warn her family of her delay. I didn't bother to call anyone as Cheyenne hasn't learned how to answer the phone and my wife had a staff meeting. 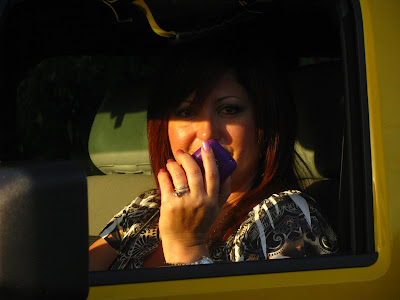 Some other people were ready to wait out the delay in comfort. 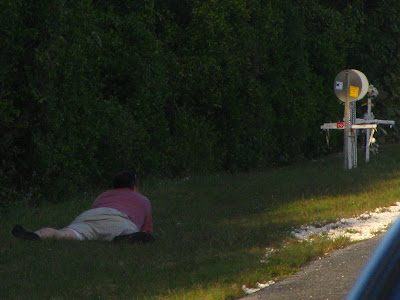 Finally we got rolling again and traffic was moving pretty fast as though to make up for the involuntary pause. It was still sunny when we stopped at the red light in Big Pine Key: 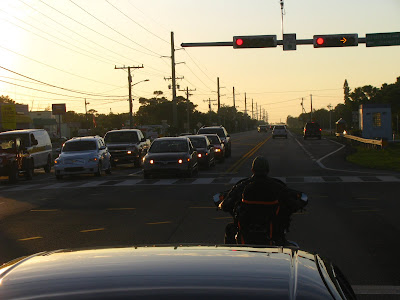 The class took three days in the state building in Marathon 22 miles north of my house. It was rather odd for me to be getting up before dawn- God I hate alarm clocks- walking Cheyenne and then spending all those precious sunlit hours sitting indoors learning the latest medical dispatch techniques.

Our instructor Ray was born in Key West but has lived his life in Miami working in Fire/Rescue in the Big City. He likes his phone too.

Kristi has a modern full service phone and she uses it.

As do Karl and Fred. Fred thought I was hilarious documenting all my neighbors busy with their telephone applications. "I'm Facebooking," Kristi said indignantly, also stabbing proper use of English through the heart with a newly minted verb.

"You're like my sister," Karl grumbled. "She's always taking pictures of everything." Funnily enough she should because Key West as I always point out is changing all the time. Even more funny Karl, Kristi and Fred are all Conchs, though Kristi denies it saying she moved to Key West when she was three. I say if you graduate Key West High School you're a Conch (a Key West Native) as high school is what seems to form most Americans as adults. Karl and I agree that anyone who pronounces Conch as "consh" might as well be running their fingernails down a black board. "I hate that," Karl groaned. He grinned at me and added: " I tell them the 'h' is silent!" When I managed to stop laughing I decided there and then I would adopt that same line. Thus in the word Conchscooter, the 'h' is silent. Works for me. 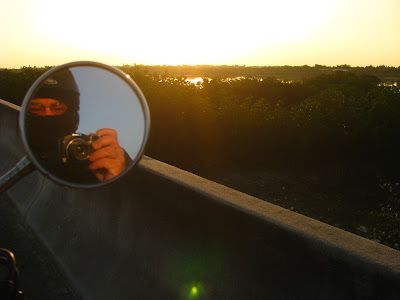 Commuting to Marathon in the early morning put the sun directly in my eyes, which was okay as the views were really quite pleasant. The ride is faster than that to Key West as more of the road between Big Pine and Marathon is 55 miles per hour and there are lots of opportunities to pass. On the way home it was easier for me to snatch a few pictures as I had no deadlines. Winter is really quite lovely when it is as calm and sunny as this: 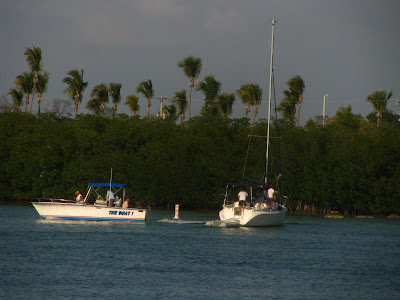 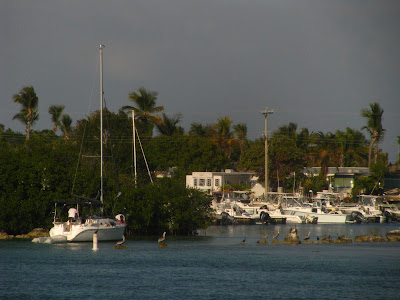 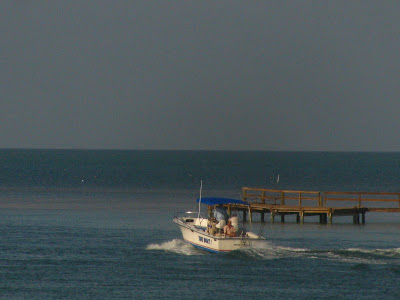 The old Flagler bridge turned into a bicycle path and fishing platform: 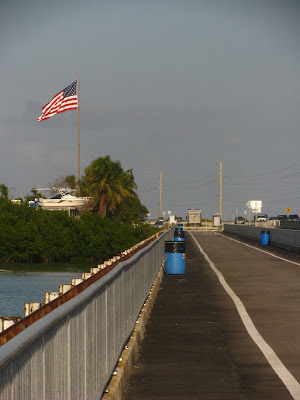 The Bonneville is the ideal commuting vehicle as far as I'm concerned. 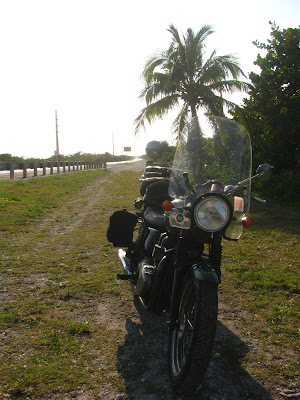 So after three days of classes I re-certified myself as an Emergency Medical Dispatcher and resumed normal scheduling, a couple of nights of work and a weekend off. I am a lucky worker bee and anyone who calls needing CPR over the phone will be glad I took the classes. I've done it before but the protocols have changed so I will be all up to date and ready for anything now. As it should be.

Posted by Conchscooter at 12:01 AM 12 comments: Links to this post