I had asked Robert to give me a hand to get my boat on it's trailer. When we moved to Cudjoe Key from Ramrod the nature of our life on the water changed. On Ramrod our canal emptied all the subdivision into Newfound Harbor where on Cudjoe we live on a canal hardly used it is so short. On Ramrod we had lots of boating destinations in the bay where we could anchor and swim with splendid views. On Cudjoe we have no destinations on the shallow bay worth boating to within 20 minutes of our house. So we swim in the canal and enjoy the water next to our home. Quick and efficient. Thus our boat has had no use for a year or so since we got bored with Cudjoe bay. 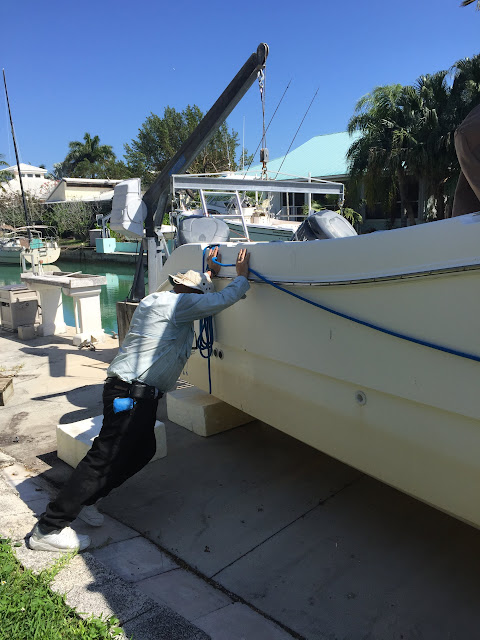 Robert too has been busy in retirement and when it became evident my little skiff wasn't moving without some attention we decided to get his World Cat in the water and get the job done with a tow. My house is across the bay from the haul out slip in Cudjoe Marina. It turns out Robert hasn't been pleasure boating himself for a many long months... 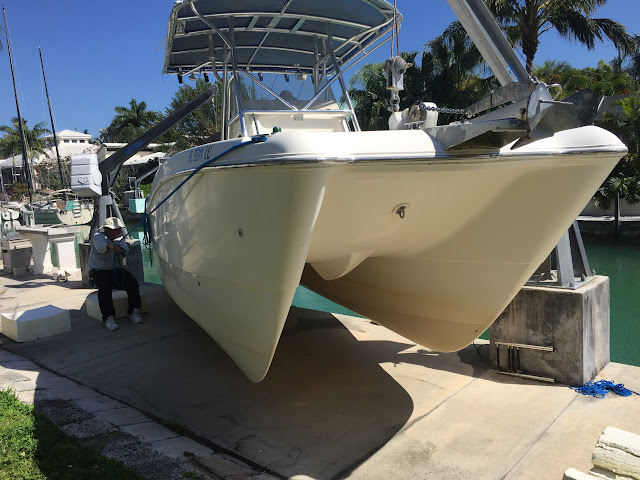 So we slowly launched the big heavy boat (Robert worked and I pressed occasional switches) and discovered one battery was dead. 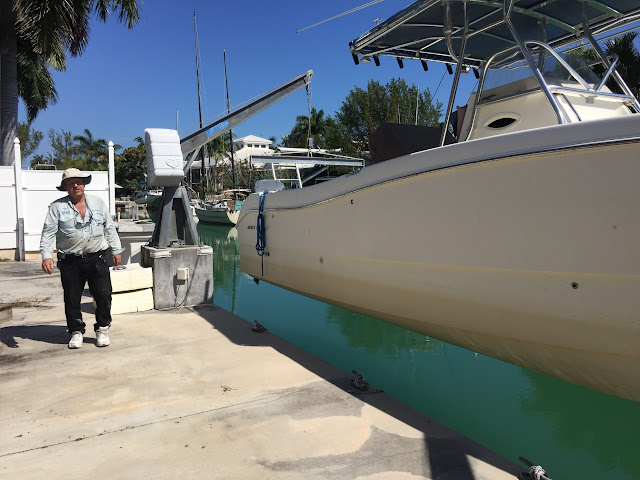 While Robert cleaned the leads I introduced Rusty to the boating life. And he was mighty reluctant, so much so I had to hunt him down and carry him to the accursed boat and lift him in. If I didn't leash him to the boat he fled ashore. It was hot work and took three goes to convince him I wasn't trying to kill him, though he was never sure throughout the ordeal. 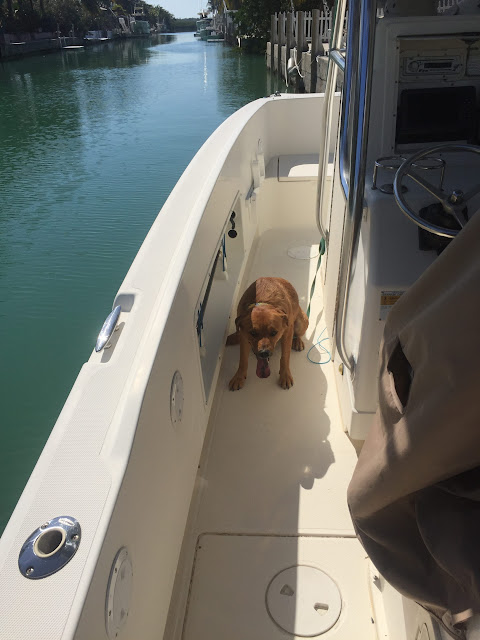 The battery was taking a  charge, Robert refreshed himself with cold water though Rusty refused his on the grounds drinking might kill him, he was that paranoid by now. 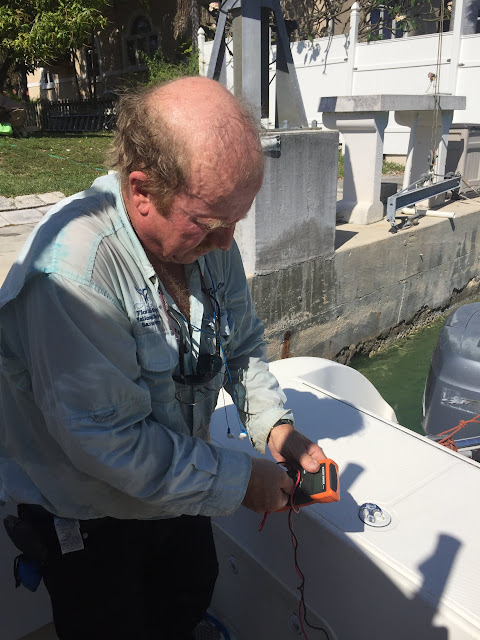 We crouched on the rather comfortable front seat and Rusty watched Cudjoe Gardens float serenely by as we left the safety of land. 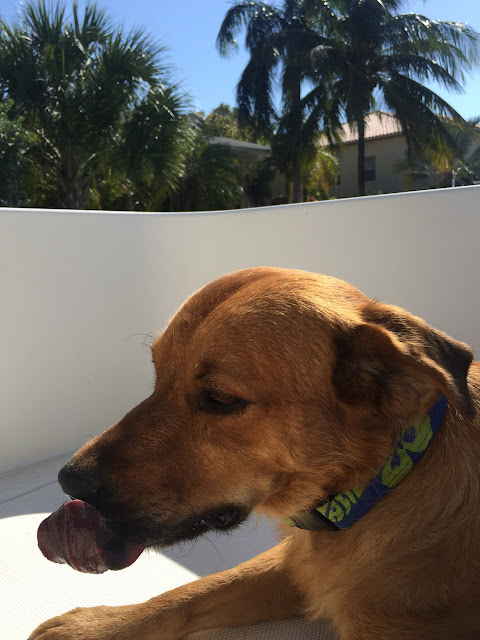 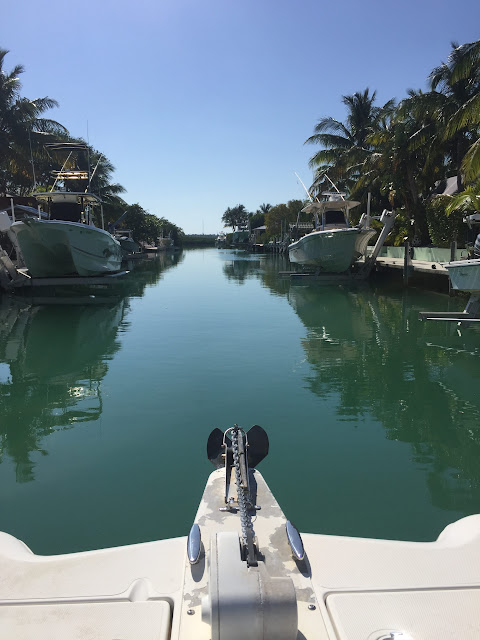 Robert's brute, Salty Dog was entirely at home trotting round making sure everything was okay leaving my quivering lump of fur slobbering pathetically on my leg. 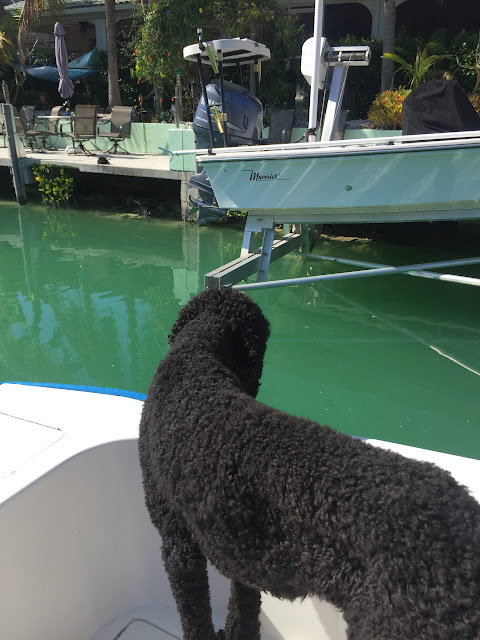 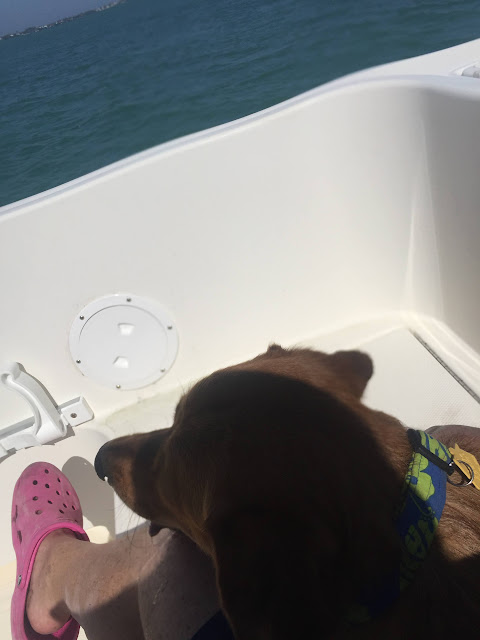 It was a lovely afternoon with a cool fresh breeze to take the edge off the heat. 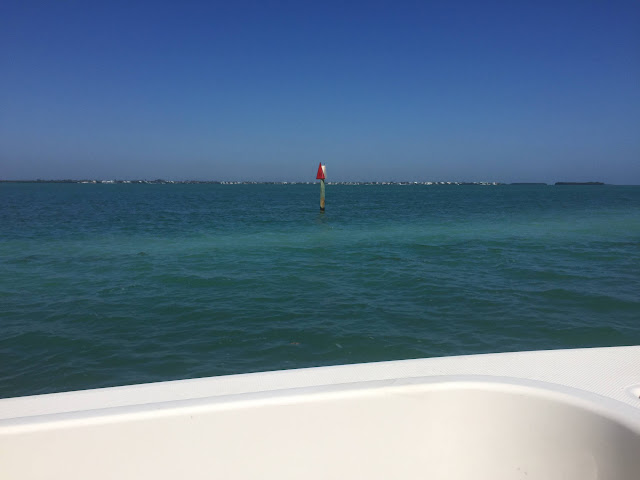 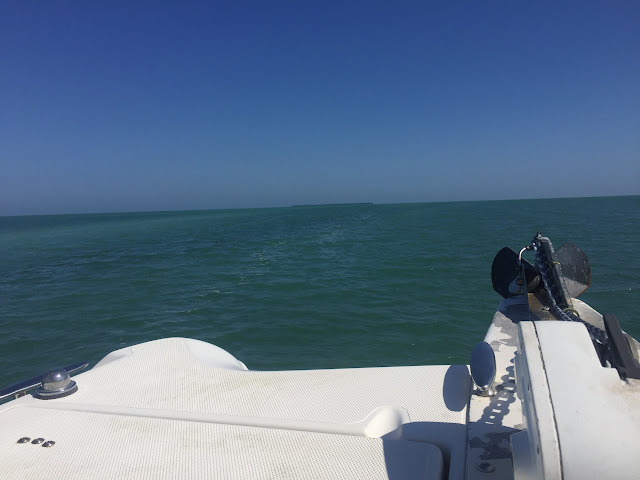 It was awkward holding my dog with one arm around his waist, partly to reassure him and partly to reassure me he wouldn't make a break for dry land. Had he not been so terrified it would have been companionable, as though we were on the couch at home. 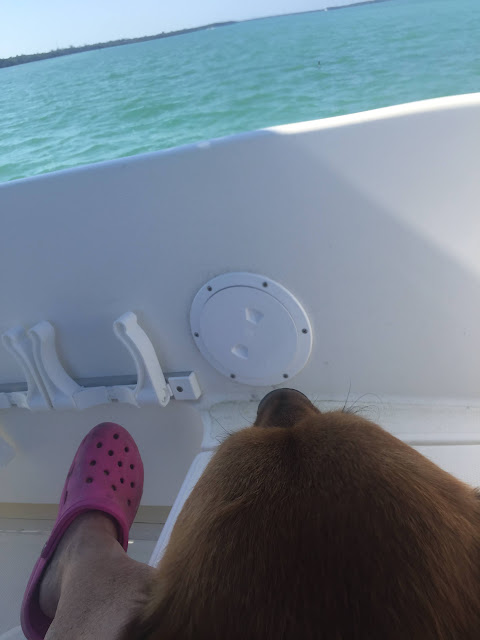 We took less than twenty minutes to chug down Robert's channel, cross the bay and approach the entrance to my canal. 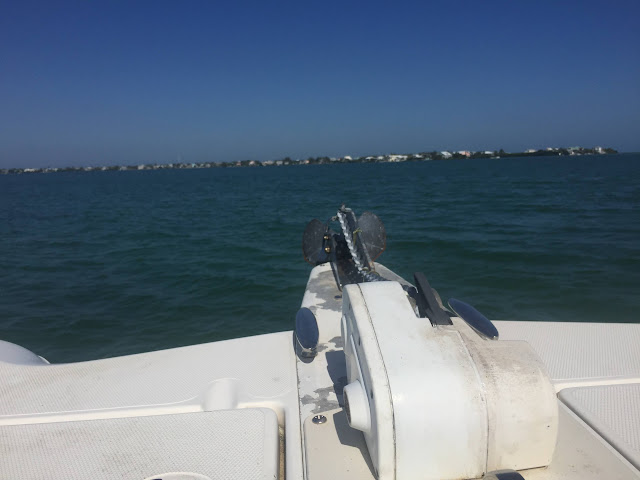 Naturally Salty Dog took an interest in our landfall. 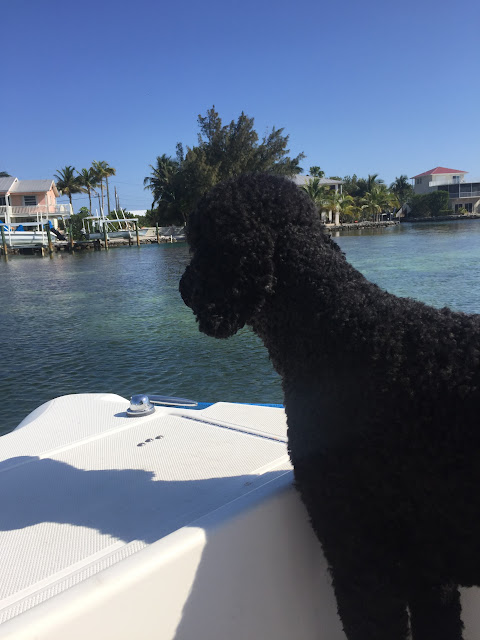 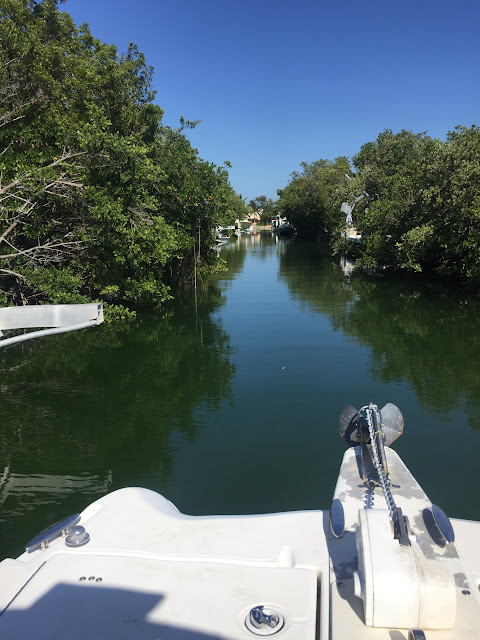 Home sweet home. I helped Rusty off the boat and he darted for the stairs. The last I heard the dog flap clattered and he was gone. Which was a relief. He hadn't drowned, I hadn't got wet apart from sweating copiously, and now I could focus on getting my immobile skiff to the boat ramp where my trailer was waiting. 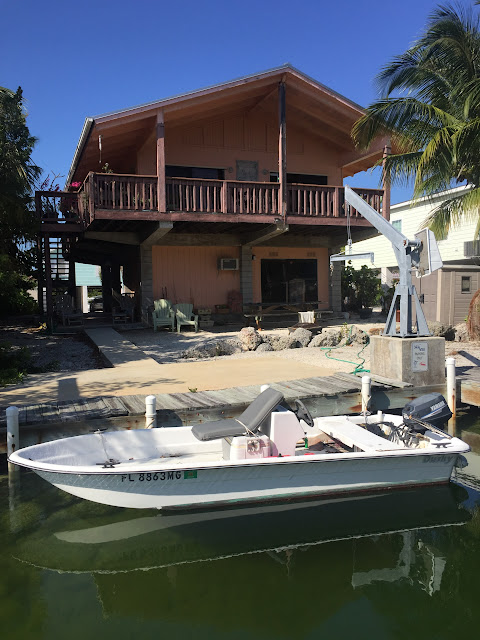 At fourteen feet my little boat was easy to tie off and drag back across the bay to the marina. It was a walking pace job and we chatted as we went. I suggested we take the dogs (poor Rusty) and sandwiches to an island forty minutes away for a walk one day soon. Robert wanted to take a full on picnic with grill and meat. He is much more the organizer than am I. 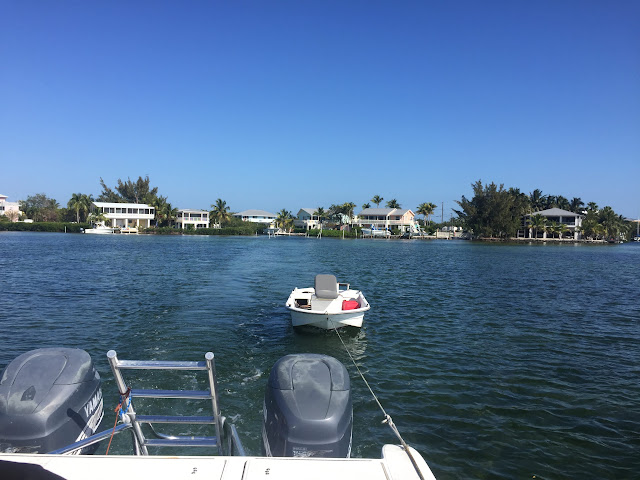 This kind of day is perfect: Circumnavigating Cudjoe 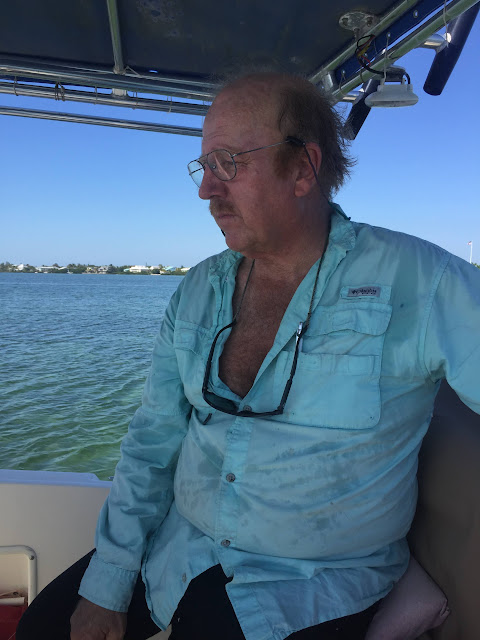 But this wasn't at all bad: 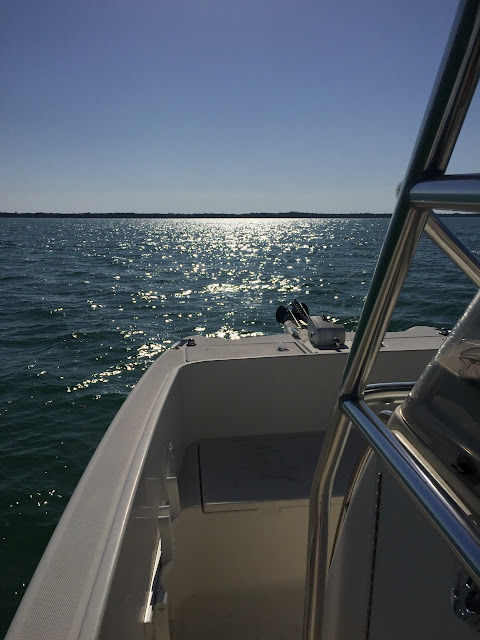 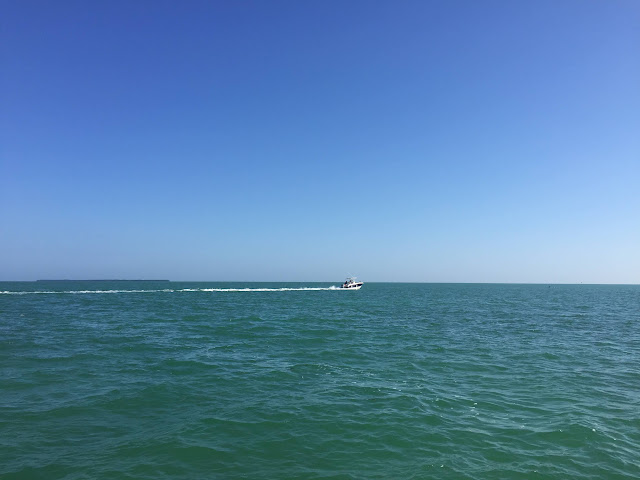 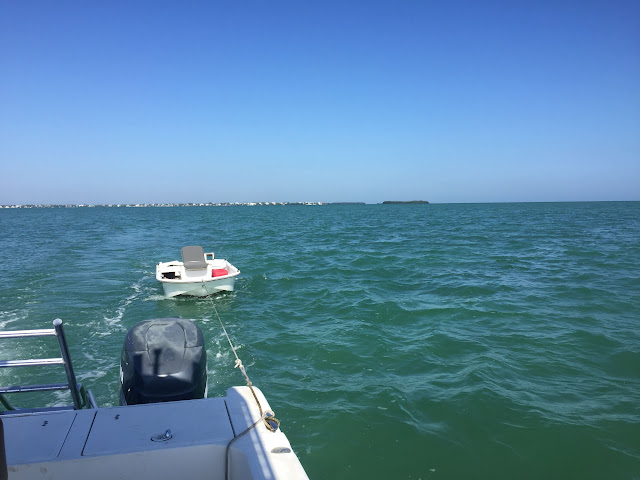 Pulling the skiff out of the water onto the trailer was a little too involved for photography but in the fullness of time I got my seven dollars worth of marina  ramp hauling fees and the boat was on the trailer which we had parked here earlier in the day. Robert and Salty Dog went home around the corner on the World Cat. 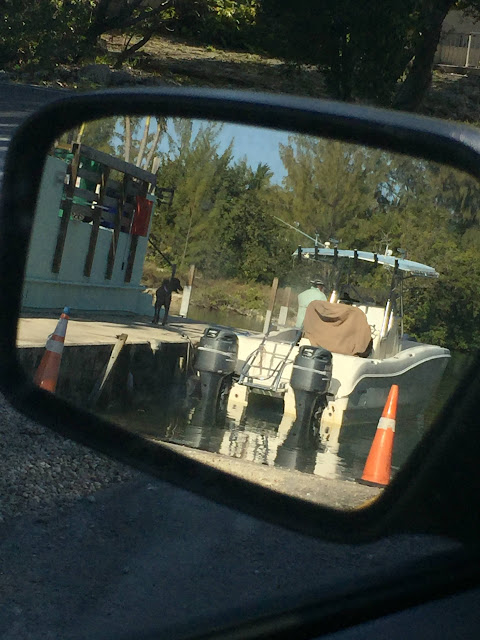 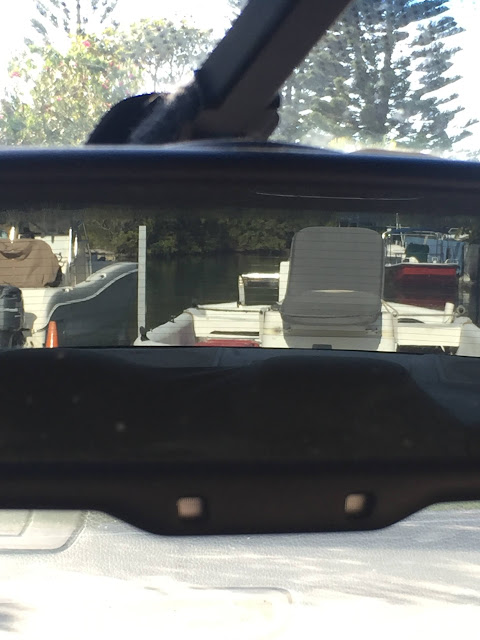 I backed the boat into its resting place, trying to convince myself of the value of boating these turquoise waters despite the endless maintenance and salt water corrosion. It was a relief to see it parked securely on the trailer though... 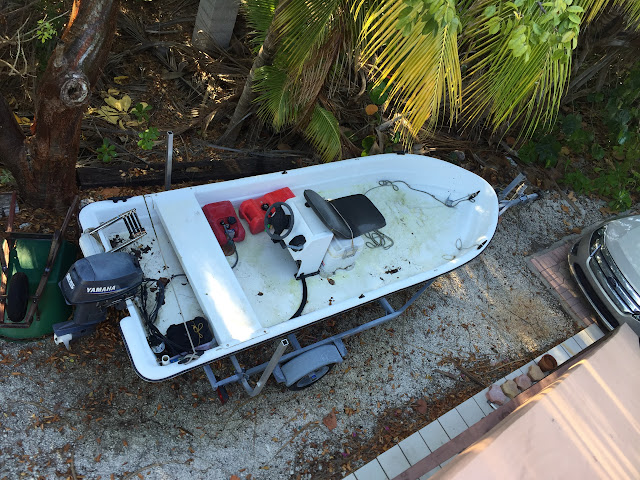 Young Rusty was glad to see me wagging his tail shyly and I made a fuss of him before he retreated to his safe place to sleep off his jangled nerves. 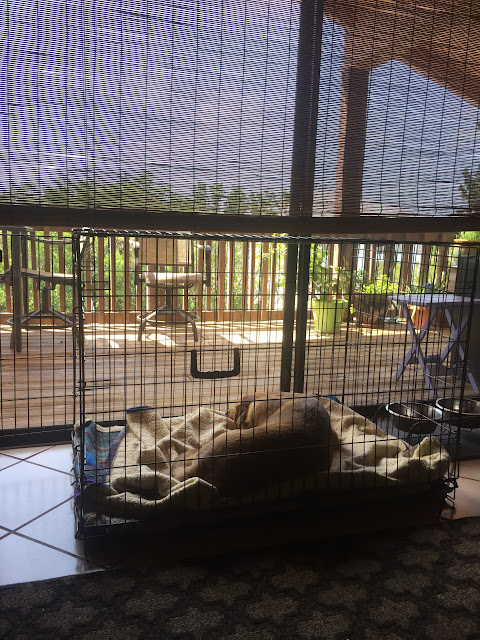 Yes I do  want less stuff but it sure was nice being out on the turquoise water. Hmm I need to think about this.
Posted by Conchscooter at 12:00 AM 3 comments: