AIG has a lengthy history of producing some of the biggest tools on Wall Street. Former CEO Maurice "Hank" Greenberg was considered one of the world's preeminent unapologetic narcissists even before he sued the government for providing an insufficiently generous bailout. Joe Cassano, former chief of AIG's financial products division, was another. First, he arrogantly blew off the accountants who warned him his portfolio of hundreds of billions in uncollateralized bets might destroy the world. Then, after it all went kablooey, he tiptoed back to D.C. (after first being assured of not being prosecuted, mind you) from his lavish four-story townhouse in London just long enough to tell the Financial Crisis Inquiry Commission that he hadabsolutely nothing to be sorry about and they could bite him and his hundreds of millions in earnings if they disagreed.

Now a third AIG executive enters the pantheon of tone-deaf AIG bigwigs: CEO Robert Benmosche, who just told the Wall Street Journal that the post-crash public outcry over the use of bailout money to pay bonuses to executives in Cassano's Financial Products unit was comparable to – get this – lynchings in the deep south. From reporter Leslie Scism's interview:

The uproar over bonuses "was intended to stir public anger, to get everybody out there with their pitch forks and their hangman nooses, and all that – sort of like what we did in the Deep South [decades ago]. And I think it was just as bad and just as wrong."

For sheer "Let them eat cake"-ness, this ranks right up there with Lloyd Blankfein's "I'm doing God's work" riff and Berkshire Hathaway billionaire Charlie Munger's line about how it was proper to bail out Wall Street, but people in foreclosure should "suck it in and cope." A few notes:

First of all, any white guy anywhere, rich or poor, who steps out in public wearing the mantle of 400 years of black suffering instantly shoots to the very top of the world asshole pyramid. Most white people grasp this instinctively. If they don't already teach it in kindergarten to make sure the rest get it, they ought to.

But when you're a white guy who just presided over a year of declining across-the-board sales but got a 24% pay raise anyway, to $13 million a year, largely because your company is invested in a market that's overheating due to massive Fed intervention, and you're so grateful for your cosmic good fortune that you immediately go out and publicly nail yourself to the cross of black victimhood – and not while stone drunk and with buddies at a bar, mind you, but sober and sitting in front of a Wall Street Journal reporter – that's like a whole new category of asshole. Try to compute just exactly how obnoxious that is – you'll be doing it until the end of time, like someone trying to figure pi.

Benmosche's nooses-and-pitchforks fantasies have their origins in stories about some AIGFP executives who were made to feel uncomfortable by angry crowds on their way home from work, and one about a teacher somewhere in the Midwest who ridiculed in her third-grade class a child whose father worked at the firm. That last bit of course would be very wrong if it did happen, and it may very well have.

Still, comparing being leered at on a train for continuing to collect a huge undeserved bonus from the taxpayer to being taken from your wife and family and hung from a tree for no reason at all is preposterous on at least a hundred different levels. Benmosche then doubled down on his crazy-spasm by explaining that part of the "lynching" involved the great unwashed trying to cheat those innocent AIGFP employees out of money they needed – money they needed, Benmosche explained, not to pay their bills, but to live beyond their bills:

Now you have these bright young people [in the financial-products unit] who had nothing to do with [the bad bets that hurt the company.]. . . They understand the derivatives very well; they understand the complexity. . . They're all scared. They [had made] good livings. They probably lived beyond their means. . . They aren't going to stay there for nothing.

It's a minor part of the story, but this whole notion of angry meanie taxpayers ignorantly trying to rob the poor AIGFP employees out of their hard-earned bonuses was always a fiction.

Those FP workers would normally have been counting on performance bonuses, but since AIGFP not only didn't perform that year, but created a historically bottomless suckhole of losses that nearly destroyed the universe, there were, alas, no performance bonuses to be had.

So management cooked up a bunch of "retention bonuses" for many of the unit's employees. This always seemed like a scam, a way of yanking a little last bit of value out of a company most thought was headed for collapse. Moreover, the notion that anyone (but especially the taxpayer) needed to pay millions in "retention bonuses" to prevent other financial firms from poaching employees of the biggest financial disaster/PR-cancer firm since Enron or Union Carbide – and this at a time when mass layoffs on Wall Street had flooded the labor market with thousands of other highly-qualified financial professionals who would have taken huge pay cuts to fill those slots – was always absurd.

Then Benmosche dropped one last bomb:

We're trying to find the villains [for the financial crisis]. There's got to be a villain somewhere. The problem is that there isn't a villain. There are villains. And they are everybody. They are the speculators in real estate. The people who flipped houses. People who lied and cheated [on mortgage applications]. Nobody did the income appraisals. … I include myself in there. I knew stuff was wrong.

Benmosche worked in high-level positions at both Credit Suisse and MetLife in the pre-crisis years, so one assumes he's talking about those jobs when he hints there was a time when he "knew stuff was wrong" with the mortgage bubble but apparently didn't say anything. So he kept his mouth shut and got rewarded for non-acting in the face of crisis with a job running AIG, where he sucked millions in comp from the taxpayer for years, which must have seemed only natural to him.

In tossing out this "everyone was a villain" line, the CEO, of course, only mentioned the small subset of ordinary people who were "villains" in those days, the low-level speculators who flipped houses and the homeowners who lied on their mortgage applications.

He conveniently left out the bigger institutional players who birthed this scheme, like the giant investment banks (including for instance Credit Suisse, where he worked) that not only knew that mass fraud was being committed at the mortgage application level but encouraged it, so that they could speed up the process of pooling and securitizing those mortgages and selling them off to unsuspecting third parties. Just to take the one example of his own former bank, investors in the mortgage securities sold by Credit Suisse incurred over $11 billion in losses, according to a complaint filed by New York AG Eric Schneiderman against the firm last year.

Banks knew, lenders knew, ratings agencies knew, and then of course firms like AIG knew that something was deeply wrong with the booming mortgage markets in the years leading up to 2008. The peculiar trade of AIGFP was the obviously crazy practice of selling hundreds of billions of uncollateralized insurance to the Goldmans and Deutsche Banks of the world, who in many cases were using these policies to bet against their own products. The 377-odd employees of that sub-unit of AIG took home over $3.5 billion in compensation for such socially-beneficial service in the seven years before it all went bust. If finance-sector pros in those years had reservations about where all that money came from, most, like Benmosche himself, kept them to themselves.

Stories like this "hangman nooses" thing give some insight into the oft-asked question of how the 2008 crisis could ever have happened, the answer being that the people who run our economy, like Benmosche, are basically idiots. They can read a spreadsheet and get through an investor conference call sounding like they know what they're talking about, but in real-world terms, your average pimp is usually an Einstein in comparison.

These people are so used to being told by interns and finance reporters and other ballwashers that they're geniuses that they pretty soon come to believe it, which is how concepts like "We'll never lose a dollar – it's all hedged" go unchallenged in rooms full of econ majors who've just bet the whole store on the mortgages of underemployed janitors and palm-readers. Somebody, please, tell these guys quick how smart they're not, or else we'll be in another crisis before we know it.

Posted with Blogsy
Posted by Conchscooter at 12:00 PM 2 comments: Links to this post

Winding The Year Down

The year ending is an arbitrary thing to a logical thinker like me. I gave up thinking much about New Year after the century changed in 1999 (I too think it changed in 2000/01 but let's leave that aside as a hopelessly minority position, okay?). So I spent much of my life wondering about the change of year, change of millennium thing. When I was a kid we were told this or that innovation would happen "by the turn of the century." The 1st of January 2000 came and went and all those jet propelled hover cars and commuting to the moon and all that never materialized. Besides, dates are totally arbitrary, a human invention for convenience based solely on...no one quite knows what. Jesus' Birthday? Historians have been pointing out the Messiah was probably born in 4 Before Christ (the common era we call it today, like it or not). And not likely in December. Jews are still waiting for their Messiah and they name dates after Japanese car companies (Nissan, anyone?). But New Year's Eve is a great way to make money so our bosses push it hard. 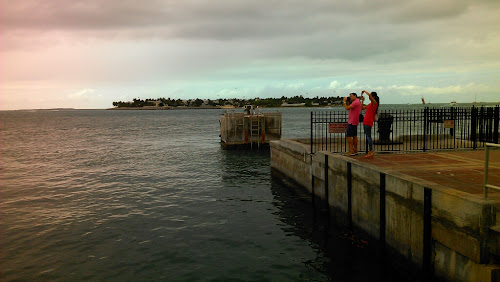 This week is a madhouse in Key West packed with people and all of them demanding a good time to see the new year in. Nothing stops or slows down for this holiday. We have a small town with three centers of celebration slated for midnight Tuesday, all based on New York's dropping of the ball. Key West drops a pirate wench, a conch shell and a transvestite - take your pick. My wife and I have an opportunity this year I attend as I am training on day shift so I will be done working by 6pm. On the other hand I can already see the effects of over crowding, bad driving habits and lost tourists, every intersection in Key West is an adventure in self preservation this week. Amalgamating it all into one giant drunken street party seems overwhelming. We may just stay home... 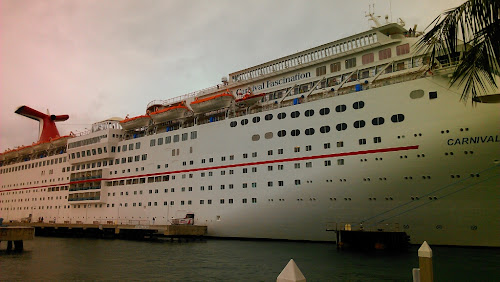 I'd like to attribute my lack of enthusiasm for the street party to superior anti consumerist political principles, or a smug refusal to agree to commonly accepted calendar dates, or perhaps even simple self preservation in a world gone drunk that night. I suspect we will not be seen cheering and drinking on Duval or at Schooner Wharf for one simple reason: sheer laziness. 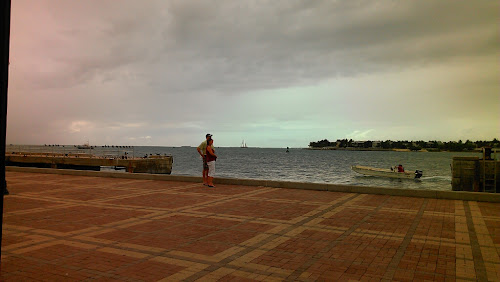 Posted with Blogsy
Posted by Conchscooter at 12:01 AM 3 comments: Links to this post