I have to admit I pretty much ignored the recent cold front that blew through town, the first and only real cold front this winter. Skies turned black with heavy, rain filled clouds, winds blew and temperatures dropped. It then rained, for the first time in months, and even after the rain finished and the north winds blew the skies tended to remain overcast. It even felt cold though night time temperatures never dropped below 55 degrees. the front was well announced in advance so I took the time to step outside The house with Cheyenne one evening and recorded the end of the longest warm winter stretch anyone can remember: 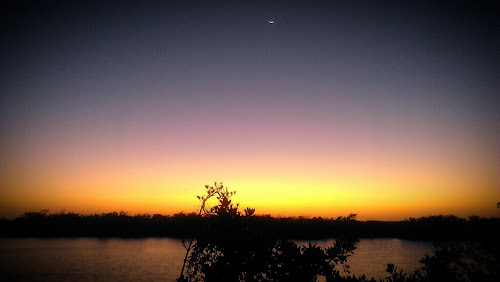 Sometimes the colors and bright light of winter just needs to be put on record. That's one way of not being complacent about living here. And fr s e people, Key West is Disney, a fairground attitude best exemplified by tourists stepping off sidewalks into the face of red lights. Then they look upset ad flash angry glances at te car that nearly ran them over. That the car was obeying the green light means nothing to peop,e who think this town is as artificial as Disney's Main Street...And some people like to attach stickers around town. These weird faces were popular for a while but perhaps their author has moved on to more receptive communities: 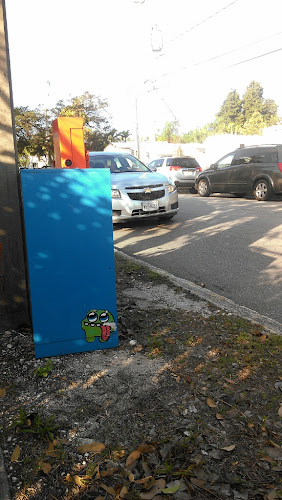 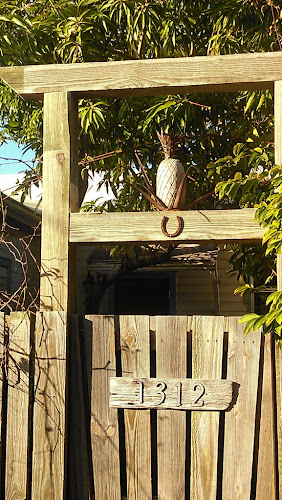 I took Cheyenne to dog beach and perhaps the end of Vernon Street just isn't her cup of tea of perhaps the presence of a boisterous young water dog put her off as she tends to prefer her own company, but in the event we spent a few minutes there and she wandered off much more interested in sniffing the sidewalk in front of Louie's Backyard restaurant next door. 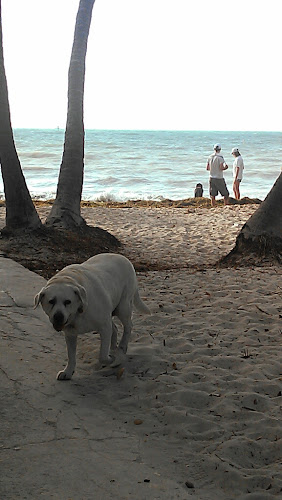 A sidewalk artist was busy. I'm not sure what the protocol is about photographing other people's paintings so I took a generic picture and left it at that: 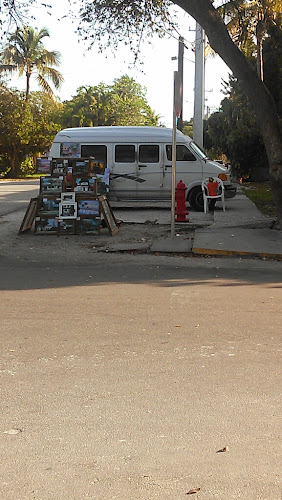 In my head I was comparing and contrasting the itinerants inter with the itinerant folks who hang out on Stock Island after a night sleeping at the Temporary Shelter: 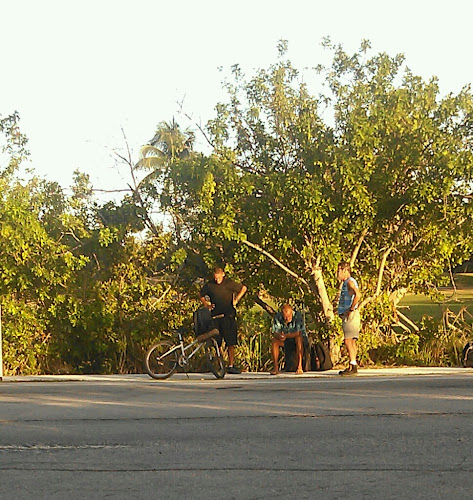 Small motorcycles are making a comeback in the US, they say, even outside Key West and certainly it seems there are more smaller machines available Han ever. I am not much of a fan of off-road machines as they have tires not designed for road use and their set heights usually leave me unale t reach the ground when astride the saddle. 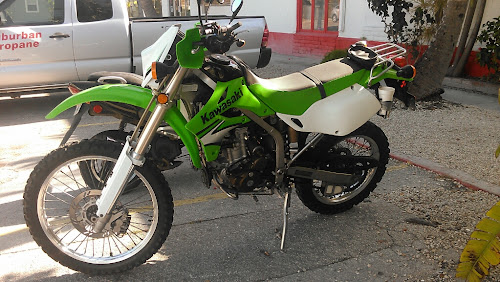 They make for excellent rides through city traffic, nimble and fast and in Key West, adapted to local usages by creating a useful place to keep a cup of con leché the universal Cuban coffee drink, good any time day or night. 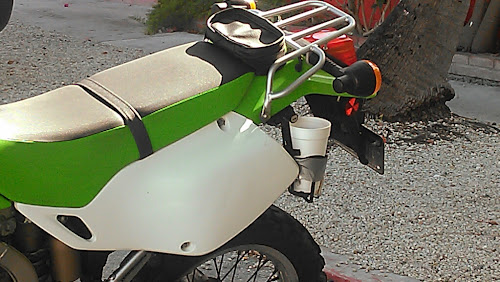 These are my idea of proper wild chickens for Key West, native birds, quiet and delicate and as dedicated to eating irritating insects as any loud messy rooster. 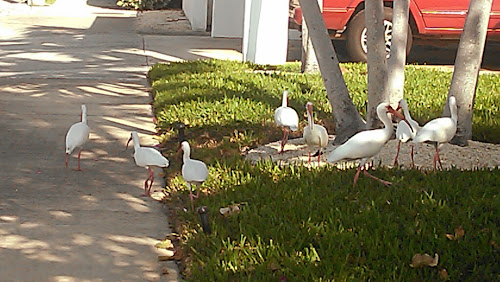 The cause of all the trouble, Cheynne stepping out and enjoying the cool weather: 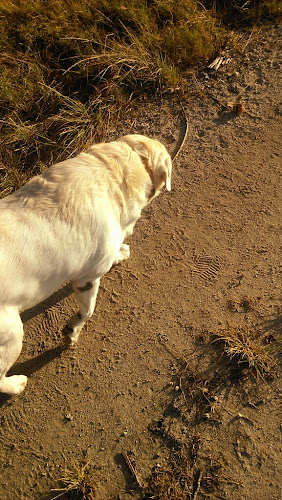 Though not all dogs feel the need to be terribly energetic: 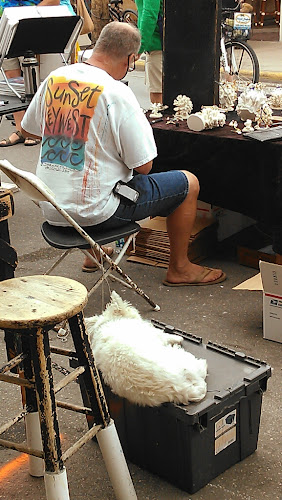 Happily the cold front is gone and daytime highs in the 80s are reasserting themselves while night time lows near 70 make for perfect sleeping weather. The way winter should be.

Every Monday morning I turn to the delightfully titled "Clusterfuck Nation" blog published by Jim Kunstler who lives in up state New York. He has a particularly jaundiced view of modern life which he feels sure is about to implode on the reefs of high energy costs and suburban sprawl, an architectural style which gives him heartburn. I read this week's Monday Morning Essay with a particular Key West perspective, noting the plans for a large strip mall to be built on Rockland Key, a plan whose size is in contention between the county and the developers, and whose occupants are yet to be decided, but whose construction seems to be guarenteed. It is a shopping plan that fits perfectly into Kunstler's nightmare scenario, subtracting from the stores in Key West and requiring driving from this city which is relatively well adapted to cycling and walking (and even modest moped riding!). 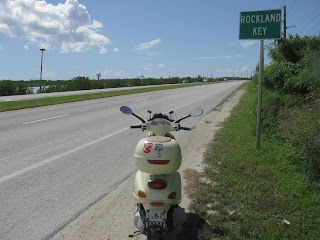 Back in the day when big box retail started to explode upon the American landscape like a raging economic scrofula, I attended many a town planning board meeting where the pro and con factions faced off over the permitting hurdle. The meetings were often raucous and wrathful and almost all the time the pro forces won -- for the excellent reason that they were funded and organized by the chain stores themselves (in an early demonstration of the new axioms that money-is-speech and corporations are people, too!).

The chain stores won not only because they flung money around -- sometimes directly into the wallets of public officials -- but because a sizeable chunk of every local population longed for the dazzling new mode of commerce. "We Want Bargain Shopping" was their rallying cry. The unintended consequence of their victories through the 1970s and beyond was the total destruction of local economic networks, that is, Main Streets and downtowns, in effect destroying many of their own livelihoods. Wasn't that a bargain, though?

Despite the obvious damage now visible in the entropic desolation of every American home town, WalMart managed to install itself in the pantheon of American Dream icons, along with apple pie, motherhood, and Coca Cola. In most of the country there is no other place to buy goods (and no other place to get a paycheck, scant and demeaning as it may be). America made itself hostage to bargain shopping and then committed suicide. Here we find another axiom of human affairs at work: people get what they deserve, not what they expect. Life is tragic.

The older generations responsible for all that may be done for, but the momentum has now turned in the opposite direction. Though the public hasn't groked it yet, WalMart and its kindred malignant organisms have entered their own yeast-overgrowth death spiral. In a now permanently contracting economy the big box model fails spectacularly. Every element of economic reality is now poised to squash them. Diesel fuel prices are heading well north of $4 again. If they push toward $5 this year you can say goodbye to the "warehouse on wheels" distribution method. (The truckers, who are mostly independent contractors, can say hello to the re-po men come to take possession of their mortgaged rigs.) Global currency wars (competitive devaluations) are about to destroy trade relationships. Say goodbye to the 12,000 mile supply chain from Guangzhou to Hackensack. Say goodbye to the growth financing model in which it becomes necessary to open dozens of new stores every year to keep the credit revolving.

Then there is the matter of the American customers themselves. The WalMart shoppers are exactly the demographic that is getting squashed in the contraction of this phony-baloney corporate buccaneer parasite revolving credit crony capital economy. Unlike the Federal Reserve, WalMart shoppers can't print their own money, and they can't bundle their MasterCard and Visa debts into CDOs to be fobbed off on Scandinavian pension funds for quick profits. They have only one real choice: buy less stuff, especially the stuff of leisure, comfort, and convenience.

The potential for all sorts of economic hardship is obvious in this burgeoning dynamic. But the coming implosion of big box retail implies tremendous opportunities for young people to make a livelihood in the imperative rebuilding of local economies. At this stage it is probably discouraging for them, because all their life programming has conditioned them to be hostages of giant corporations and so to feel helpless. In a town like the old factory village I live in (population 2500) few of the few remaining young adults might venture to open a retail operation in one of the dozen-odd vacant storefronts on Main Street. The presence of K-Mart, Tractor Supply, and Radio Shack a quarter mile west in the strip mall would seem to mock their dim inklings that something is in the wind. But K-Mart will close over 200 boxes this year, and Radio Shack is committed to shutter around 500 stores. They could be gone in this town well before Santa Claus starts checking his lists. If they go down, opportunities will blossom. There will be no new chain store brands to replace the dying ones. That phase of our history is over.

What we're on the brink of is scale implosion. Everything gigantic in American life is about to get smaller or die. Everything that we do to support economic activities at gigantic scale is going to hamper our journey into the new reality. The campaign to sustain the unsustainable, which is the official policy of US leadership, will only produce deeper whirls of entropy. I hope young people recognize this and can marshal their enthusiasm to get to work. It's already happening in the local farming scene; now it needs to happen in a commercial economy that will support local agriculture.

The additional tragedy of the big box saga is that it scuttled social roles and social relations in every American community. On top of the insult of destroying the geographic places we call home, the chain stores also destroyed people's place in the order of daily life, including the duties, responsibilities, obligations, and ceremonies that prompt citizens to care for each other. We can get that all back, but it won't be a bargain.