There's a fine line between stubbornness and determination, and I dare say the line falls somewhere between success and failure. It's too early to say for sure but it seems possible, nay likely that Robert's inveterate tinkering may have finally struck gold in the search for outboard reliability. We pondered the problem of sudden and complete refusal to run. Robert was convinced it was a fuel problem. I wondered if a carburettor gloat was sticking. I have a grasp of theoretical mechanics but the practical aspect of digging into delicate machinery fills me with trepidation. 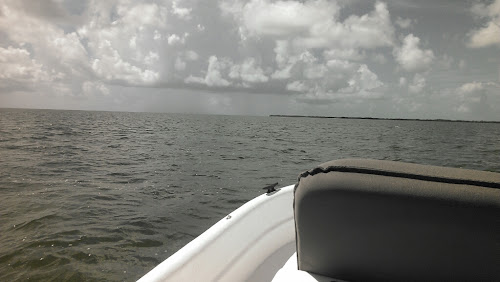 Not so Robert who found a carburettor float filled with fuel, where it was supposed to be filled with air. Thus after a while the float would lose buoyancy and shut down the flow of fuel. Eureka! You can see the dark part of the u-shaped float which was filled with gasoline and should have been light gray and filled with air. 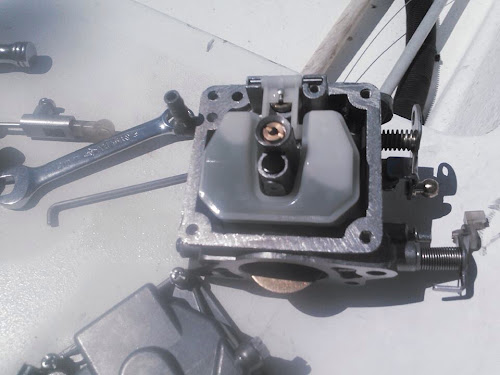 The discovery and replacement of the defective float required a test drive which would involve putting oneself into the tender arms of providence and faith that fatal defect had in fact been found and remedied. Off I went, across Cudjoe Bay and up the channel between the mangroves at the southern end of a Sugarloaf Key. I had Tow Boat US's phone number in my cellphone. Just in case, you understand. 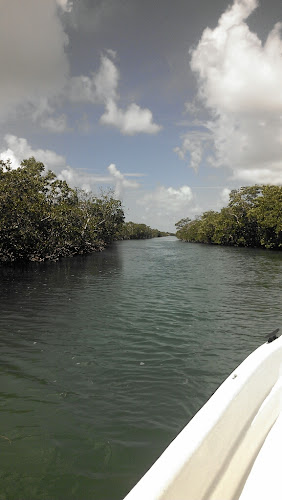 Ten minutes after leaving my canal I was deep in the greenery of the main channel, wide and deep, and easy to plane through if you have a mind to. I was into puttering, it was such a lovely day. 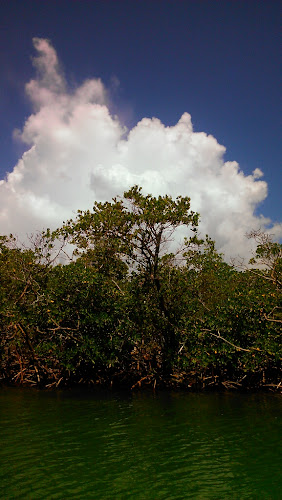 Idle speed is a little low on the Yamaha so I had to pay attention to maneuvering close to the bushes but it was running fine, planing across open water at 24 miles an hour (20 knots) according to my brilliant phone GPS app. 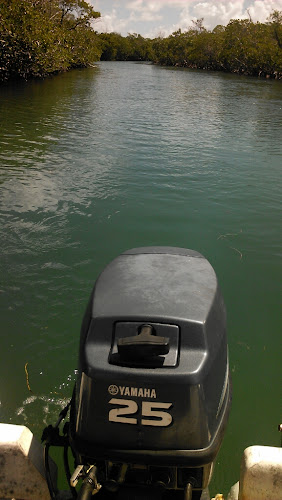 Just before the old State Road 939 bridge remnants I turned south off the main channel and took off down what the charts call Tarpon Channel. The opening was side and deep so even though the tide was running strong and fast we powered through the gap quite easily. 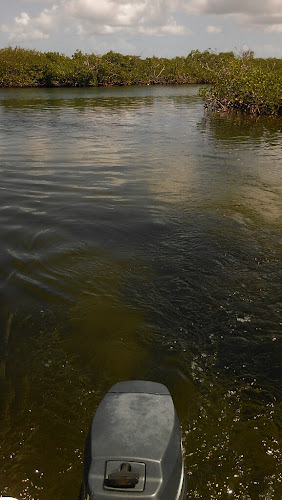 There is plenty of room for a 14 foot skiff, and the constant tidal action scours the bottom, so the channel is deep, looking straight down at the sand and weed bottom it looked about six feet most of the time. Deep enough to drown me in any event. 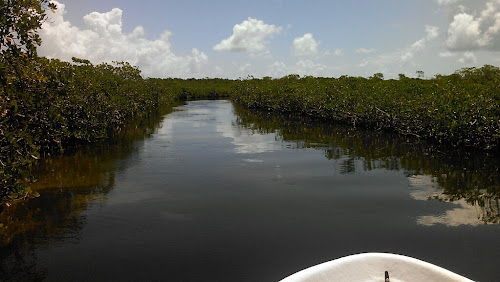 It is a desolate stretch of water winding back and forth like a tormented snake out of sight of anything but green leaves and blue sky. 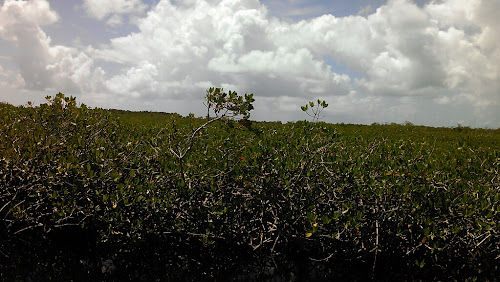 It is in these peculiar tropical environs that one thinks of movies that play on the strangeness of such surroundings. Katherine Hepburn and Humphrey Bogart messing about in the jungles of East Africa comes to mind. They shot The African Queen in Africa for the most part, even though the boat itself is restored and offers yours in Key Largo these days. And it's time I paid it a visit. 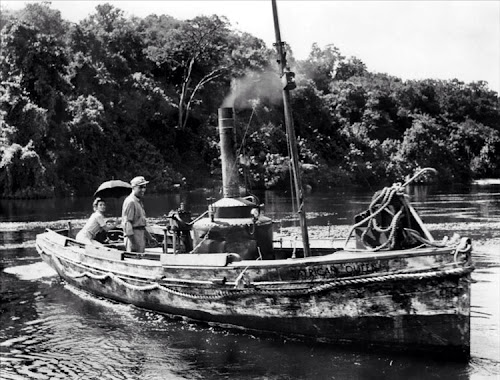 They could have filmed it here! 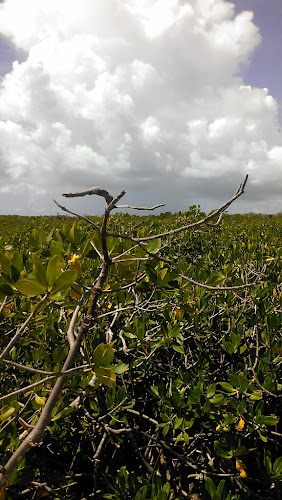 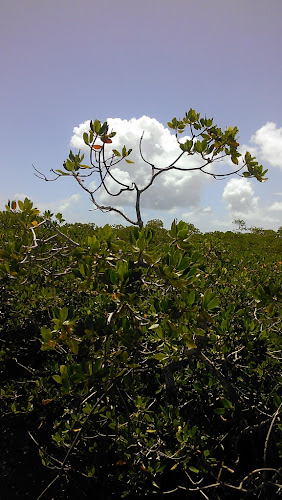 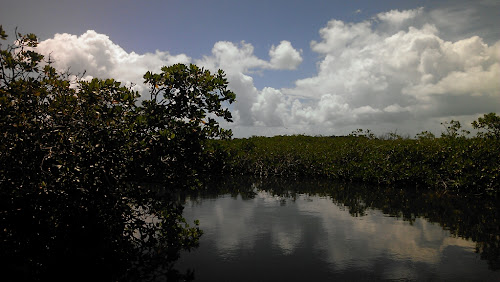 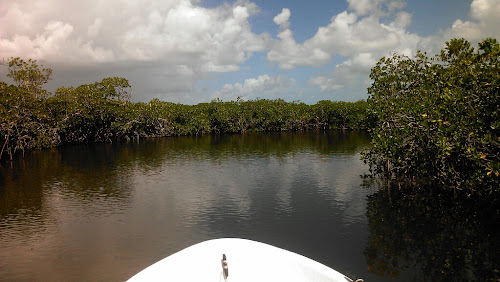 Red mangroves grow out of salt water directly filtering the salt out into their leaves. But it's no place for humans or dogs to take a walk. 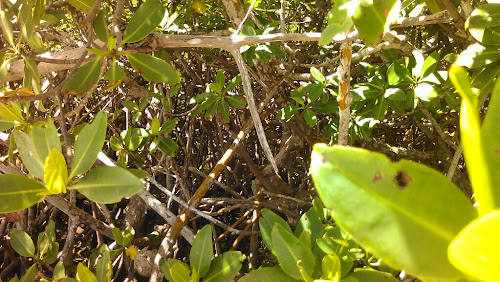 Some of the mangroves grow taller, looking from a distance like hillocks but it is an illusion as underneath it's all just salt water. The apparent end of the channel was also an illusion as a sharp ninety degree turn opened up as I got closer. 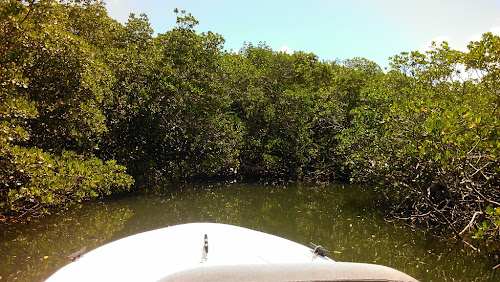 Tarpon Creek is all oxbows and the channel winds back and forth requiring sharp turns and patience. This is actually a ninety degree angle rendered thus by the camera:

Getting closer of open water dead clumps of seagrass start to appear everywhere, as annoying here as on open water. Except here I didn't get my prop clogged by the stuff which was nice. 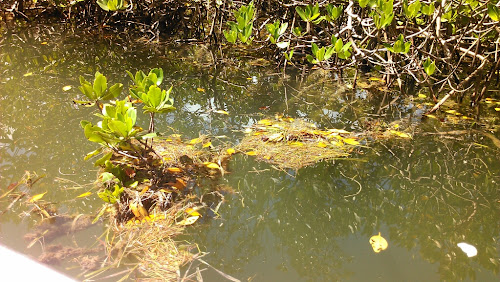 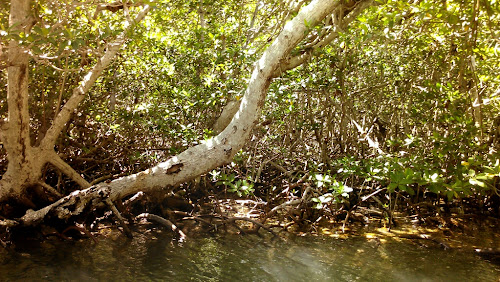 This small side channel could be explored in a kayak: 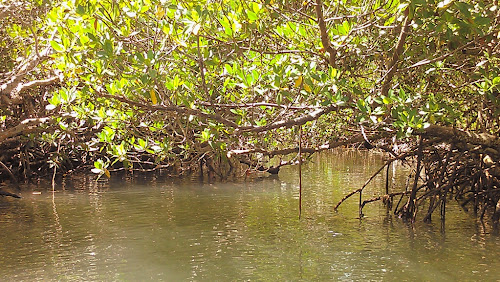 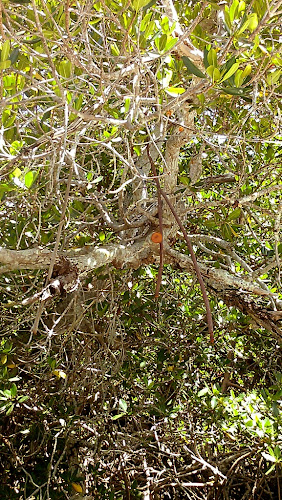 I did not see much wildlife, a flash of white over the trees and the bird was gone. For the rest of the trip, nothing. To see wildlife you generally have to linger...next time I'd bring shade and more time to lounge around in a comfortable beach chair to see who or what might happen by. 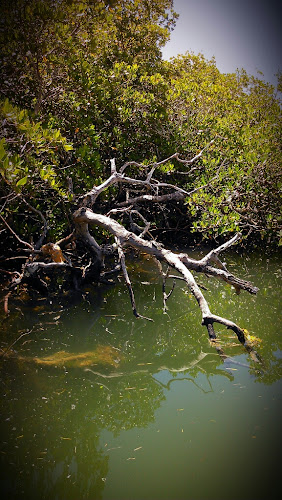 As it was the test ride was over so when we came out into open water... 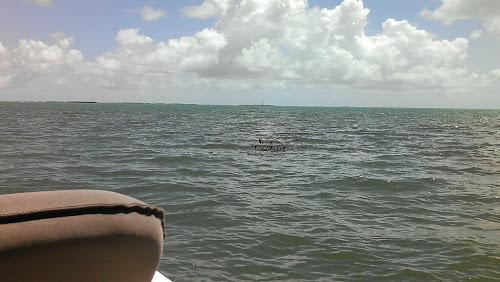 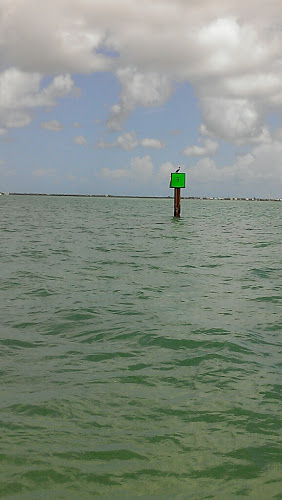 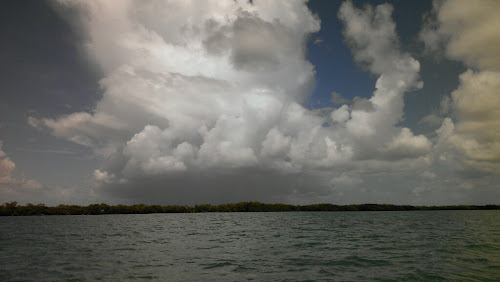 So far so good, no imminent engine failure.

The news item below comes from the Caribbean nation of Trinidad and Tobago, a country noted for oil exploration, carnival celebrations and lively newspapers, in the British tradition. The news from this newspaper is surprising and shocking. Not that I go in for palmistry but he was a fixture on Duval Street and now he's dead. As much as it's a cliche, you really don't know when your time is up, so act accordingly.

Jerrybandhan, a resident of Key West Florida, was shot in a bedroom of his son's home at Cooper Street, where he was vacationing.

Family members said they heard a single shot at around 9.30p.m. and found Jerrybandhan dead. It is suspected that the killer hid in an overgrown lot across the road from family house.

Jerrybandhan, 74, lived at Key West, Florida, and was a respected and much sought after palmist.

The Police Service issued a statement today, making no reference to the murder, but reported responding to a shooting, and finding a loaded gun and marijuana at a nearby pan yard.

The Police Service stated: Around 11:30 pm on Monday 8th September 2014, a party of police officers attached to the Southern Division under the supervision of Constable Richardson was on mobile patrol when they received information relative to a report of shooting at Cooper Street, San Fernando. The officers immediately responded and upon reaching in the vicinity of Pleasantville Avenue, Pleasantville they became suspicious of an opened pan yard gate. The officers made checks in the area and carried out a search on the premises. Subsequently the officers found one black plastic bag containing one Revolver with six rounds of ammunition and a plastic bucket containing a black bag with several packets of Marijuana weighing 3.76kg with an estimated street value of $56,400.00 dollars. Enquires are continuing.
Posted by Conchscooter at 12:00 AM No comments: