Frank Deford (December 16, 1938 – May 28, 2017) died in Key West Sunday. He was 78 so one shouldn't be surprised I suppose though his death is another marker on my journey toward old age. Manuel Noriega also died this week, another public figure who loomed large in my 30s when the brief war was fought to unseat him in Panama, yet unknown to the young people I work with. Unlike Noriega I enjoyed Deford's Wednesday commentaries on Morning Edition even though sports as a rule leave me cold. He was much amused by the loyal following he had among people like me who actually don't like sports. He told me so in 2008 when I went to hear him speak and I was armed with the best digital camera I could find at the time. Not great pictures but here they are from that long ago speech: 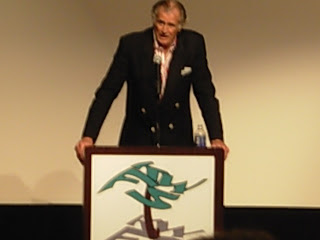 Frank Deford has been broadcasting sports commentaries on Wednesday mornings on NPR's Morning Edition since 1980 and I've been listening to him since 1982. Apparently he winters in Key West frequently and this week he gave a talk at the Tropic Cinema as part of the Friends of the Library winter speakers series. 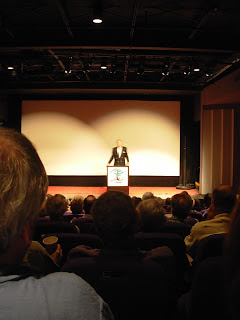 When my wife and I lived in Santa Cruz, California we expected our friends would be NPR listeners, which letters in the Reaganite 1980's were often taken to mean Nicaragua Public Radio. Public funding has shrunk since then, and corporate sponsorship has kept a more middle-of-the-road NPR flourishing, which has in turn rendered it less appealing to a listener like me who wants NPR to be a different voice in a media broadcasting world of blandness and sameness and ownership by the powerful. Oh well!
Frank Deford has kept on saying his sporting piece each week, ignored by long time Key West inmates who, over the decades had no idea who Deford or NPR were, as there was no non commercial radio in Key West. Only recently has WLRN in Miami arrived in Key West at 100.5 FM with all NPR news by day and jazz by night and reggae in the early morning. At my house 25 miles out of Key West I listen at 91.5 FM, Marathon is also 91.5 and Long Key is at 92.1 all part of a long string of translators down the islands. 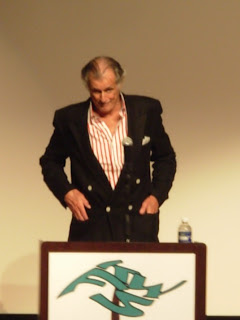 I used to work at an NPR affiliate and I submitted a number of reports to the network during the 1980's and once the thrill of hearing my name go national wore off I was left feeling bored by the formula, by the editing, by the sense that what was of value was only understood by the newsroom in Washington, not where I lived in Fruitcake, California. I stopped trying to please my masters in the network and retreated to making a nuisance of myself in local news and then, tired of the trivialization of news, I quit what my buddy, NPR newscaster Frank Stasio used to call "show biz." I am a happier man for it. Frank Deford has been heard on NPR every week since 1980 and he's still going strong. He has the longevity that confers greatness. As Woody Allen says 80 percent of success is showing up. 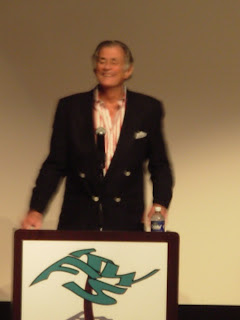 Deford's talk was centered around his new sports novel called "The Entitled," exploring the role and meaning of the "sports superstar" in our world. Jay Alcazar is a young Cuban-American baseball player overseen by a tired second rate player called Howie who now manages the Chicago White Sox. The book apparently opens with a possible date rape by Alcazar, possibly witnessed by Howie and the plot thickens from there, which was as much as Deford told us, in between reading excerpts from the book. He did say much of the action takes place in Cuba a country he has visited twice and is apparently where his plot ends up.
Deford also narrated some much appreciated Key West related anecdotes concerning the man after whom Boog Powell sports field is named. This it turned out was man renowned for playing baseball well while he was in Baltimore, a place where he endeared himself to the locals by drinking beer on his porch where he strolled home after a major league game. Somewhat at odds with the modern image of the baseball player as an inviolable demi-god. Deford also told of a day when sports players and writers were invited to the Clinton White House for a reception. Deford told his wife he was sure Clinton would recognize him, as the President was a sports fan and Deford had just written a glowing piece about an Arkansas player. As luck would have it the president remained blank when the Marine Officer announced Mr and Mrs Frank Deford, much to his chagrin, but he added with a twinkle, Mrs Clinton interrupted his introduction to gush how his voice woke her every Wednesday morning. "So how are you voting?" asked a voice in the bowels of the Tropic auditorium. "Oh," said Deford, "I always vote for my listeners," to howls of laughter. "But," he allowed,"the other guy is okay too." 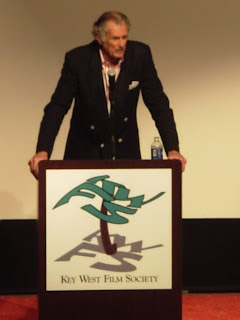 Deford had some comments about free agency and how football television royalties are evenly split between teams, stuff I could barely grasp. He allowed as the Paris Open in June was among his favorite events, but he doesn't like soccer except the World Cup when seen live in a European city. he answered my question about NPR with his famous line that his most devoted fans aren't into sports at all, which brought another round of applause from the packed theater. he made a point about baseball that struck home with me. He said baseball is a great sport because unlike all other games baseball allows time for reflection, for commentary, for discussion between pitches. And I have surprised my wife a few times by seeking out the night time AM frequencies on a car trip to listen to some distant baseball game as I drive. 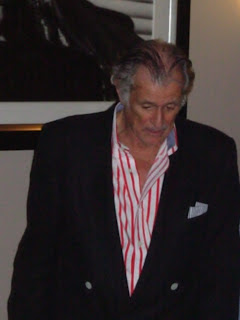 In closing Deford suggested sports are important to use because they bind the country together in a way that other activities fail signally to do, he also said to loud laughter that sports allow men to argue which is important for them to do. And he made another of those interesting points that keep me listening to him on Wednesday mornings; he said sports unlike any other art form are thje place where the popular and the quality are allowed to rise to the top. He compared good teams to great movies, so rarely recognized at say, the Oscars, or where the best music isn't necessarily heard on radio playlists. In sports he said you have an art form where the best is always the most popular. Deford is a sports commentator alone in a crowded profession. How many writers do you hear use the term sui generis when speaking of a player? Deford is sui generis 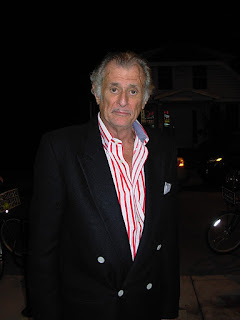 He was of course mobbed by the old biddy snowbirds on his way out but he kindly stopped for my flash and I caught his bemusement at his popularity in this little resort town. Key West I think cherishes its brushes with interesting people because, for such a distant little town it gets the attention of people worth listening to, but they don't stay so you have to catch them while you can. And we do.

He retired from NPR a month prior to his death. Part  of his last commentary:
“I have survived so long because I’ve been blessed with talented and gracious colleagues, and with a top brass who let me choose my topics every week and then allowed me to express opinions that were not always popular,” he said. “Well, someone had to stand up to the yackety-yak soccer cult. And perhaps just as important, I’ve been blessed with you, with a broad and intelligent audience — even if large portions thereof haven’t necessarily given a hoot about sports. Nothing has pleased me so much as when someone — usually a woman — writes me or tells me that she’s appreciated sports more because NPR allowed me to treat sports seriously, as another branch on the tree of culture.”