Key West In The Time Of Plague

I saw a post on Instagram posted by a local on a bicycle showing various spots around town and mentioning how hard it is to get away from clumps of tourists in a time supposedly devoted to social distancing. I asked myself why would you take a bike and a camera and deliberately seek out crowds? How does that make you smarter than the people you complain of? 24 hours later I was trapped in the bean aisle at Publix wondering how in the name of all hell had this happened to me..?  We are all fools and knaves in the time of cholera. 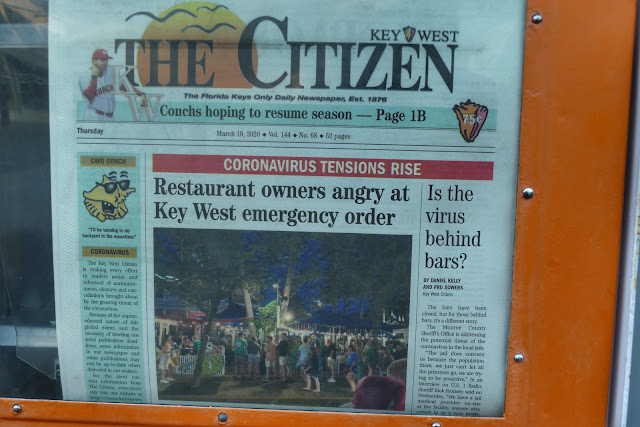 The city decided to go one step further than the Governor requested, so while Monroe County eateries are observing limited broadly spaced seating the city just said no more sit down restaurants, delivery and take out only, and no more bars and nightclubs.  All of which as you can see above, went over like a lead balloon. However all government meetings are now canceled which they had to do to avoid organizing a large crowd in violation of their own edicts. But food deliveries continued on Duval and side streets yesterday. 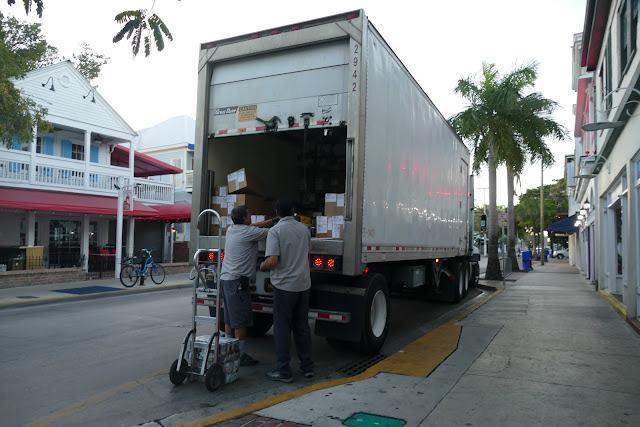 I sent that picture to my sister in Scotland and she texted me back horrified they were standing so close together. In an effort to support our favorite pizza place we ordered in last night and when the box arrived I transferred the pie to a dish and my wife, the one with the compromised immune system went nowhere near. Is it enough? Don't know...but it is a minor event that summarizes the dilemma. Help our neighbors by sending money and thus creating a pathway for the virus. It's enough to give you a headache, and as alarmist as I am, a headache becomes the first symptom... 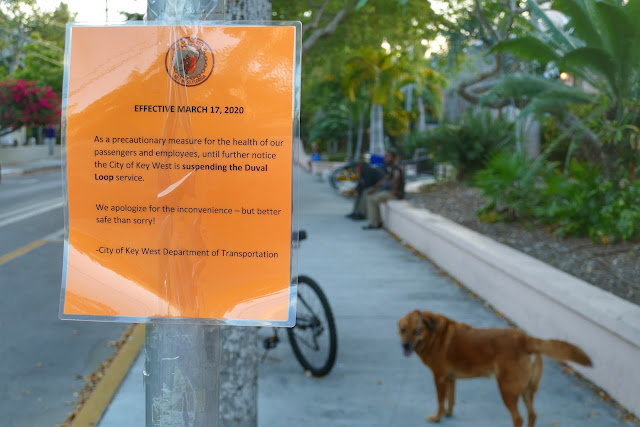 I started seeing people popping out on Duval, Street around eight o'clock so Rusty and I headed out on Fleming Street back towards the car. But even when we arrived on Caroline Street at 6:30 in the morning, well before sunrise people were out. 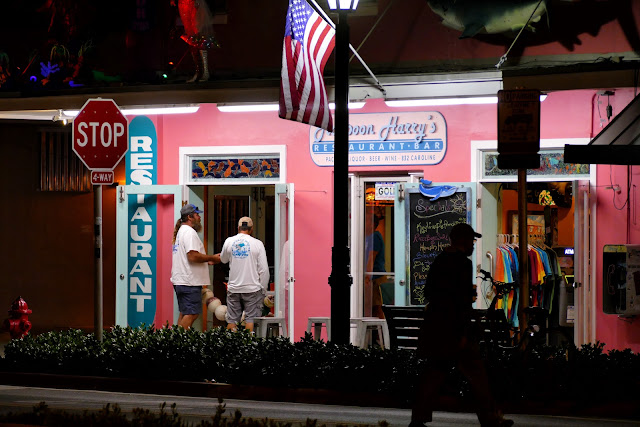 What do you do in a tourist town without tourists?  How do we sustain a local economy without Europeans, with no more Spring Breakers, with families staying home this summer? How long will two grand last a family without work? Actually it blew my mind to see politicians who derided President Obama's auto bail out offering cash money to anyone in reach. Thats the measure of how seriously the economy everywhere is suffering. 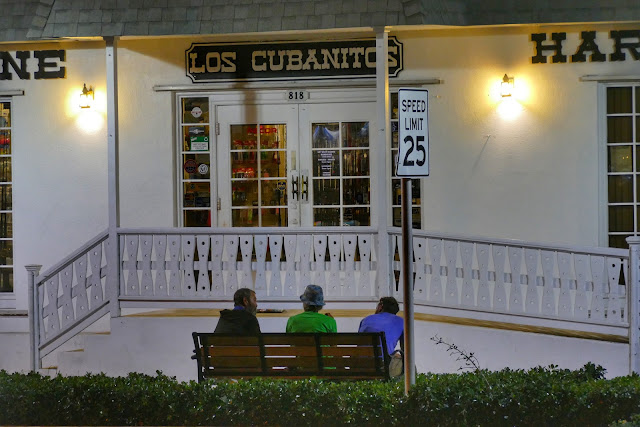 But all suffering is local and around here we see people who struggle to wait out a low season which lasts less than three months around here. Once upon a time the hospitality trade was a lean place to work from May to November, hence the need for Fantasy Fest to keep people going. 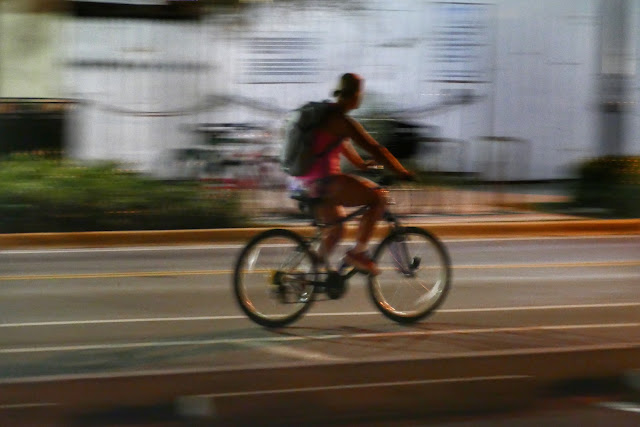 Nowadays the only low season around here starts in September after school starts and ends with the first snows Up North which push the snowbirds back south. The lean season this year may not let up before Fantasy Fest. I try to imagine that and I just can't. 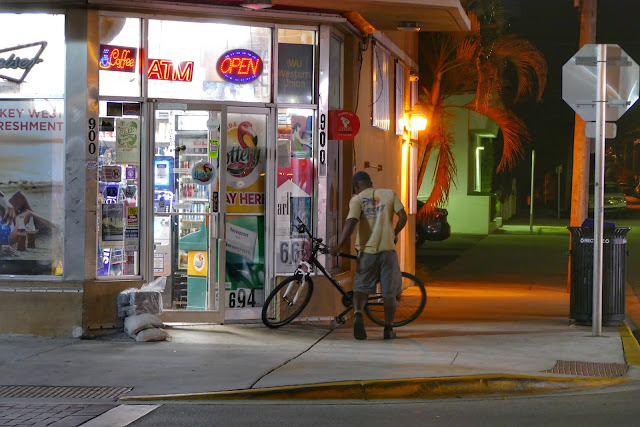 It is a very sobering thought to realize what it means to be connected so viscerally and directly with Wuhan in China. I was reading a few weeks about small businesses at the epicenter of the outbreak and how economic activity had ground to a halt and bankruptcy was in the future of everyone. I started reading the story with no great empathy figuring they were the cause of their own problems. It soon became apparent that was not the case. 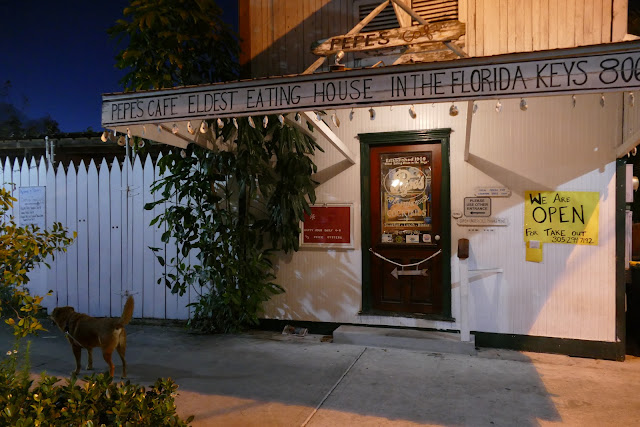 Now that I see the effects of this mess here at home the words of the restaurant owner in Wuhan laying off  cooks and servers are coming home to roost in Key West. For now some business owners are going to try to keep people hired by offering food to go, using waitstaff to deliver and bus staff to do maintenance or some such. How long this can last who knows? 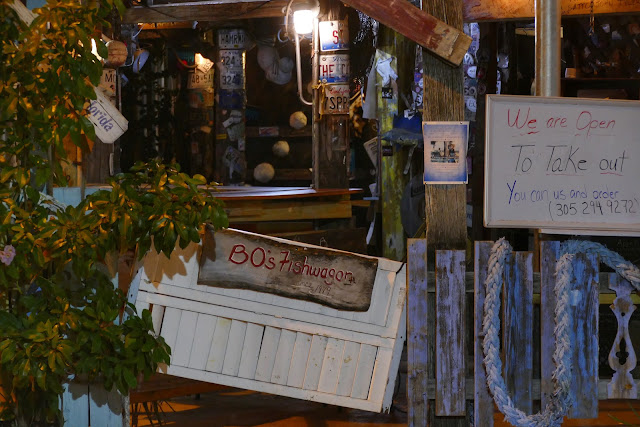 Meanwhile the weather is amazing, sunny and warm, cool and breezy at night, just perfect. I've started swimming in the canal behind my house and the sea water is just about warm enough. So you lay in the water lofting on your back staring u at the usual pale blue sky, big puffy clouds, and the sun glittering on the water. It's astounding when you remember the air is filled with fat coated viruses that give humans some of the worst breathing problems they can have. 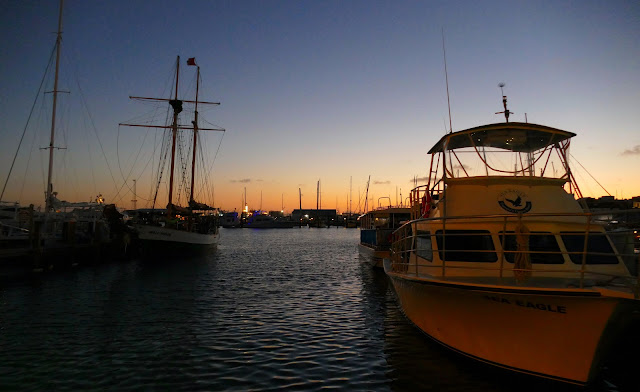 So my answer is to get up early, load Rusty in the car and take a city walk with my camera as usual, with no one around, no sitting on benches, no holding hand rails no touching anything. Sounds crazy right? It's how I do it with a hasty departure when people start appearing on the sidewalks. Yesterday I got a shopping list. Layne wanted to make beef stroganoff for dinner, a childhood comfort food that came to her mind in the midst of the plague. Egg noodles were included on the list. Brown rice, chicken parts, fruits and vegetables and the usual stuff. Toilet paper as a joke. Might as well not have bothered. Milk: 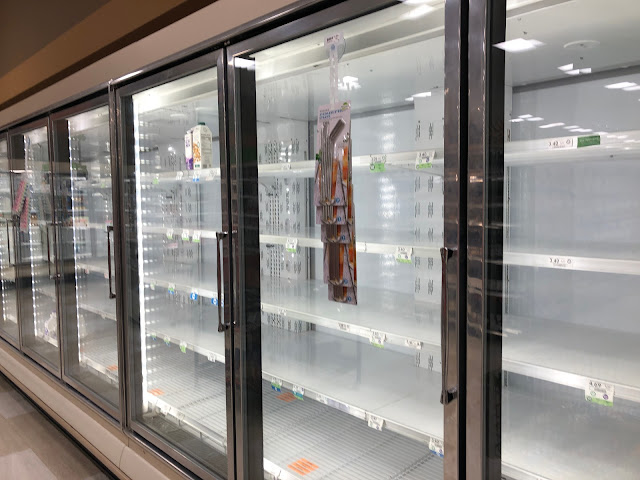 I was texting my sister in Scotland again and she was shocked I could find anything. Her stores in the far north of the country have been picked clean by people driving up, roaming all over the country shopping and filling there cars where they find supplies. Beans: 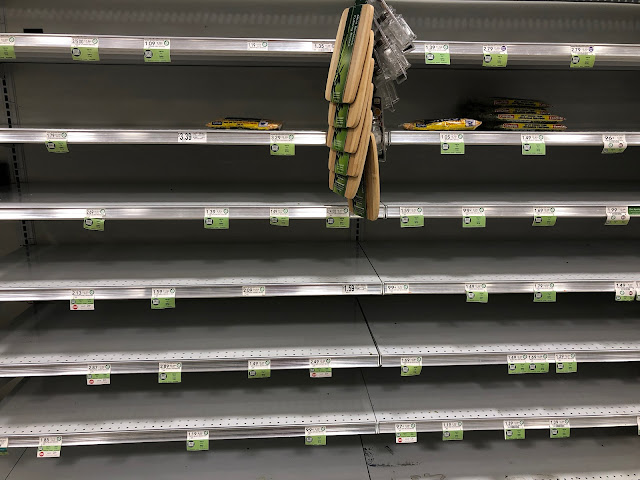 I skipped steadily between aisles picking up perishables and laughing periodically as my wife made impossible requests through the electric telephone. Meat: 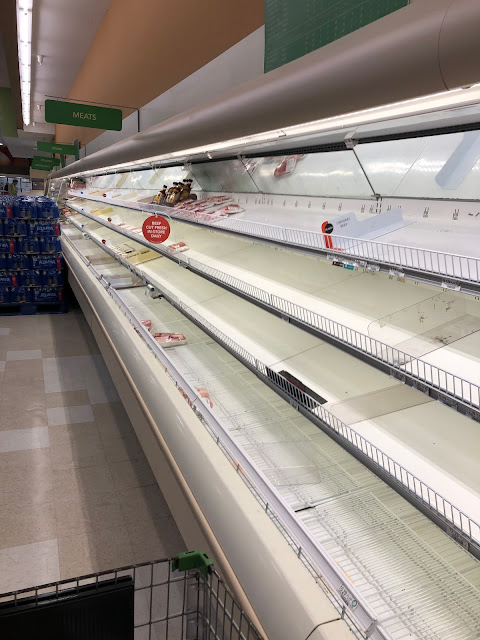 Toilet paper was of course hopeless but we knew that didn't we?  Luckily we don't need any but buying some has become a running joke in our home. Packaged cheese: 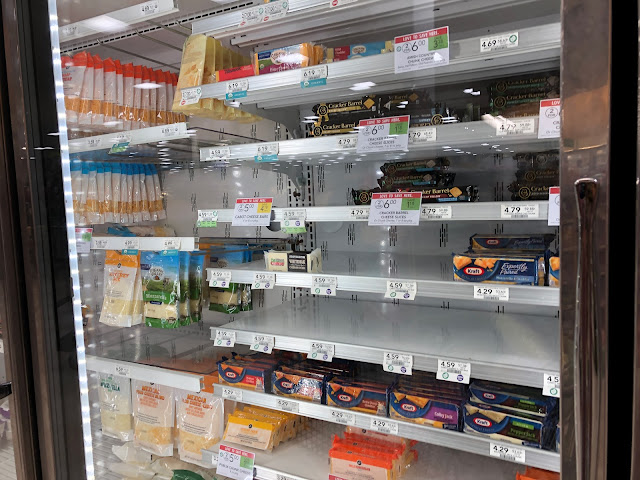 When I strolled into the New Publix, the one near Kmart not the one near Sears the crowds were manageable. I stopped, stood aside avoided getting within feet of anyone. Easy peasy. 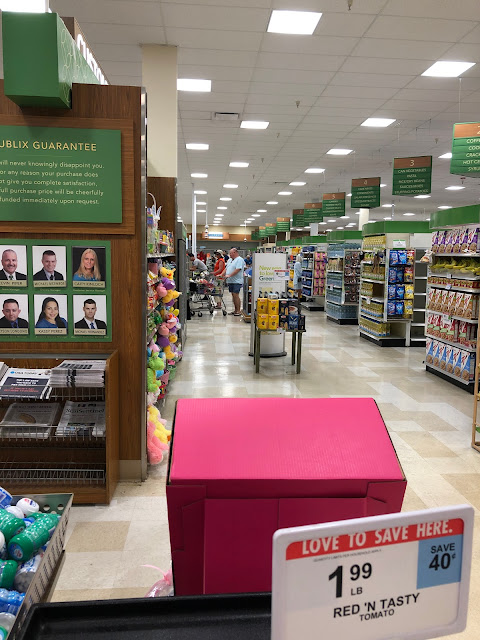 That didn't last. It got so bad I was ready to abandon my shopping cart. I had lettuce, fruit, English chocolate cookies and I couldn't abandon my Hobnobs obviously. So like a coronavirus tool I stuck it out. 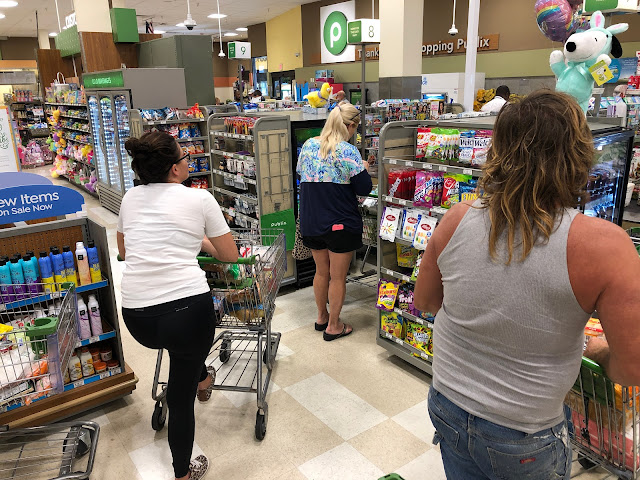 A woman touched my shoulder as she limped by looking the picture of elderly health, limping, breathing heavily like the best target for Covid-19, and she touched me. How she plans to manage her social distance I don't know. The group of young Spring Breakers blocking the exit were easier to understand, obliviousness is a trade mark of youth especially when they've been told they won't get sick and only the old people they touch will get ill.  That would have been me had I stayed in the way. 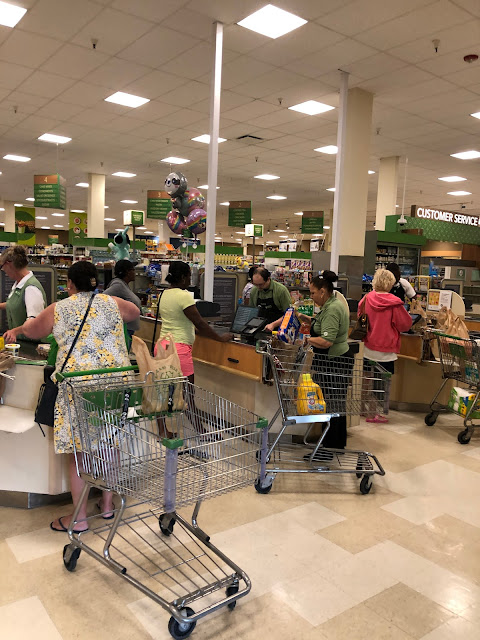 Back to the car, my hopes my sanitizer my bleach spray, my... 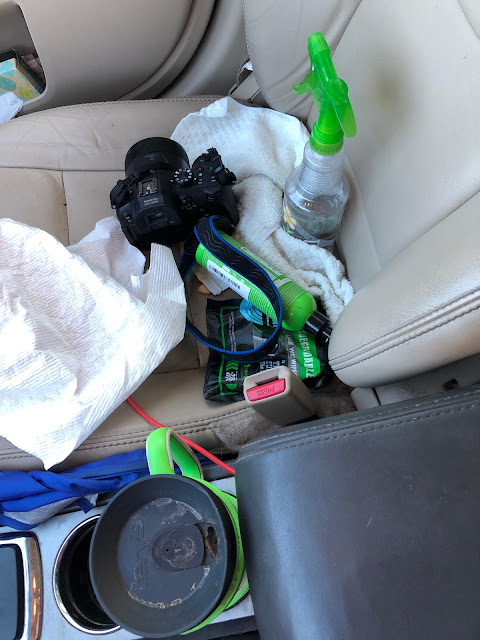 ...dog watching the world go by as only a creature with no exposure could do. 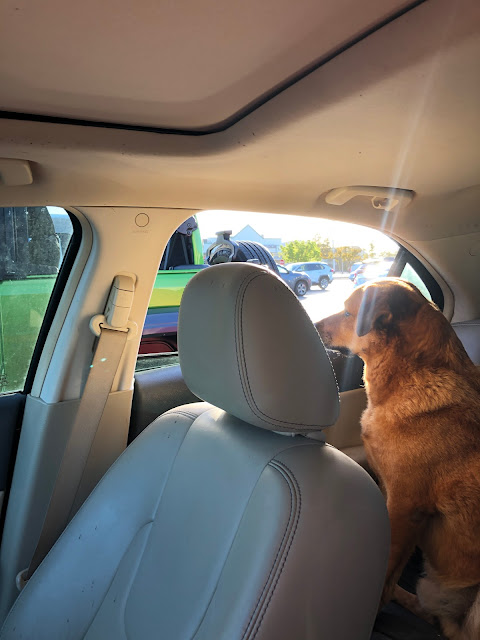 So ended my last shopping expedition. We have a small store near home where hopefully we can pick up odds and ends as time goes by and until then its another week at home on vacation before we each return to our respective jobs. And how lucky are we to have jobs?  Once again I feel so lucky to work for the police department. 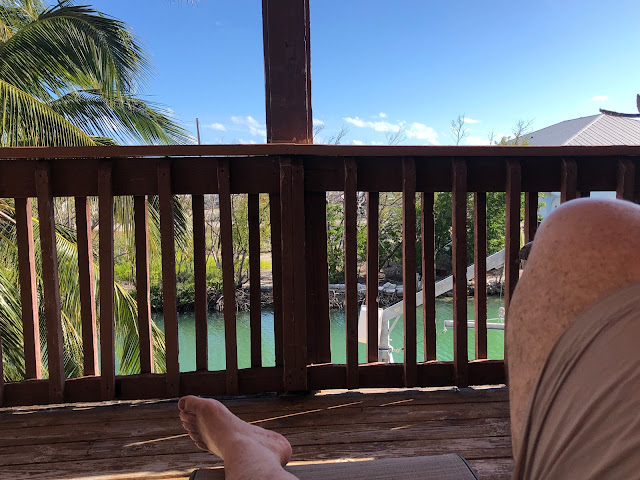 I have always loved my isolated walks in the back country, the perfect antidote to the usual stresses. Nowadays more than ever. The orders came fast and furious, courts closed gatherings limited to ten people, customer service at the utility company ended, our main Key West gym closed (we had already stopped going). Of course one takes it personally, but its all over the country. We have no testing, no way to know if we are infected, no idea who to put in quarantine so in the end, in the American Way, we make our own choices and for myself that works just fine. 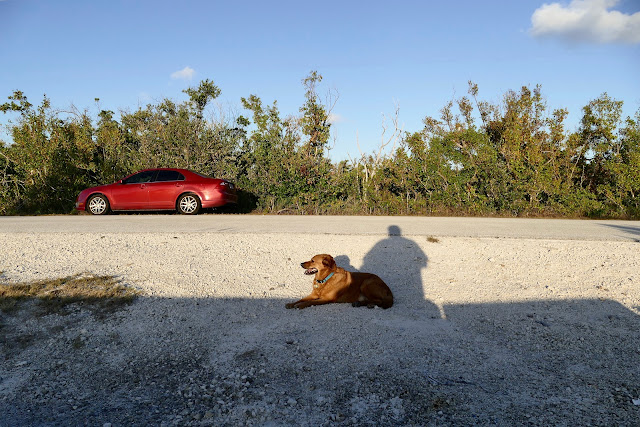 When I was a youngster in Italy I used to travel a fair bit by train, and even Michael the Oblivious noticed no one else on the entire train was reading a book. People gathered in compartments filled with strangers and chatted, endlessly and pointlessly about nothing at all. Oh it sounds exotic if you don't speak the language but for me the worlds I found between the pages were worth being the object of ridicule, being called a book worm with derision. I hunkered in my seat in the corner and dived into my stack of books. Nowadays I watch the videos of Italians locked at home going slowly mad. They don't do social isolation so well though they are putting a good face on it and learning once again the words of the National Anthem which has got a new public life in this period of plague. "We  are ready to close ranks and die for Italy. Yes!" The words of Mameli's Hymn are getting a bit close for comfort.
I've learned how to do get pretty good at isolation and keeping myself amused. I know you face the same issues where you live and I hope you are ready to practice Netflix and chill for as long as it takes. May it not take too long at all.
Italy In Quarantine