My wife looked at me with a shopper's gleam in her eye and pointed out there are free trees to be had tomorrow morning in Key West. Keys Energy has received a shipment of plants from Florida Native Plant nursery and is handing them out on James Street and Cudjoe Key tomorrow morning. One small step in the fight against climate change. 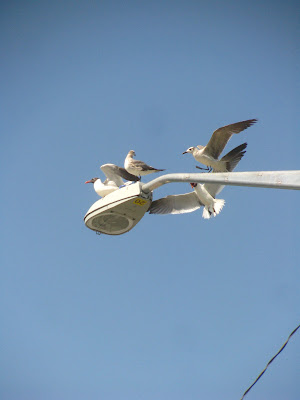 "No," I said firmly to my wife. She looked pained questioning my manly forthrightness. "No" I insisted."Where would we put it?" Already our little plot of land on Ramrod Key has shade trees all round our little house. My wife, crestfallen was forced to acknowledge my good sense. In all things we eschew stuff for stuff's sake. You have to if you choose to live in a tiny space. 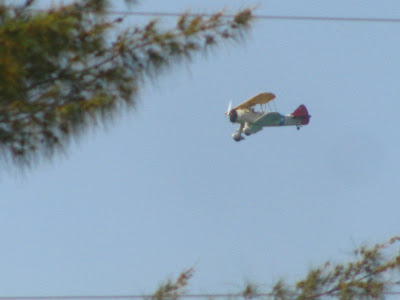 Also in the paper we see one more public official possibly getting jail time. A former executive of the Mosquito Control Board is giving up his right to a jury trial for theft charges. He allegedly used utility cell phone accounts for his family members for several years and may get a year in state prison. I am astonished how tenacious the District Attorney's Office has been in chasing down these cases. Three cheers. 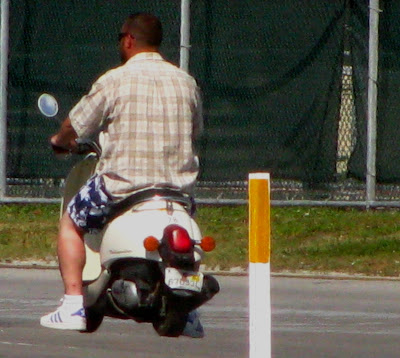 I think people who ride scooters dragging their feet should be prosecuted but that is most likely outside the purview of the law. 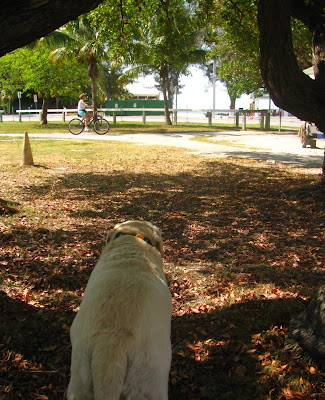 Gratuitous dog picture to remind us who loves us.
Posted by Conchscooter at 9:01 PM No comments: Links to this post

If anyone in class doesn't know what Jack riepe http://jackriepe.blogspot.com/ looks for at a beach, raise your hand now. Yes, that's right; nubile young women. And class, what does Conchscooter look for? yes that's right too, irony understated unintentional humor and grotesque contradictions. Today Jack riepe rockets to the head of the class with this study of a young woman on a bicycle. 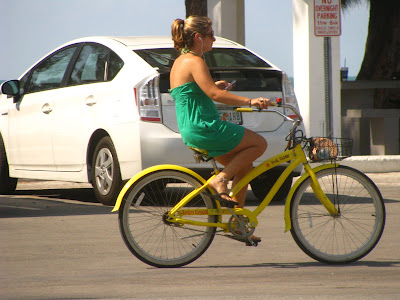 Looking closer to the water we see this happy woman striding up the strand after an enjoyable swim. Very riepe. 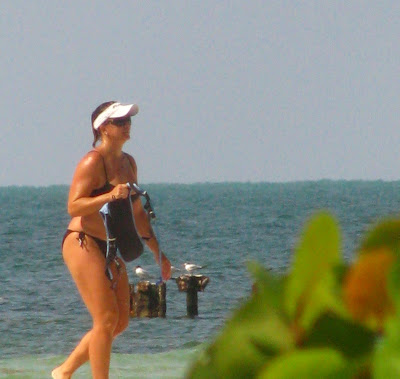 And here we have an animated conversation on the short pier at the west end of the beach. Seen through the coconut fronds the picture has an air mystery and a Peeping Tom quality completely alien to the brash Jack riepe's approach to the subject matter. I'd like to think of it more as a secret agent on the trial of something big. 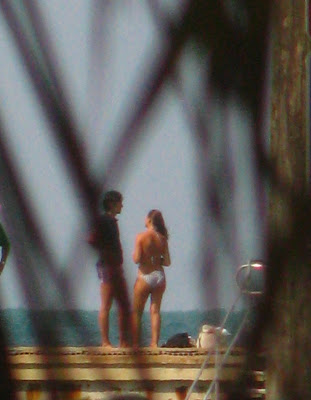 This is Conchscooter's idea of palm frond photography. Notice the nuance and texture and the colors. 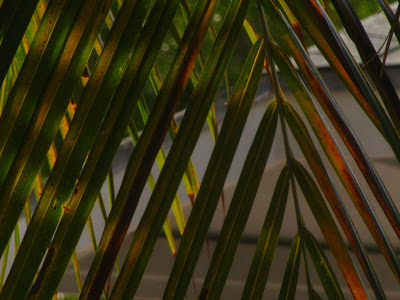 Clearly I need to spend more quality time with riepe to get these lessons right.
Posted by Conchscooter at 5:01 PM 2 comments: Links to this post

The African Cemetery has become a thing of beauty. 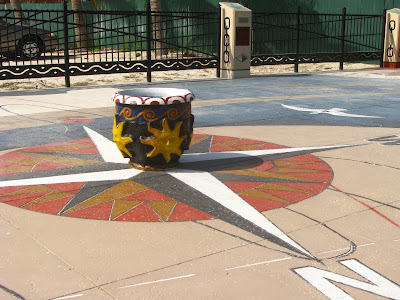 It's taken a while for this marker to be completed. It was created to commemorate the dead off a Spanish slave ship that was brought to Key West and it's unhappy occupants were forgotten by the US government and cared for by the local Post Master before the survivors were repatriated to Africa. Further up the beach the business of living was well in hand. I have no idea what this beach employee was actually watching but one has to presume it was bodies in skimpy clothing, as indicated by his attentive posture. 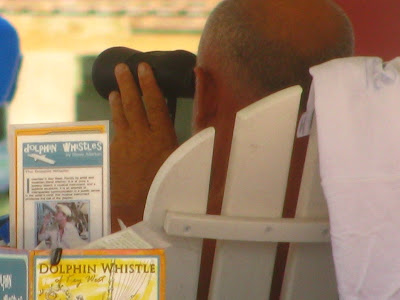 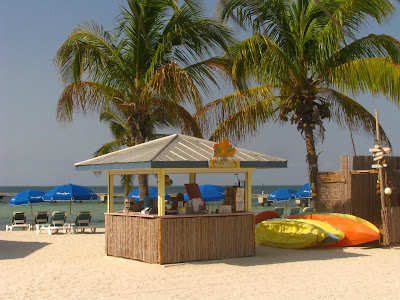 I am more hidebound in my adherence to rules than most people give me credit for, and it annoys me when people flout rules like these people were. Dogs are welcome all over the place in Key West including some bars and restaurants now. But at Higgs beach they are not allowed on the sand thanks no doubt to some owners' inability to pick up after them. Why these people had to run their dogs on the beach when the rest of the park is available, I don't know. 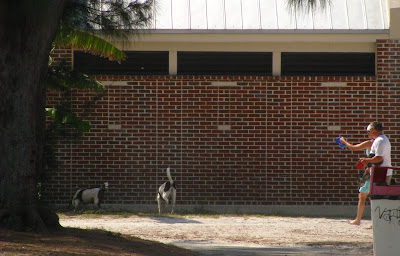 Oh well, people do the damnedest things and I wouldn't have a job if they didn't.
Posted by Conchscooter at 11:01 AM 1 comment: Links to this post

This is the sidewall of the tennis practice area next to Astro City. 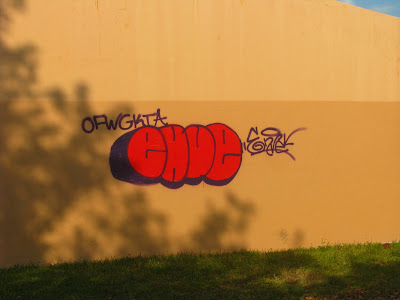 I am not much a fan of graffiti but this was a splash of color I could not resist. There is something crystalline in the air at the moment, as though the little rain we've had has cleared the air of dust and everything is crisper and clearer than ever. Key West looks lovelier than ever.

.But before we get carried away by cloying sentiment lets not forget that there are dogs at the pound that need homes and a sweet looking bunch they are. I'd take 'em all if my wife and Cheyenne would let me. 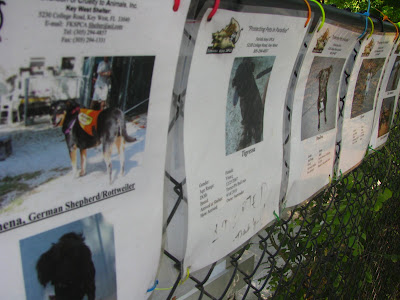 I first saw Cheyenne wearing an "Adopt Me" jacket just like the one Athena has on in the top left photo. Spotting Cheyenne stumping down Truman Avenue in the 2009 holiday parade was my wife's brilliant deed of that winter. These photos of dogs needing homes are posted at the dog park of course. Just enough to pluck the heart strings. 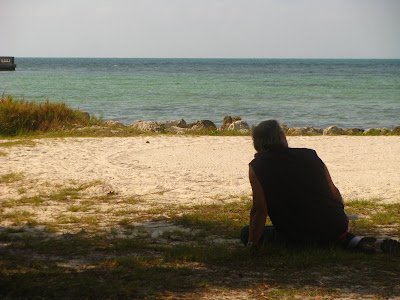 If you need to think you can do worse than find a spot of shade somewhere at Higgs Beach and take a look at the horizon. 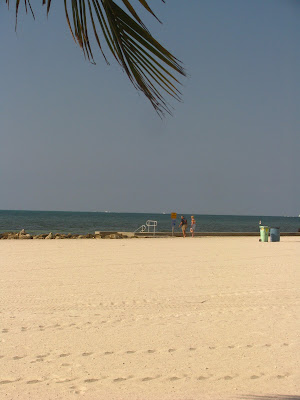 The colors all around town are astonishingly intense at the moment.
Posted by Conchscooter at 5:01 AM No comments: Links to this post

There is a part of me that greatly admires the people that live on the streets. I have no idea how they do it. I got stuck for a couple of hours at Higgs beach and even though I had the newspaper and my dog and my camera for company the prospect of sitting around day after day doing absolutely nothing fills me with dread. And then there is the living publicly shuffling your possessions around for all to see. 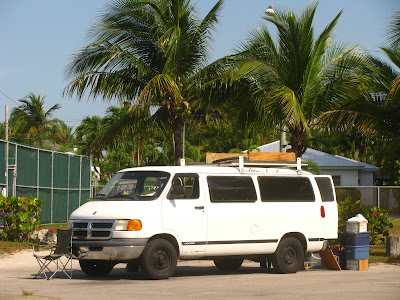 Homeless people get no respect either. We are afraid of them and afraid of becoming them so we ignore them. I can't imagine how great that feels. 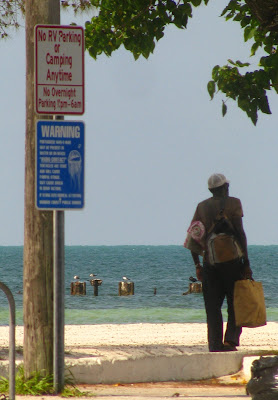 The problem in Key West is that so many of the street bums are that by profession as it were. They tend to hang out in parks and put other citizens off using the facilities. I saw this motorcycle breezing along with all his bags and I figured, ironically it was $20,000 of machinery that separates him from the bums walking their possessions! That and a different attitude no doubt. Oh and a job maybe... 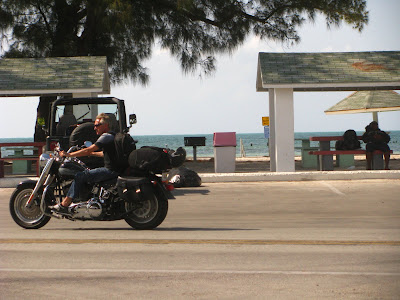 If you think parking issues are intractable in Key West the homeless issue is just as bad. A lot of comments in the paper point out St Augustine doesn't have the same transient population, but one could equally point out St Augustine, as pretty as it is, isn't nearly as vibrant and colorful as Key West. 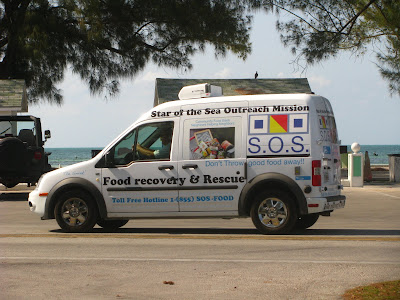 I was reminded of all this when the food van drove by checking, I presume if Salute, the Italian restaurant I enjoy so much, had food to give away. I think it is one of the better programs offered in Key West operated by the Catholic Church. Some people argue that the homeless are attracted by soup kitchens but I have to imagine that as indolent as they may be, the residentially challenged are drawn to Key West as much by the gorgeous climate as are those of us with houses and jobs and all appurtenances of respectable living. And I am not bored, never in life.
Posted by Conchscooter at 12:01 AM No comments: Links to this post