Spirit died April 14th after 14 years riding the roads of the US in Ara Gureghian's sidecar. He was an another of those  unloved abandoned dog that found a home and second chance and made the most of it.

I never met Spirit though I communicated early on with Ara who quit his life's work as a chef in Naples five hours north of here and took off in 2006 to ride around the US in a BMW sidecar outfit. His travels are recorded on his blog filled with pictures and commentary, a place he called his Oasis. More precisely the Oasis of his Soul. Spirit was his relief.

Like any man who has completed three score years and ten Ara has had his share of difficulties coping with the very premature death of his son Lance, then his mother who made an appearance in his blog and now Spirit, the throw away dog who proved once again that dogs abandoned by humans always have the capacity to overcome given a chance and thrive. I see so much of Rusty in Spirit.

What a great dog. I can't imagine continuing suddenly without your constant companion. Check Ara's page to see how it's done because Ara even with only memories of Spirit is unstoppable. I feel a tremendous sense of loss that I never met Spirit and now it's too late. 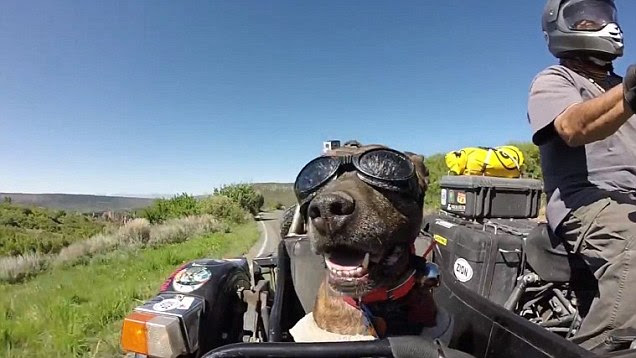