I have mentioned previously on this page the group that I belong to call the Iron Butt Association, a sort of club whose membership requirements are simple but tough: ride a long distance in a limited time and do it safely. I did my firs in 2009 and covered 1000 miles in 21 hours on my Triumph Bonneville then I got ambition in 2010 and I rode 1500 miles in 35 hours and 45 minutes in October freezing myself half to death trying to reach Binghamton New York.That was much harder, the first ride was a boring piece of cake...Bonneville in the Catskills touring after the Iron Butt: 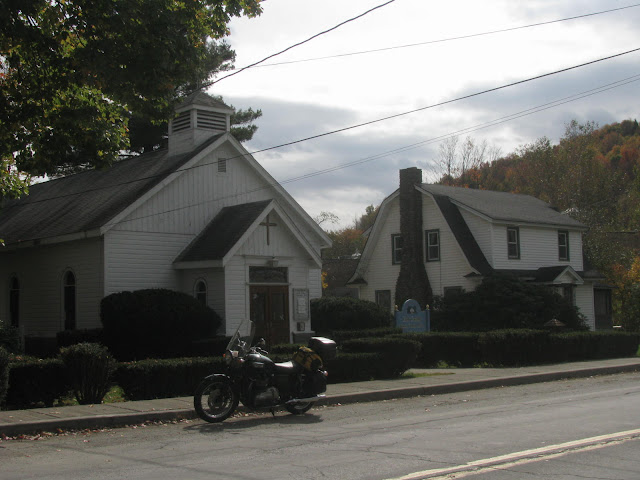 After Hurricane Irma put paid to the Bonneville last summer, and after a doctor told me I was developing arthritis in my left wrist I sold my geared Vespa P200 and bought an automatic scooter I had long had my eye on. One that should be great for commuting 25 miles along Highway One to my job in Key West where I answer 911 at night for a living, and have for the past 15 years. The Burgman 200 was described in the literature as lightweight and peppy and some journalists wondered why you might need a bulky 400? I am always a sucker for trying to do more with less and I liked a lot of the features of the Baby Burgman. I found one in Tampa lightly used for three grand I rode it home the long way, 900 miles around the state of Florida on my weekend off. 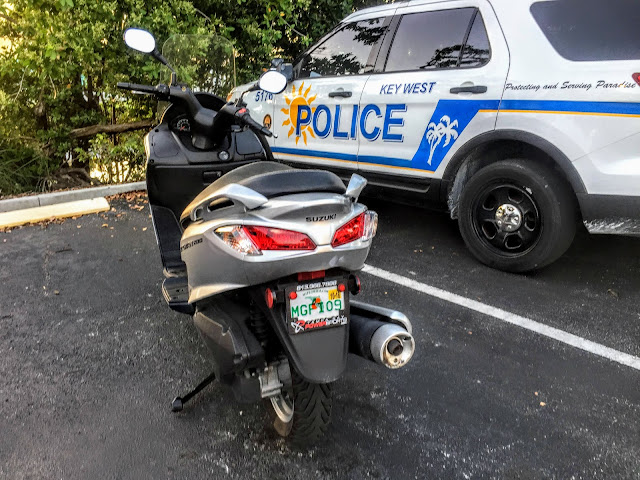 Great commuter, holds its own against cars, gets 75-80 mpg, comfortable easy well protected in the rain and so much storage no need of a top box. Perfect. Naturally me being the one who likes to push boundaries I started wondering...what if...an Iron Butt? Nah. 200 cc? Hmm, I wonder how it will do going up hill..? On I-95? MY wife who knows me shrugged and said be careful and I started measuring 1500 miles from my home in Cudjoe Key.  Hey!I've never seen the Niagara Falls, I guess this is my chance! Spoiler alert: I got there but did I do it in 36 hours as mandated by the Iron Butt people? 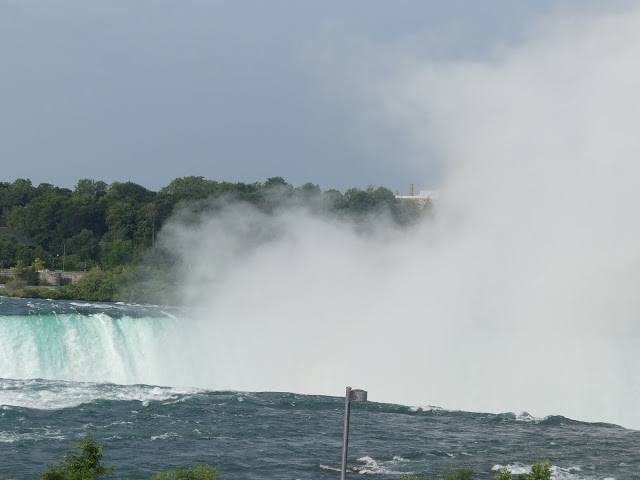 I am a believer in preparation and  doing as little as possible to modify the ride before I leave. I like to test everything so I don't have to think while riding. The only thing I didn't figure out ahead of time lies in pieces on the New York Thruway...  I bought a tail bag to carry useful extra stuff, snacks,camera man purse sweater and odds and ends with a little room left over in case I bought a sandwich or a can along the way. The Chase Harper 4000 cost around $70 fit perfectly and simply on the pillion part of the seat. It never budged never leaked and though described as rain resistant it is, in my book waterproof. Fantastic and I don't have to ride around with it like a topbox when I'm not traveling. 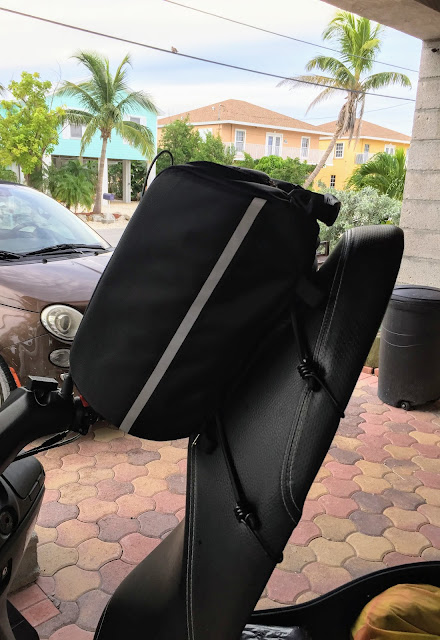 Four built in bungees and there you are. 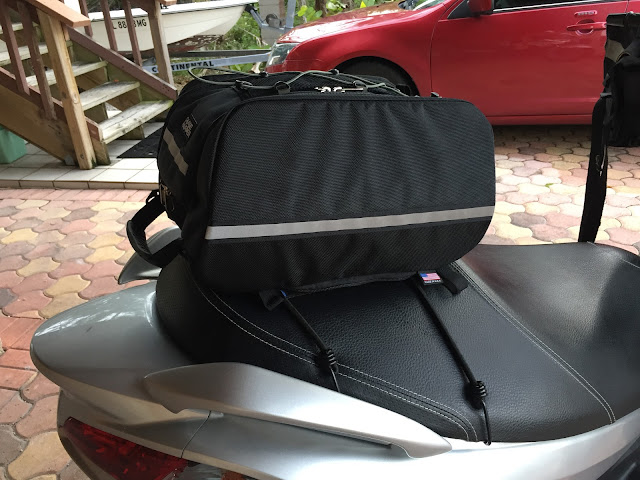 I used a carabiner to secure a 30 ounce MSR bottle under the elastic on top of the Chase Harper and though I never used it, it gave me peace of mind the two times I tried to stretch the gas too far, once in the mountains of West Virginia and once in the Everglades coming home. 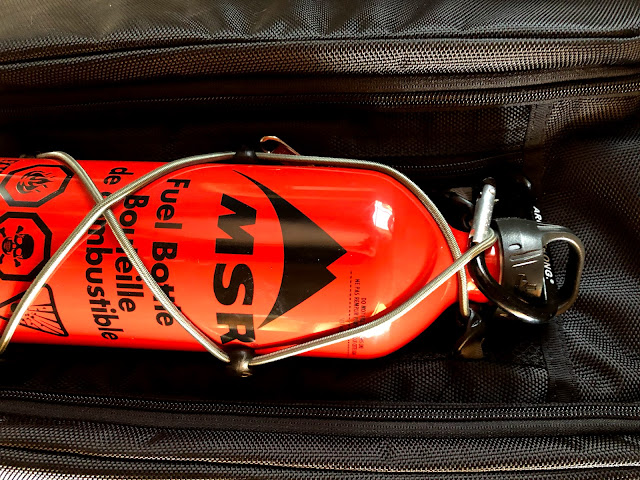 To secure my phone I used the Quad Lock, completely unobtrusive and brilliant and in the worst potholes the phone never budged in 3404 miles. 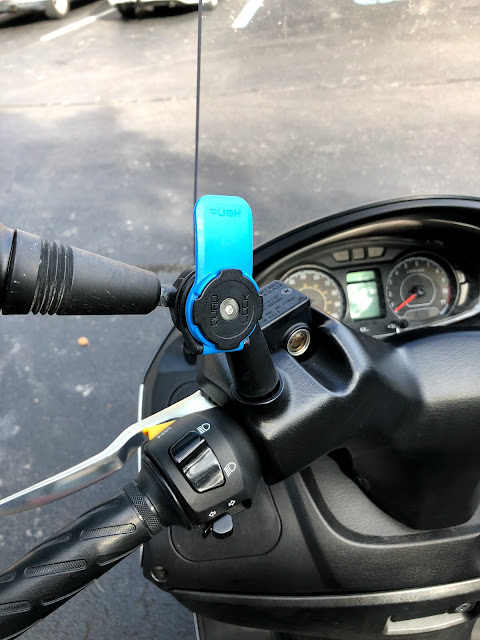 Funnily enough I would start hallucinating as I got closer to Niagara that the phone was slipping on its mounting but that was never the case. Just me being tired. 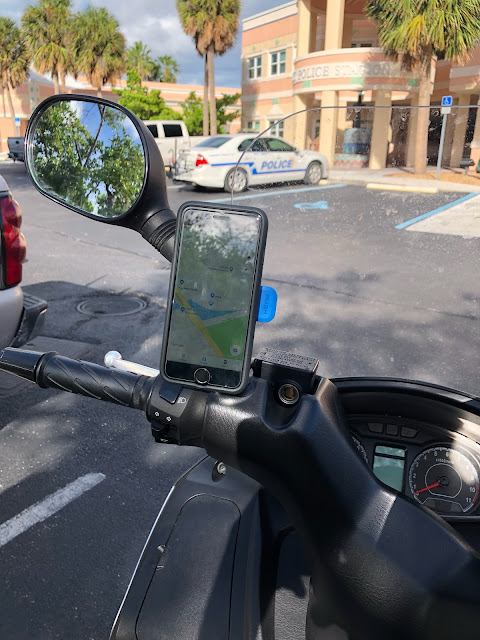 I ran a cord as needed from the 12 volt plug in the glove box up to the phone, a new iPhone 8 which has massive battery capacity. An inmate on ADVRider recommended this stuff (below) so in additon to an electric pump and flat repair plug kit (never used) I filled the tires with goop. Got no flats...had a power pack under the seat along with the recently removed old drive belt. The scooter got a massive tune up at JR Motorsports on Stock Island and I was ready the Friday before departure, set  for 10am Saturday 18th of August 2018.  The condemned man walked his dog one lwast time and ate a hearty breakfast. 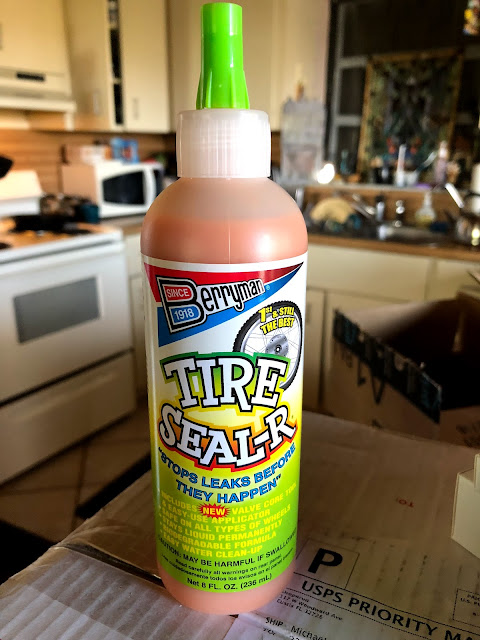 There was no help for it, I left and stopped three miles up the road at the Shell station and got my first receipt. I didn't notice but the clerk gave me a receipt timed 20 minutes earlier than mine should have been. Not only was I riding a mere 200 cc engine, the gods were against me too.