Robert  loaned me his power washer to clean up my boat which has been idle on it's trailer for several months, but as he put it, actually staying over to help was an excellent excuse to procrastinate on several of his many pressing projects. When I retire in a few years I plan to limit my projects, Robert has more than he had when he was working. 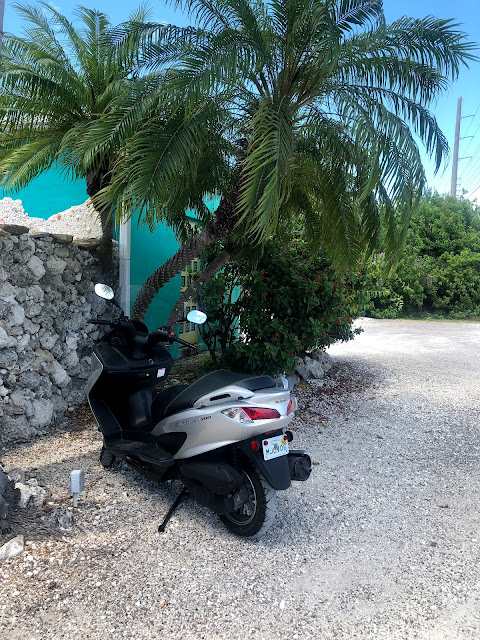 I bought him lunch so I met him at Bob and Lu's (under new ownership fro a long time  since the original pair sold the place) in Big Coppitt. I arrived before Robert so by the time he arrived our sausage and spinach pizza was already cooking. We are creatures of habit, and Robert after much investigation thinks this may be one of the best sit down pizzas around, so we don't change a winning team. 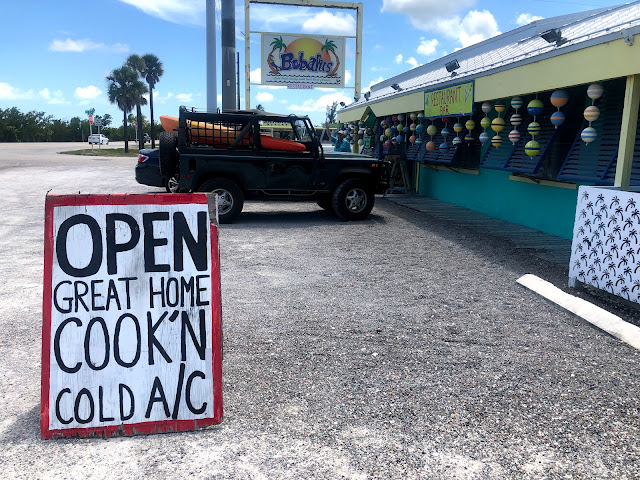 I was impressed to hear Robert has mastered the use of snow shoes. This may not sound like much but his wife likes to ski so they spent several cold months in Utah where they also got involved in projects, which knowing Robert was impossible to avoid. For some reason biologists feel the need to count owl nests and the only way to get to them is to do the frozen equivalent of walking on water, hence the snow shoes. Robert moved to the Keys from New England in 1976, an easy year to remember, and he watched the Bicentennial Fireworks from the deck of the boat he was living on. He was in fact living the Keys life and continued to so do for the next 40 odd years. 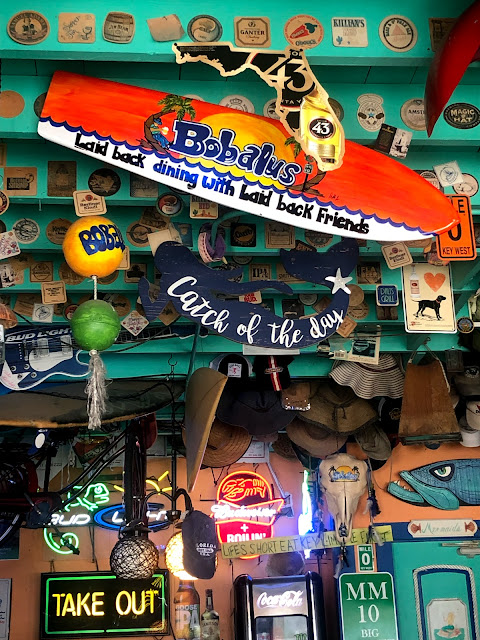 I suppose inevitably one must want a  change and a life lived in the Keys could not be contrasted more strongly than by a winter spent admiring mountains  and snow from a new fangled housing development. The idea of living surrounded by modern shopping conveniences is a whole new thing for Robert whose previous long forays out of the Keys were sailing in places even less shopping friendly than the Keys; places like the watery wilderness of the out islands in the Bahamas, reachable by boat. In Utah Robert has a major freeway access five minutes from his home. It can be startling to find yourself hurtling down a multi lane highway so close to your home after you have spent decades three hours from the nearest metropolis. 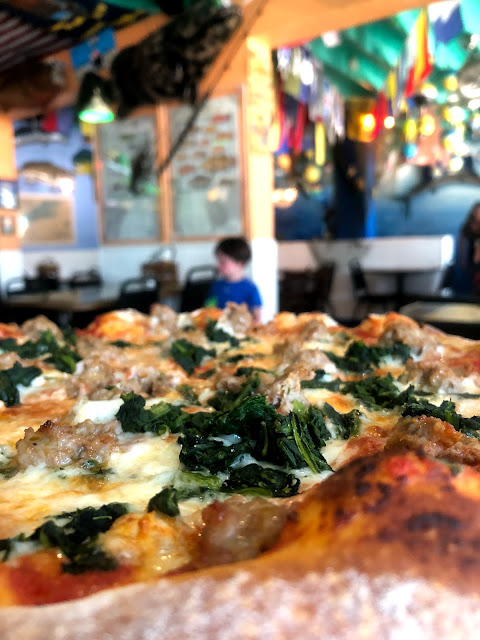 We took ages to demolish the pizza, over conversation about driving the perilous trails in Bear Ears National Monument, the wild sandstone sculptures in the Utah desert and exploring Antelope Island in the Great Salt Lake. All I remember of Utah is the ghastly sulphur smell of the lake under a summer sun, and I also recall being surprised by how small the cathedral was which is at the center of the universe for the Latter Day Saints. I guess I compared it to St Peter's but I didn't mean to be a snob, it just looked small tucked into the center of  that historic city in Utah. 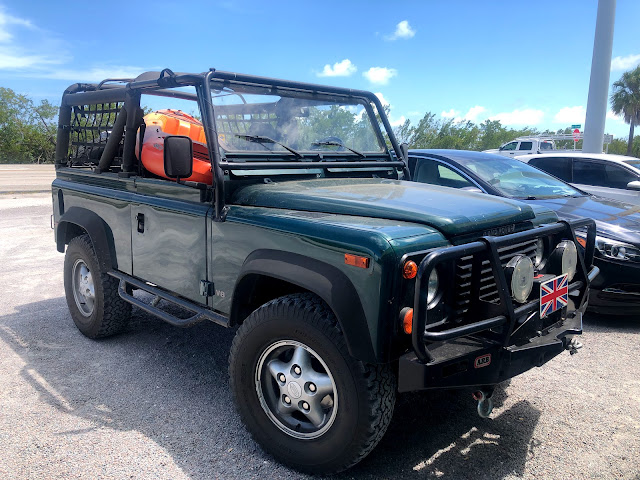 Outside Bobalu's in the heat of the afternoon stood my sister's favorite vehicle: a Landrover, a vehicle that looks slightly ludicrous to my eyes when driven in these domesticated slivers of flat lands that don't merit four wheel drive. I dutifully sent a picture to Scotland and by return of Messenger got a picture of my sister and her daughter eating fish and chips inside their Landrover in an effort to avoid a freezing wet June day in northwest Scotland. 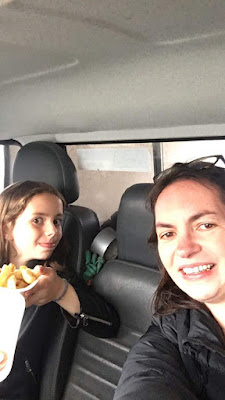 Luckily I was full of hot Florida pizza but Ullapool boasts a first rate chippie which takes the edge off living in the wettest place in the United Kingdom, a place where 70 degrees is a heatwave. So I had to walk off sausage pizza with Rusty on another 90 degree afternoon. The intersection in the background is another view of the scene of my accident looking at it from the direction of the woman who drove out in front of me onto Highway One. I live too close to the spot to be freaked out by it, but it's always there. 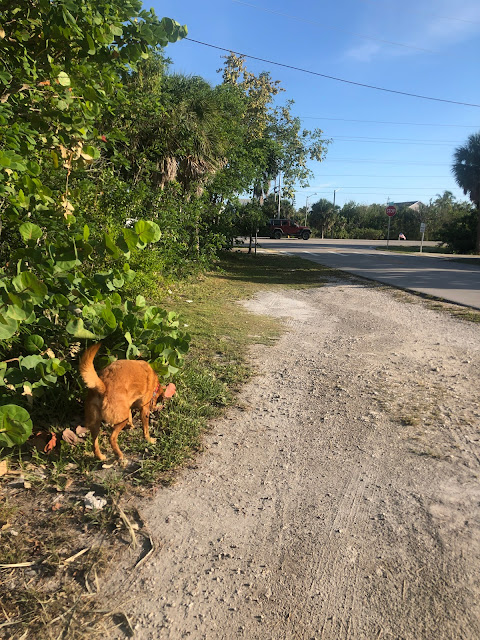 Pondering the toughness required to farm in Scotland I came across a couple of tractors. These are not vehicles commonly seen in islands who boast not an acre devoted to commercial farming. If pressed I would have thought of the solitary tractor used to clean the beaches in Key West, as the sole such vehicle in the area: 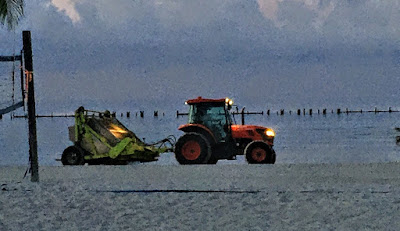 And I would have forgotten these useful tools for cleaning the edges of the roadways in the county. 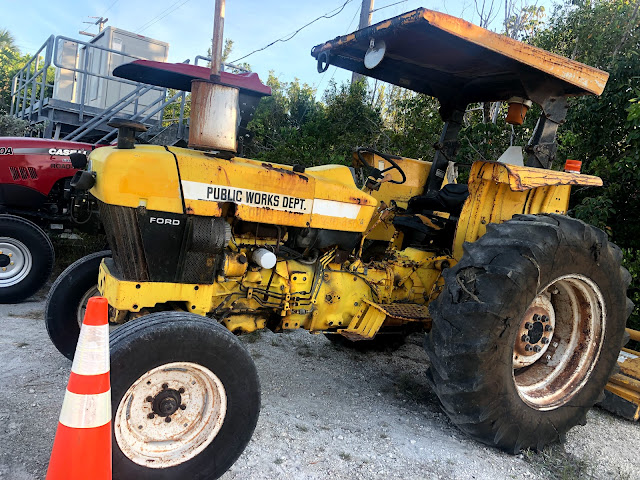 I prefer the old tractor as it reminds me of the farming of my youth, an occupation I couldn't escape from fast enough, and from which California did not seem far enough away as a destination to emigrate to; however my family seems to enjoy tilling the soil and tractors are part of all their lives in the Old World. 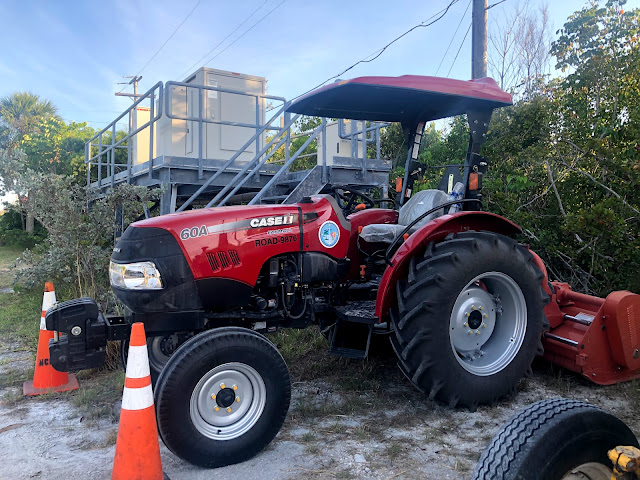 I'd rather drive a tractor if forced to choose between that and wearing snow shoes.
Posted by Conchscooter at 12:00 AM 3 comments: Links to this post