The heffalump shown below was I hope expressing a nice touch of irony on it's tag which described it as a Key West buggy. The fact that it bulged beyond the containment lines of it's parking space was enough I thought to show the ironic intent of the label. 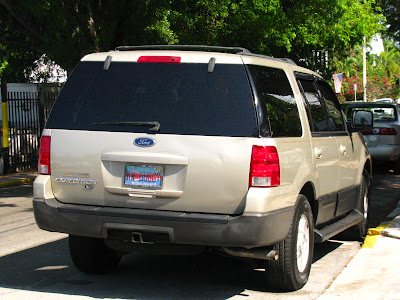 I find it surprising that operations as simple as dog hauling or grocery shopping or school busing these days require huge cars in the minds of many. I have always found this massive lumps uninteresting to drive and I expect I am not alone as so often their operators can be found behind the wheel doing anything but driving. The relaxed way of life that allows transportation to be reduced to a magnificent pair of suspenders and bulging saddlebags has to to be not only admired but envied. The gent in the picture below reminds me why my Bonneville commutes are an indulgence. 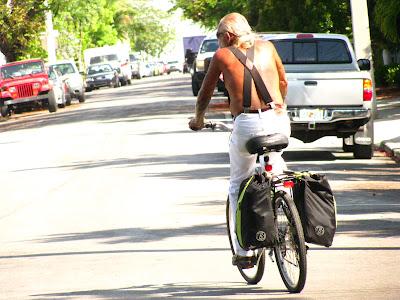 I probably put many more miles on the Triumph motorbike than does the impeccably turned out heffalump above, and the House of Saud thanks me. But here below is the true Key West Buggy, and I don't mean the exhausted Cheyenne. 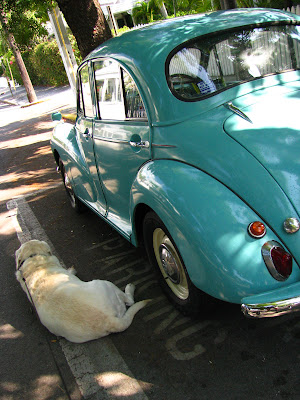 The old moggie (Morris Minor) was built between 1948 and 1971 as one of those post World War Two means to get Europeans mobile, much as the Fiat 500 did in Italy. A Morris Minor was in fact the first car I ever drove at a friend's farm round a rather bumpy field when I was young enough that seeing over the steering wheel and reaching the clutch pedal simultaneously was a bit of a problem. I envied him enormously a father who would buy my friend an old banger to romp around the farm in. 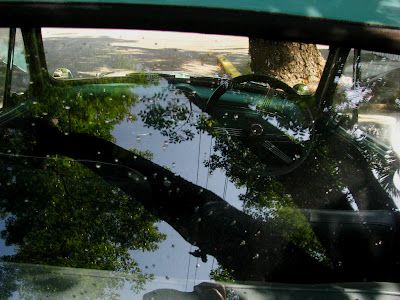 This curiously eccentric old car with steering on the wrong side and still respectable fuel mileage today really does represent in my mind the perfect Key West Buggy. Scooters are always respectable even if renters frequently fail to use them correctly. Like this lot at Garrison Bight Marina Friday. 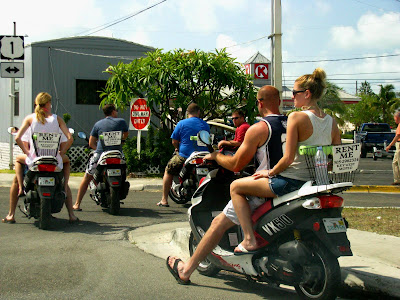 Faced with a selection of streets in their immediate future they clustered together to talk options in the middle of the street. I was waiting on Palm for the left turn light at North Roosevelt and I watched cars stop and wait as they decided their course of action without having the wit to pull off into the ample parking lot behind them. Oh wait! It says Do Not Enter! Silly me.
Posted by Conchscooter at 9:01 PM 4 comments: Links to this post

It's the Memorial Weekend in Key West like it is everywhere in the US but in Key West men wear bras to mark the holiday. 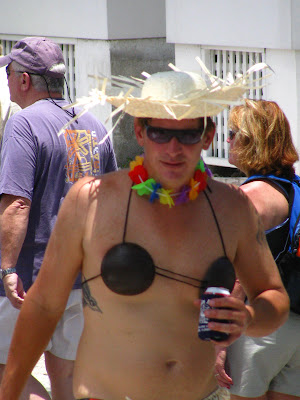 The good news is women wear their underwear in public too, so I felt obliged to take some pictures for posterity. 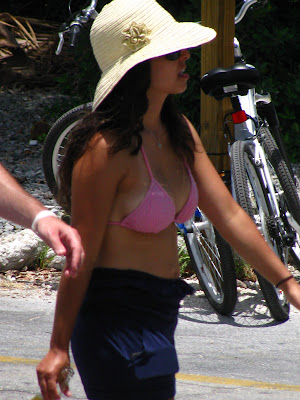 My proclivities as a dirty old man come in for much scorn from readers who think staring at young women who wouldn't look twice at them in real life is a macho thing to do, so I offer this taste of what's to come with all due humility for the undoubted shortcomings. 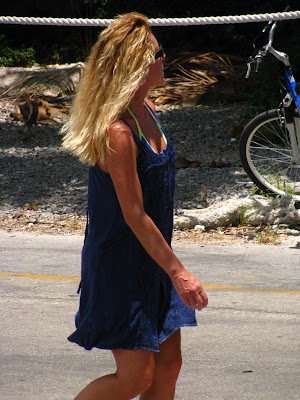 These absurd pork pie hats are appearing everywhere on top of young touristas, so I am forced to think they look more suitable on Madison Avenue and in Beverly Hills than they do at Schooner Wharf Bar. 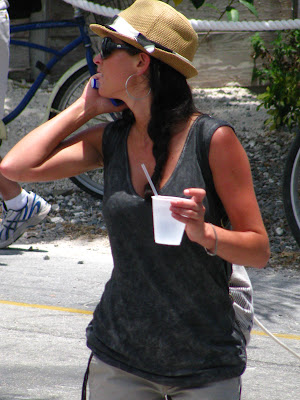 Speaking of Beverly Hills I rather enjoyed the babes of Big Pine Bay Watch. 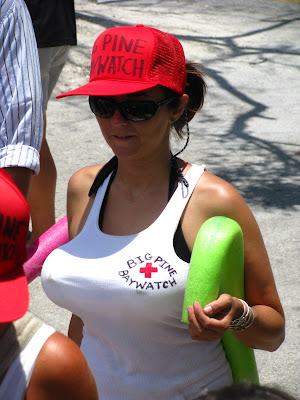 The silliness of getting grown men and women to take to the water in home built craft composed of inadequate materials like duct tape and plywood is to raise money for Veterans on this Memorial Day. 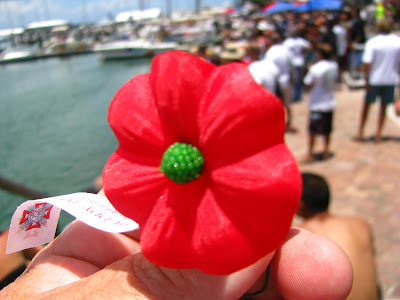 I bought my poppy, symbolic of the blood red poppies of Flanders Fields that saw so much loss of human life in 1914-1918. 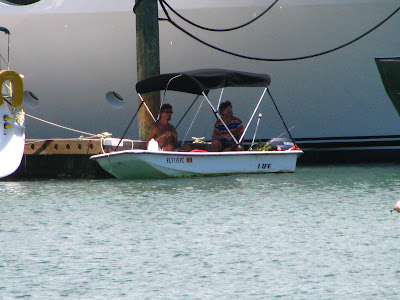 The actual boats themselves were of less interest to me and in any event despite the rumored presence of CNN the race took an age to start. I'm working tonight so I couldn't even drink beer to assuage the boredom. I went home and took a nap instead.
Posted by Conchscooter at 5:01 PM 10 comments: Links to this post

I thought this sign looked like a great idea. I have my own personal nerds on Sugarloaf Key to help me with my computing issues but the idea of help a short scooter ride away looks very appealing. 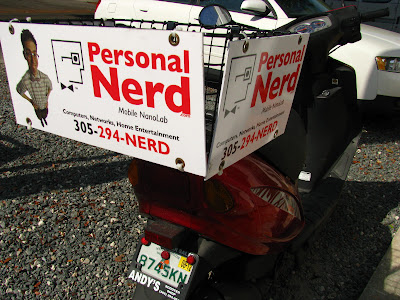 I checked the website and it seems to be some sort of franchise operation that can work with people or businesses. http://personalnerd.com/ A brilliant idea especially for people like me who pine for typewriters and rotary phones... 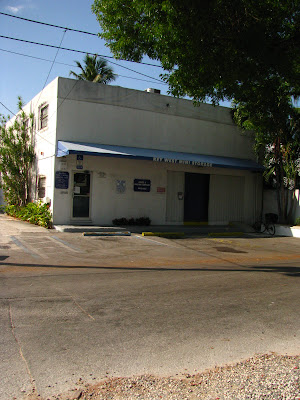 It's all about useful services is Virginia Street including the mini storage building. It never ceases to amaze me how businesses and people in Key west adapt their plans to the lack of square footage on the island. On mainland USA a storage business typically is huge, here it's a secure building which would look especially good when hurricane season is upon us (June 1st is the officially start day for that). 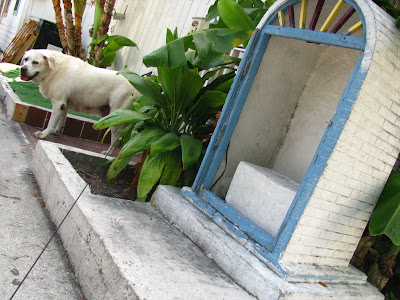 Failing solid storage one could use a shrine I suppose for hurricane season. This rather attractive one was empty and unloved when we walked by, Cheyenne and I. I couldn't help but notice the yellow bike and yellow flowers in some sort of psychic connection. So I took a picture. 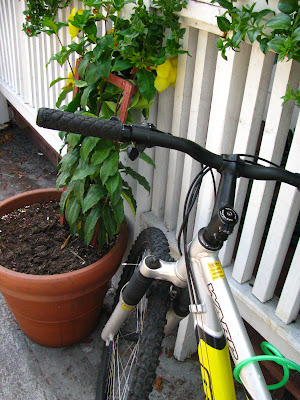 One has to wonder from time to time what a passer by would think if they noticed a man being pulled by a dog photographing at random whatever falls to hand.
Posted by Conchscooter at 12:01 AM No comments: Links to this post