I think of it as new but the H2O Suites hotel on Simonton offers watery rooms and has been so ding for a couple of years. Apparently you get a plunge pool with your suite and a rooftop bar witha swimming pool for all guests to enjoy when they aren't stepping out onto nearby exciting Duval Street. 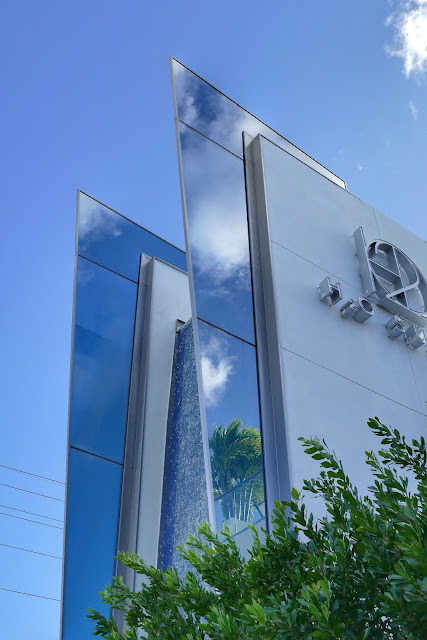 It doesn't look exactly the sort of architectural style Old Town Key West is known for but it does catch your eye. Well it caught my eye; other people  have to spend a lot of energy finding their way. 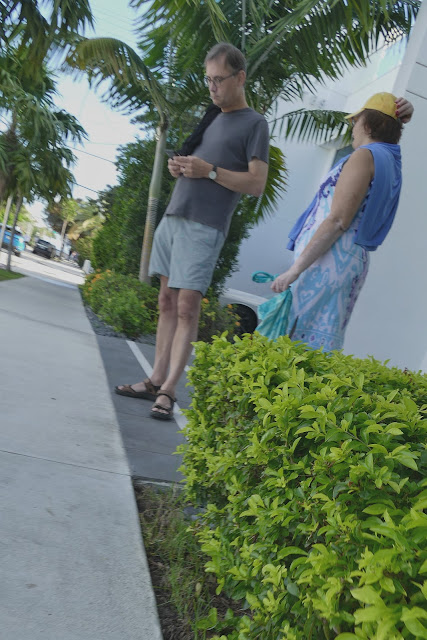 Bright sunshine is supposed to be the time of day people with cameras avoid going out into the noonday sun. I like bright sunshine and I find that even with my camera bright light and dark contrasts make me happy. I do like the clouds to be interesting where possible but even a clear blue sky can turn into a backdrop that looks right sometimes. 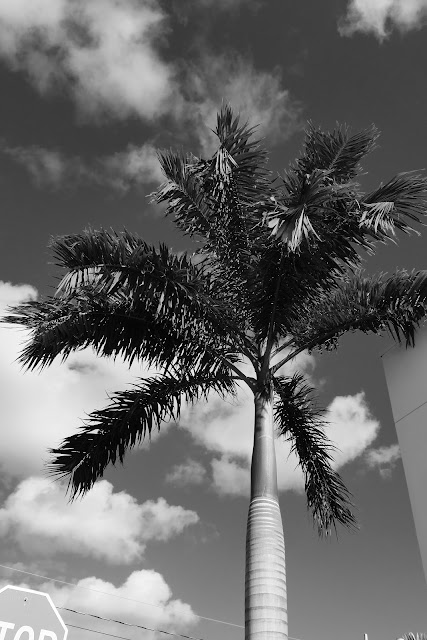 If I had to wait around for gray skies, fog and drizzle and overcast I'd never go out with my camera. 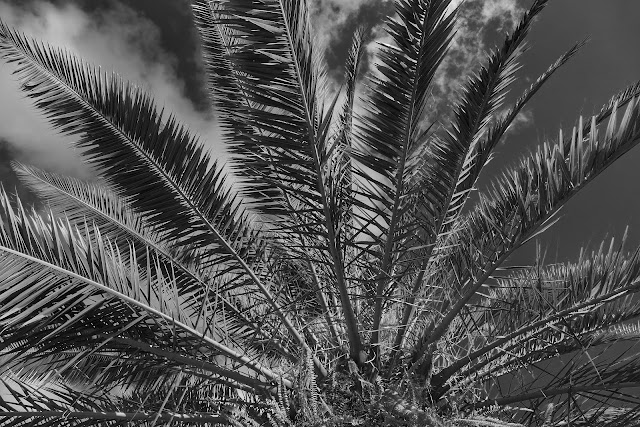 The Italian restaurant on Simonton Street, Abbondanza, has found a way to discourage undesirables from camping out on their comfortable bench. They have removed the seat. 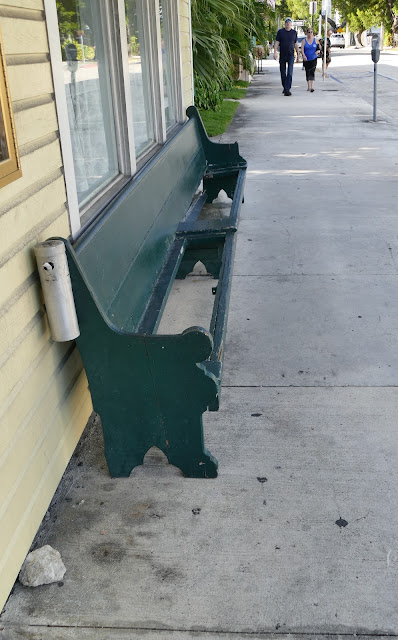 I found it inside the front doors ready to be installed fro guests when they start dinner service at the restaurant. It's how you take the imitative to manage your affairs when you are bothered by people hanging out. Pretty smart and self reliant. 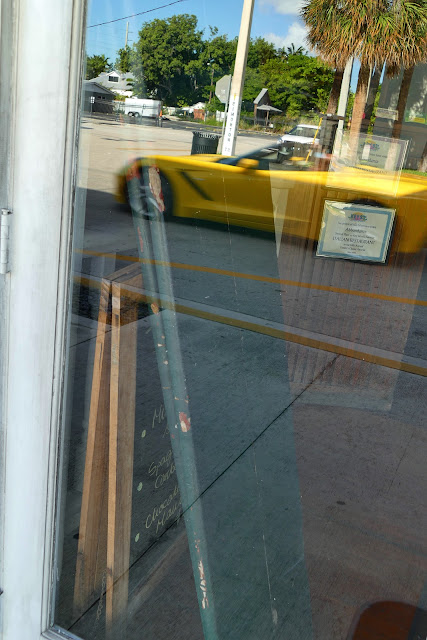 The bright sunlight gave me a chance to nail some lizards relaxing and soaking up the rays. 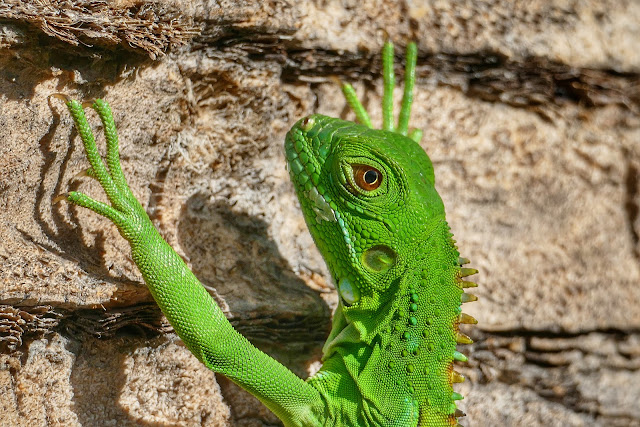 Neither of them seemed intimidated by my camera pointing at them and the FZ1000 has a pretty big lense when it's pointed at you. 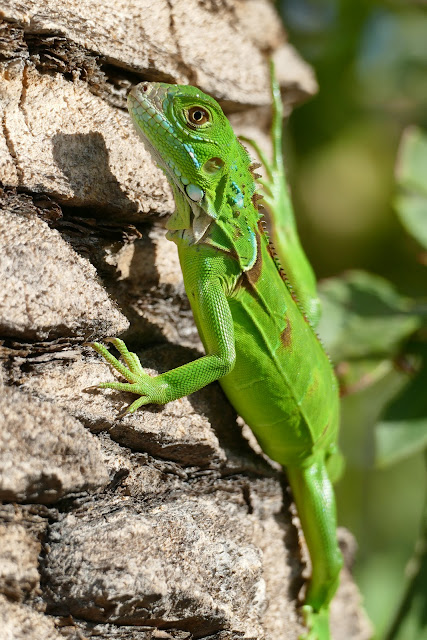 I don't often get the chance to hang out with stationary relaxed lizards so I gave them the treatment as they clung brilliantly to the palm. 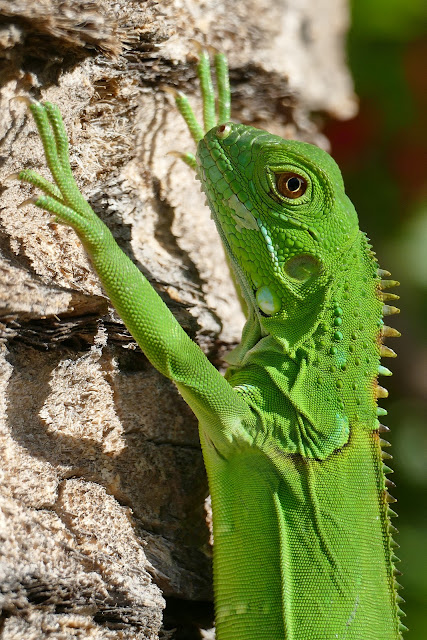 And while we think about wild tropical animals we can't ignore the ever present, ubiquitous wild chickens of Key West. People say they were brought from Cuba to be used as betting tools in fights, which never made sense to me. I've looked  at photos and paintings made in the early 20th century of Key West streets and there are no chickens to be seen. I suspect they were domestic creatures that just escaped and came to be accepted or ignored until they became darlings of the tourists. But that is a much more rational and uninteresting story than making them out to be descendants of prize Cuban fighting roosters. Perhaps Cuban roosters have figured out a way to reproduce than no one knows of, but I prefer rational thought to make believe. Boring is Me. 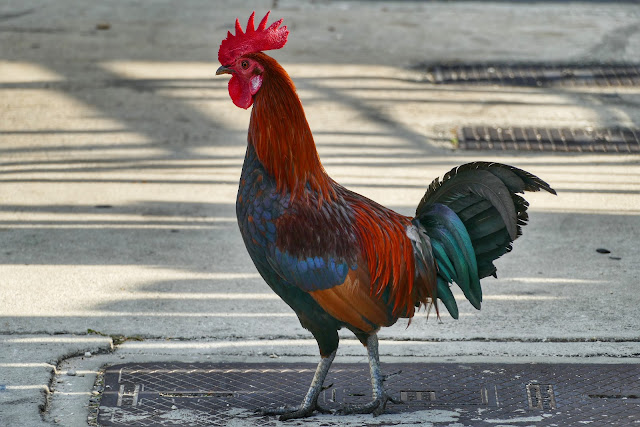 Posted by Conchscooter at 12:00 AM 4 comments: Links to this post