This essay from December 2009 is a reminder to me and you to pay a visit to the Dry Tortugas 70 miles west of Key West. 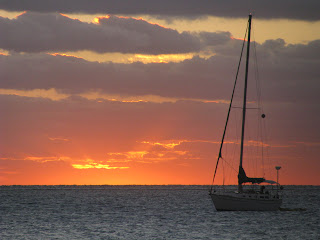 Sunrise at the Dry Tortugas National Park. I took these pictures while on my last trip to the island known as Garden Key, home to Fort Jefferson built around the period of the Civil War. The coaling docks which were built on these pilings were added in time for World War One: 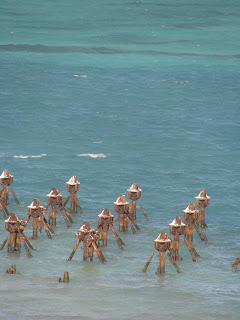 Nowadays they make for excellent snorkeling. The fort and it's moat on the east side of the island, looking southeast: 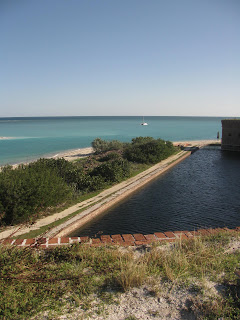 On the opposite side of Garden Key there is Loggerhead Key (named for the turtles that used to reside there in abundance). The lighthouse, three miles west of Fort Jefferson is the last speck of land before Mexico some 300 miles west. National Park volunteers staff the lighthouse and live on a house there, weeks at a time. The only access is by private boat with a dinghy landing on the beach. The Park Service supplies the volunteers at their private dock on the east side of the island. 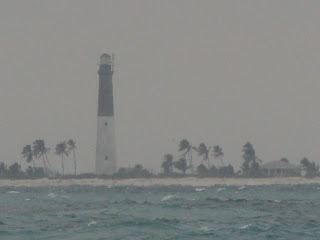 The fort itself has a bunch of antennae, including satellite access to television and Internet for the National Park personnel stationed there. There is a satellite payphone (by credit card) on the dock for the public, but cell phones don't work on this island 70 miles west of Key West. 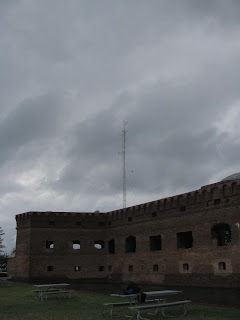 Next door is Bird Key, separated by this strip of water that was filled in, then emptied in turn by hurricanes. The island is closed to the public as it is a nesting ground for migrating birds. 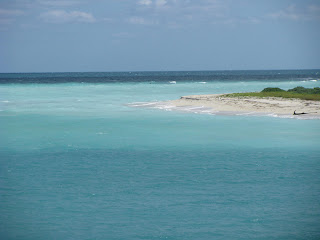 Fort Jefferson is a speck in a very large ocean. A surprisingly civilized speck all things considered. 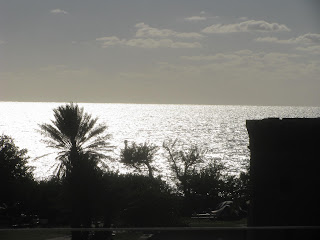 They say the place is constructed out of 16 million bricks, imported from Up North from two different factories which explains the two different shades of red of the bricks in the outer walls. The top of the wall is a grassy, sandy walkway. 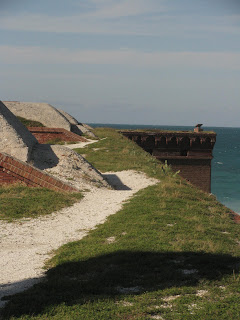 The five acre interior of the fort, whose construction plans were never completed, is like a park: 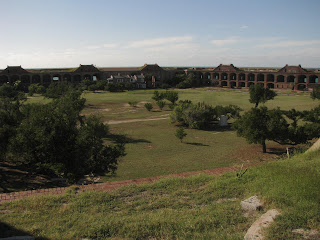 Some reconstructive surgery has been completed to prevent buildings, like the domed powder magazine from crumbling. 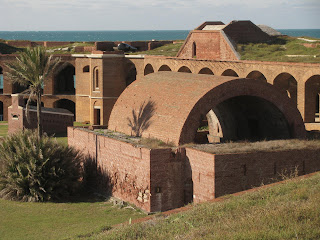 Looking southeast from the northwest corner: 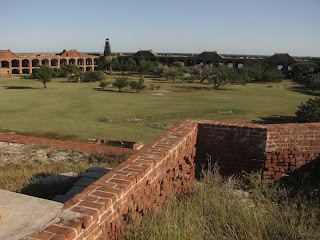 Looking east from the same spot one can see the rectangles of dark grass that show where the barracks were located and beyond them the domed powder magazine once again. This ancient fort looks more like a crusader fortress in Syria or a European castle than a North American building. 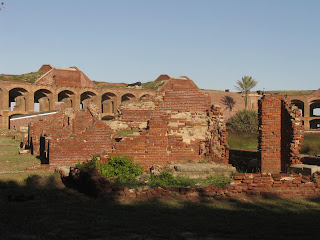 Darkness falls suddenly at the fort, as is the way at these tropic latitudes: 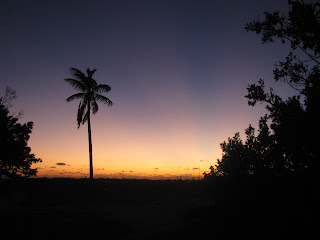 Campers and the National Park Rangers are the only people left on the island, after the ferries take the day trippers back to Key West, leaving at 2:45pm and getting back to the city around 5:15pm. For campers it's time to cook dinner: 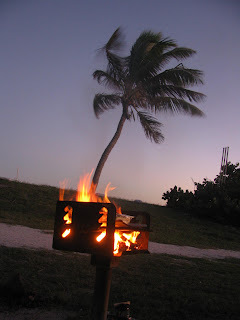 And every day succeeds the previous day in the same way. A view south from the main entrance. The covered building is the dock with an information room and some changing rooms for people who need a place to put on, or take off a swimsuit: 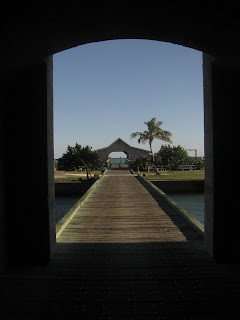 The other covered buildings are the composting toilets, four of them, near the campground: 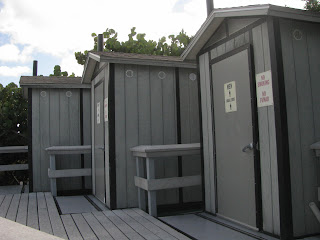 They work very well but are only available to campers after the ferries leave. While ferries are docked campers are supposed to use the toilets on board and only use these when the large number of day visitors have left so as not to overwhelm the island facilities. 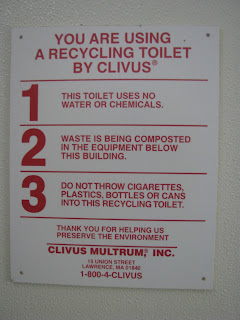 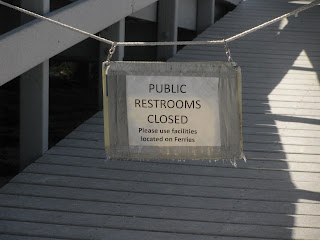 The fort is open during daylight hours and even when the ferries are docked there is plenty of room for everyone. After the boats leave the fort is a private place, and that's when the interior of the fort is one photo opportunity after another: 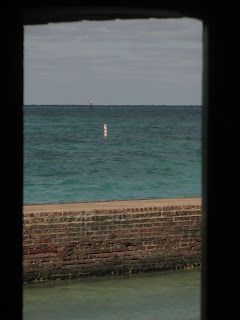 The moat wall was designed to keep marauding boats at a distance from the fort itself to give gunners time to sink enemies before they could get close, but it also keeps wave action away from the delicate foundations of this fort built on sand. Swimming is not allowed in the moat: 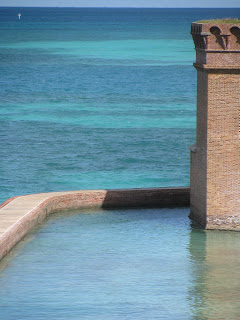 This is a US National Park so there are informational signs everywhere. My pink crocs are happily barely visible: 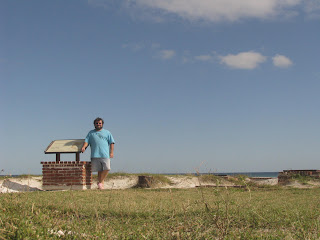 Bird Key beyond the eastern coaling dock pilings just visible in the foreground: 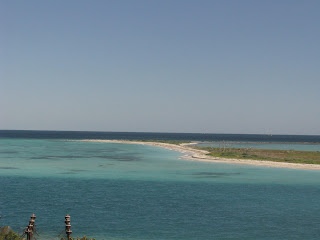 The unfinished windows in the case mates: 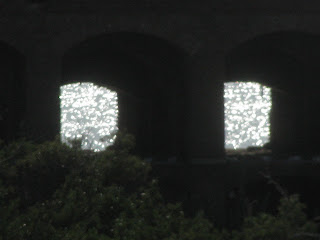 The US Coastguard downgraded the old lighthouse at the fort and now it's known as a harbor light. At night it glows with a steady yellow gleam and all boats at anchor in the National Park are required to anchor within one mile of this light: 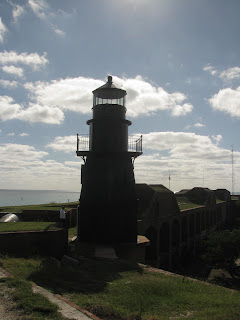 There are some bushes sprouting on the eastern side of the fort and among them I found this prickly pear... 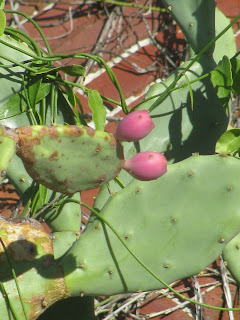 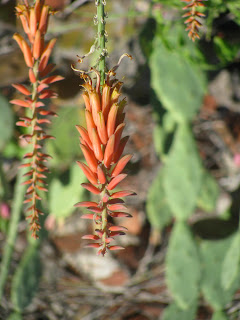 And here is a view from the salon of the Yankee Freedom ferry taking us home to Key West: 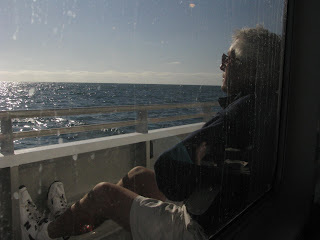 It costs $180 round trip on this boat but every trip to the fort is an adventure and an exploration.
Posted by Conchscooter at 12:00 AM No comments: