This is not a low stress moment in my life. The island laid back lifestyle has been thrown out the window, mixing metaphors, like a baby with the bath water. Work has been turned on its head by some renovations which are closing offices and moving equipment all round the building. My part is minuscule in all that but how the bosses are keeping a twenty four hour operation going like this week after week boggles my mind. 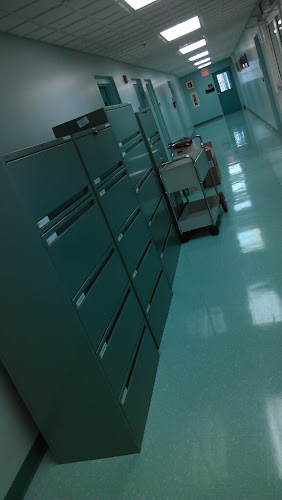 At home my wife has been packing our lives into boxes and I have been flexing my muscles ready to haul them to the new place. Which should have been happening yesterday except the wife's car had got buggered up. 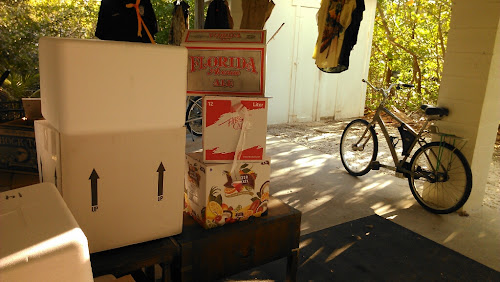 The 2004 Vespa has sixteen thousand miles and it runs like clockwork. 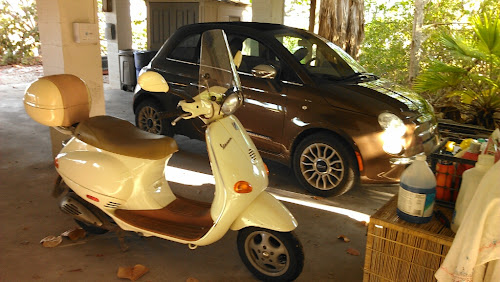 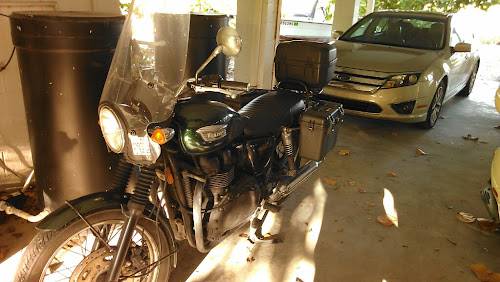 The 2013 Fiat Cabriolet has six thousand miles on the clock and it developed a couple of quirks. The trunk lift gate wouldn't open and the roof controls lost their pre-set stops, so opening and closing the roof required holding the button. In these circumstances Google is my friend and the Fiat 500 a Forum appeared on my screen advising lift gate problems are not unknown and the computer needs to be "re-flashed." Which sounds very rude but in the event I made an appointment with the largest Fiat dealer in the United States (they say) and drove three hours to Weston on my Monday off to get flashed. Nice. The manager's special was a hardtop 500 for $21,000, five grand more than my wife paid for her convertible. Rick Case must be rolling in it. 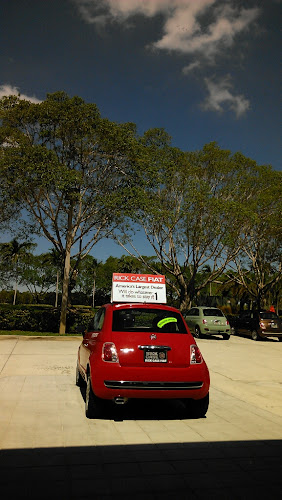 The showroom isn't terribly large but Rick Case got the franchise for several brands in Ft Lauderdale and it felt like I was driving into Case's own Disneyland, the happiest place on Earth as long as you are ready to be ravaged by salesmen and get in hock to own a car. They do make it look good, buying a Fiat, check out the original 500: 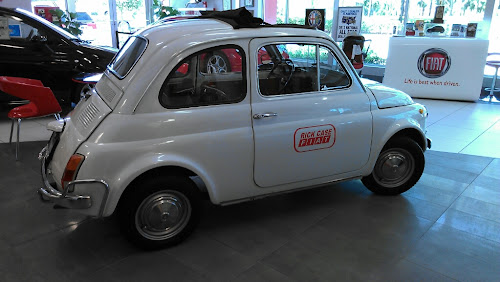 Italian grammar is not their strong suit. "Signore" is the feminine plural ( for "ladies") of... 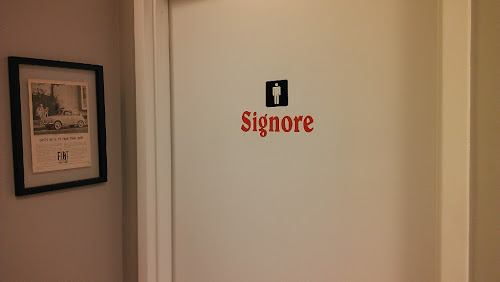 "Signora" which means a woman. "Signori" means "Men" but neither door was thusly labeled. So with my literal brain I had to pause for a long moment before I figured out which toilet was meant for me... 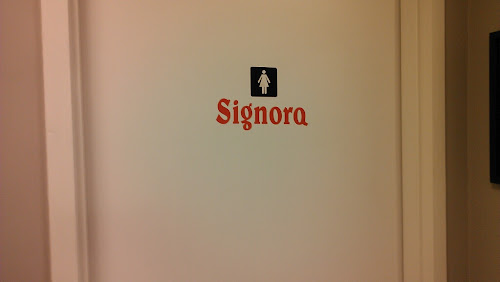 Once my bladder was relieved in the proper place (I think) I got my eyesight back and look what I found lurking in the Fiat showroom, an 8C Alfa Romeo! 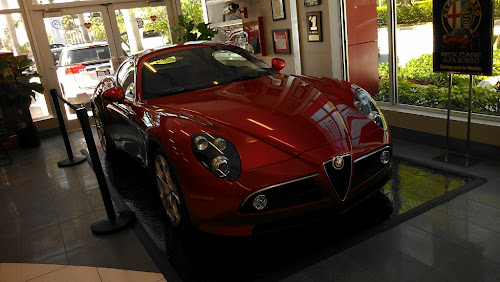 The young salesman told me 2015 models of the eight cylinder and new four cylinder Alfas will be for sale later this year in a showroom next door that will soon be under construction. One more brand for the ubiquitous, indefatigable Rick Case. 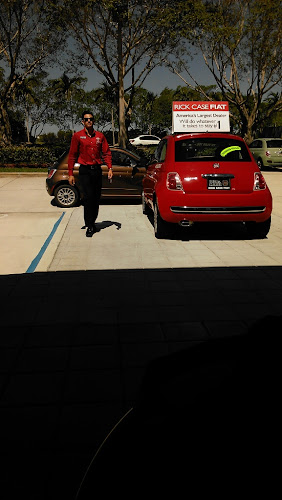 My Fiat was reflashed in less time than it takes to write and the roof opened and closed properly... 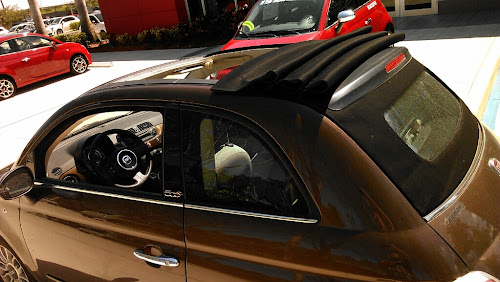 ...and the lift gate once again yielded as expected to the touch of the handle: Then it was time to dive back into the mainland crowds... 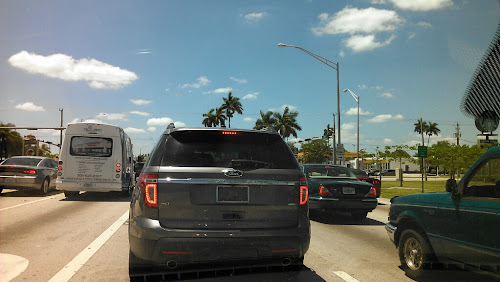 I stopped at Florida Keys Fisheries in Marathon and ordered a couple of lunch sandwiches from a seriously pissed off cashier, whose grumpiness did not overwhelm the deliciousness of the fresh snapper, one fried, one blackened. 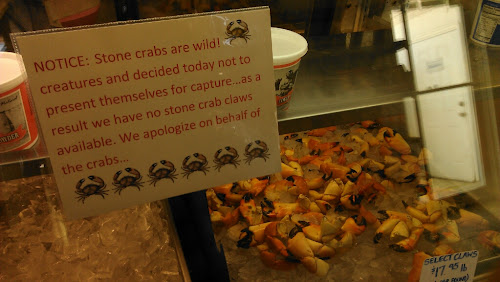 We shared the two sandwiches in my wife's office, and I left her the Fiat and took my Fusion home to a very grumpy dog. 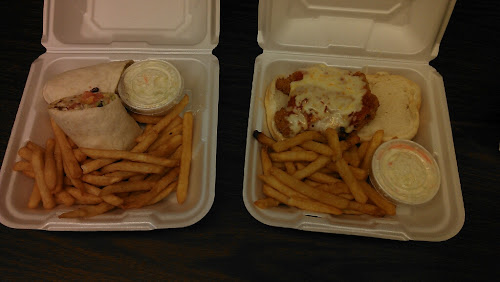 I left home at eight and got back at three and I don't think Cheyenne would have enjoyed the interminable driving. She seemed to disagree until I scratched her tummy for a good long while. 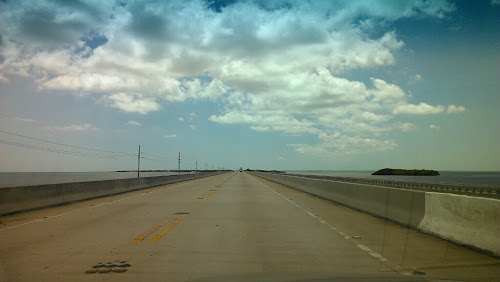 It was a tedious drive all right despite the splendid views, but it's what you do when you live in the Fabulous Distant Florida Keys; but at least we can get to what we need on the mainland. Even if it takes all day.

Posted with Blogsy
Posted by Conchscooter at 7:00 PM 3 comments: