I used to take Rusty around Duval Street to try to get him used to crowds and noises and for a while I despaired he would ever stop tugging and jerking at the leash at the least sound. Silly me, he's fine now. He does get squirrelly when he sees a large dog or hears a loud truck but he is become a confident little dog which makes the walks a pleasure. 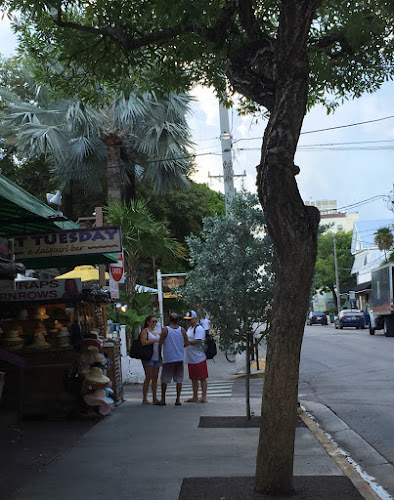 I watched the tourists in the photo above hold a lively conversation with the salesman between them. It's one of those things that fascinate me about Key West, how a transient society of bar workers, servers and ticket touts can create friendships with strangers that induce those people to feel like they have a stake in Key West. To me it's like the miracle of the loaves and fishes, a bar an sells a couple two beers, talks a bit with them, jokes around and they leave convinced they have a friend in Key West. And they keep coming back, and those first two beers become a lifetime supply of sales. It truly is a miracle. 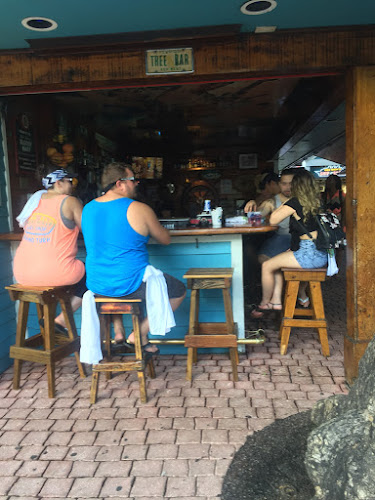 It must have been around ten in the morning by the time I walked past Rick's Tree Bar and there they were, making friends. Rusty and I kept walking, his tail arched up waving like a proud rusty red banner. 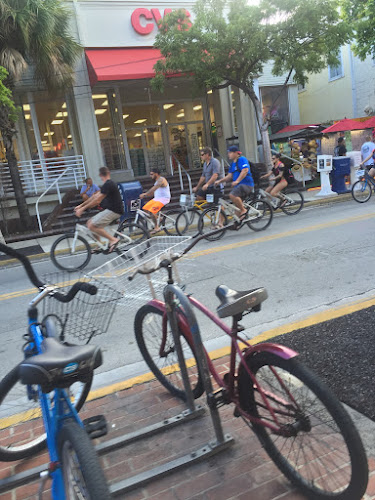 I hear tell as I walk the streets that the best way to get around is by bicycle, yet I remain unconvinced. Bicycles, like it or not, are vehicles and they absorb all your attention, or at least they should. They require some skill too, balance and steering, handling narrow streets and traffic, avoiding getting run over or running a pedestrian over. It's not like walking. 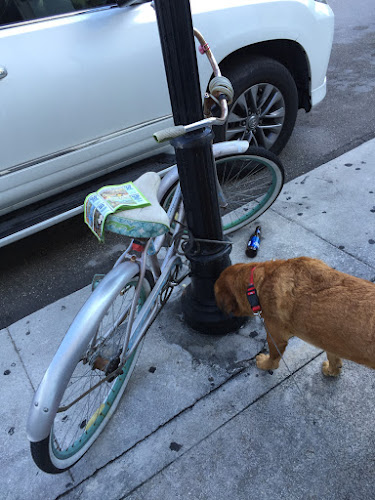 I'd rather ride a scooter and get there, then walk. I suppose I would think that, as I've spent much of my traveling life on two wheels with engines. There again people hurt themselves with scooters so when I got stuck trawling Fleming Street at twelve miles an hour I was able to imagine that any faster and some of the ducklings might have tripped and hurt themselves. The thing was, when they got to the top of Fleming instead of pulling over into the parking lot at Blossom's Grocery they congregated and discussed their next move in the middle of the street. My tolerance for dorks on scooters was exhausted and I pulled round then in the car and went on my way. Decidedly, some people should stick to pedal bikes. 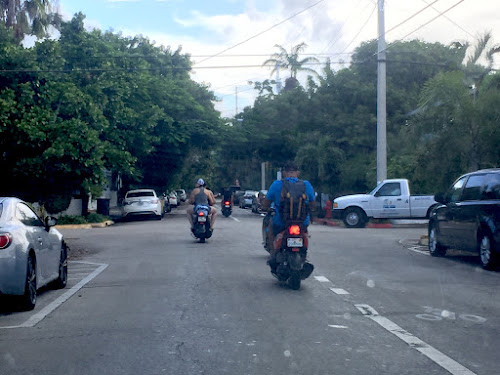 Then I found myself approached by some nice friendly visitors at this intersection (below). I wear pink Crocs partly because they are cheap, no one wants them in size thirteens, and partly I have discovered they discourage people from asking me if I live here (Here? On Duval Street?? Hell no). Anyway this lot must have been so desperate they overlooked my eccentric footwear, and walking a dog I must have appeared to know where I was going. Their question was simple enough: Where's Duval Street, please? Er I said... 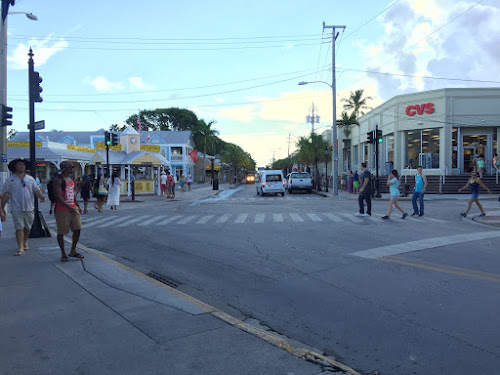 Right there, I told them, and I was ready to make some smart ass remark about the street signs.  Bollocks, there are no signs! How bloody stupid is that?  Here we are at the intersection of Front and Duval and no-one knows.  For the longest time there was no "Welcome to Key West" sign until the Rotary got around to doing what the city should have done for itself.  I guess it's time to see a nice clear sign that says "This is Duval" as apparently some people are missing it. There's a lot of map reading going on downtown. 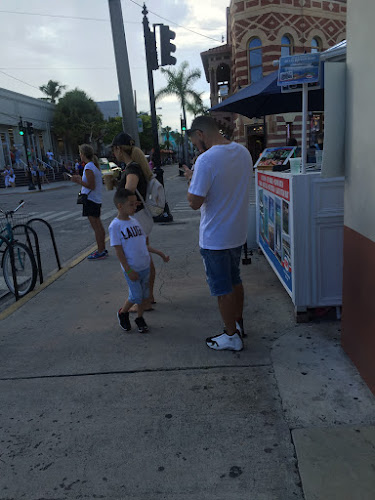 There is a lot of criticism of telephones these days.  I use mine, and you feed off that because here you are. Portable computers are part of our lives and when I'm waiting somewhere, in line at Publix, alongside Rusty while he takes a break or when I'm early to an appointment I pull out my phone. I can read a book, a magazine, take a picture or send a telegram. And I don't need Western Union to send words anymore. Sometimes I organize a blog post on my phone using the BlogTouchPro app. It's laborious getting it to look the way I want but I can do it.  Key West before the Internet was too isolated for me. 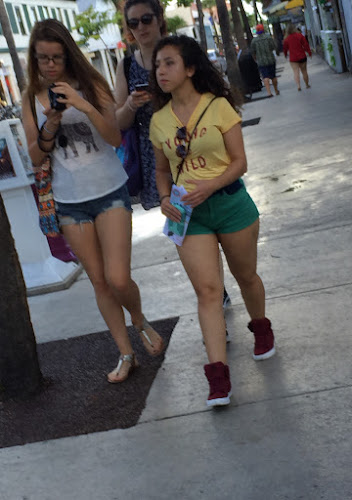 The old CVS is still vacant and the Knight Real Estate sign is still there even though the principal, Ed Knight died a few weeks ago.  He was 99 and much revered. Some day I guess his name will fade from the real estate signs but for now he is remembered. 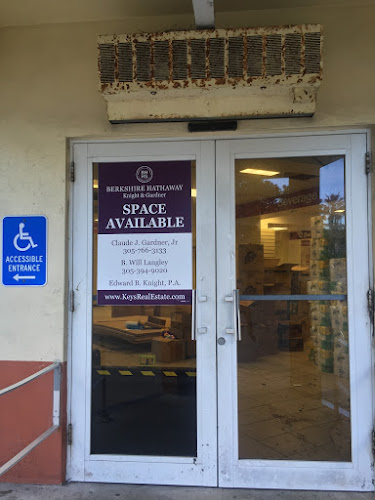 Some day too the old CVS will become something else but for now it's empty as the chain opened a fresh new branch across the street.  I have yet to enjoy that pharmacy as there are plenty  scattered all over the place and I don't need to come down here to see a chain pharmacy. 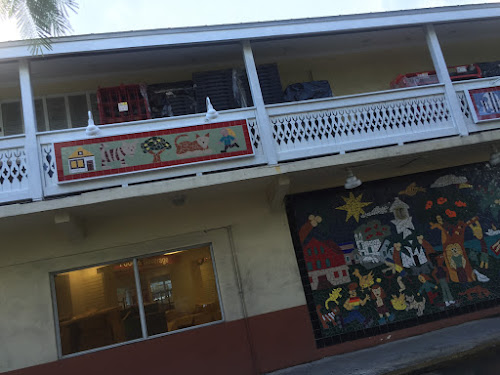 Rusty is an astonishing dog and I can prove this because in the picture below you will see something never before seen and unlikely to be seen again. We got a freebie from one of the perfume stores.  Yup, that's Rusty getting a. Free pet and they didn't even try to sell me anything.  I guess I don't much resemble your average perfume buyer and they were smart enough to notice. But they liked my dog. 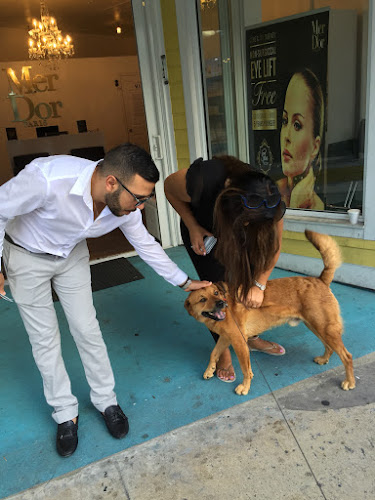 Another thing I've noticed is the peculiar names they give bars downtown. Besides these two ripe ones there's Juan Loces Lucy on Duval right next to the world's smallest bar. I'm just glad Big Uns is gone. Imagine dispatching police to "Big Uns"  night after night.  It got old fast. 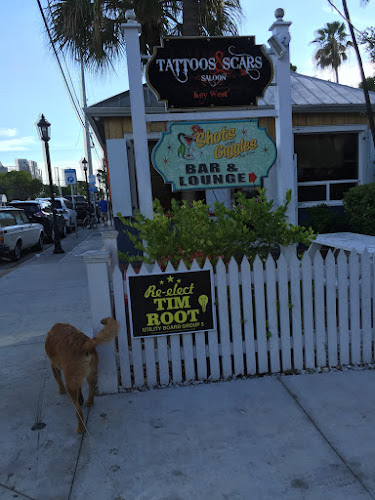 And the supplies keep coming to feed the masses.  Slow season is here more or less, and there are fewer vehicles circulating but it's not dead quiet like it used to be in September.  I find it disheartening how busy Key West is year round, though there are those who say, through the veil of exhaustion that it's better that way than too few visitors. 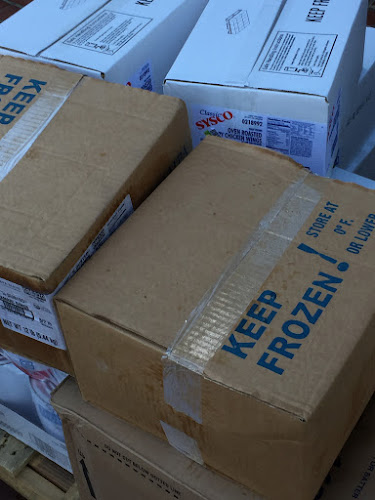 Fantasy Fest is just a few weeks away and the fund raising is in full swing as the King and Queen are selected based on who raises the most money so this is the time they hold events to pass the hat around. It used to be that the party at the end of October was created to fill the tourism void.  However as the void seems to have been filled on its own Fantasy Fest is just a week of extra noise. The photos here will show what I mean. 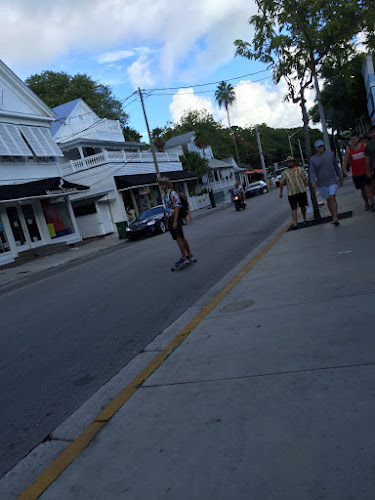 The complaints come and go every year as loud motorcycles show up for the Poker Run and naked people show up for Fanstasy Fest which in my book, if it annoys you that much plan ahead and take a vacation. 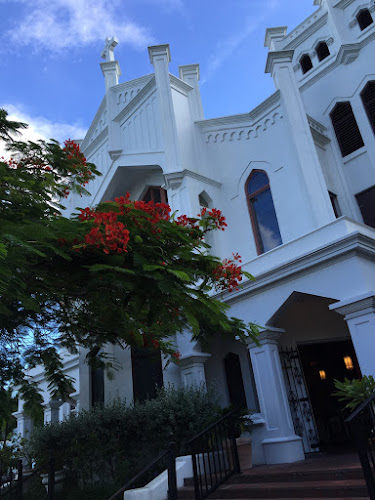 St Paul's, at the corner of Duval and Eaton.  A not terrible spot to watch the Fantasy Fest grand parade by the way.
Posted by Conchscooter at 12:00 AM No comments: Links to this post