Chuck is proud of his youthful demeanor so in his case the "old fart" refers to his motorcycle a 25 year old Sportster, bought for a song, restored, and running perfectly. In my case I am the old fart, while my motorcycle is a much more modern machine than the original Bonneville that might have been built around the time Chuck's 1985 Harley Davidson came off the production line. Chuck notes with pride that his machine is the last of the breed with cast iron cyclinders, a material that is old fashioned and out of date but that has properties that make it useful for internal combustion- heat dissipation and self lubrication. Nowadays we see motorcycles built of exotic unobtanium, cooled with liquids, operated by electrons and impossible to comprehend. To revel in the old is to be, by definition, an old fart. 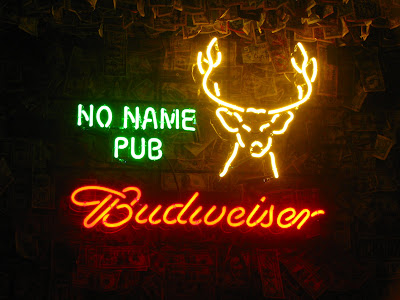 We met at my place last Friday and cruised over to No Name Pub for food and conversation. As one does, and we weren't alone. 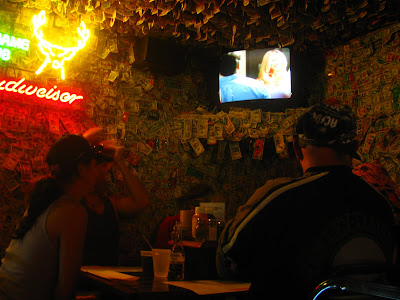 Chuck wanted a slice or three of No Name's famed pizza, so, being men we ordered too much and devoured hot greasy pastry and cheese and crispy slices of salted meat products. We were ashamed of our greed and revelled in it. Chuck made up for it by drinking tap water, I had a Yuengling draft to start and strong iced tea to chase the alcohol away before we ended our long leisurely meal and left behind a picked over plate. 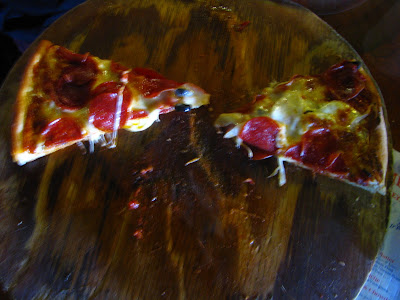 It was going to be one more lovely day in the Lower Keys for the winter visitors bleached by gray skies who were out to enjoy it and work on their tans. 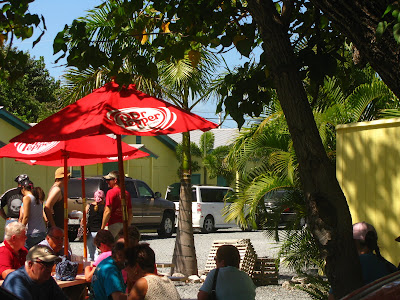 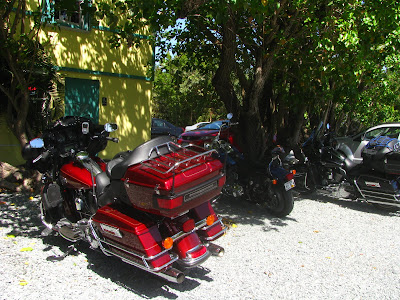 Chuck and I were planning a slightly more modest undertaking on our unsuitably small and simple machines. We were riding to Marathon to buy a motorcycle. 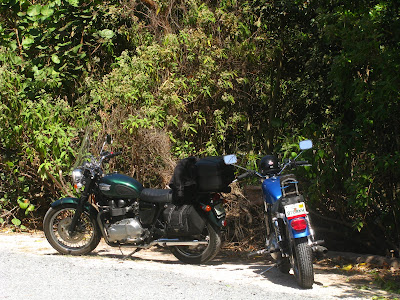 We had a slight problem here as we both like to ride alone and Chuck very decently agreed to take the lead to start and thus set the pace, something I hate to do. I popped my squeezbox out of my jacket pocket and started shooting off pictures as we rolled south on Wilder Road back to Highway One. 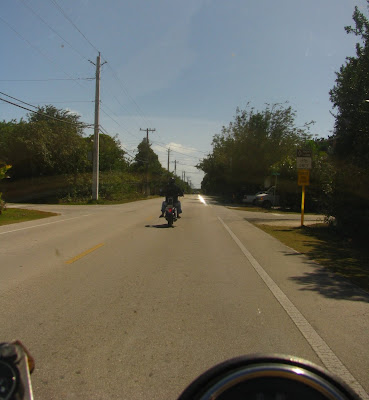 Temperatures were in the low 80's and our motorcycles, though 22 years apart in age are very similar in performance. Chuck has four speeds to my five, neither bike has a tachometer but both get around 42 miles per gallon and cruise happily between 60 and 80 miles per hour. 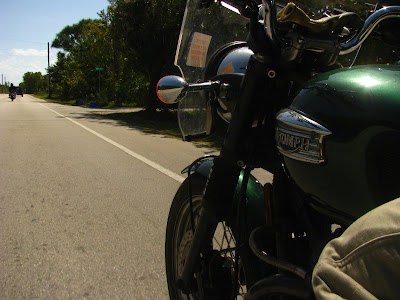 It was a matter of minutes to find ourselves crossing the turquoise waters on a windy afternoon in bright sunshine. 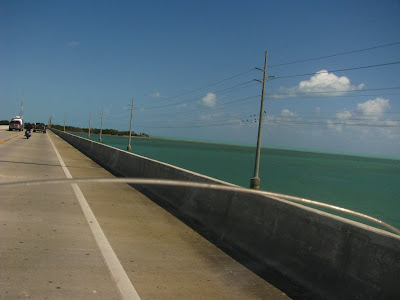 The weather forecast called for crisp sun and strong winds up to thirty miles an hour and conditions delivered. I had written to Chuck wondering he wanted a rain check to postpone till calmer weather. This is the new sensitive me trying to be aware of the fear that imbues many people who ride motorcycles. They seem to live with a fear of wind, which personally doesn't bother me much. Chuck wrote an indignant reply to the effect that anything less than 50 miles per hour isn't worth worrying about. We had 25 gusting 30 so we were in excellent shape. The waters were nicely frothed by the wind. 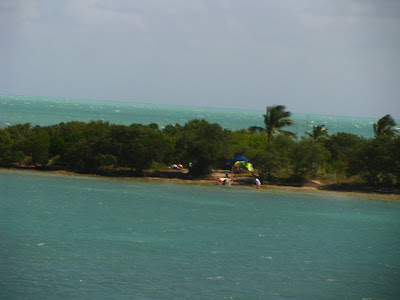 I saw these campers on the spoil island south of the Seven Mile Bridge and figured they were having quite the adventure. We were amusing ourselves quite nicely on the bridges admiring the views...

...avoiding getting blown around... 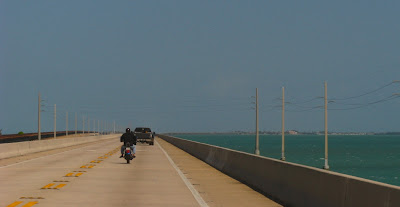 ...blatting along at a steady 60 miles per hour into the headwinds. Chuck has no windshield, which is fine for him. Me? I'm a wuss and enjoy my Parabellum, the top of which can just be seen, here below: 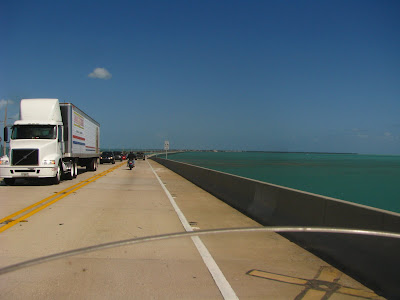 At the start of the weekend one usually sees much heavier traffic heading south and in fact last Friday afternoon we had plenty of oncoming vehicles. 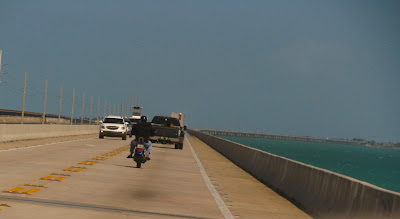 Then we arrived in Marathon, the wide spot in the Overseas Highway with a 45 mile per hour speed limit and two lanes in each direction. 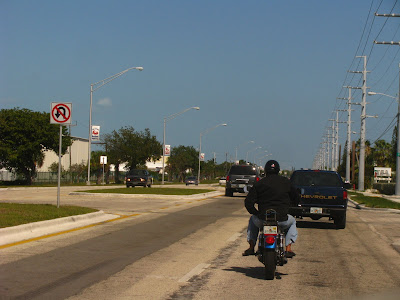 I pulled past Chuck and risking everything twisted in my seat and snapped a picture. He took it in good part making only a small remark about "how many pictures" I took. 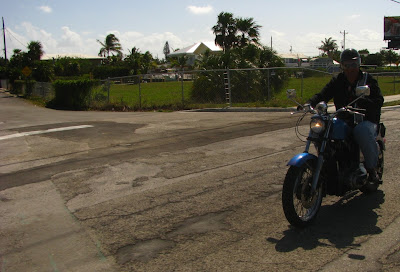 That early Harley has several features I like. The riding position is what is known as standard, not cruiser style with the feet properly under the body, which gives better control over the machine. The Harley is also a very basic motorcycle, chain drive, discs fore and aft and reliable electric starting. However it all comes together nicely with no superflouous body work , no electronics no nothing that detracts or adds to the fundamental pleasure of the ride. Chuck is quick to point out this is his first ever Harley but he really likes it, and I can see why. 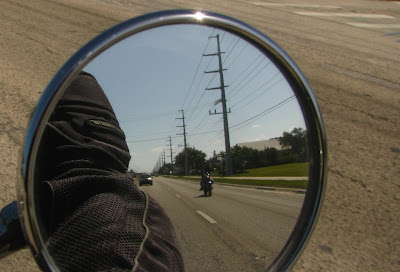 It was a good day on the road. 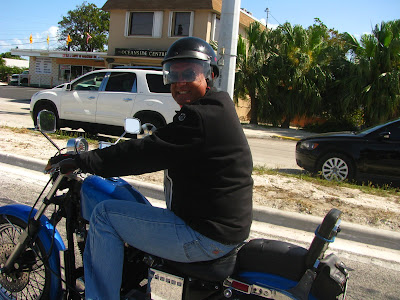 From the sublime we took a turn to a different kind of ride. Chuck had been talking about buying and restoring another machine and as he is an engineer by vocation and inclination he enjoys finding a bargain, usually not running, and then with a little restoration work (or a lot) the bike comes back to life. Chuck enjoys owning and riding it and sells it on for a little more than he spent. Me? I love the idea of doing all that but I am the kind of rider who buys as new as possible, rides the shit out of the machine and sells it (to Chuck? for restoration..!) to buy another and start the cycle again. I'm just delighted with my Bonneville which is riding better and better as the miles roll by and. I'm at 49,000 so far. In Marathon we met the owner of the machine in question- not the 17,000 mile Kawasaki Voyager he wheeled out first. 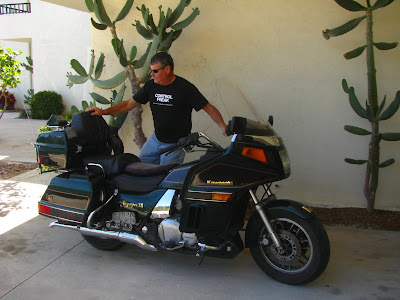 I'd never previously seen air vents on a motorcycle but this thing has them. The owner lamented the bike doesn't have reverse but he bought it when the Suzuki GS1000 he's selling crapped out on him and the Suzuki is a basic motorcycle indeed. It blew a head gasket two weeks after he brought it down from Wisconsin (by trailer) to ride in the Keys. The poor thing has sat neglected for three years in the garage. 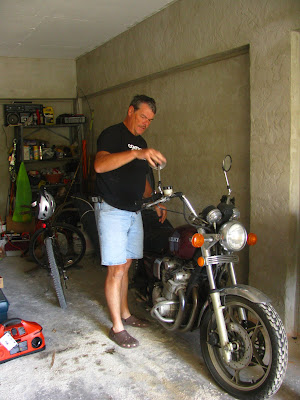 I am not a fan of the cruiser style from the 1980's but the standard GS was a thing of beauty and a ride to be envied with a bullet proof motor and decent chassis and a reputation for reliability second to none. This sad thing was discarded when the owner's mechanic said it wasn't worth repairing, which I think is crazy. Who cares what the bike is worth after spending five hundred bucks to fix it, if it rides properly. I guess the broken gasket was an excuse to get a better (read bigger) bike. The story got odder though. 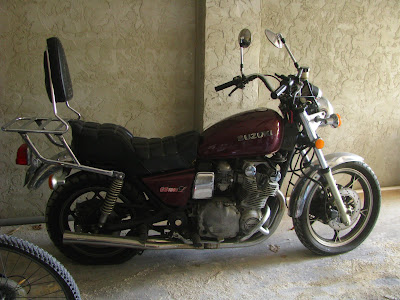 Clearly the bike is doing no one any good stuck in the garage but the value of this lump of forgotten metal is hundreds more to one of the men in the picture below than it is to the other. Chuck was worried about engine damage, the owner was worried about dust and rust so he polished the wreck. 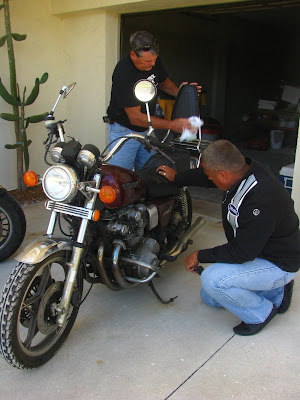 The battery was flat as were the cracked old tires and nothing much could be gleaned from simply looking. Chuck pondered the risk of broken internals while I wondered what it would be like to ride a Voyager with a radio and cruise control and air ducts in the fairing. Then we left, mission accomplished, and the overpriced Suzuki was shuffled back to the inner darkness to remain worth nothing to anyone. We stopped nearby for gas where we received a message from the restoration gods. We came across an elderly Buell and a lovely old Honda 500 Four ridden by one of our contemporaries. They appeared to be a father and son, down from Up North with a stable of motorcycles in Fort Lauderdale, including a Russian Urinal sidecar outfit. The Honda, a barn find was purchased for a mere one hundred dollars, hundreds less than the asking price of the GS1000 we had just looked at and I think that announcement sealed the fate of the distressed Suzuki. 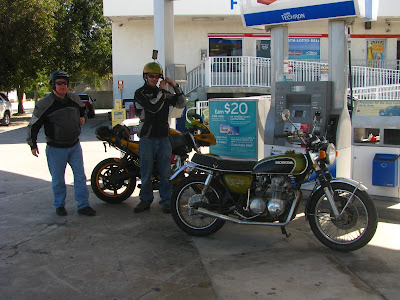 As we talked across the gas station pumps the son, if that is what he was, put his helmet on and I was fascinated, like a parakeet with a mirror, by the camera bolted on his head. I am sure my eyes followed it back and forth as he talked. I could only bring myself to photograph the accessory as he rode away, thinking it rude to point and click in his face. I guess it's better than my method of holding my camera in my hand but it sure looked more unusual than a pair of pink Crocs, for example. 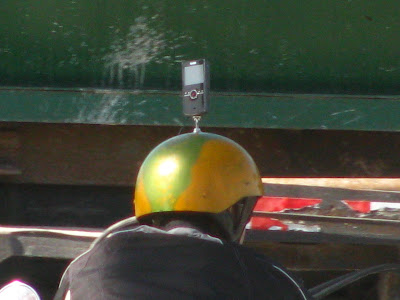 We put some almost-four-dollar-a-gallon gas in our tanks, and prepared to ride home. "The good bit" as Chuck put it, down wind pushed by the still honking south east breeze. He had fifty miles to go to get home I had about half that. On the other hand I had to get to work at 6pm... 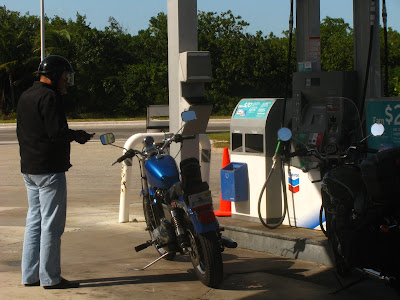 The road was of course lovely as we went back the way we came over the Seven Mile Bridge. 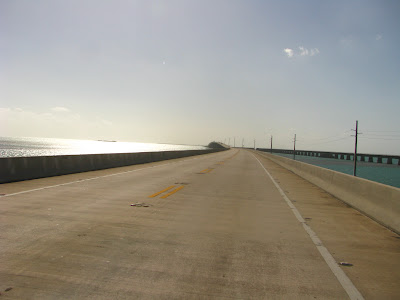 Still sunny, still windy and this time with me in the lead setting the pace. We got on the Seven Mile Bridge and I opened it up to pass a dawdling car. I startled Chuck for a minute but he was game and we passed a few more before settling into an empty stretch of road. The view as always is a mixture of little lumps of land, turquoise waters, and every now and again a familiar human made landmark. Like the old Bahia Honda Bridge. 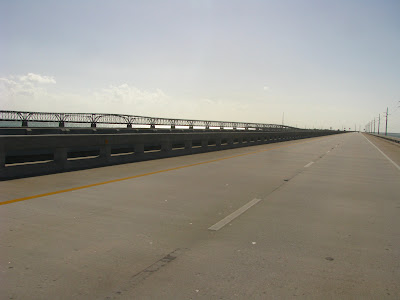 And approaching Big Pine Key once more the cormorants were as usual making themselves comfortable on the old bridge between Big Pine and West Summerland Keys. 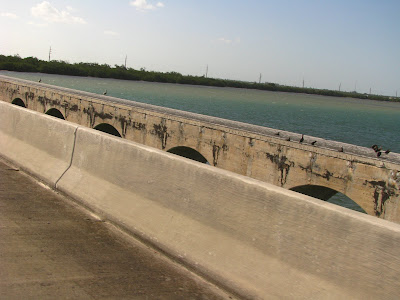 We parted ways in Big Pine as I had a chore to do, to check on the availability of tires for my car, which was of no interest to Chuck so he went off after promising to do this again some time. While I was talking to Donnie at Monroe Tire I noticed this elderly Yamaha in the perfect position to attract Chuck... just as well he didn't follow me over there. 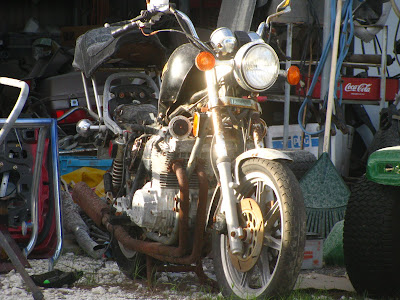 Later Chuck sent me some pictures of the machines we had talked about at lunch. Including a photo of his old Moto Guzzi Eldorado a motorcycle I have long lusted after and was seriously envious that he had owned one. I couldn't download his picture for some reason so I got this one from the Internet. It looks lovely to me. 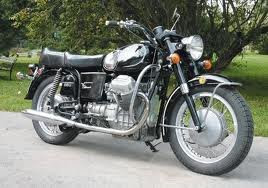 Of course I'd like mine not only running but restored and ready for use as a hardcore daily rider. And Chuck to keep it running for me. I ride when it's windy or rainy but I am a wuss when it comes to wrenching.
Posted by Conchscooter at 12:01 AM 9 comments: Links to this post