After two consecutive days stopping off at the Hawk Missile site, that reic of the Cuban crisis, Rusty decided he had had enough. He likes variety does my dog and I lost my opportunity to sit in my Kermit Chair and read. At first he ran back and forth sniffing everything but like a clockwork toy he wound down and soon on the second day earlier this week he needed me to trail him around, like a child involving a parent in make believe exploration. Luckily I had my camera. 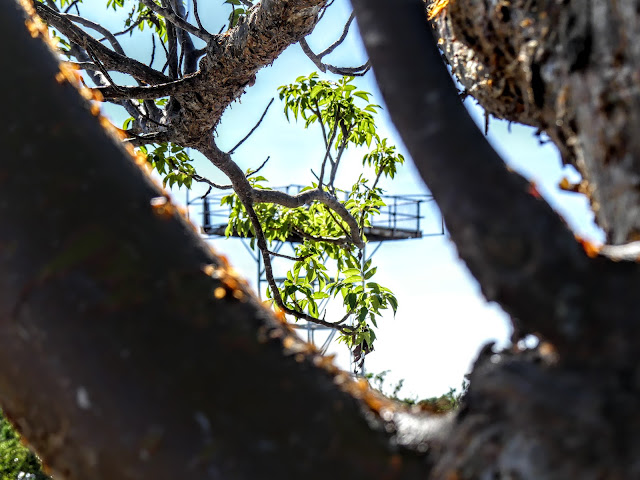 By the calendar we are running towards the end of the year, though for the year ends with my birthday on the last day of October when I usually take a reckoning  and before I got married I figured if I wasn't broke I was doing all right. Nowadays my birthday marks the end of my work year as my retirement date is now November 1st (2021 so I have  a ways to go). My desire to store memories of the Keys against the last years of my life revolves more around views of the places that matter to me rather than places that are celebrated by the culture created by Key West the drinking town. 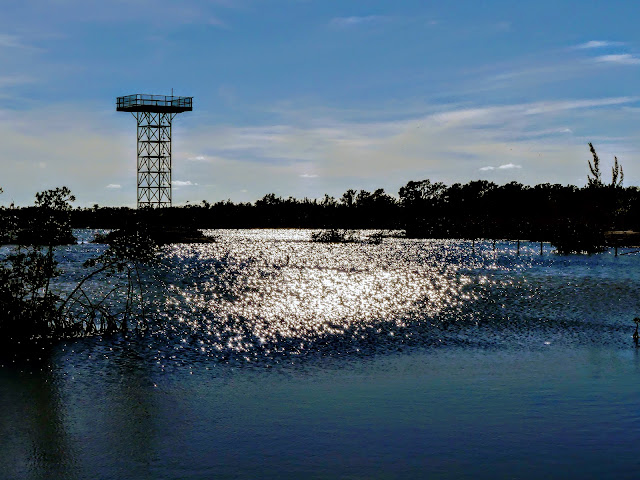 The newspaper was reporting this week that the city commission has plans to spend millions of dollars here over the next few years creating playing fields where now there is a little rusty history and some hurricane-proof bushes. It is right and proper no doubt to create order and organization where there is none but I am  not yet over the loss of the wilderness that was Truman Waterfront before the news comes out that Little Hamaca is to be organized. 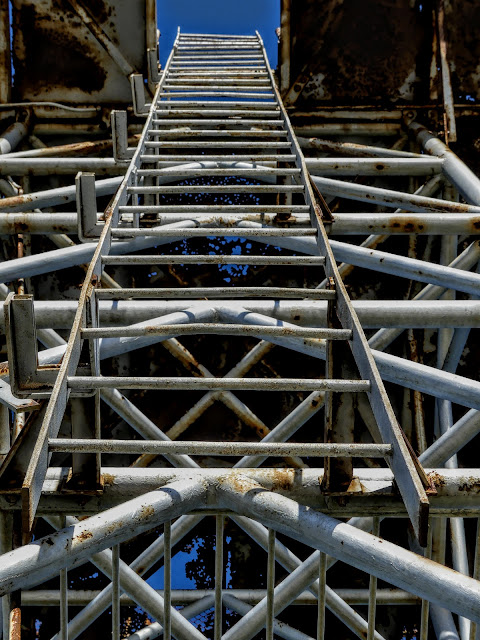 It is a place of storage and I was delighted to see Christmas ornaments unaccountably stuffed away on top of a storage container. A vast green pile of them. Five million dollars will buy vast spacious fields for the youth of the city. Three million, the more likely sum will bring in more restrained playing areas but the nature of the place will be transformed. 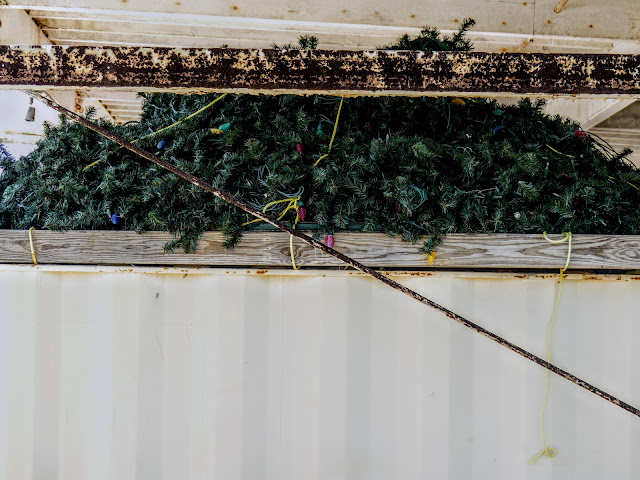 One thing I miss about life in the Keys (not snow) is the absence of the third perspective. It does get confining sometimes to live on land barely five feet tall at the highest point. So when Rusty ordered me out of my chair I climbed the the foot berm which was built to protect the missile launches from neighboring explosions. From up there one can see across the mangroves, almost like a valley from a mountain, only in this case Riviera Canal is visible in the distance. 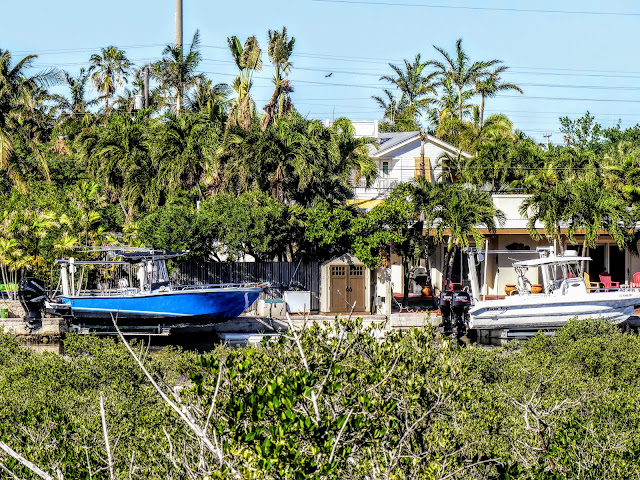 Wandering around I found a hole in a street sign, possibly placed there by an errant bullet, such is the wild wilderness of this place and I turned it into a camera obscura for my camera digital. I was having lunch with a friend last Monday and we talked of Hurricane Irma for a bit. We reminisced about Georges in 1998 when his trailer was torn up. There was nothing else to do he said of the aftermath of the storm that tore up Stock Island and Big Coppitt, so we loaded a few boats and went camping on the beach at Boca Grande. That's a beach ten miles west of Key West, on the route to the Dry Tortugas for small draft boats. It seemed funny that, going camping after a hurricane before cleaning up or sitting around lamenting. Those were different days he said and I have to say we looked a bit glum thinking about the way things change. We are hurtling through change in the Keys right now and one wouldn't mind a little bit of a slow down. 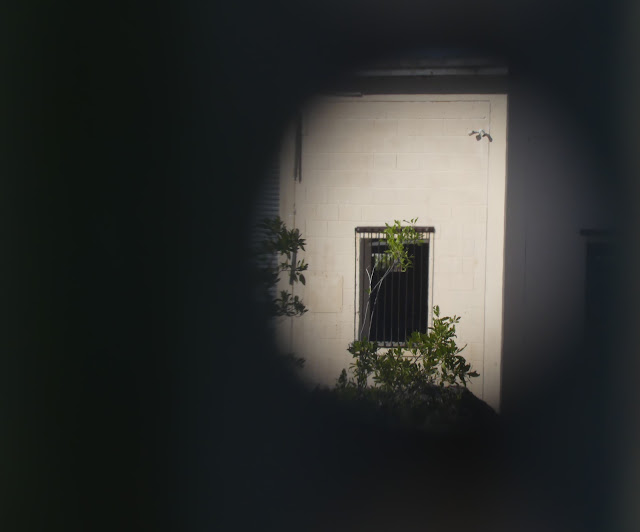 Below I took a picture of the temporary air traffic control tower that has replaced the regular tower across the airport. It all seems rather elaborate for a temporary facility but it seems a bit unlikely a ground level tower in a  trailer can  replace a tower that looks like a tower at an airport. 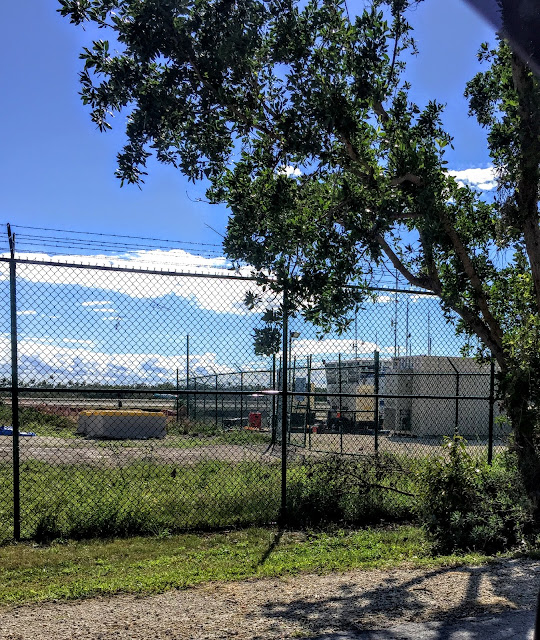 Hurricane Irma sure did do a number on us.
Posted by Conchscooter at 12:00 AM No comments: Links to this post