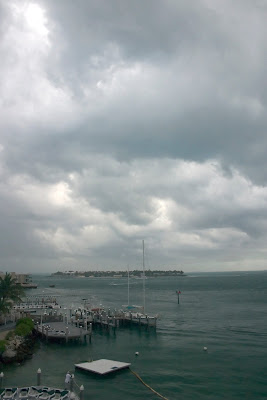 Key West Harbor from the Galleon Resort by GarytheTourist.
Posted by Conchscooter at 4:01 PM 2 comments: Links to this post

Our trip to the Tuscan island of Giglio (Lily) was an adventure but I did not have the nerve to take the ST1200 on the dirt at the end of the paved road but we did ride the paved road the five miles as far as that went.

The views were spectacular.

And the drop offs were enough to cause my wife riding pillion, palpitations.

But I am getting ahead of myself. As usual.

We crashed in bed exhausted after our 12 hour 250 mile marathon circling the Gran Sasso in Abruzzi. The next morning we got up, put our fly specked jackets back on and made tracks due west to the coast. It was a fast ride through some lovely countryside but because we had a ferry to catch we were riding for time with no pauses for pictures. Imagine rolling hills, yellow fields of wheat, already harvested, and hedgerows along a winding two lane road. The motorcycles were a BMW R 1200 RT which Giovanni rides and my wife rode pillion while I was onthe R 1200 ST sport tourer I've rented- and I'm enjoying it thoroughly!

Giovanni is always checking his phone when we stop for coffee and the messages always pile up from his cardiology practice while we are on the road. Finally we made it to Porto Santo Stefano on the Tuscan coast with 15 minutes to spare for the eleven o'clock ferry. The tickets were shockingly pricey, 76 Euros for two people and a motorcycle, about $110.

The ferry left on time and we had the cheap thrill of riding the ramp and getting our bikes tied down, which is actually always a break from the routine of riding and thus interesting.

Though the dogs I saw had no muzzles on them...the view from the deck was lovely.

And soon we were underway for the ten mile crossing at slow speed- it takes an hour!

The island is a stones throw away and we watched the treeless rocky shores quickly come clear through the haze. Giglio has always been a backwater with three small villages, a few miles of road and not much else. There is one swimming beach on the six mile long island and the rest is scrub and rock.

Giovanni planned to split and spend the afternoon on the sand beach at Giglio Campese on the west side while we were going exploring. First lunch then Giglio Castello, the 12th century fortified village at the top of the hill. 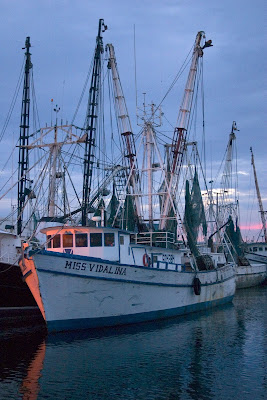 Shrimp boats like this one at Stock Island used to dock at the Key West Bight but they got moved out by gentrification. Photo by GarytheTourist.
Posted by Conchscooter at 8:01 AM 2 comments: Links to this post

"What? Eat on the freeway?" my wife thought I was crazy when I first suggested such a thing. Not anymore.

It isn't necessarily gourmet eating but I don't shy away from the idea of stopping at the freeway rest stops for a not too bad at all meal in Italy. It's cafeteria style so even if you can't speak Italian you can fall back on the time honored point and shoot system.

The Autogrills are usually built across the lanes of traffic and serve everyone coming and going with salad bars, pasta stations and "secondi" which means main dishes and you can mix and match as you choose.She chose salad, I had pasta with eggplant and tomatoes.

You get china to eat off and proper metal cutlery, you can drink wine or beer and they offer fruit and dessert as you would expect from a nation that likes to eat properly. To go boxes and eating in your car are not concepts that have yet penetrated the Italian psyche.

It actually forces you to take a pleasant break from the drive, sitting upstairs above the traffic zooming down below.

These things have been around for decades and in my youth when I was a whiny back seat passenger my harassed mother driving us home for the summer holidays from our English boarding schools would get her own break by stopping at the Autogrill, though just like today she had to walk through the convenience store below with all it's gaudy plastic temptations to get to the food upstairs. These days too public smoking is mercifully banned in Italy.

Posted by Conchscooter at 3:55 AM 2 comments: Links to this post 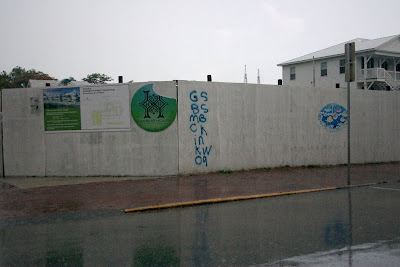 This wooden wall has gone now, but it was put up by the developers of the old Jabours Trailer Park, and the public was invited to decorate it. The cryptic marks above showed the passing of GarytheTourist's family this way, just as these pictures are proof of Gary and I crossing paths in Key West when he left me these pictures to use while I'm away in Italy on vacation.
Posted by Conchscooter at 12:01 AM No comments: Links to this post