Rusty A Year On 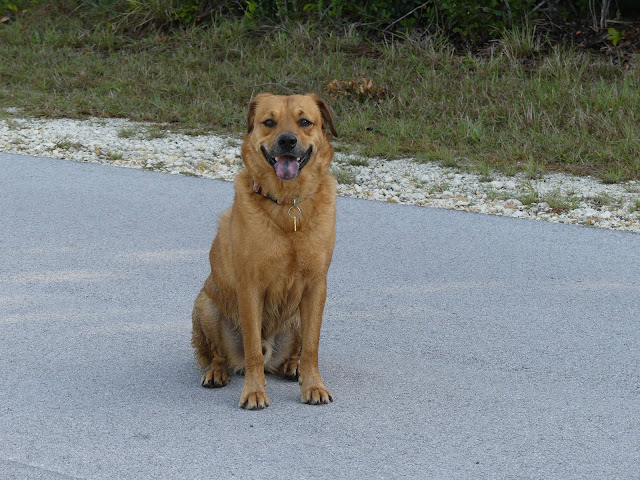 Facebook reminded me I got Rusty last February 20th and in an amazingly short time, eight days after Cheyenne died. 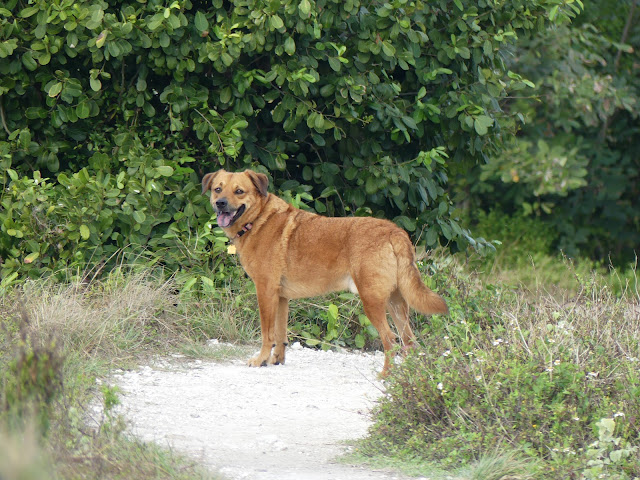 Rusty is completely different from Cheyenne and cannot really be compared. She came from a home, not a very nice one but she was never a stray and she lived out her life with me in a form of retirement, as is proper. She always seemed to keep me at arm's length even though in the critical moments of her life she always sought me out. Public displays of affection annoyed her. 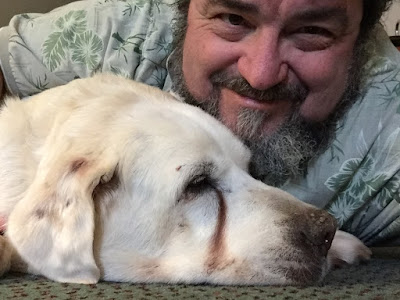 Rusty is young energetic and curious. He is intelligent in ways I have rarely seen in a dog. I enjoy his company immensely. 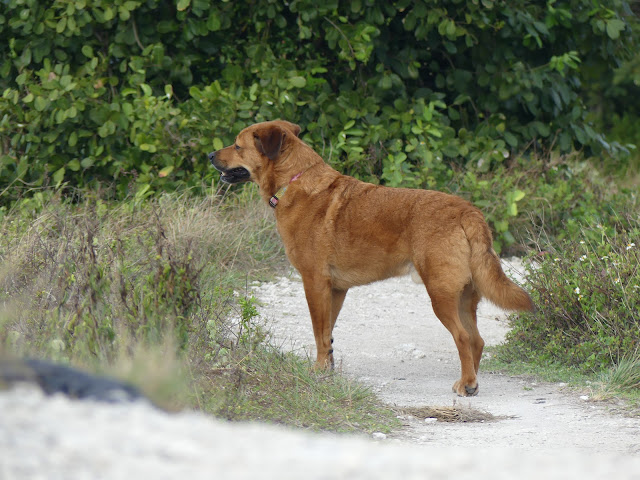 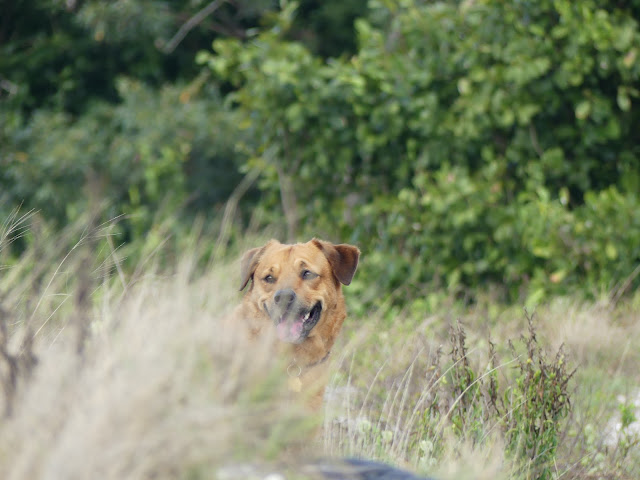 He hates to be photographed so I snatch a long distance telephoto picture when I can. 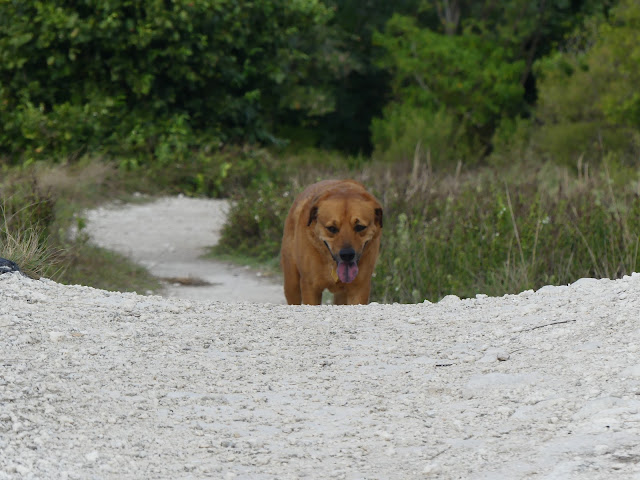 He has a lot of the predator in his genetic make up. 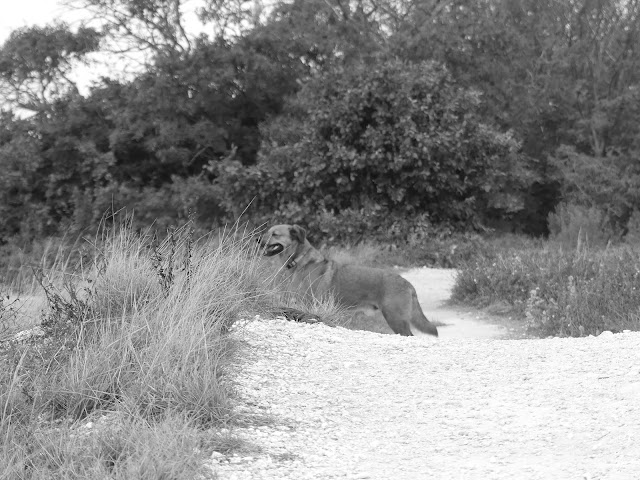 He is amazing at moving through the convoluted mangrove woods hereabouts.  He pops off the trail and circles around  appearing silently in front of me once again. 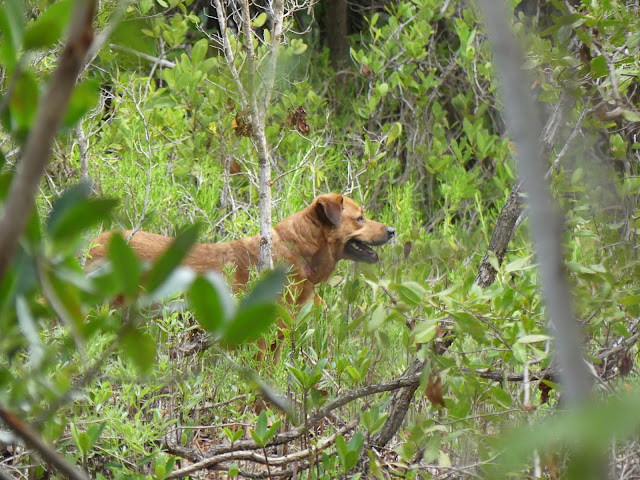 The warped and twisted trunks and roots of the mangroves are no obstacle to him. 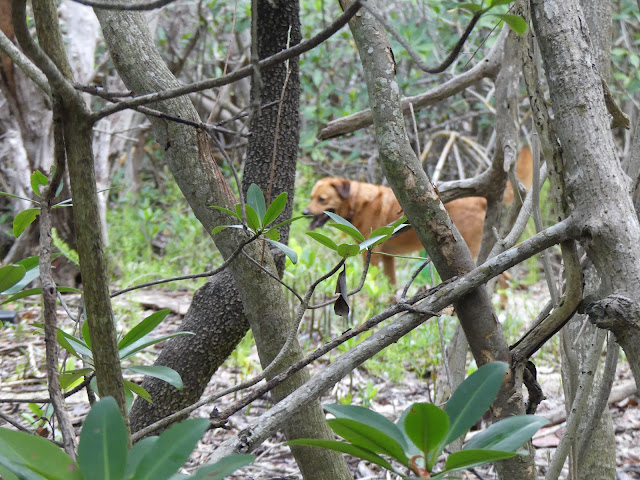 The south Florida heat doesn't bother him much at all though I am quick to whip out the water bowl which he usually ignores. 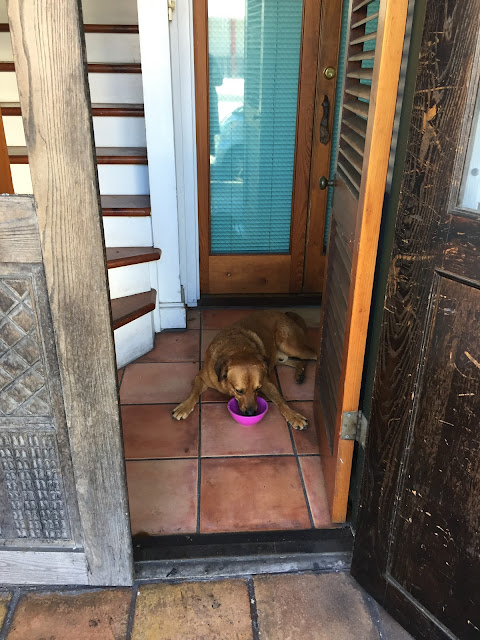 He is an independent little dog, and puts up with the leash because I say so, though he could bite through it in two seconds. He did that once to come to my rescue when he thought my trainer was attacking me while we were working out together. Sean thinks he is very cool. 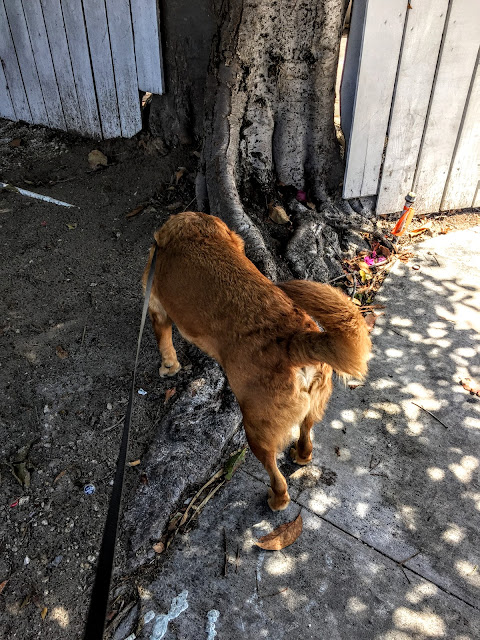 He loves being out in the woods and every morning we spend an hour or two on the trails checking stuff out before the world is awake. It's the best way to calm down after a night at work. 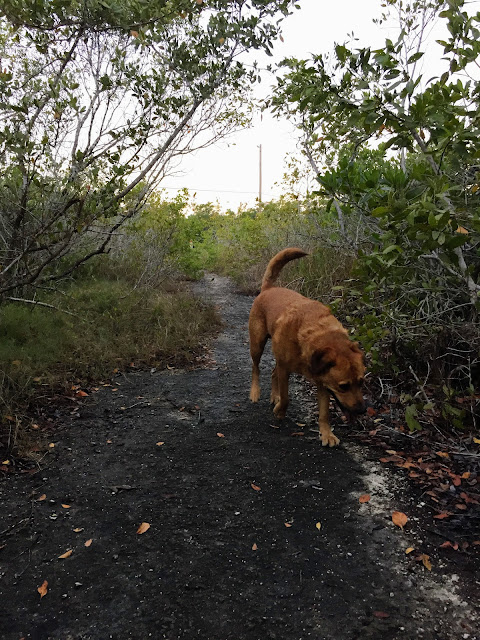 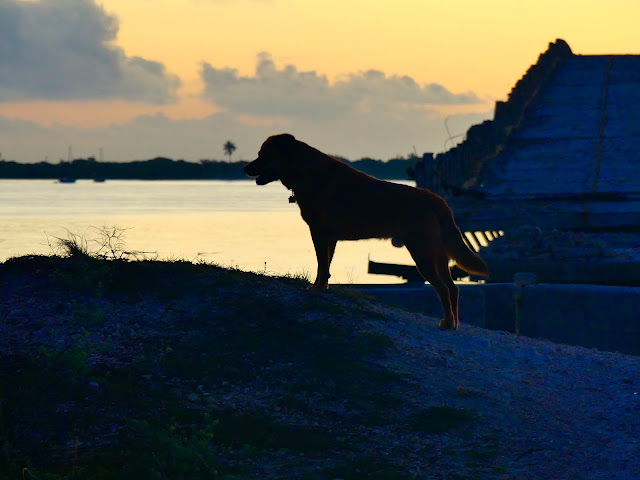 He is learning to be friendly with large dogs he meets and his confidence in the last year has grown by leaps and bounds. 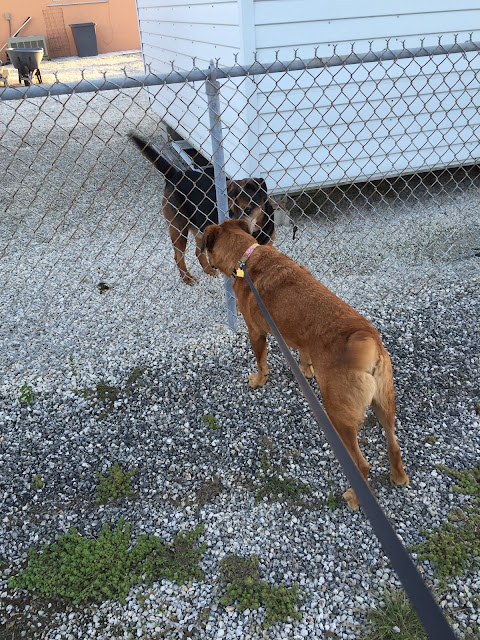 When people see him trotting confidently about they leap to the conclusion that he is a stray which of course he isn't; he just gets there faster than me. 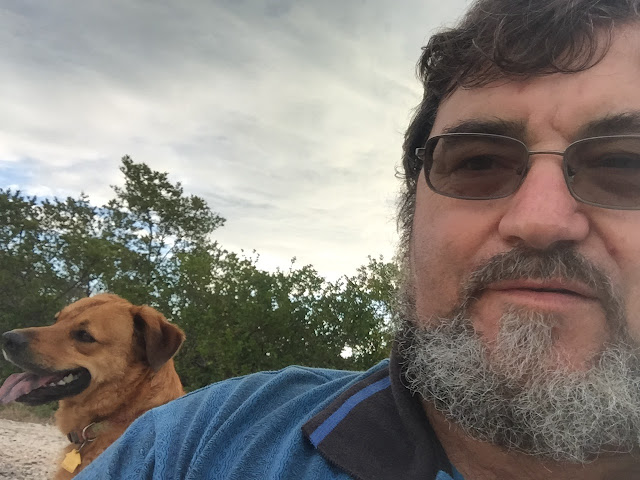 He has the run of the house and there is no fence outside so when he pops out through his dog door he is free to leave any time. He hasn't run off so far. I like to think he is happy at home with me. 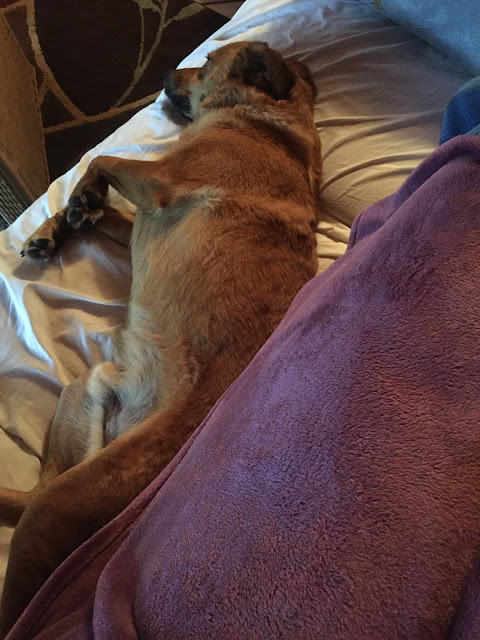 He has been great fun to get to know and these days I am encouraging him to stick close to me around the house, teaching him to enjoy being touched and petted. At first I thought he didn't want to be touched but I have discovered he just didn't know it was allowed so now he is always choosing to lay down next to me and flop on his back to indicate a need for a tummy rub. I am putty in his hands. 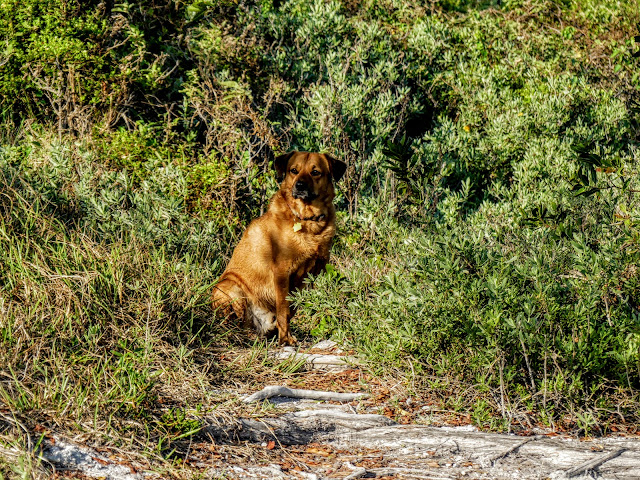 He is at home anywhere. 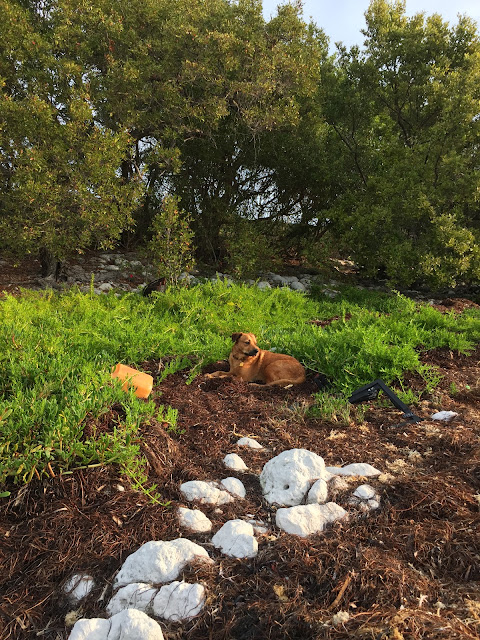 He is not much driven by food but he did find a chew on the road and he played with it for a while. I don't fuss too much about found food, I figure he knows what he likes and I don't want to put my hand there anyway. 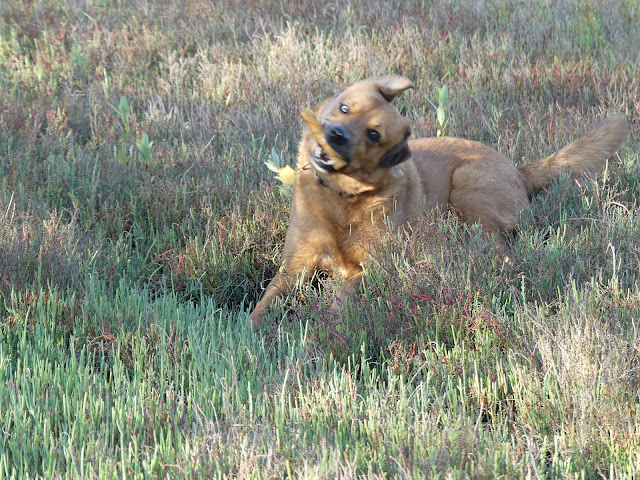 I look forward to many great years ahead. 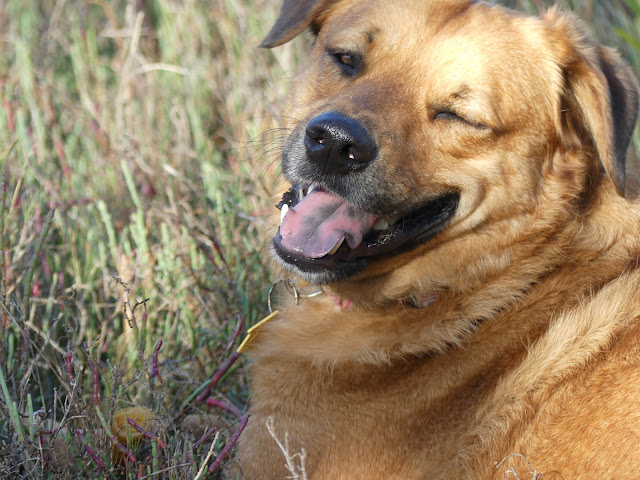 And no, Cheyenne is not forgotten. 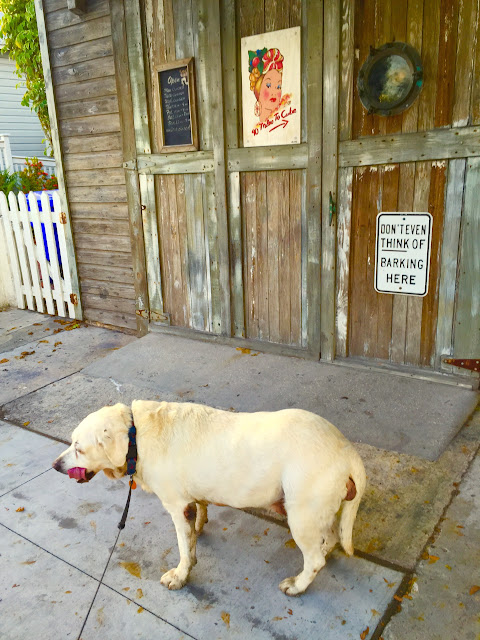 Good girl, suffering the heat.
Posted by Conchscooter at 12:00 AM 3 comments: