It looked pretty enough even on an overcast day at Boca Chica Beach. 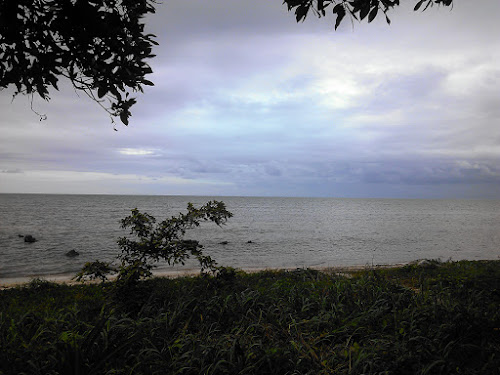 I had some time in hand so I pulled out the traveling folding chair I keep in the trunk, along with a magazine which I carry to read while I walk Cheyenne, and I settled in for twenty minutes all to myself. 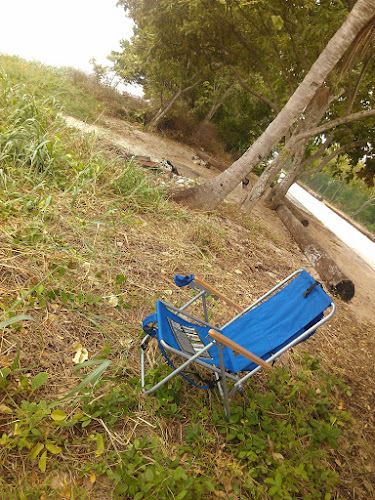 It was not to be. The sand fleas were ferocious beyond all measure so five minutes after my arrival I was gone, scratching my extremities with fervor and passion as I drove. 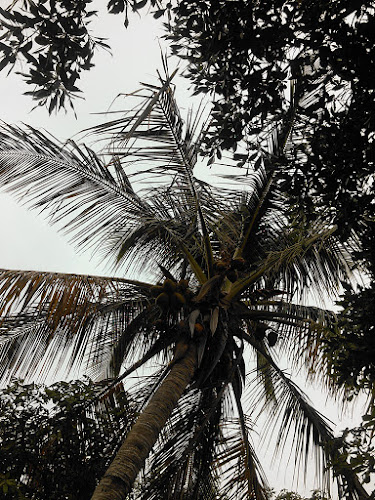 Miserable bloody place. Trust me to forget the repellent.

"You see a lot more when you walk, " my wife remarked recently as we strolled to the Tropic Cinema through Old Town. I started this blog in June 2007 because I wanted a reason to explore the Keys. I lived in Santa Cruz California for almost twenty years on and off and I have never felt satisfied that I explored the Golden State properly in those years. I spent a great deal of time learning to sail and trying to learn to enjoy a bond with the Pacific Ocean, a bond that never formed properly. I look back and wonder if I would have done better to devote those years to land based exploration of California. 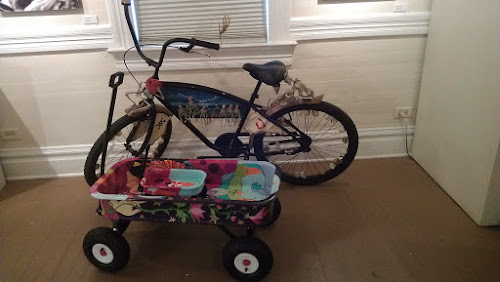 Thus it is that I have made it my mission to explore every corner of Florida and I would say I've done reasonably well so far with more to go. In summer I have taken it upon myself to ride my Bonneville to the Appalachian Mountains a brief week at a time because I want to ride challenging roads and I like exploring the southeastern United States. I have long desired to make a road trip through New England, an area unknown to me and who knows, perhaps 2013 will be the year. I hold out no hope that absurd Mayan related "prophecies" will come true. I expect we will, most of us, still be here next year, poorer most of us, but still toiling away and hoping for better times in the face of forces beyond our control: climate change, a recessionary economy, peak oil and global corporate policies busy removing jobs, etc... 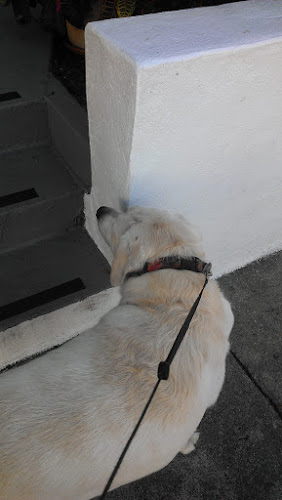 I look to my dog. She shows me the way seeking out simple pleasures. When I started this blog I did it out of disgust at the combative and uninformed nature of motorcycle fora I found on the Internet. I wanted a page all my own where I had to justify nothing and defend myself to no one and where I could say what I wished. There are of course certain subjects I cannot touch upon much. Work is off limits, and small town politics restrict me to glancing away on those occasions when I see the abuses within the power structure. But outside those mild limitations I have a page that gives me a chance to get out and really look at what I see. Noticing is the name of the game. Seeing is just the first step. 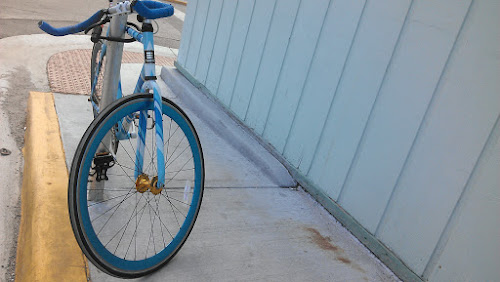 There is so much to see and notice in Key West. I expect there's as much to notice in other towns as well, though Key West enjoys a particular picturesque reputation that makes photogrhy a daily challenge. I find myself walking the same streets, there are only so many, and looking for a new view. A blue bicycle on a blue wall? Grist to my mill! Even a heap of gray trash bags assumes its own color scheme in a city of light and vegetation and primary colors. 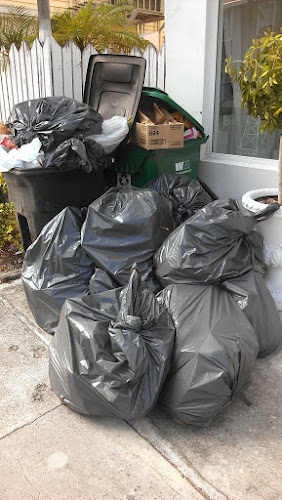 It is also a reminder that life in old town is cramped. A change of residence produces a pile of stuff that can go nowhere. Parking it all on the sidewalk is how you cope in a small cramped town on a small speck of land. It is very 19th century sometimes, life in Old Town Key West city of public middens. And looking at the next picture we see a tree on Fleming near Simonton Streets, a tree where the parasite wouldn't look out of place in the darkest darkest jungles of our fervent imaginations. But this isn't a fearsome nightmare jungle, it's an American street with an American street sign. It's the exotic made safe. 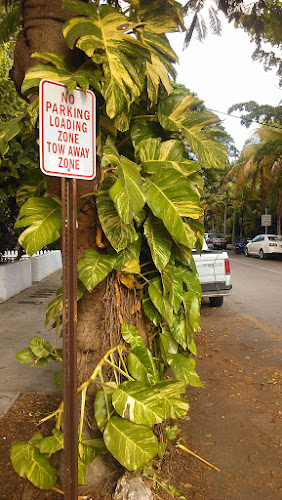 I walk around and try to see what I can and notice what else I can as I go. When my wife and I landed in Key West on our sailboat, at my insistence, where my friends also lived on boats we expected to find the northernmost outpost of a Carribean circuit of cultural adventurers pausing like us to make money and re-establish our cultural bearings after months away in alien worlds. Instead we found the southernmost stopping place for travelers escaping the North but afraid to jump off and sail across the horizon to places and cultures not known. If you want the exotic but fear Montezuma's Revenge you stop in Key West and satisfy yourself you have traveled off the face of the known world. 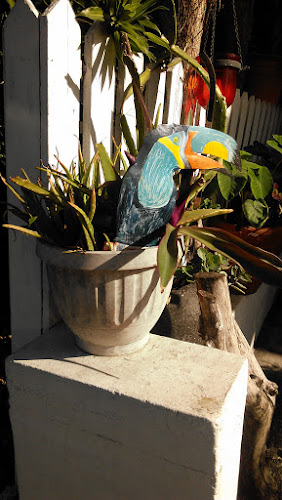 I resisted Key West as a permanent stop for several years but my wife's arthritic health improved and gloomy cold and damp Coastal California seemed an absurd trial for her to suffer. We found Key West makes space for outcasts and slowly I found I liked my liberation from the rigid conformity of life in California. Here I am a Radical leftist, in the People's Republic of Santa Cruz I never quite measured up to mainstream leftist ideals. I liked being in the middle for a change. I liked the lack of seriousness allied with seriousness of purpose. Fantasy Fest has become a pain in the ass but I try not to forget that the stupidity and public clowning is actually raising worthwhile monies. I'd rather raise taxes to help those in need but that position remains outside the mainstream, perhaps forever as we move toward a world where community will count for more than individual wealth. By that standard Key West is golden. 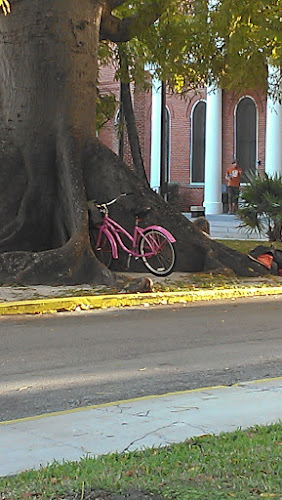 And Key West is also pink, the pink of non conformity. The city has lost a great many natural eccentrics as gentrification spreads insidiously through town and the forced eccentrics seeking public adulation don't make up for their loss. Plans to clean up Caroline Street include sidewalks, flower beds and a bicycle path, all of which has the merchants up in arms as greenery and distant parking make them fearful the customers will abandon them. Fear of change riddles Key West. The pedestrian plan for a couple of blocks on Duval for summer summer weekend evenings freaked out the merchants nearby so much the plan was shelved. The argument was the pedestrian zone might work so well neighboring stores might lose business. Note it wasn't government that blocked a potential successful plan, it was the much lauded private sector. Fearful and small minded. 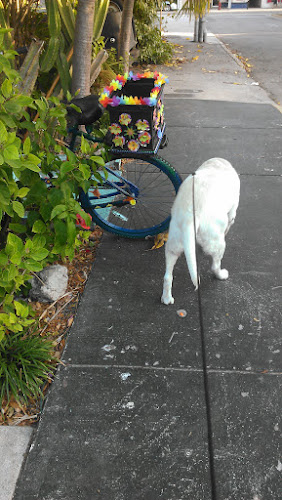 My wife thought I was crazy when I suggested we take coconuts as gifts to friends and family in Italy. I knew my farming rather in law would be fascinated and I was right. My best buddy's wife took her green coconut for a walk through the streets of the provincial town in which they live. It was a source of immense satisfaction to her when her least best friend came across us as we strolled and recognized the Key West coconut by comparison with the fruit she had last seen in the Maldives on an expensive and exotic vacation in the Indian Ocean. "Take that!" my best buddy's wife seemed to say, "my friend lives where coconuts grow!" My banana trees have yet to produce fruit but I hold out hope. Soon I tell myself as I walk past abundant bunches on the streets of this American City. 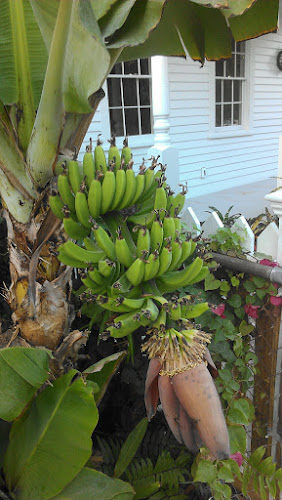 When I walk I look up and I look down and watch my dog with her nose in the dirt. She wage her tail when she finds abandoned food, or food parts, I wonder when I see things like these weirdo tires that appeared around town for a while. I don't do Facebook but I am to,d there was a Facebook page devoted to these things. There was a newspaper article on them too, but it has all faded away, the fuss and the images. A few remain, like so many businesses and Important People who appear in Key West, they come and then they go after they make a small and temporary splash in this tropical puddle. 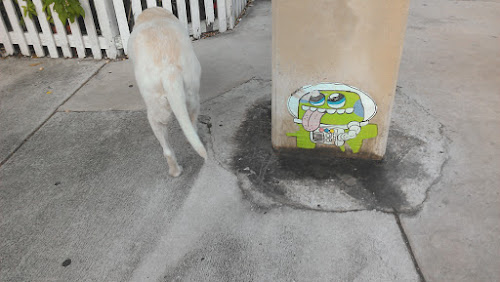 A few years ago I was on a lane, dog free at the time and taking pictures of details observed when a suspicious woman popped out and asked what I was doing. Taking pictures I said, no tourists come here she said, I'm not a tourist I said, but I've never seen you at any local events she said, I shrugged. I guess I have a delicate liver for I cannot keep up. When I did a story about a night out a local strip club, an unusual event for me, I got all sorts of negative tart comments. As though that side if Key West doesn't exist. And I guess that was another goal of mine five and a half years ago,which was to take pictures and portray my home town as I found it. When I surf the web I like to find gems describing other people's towns as they find them. And yet web pages like that are so rare as to be non existent. Why? That I cannot say with certainty but I can say that Key West is a town of interest to people far and wide beyond the politics of a small town, beyond glitzy images of palms and sunsets and sailboats that so often portray the Southernmost City. 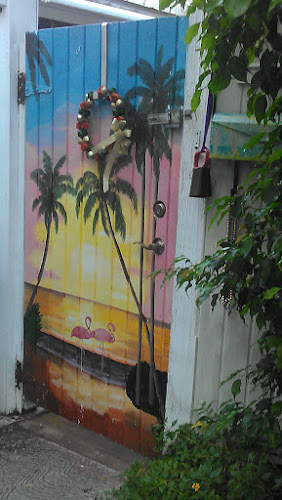 I see the good bits and the stereotypes and the saccharine maudlin images too and I include them here sometimes. But I also see and notice the bums, the trash, the indifference and the crassness of a small tourist town thrust to prominence by happy accidents of location and weather combined with a shot at offering broken people everywhere a refuge without too much judgement. See, observe but don't judge; a tall order for any human being! I shall keep trying, from the periphery of a society absorbed with self absorption.