Johnny Coley And The South

They say that life happens while you are making plans, and I suppose one could be surprised that my wife is still in touch with several people who first met her when she was between attending various universities, until California re-claimed her. However unlike myself who misplaces life with apparent ease my wife has learned the fine art of hanging on and Johnny Coley is just one of several people she met when she lived in Birmingham, Alabama with her sister in the distant past. 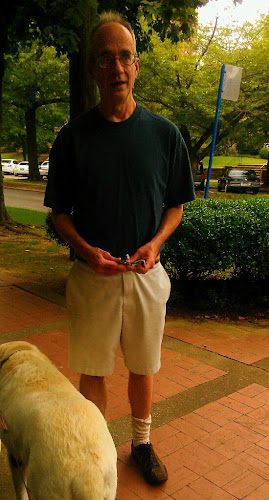 I asked my wife when exactly she met Johnny and she honestly can't remember. He has been there, always and never, known and unknown in our married lives. Twenty years ago we married in California Nd lived here too. I brought us East with my incessant need to measure myself against he sea. We had a good life near whe my wife grew up in Palo Alto famous for the University of Stanford where my wife's parents worked and where she grew up. After we sailed to Key West our new life opened old doors and those who had been hidden away by time and distance reappeared as if by magic. Johnny Coley, a ghost became real. 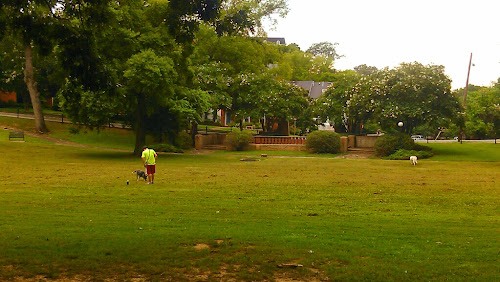 The South for me at the time was a place of stereotype and movies and thus a mysterious destination. I saw it in passing in 1981 as I rode my Vespa to and from Key West. I admire the ability of The South, that mysterious and I'll defined geographical entity to hold America at bay. The South is a place hat has history, that revels in it, it's a place of culture and aggravation and clashes of cultures and a habit of spitting on people who try to define it. And yet those bards eventually become objects of veneration and pride. Perhaps no one reads Tennessee Williams or William Faulkner but who dares to admit they ignore them? 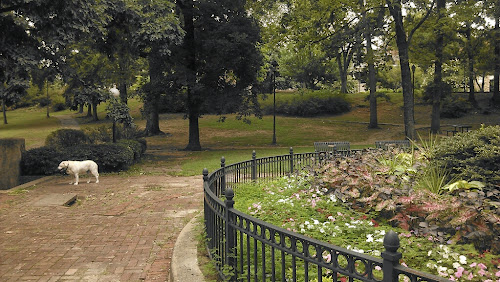 Can you imagine thinking of California as anything other than a granola bowl? There may be more Nobel laureates in the University systems there than anywhere else but we still think of it as earthquake riddled hippie land and as such we dismiss the Golden State. And so when I think of the South I slap myself because I think of collard greens and civil war statues. The South is Atlanta and new southern cooking and hot humid summers and then I met Johnny Coley. 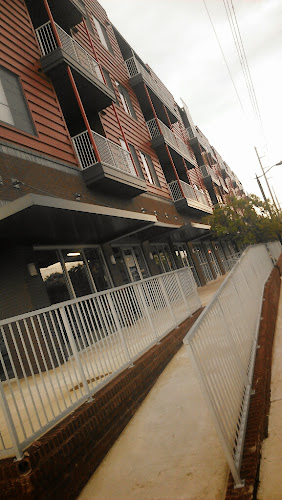 Last time we saw Johnny we went to a suburb of Birmingham called Bessemer, a place where there's an old institution that serves Greek food in an atmosphere redolent of wealth and privilege of generations past. I love The Bright Star Bessemer Alabama | Grasping for Objectivity. But Johnny is a vegetarian and my wife's an explorer and she wanted to try a bright little Mexican place next to her favorite Birmingham hair dresser. So that was where we went. We went inside and Cheyenne, sick of the car elected to sit on the sidewalk and be admired by strangers passing by. 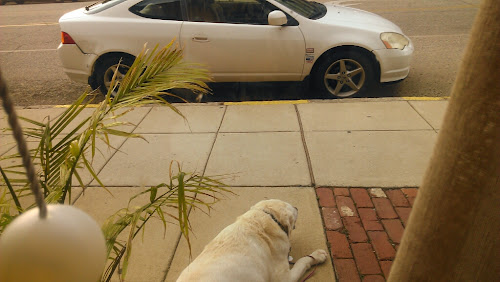 Sol y Luna was nothing like the California Mexican food my wife loves. But it really wasn't at at all bad...Johnny had the quesadilla at the top of the picture and I had lamb and cheese grits which was about as Mexican as I am, but was equally delicious. We talked and with Johnny conversation is a form of exercise similar to fencing. You jab and parry, joke and laugh and play word games. 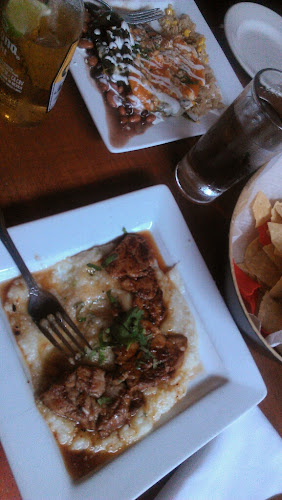 Johnny sees life through the perspective of a man who lives in Brimingham where he was born, where he grew up in a middle class family of privilege, privilege that came through work and commitment to the town. I like Johnny sense of humor, his self awareness and his lack of commitment to those middle class vales. He was the cuckoo in the nest, gay and thus destined to be childless, cursed with an active imagination and intellectual curiosity inherited no doubt form his mother. She is alive and in her nineties and still able to converse though her body is failing. She mused to my wife recently that she couldn't figure out why they became such a liberal family. 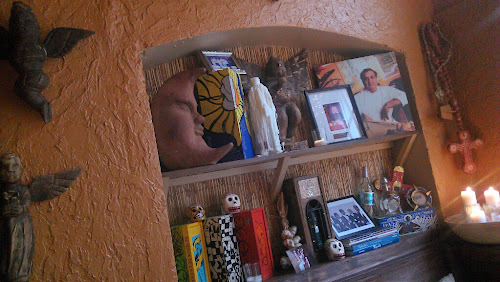 Johnny's life in Birmingham is a mixture of social work visiting shut ins and his part time work at the library, then checking on his mother, and then his art work and he doesn't travel much. Birmingham is his life. 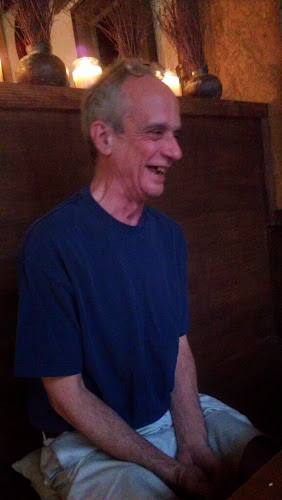 Johnny observes life with his off center view, sardonic in a lid way, ready to see the irony in the daily foibles of the world around him. I enjoy talking with him as he sees the nonsense in politics as well as the good. He shares my off kilter appreciation of the off kilter world in which we live. 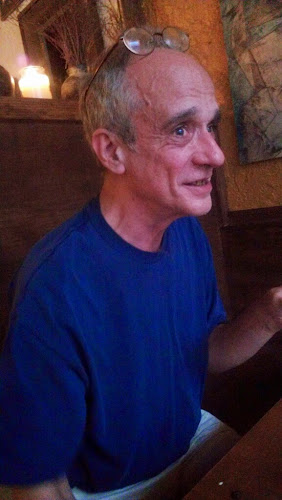 Johnny also has a sweet tooth like me. My wife ad I shared churros, fried dough sticks rolled in sugar while Johnny had a plate of ice cream on a chocolate cake, which is decidedly not Mexican but was delicious anyway. 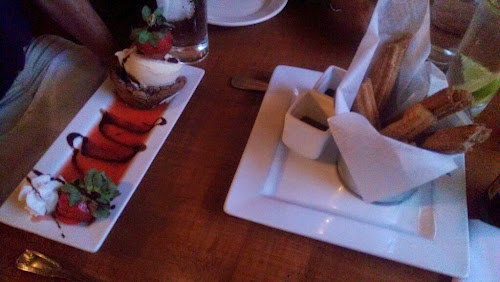 We walked a little to cheer up Cheyenne and to settle our dinner and as dusk fell we drove Johnny back to his condo tower and we took off for our hotel, an older La Quinta staffed by an unhappy front desk which for the first time threatened to not let portly old Cheyenne into the hotel. Okay I said, she's too big, cancel our reservation. Screw them I knew there were two other La Quintas in Birmingham. What a strange reception, they let us stay anyway when I called their bluff. Decidedly we weren't in Tupelo. 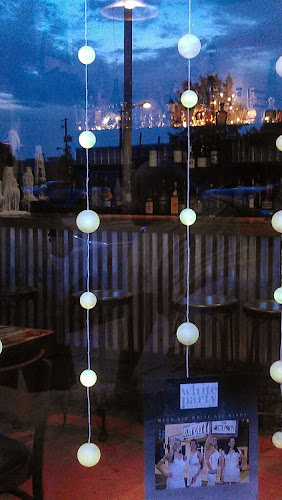 Johnny the Artist. You'll have to figure it out for yourself. 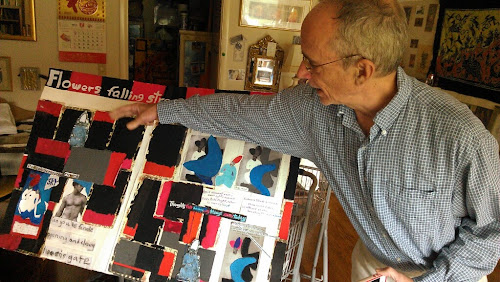 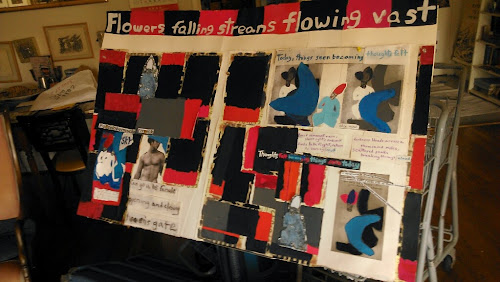 Cheyenne found a comfortable spot in the artistic chaos and curled up. 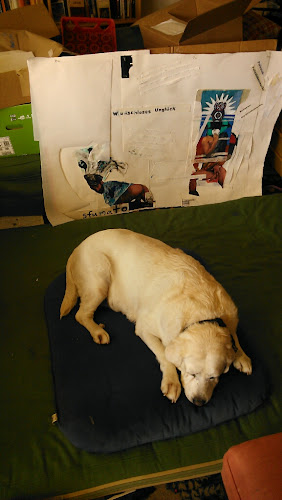 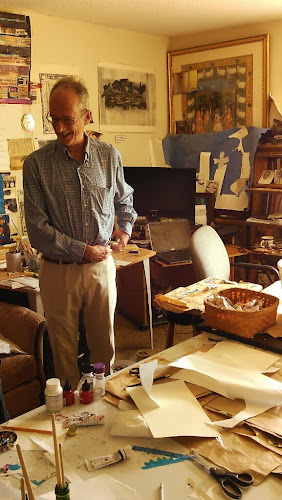 I left my wife with Johnny so they could catch up on their old times and I could in my own way catch on my old times. 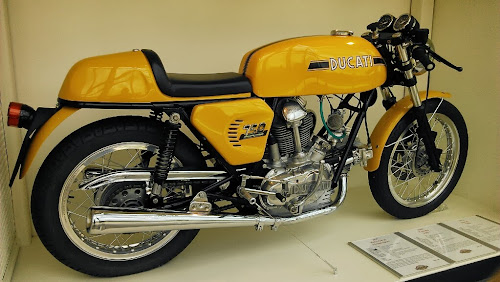 The Barber Vintage Motorsports Museum is twenty minutes east of Birmingham in a town called Leeds. Old man Barber ha sued his fortune from land speculation in Brimingham to build a museum for motorcycles and his Lotus cars ad in the back he has a world class race circuit. Me? I go every time whe in Birmingham to check it the motorcycles on display. Above a Ducati 750 Sport and below an Egli-Vincent. 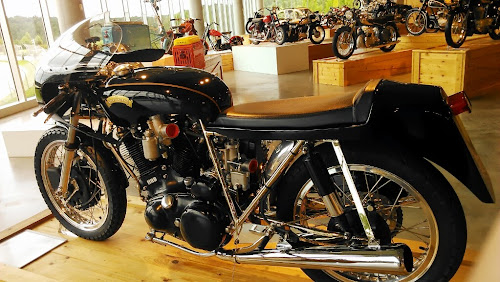 A BMW R69S, a legendary motorcycle: 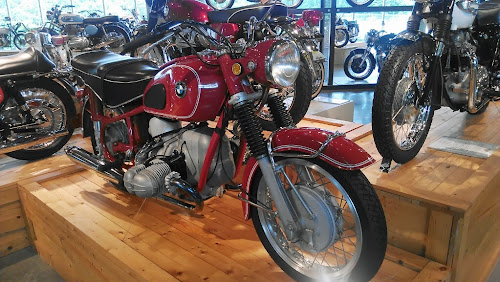 When I look at this Indian I think of modern riders participating n the cross country race called the Cannonball after the first man to ride across this country on a motorcycle. 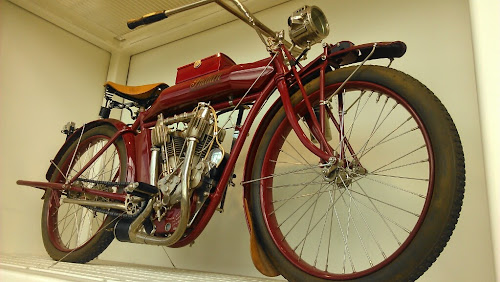 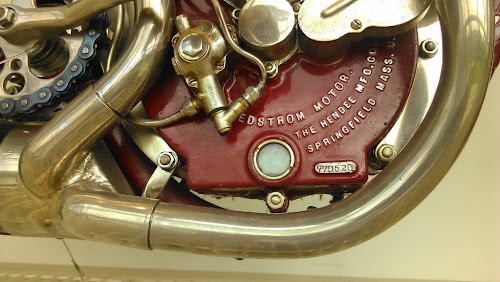 Notice the very modern oil level window in thenIndian, above. 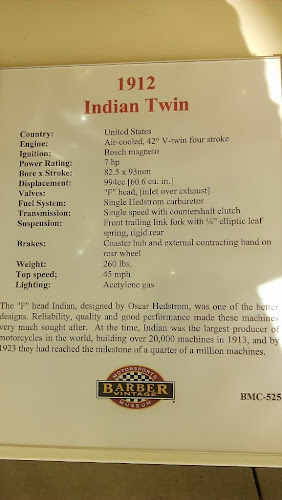 A Motorcycle Cannonball Coast To Coast Antique Motorcycle Run isn't for everybody but sod crazy people sign up every time for this run. On motorcycles like these. Amazing. 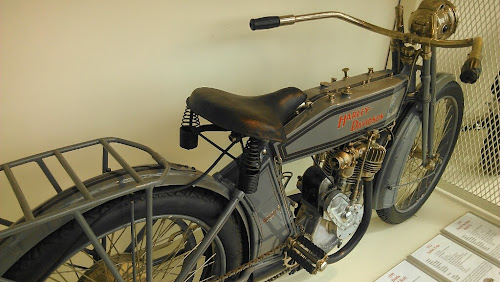 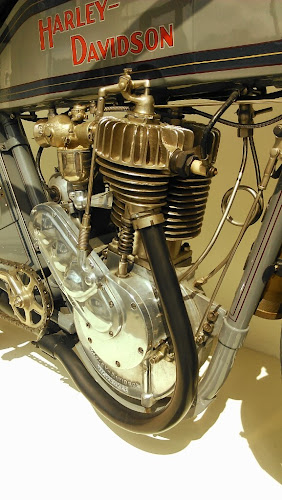 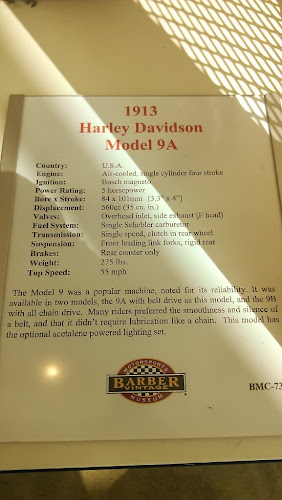 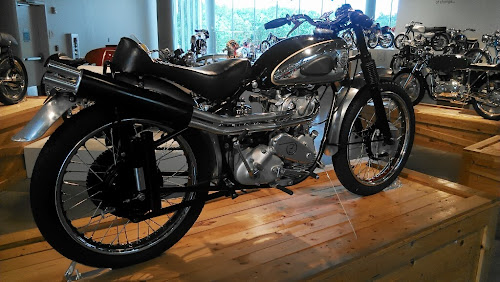 A Zimmerman? A revolutionary American prototype hand built by a man with a vision for a different kind of engine that never got produced. It's here atthe Barber. 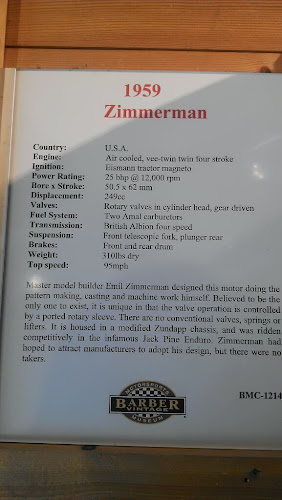 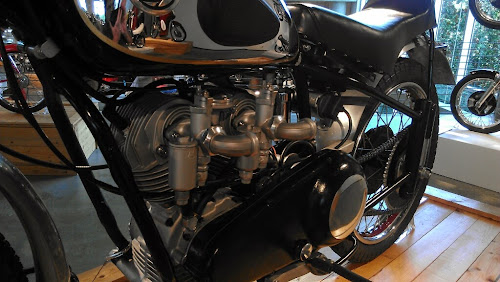 I have a great time every time at the Barber and as a result you will have to put up with a full essay tomorrow with tons of pictures. 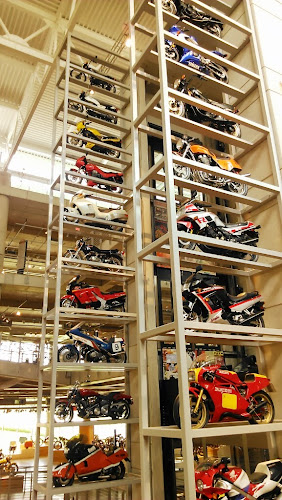 Three modern Triumphs lined up in a row, a Bonneville nearest the camera, then a Thunderbird 1600 and in the back a silver Trophy, the new touring motorcycle from Triumph. It was the first time I'd seen a Trophy and it looked huge to me and unwieldy as modern touring motorcycles seem to have to be. 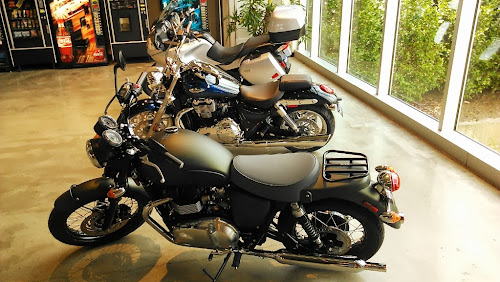 The Harley exhibit includes a replica of the plain wooden shed where the first Harleys were built. 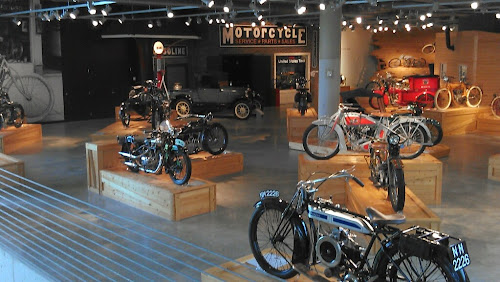 That was a fun morning and worth every penny of the fifteen dollar entry fee, Barber : Home.