Everglades Vespa: End of the Adventure

Heading home from Big Cypress i started by heading east on Duff Bridge dirt road cutting through the countryside toward Highway 27. Behind me it looked like cane clearing season might have begun. 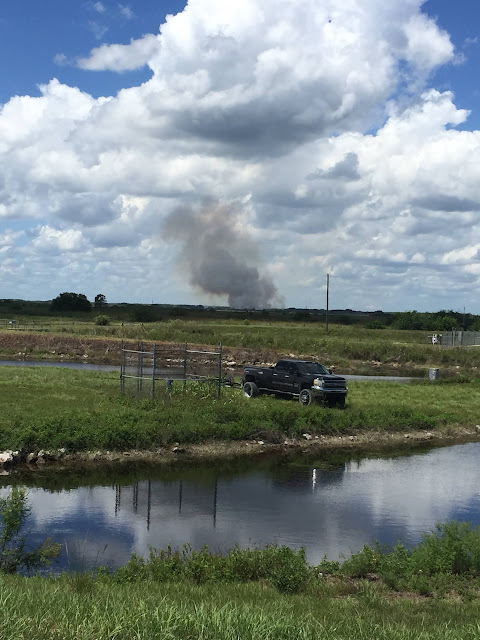 Sugar cane is a dire crop and Big Sugar offered to sell much of its vast holdings to the state for land reclamation and restoration. The Republican State Legislature and Governor rejected the offer in their usual short-sighted manner. Sugar cane sucks the nutrients out of the soil so completely it takes huge amounts of phosphate fertilizer to keep the crops growing each year. The phosphates leach through the soil into Florida Bay and contribute to wrecking the ocean environment including the coral reef in the Keys. Brilliant stuff. Plus you have to burn off the new crops to clear the fields for harvest thus killing vast swathes of terrified wildlife. Modern techno-agriculture is a nightmare. 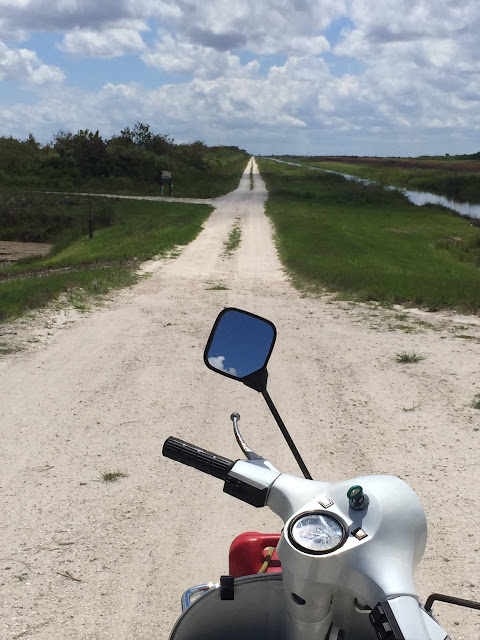 I love these wide open spaces, silent but for the wind whistling in your ears.  People always nag on about alligators in South Florida as though they are as common and as lethal as deep snowdrifts in Michigan in winter. In point of fact- not true. I saw maybe one shy alligator head in a canal all day and one whopper I did see at the Seminole museum scuttled off like a cockroach surprised by a sunlamp,  running madly away from my Vespa and throwing itself into a pond and out of sight before my iPhone left my pocket. Terrifying indeed, but keep spreading the rumors to keep people away. Florida is almost as deadly as Australia when it comes to wildlife. Ho Hum. 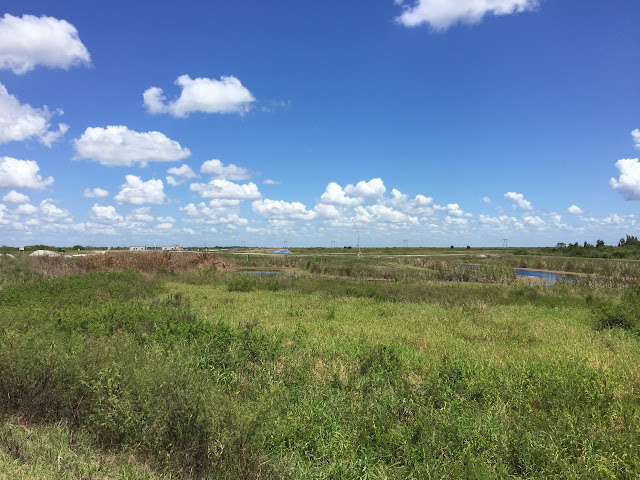 Evidence that rainy season hasn't yet kicked in, which is why insects were not present and I got not one bite from anything all day. 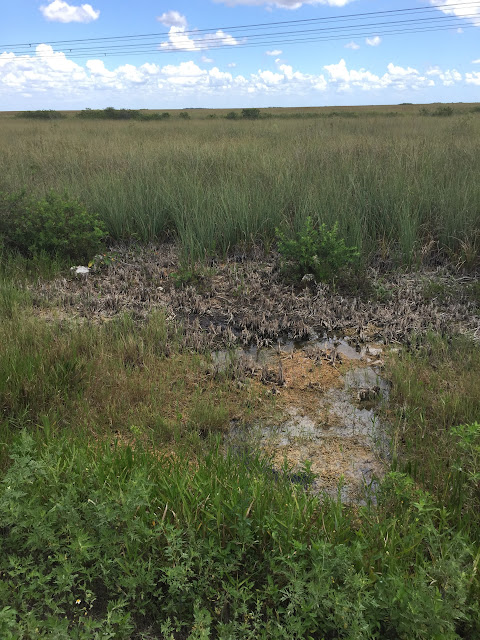 I looked these guys up on my phone. In some manner not explicable to me they were driving towards each other on the track in their SUVs one night around 9:30 pm and they hit each other head on. Talk about bad luck or bad timing or something. The road is dead straight for miles. 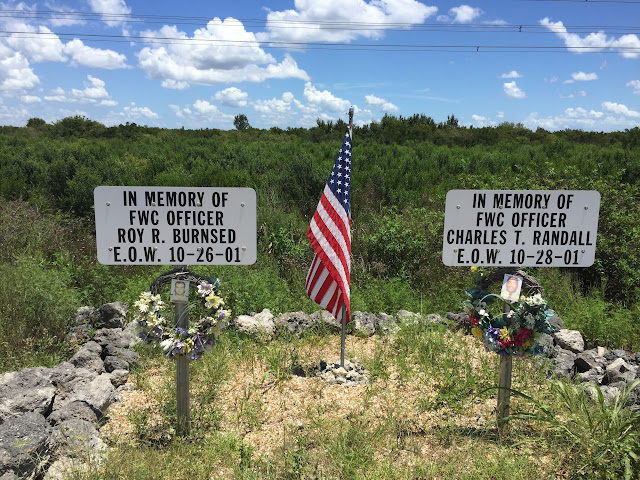 I saw no turtles or alligators or anything much. A few cormorants sunning themselves, a couple of deer which surprised me as they could have been exported from the Florida Keys, and a bunch of turkey vultures. A bunch of vultures flying in circle is known as a "kettle" I am reliably informed. This was a solitary specimen not scared of me: 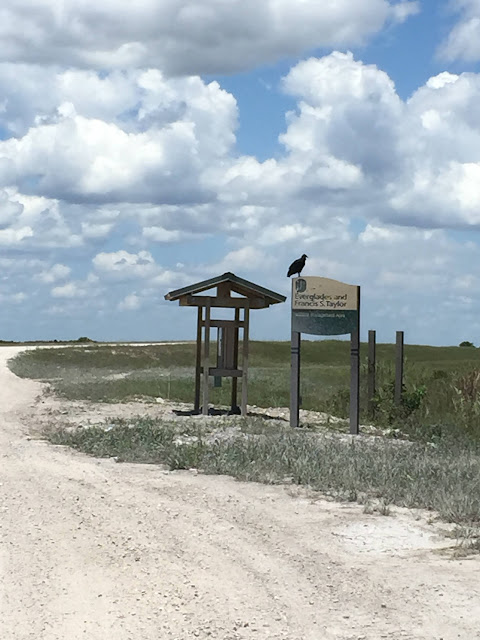 I got back on the Highway 27  superhighway, dodging trucks which passed me at 65 while I was bimbling into a headwind at 53  miles per hour. At the occasional traffic light I would pull ahead of the 18-wheelers and they would slowly catch me up again and pass. Eventually we turned onto Krome Avenue where I pulled over to let faster vehicles pass. That's where I saw this, a reminder to stay observant. 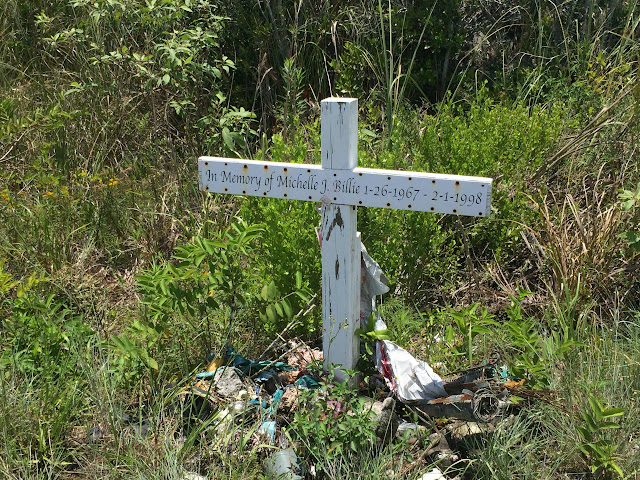 I was back in the miles and miles of one lane roadway and I had to pull over a few times until I got snug behind a 50 mile per hour truck and a small retinue of vehicles stuck behind him. This no passing rule is insane on Krome Avenue. The sooner they bring in self driving cars the better for all of us. They should be easier to pass when riding a motorcycle as the car won't take it personally if you pass it. 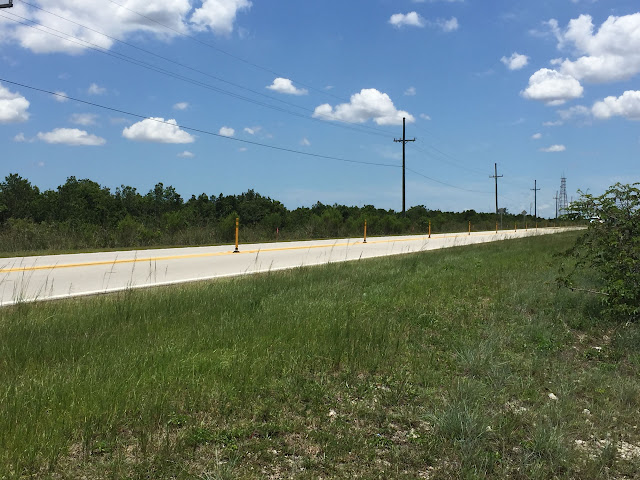 Further down Krome I was back in the land of stopping and starting. Plus the traffic is painfully slow. I stopped for a break next to this radar sign. Check it out no one was even close to exceeding the modest speed limit! Notice the long straight roadway! 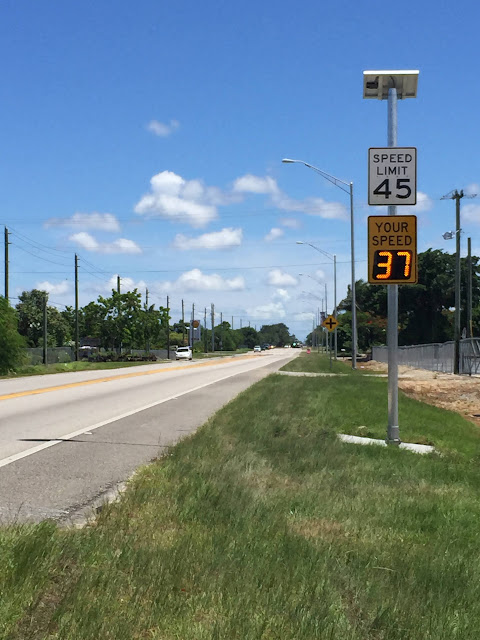 In Homestead I stopped to photograph this other piece of Florida DOT madness. These signs have cropped up in Key West on North Roosevelt prompting the belief that the Department of Transportation is trying to encourage cyclists to commit  suicide. Here in Homestead this madness is being promote on a single lane main street. Florida already allows cyclists to ride on sidewalks, yielding to pedestrians. The need for these signs is not apparent to me. On my way through town at seven o'clock Friday morning I noticed this restaurant. On my return at 3 in the afternoon I stopped to buy dinner, brown stew chicken and curried goat with a beef patty for appetizer. Twenty bucks, a cheerful smile and I was on my way. Two hours to home. 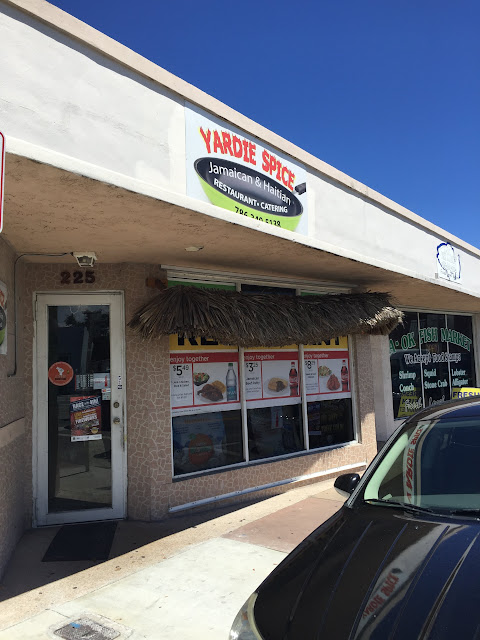 My mistake was not taking Card Sound Road and instead mixing it up with streaming traffic rushing to a getaway in the Keys on a Friday afternoon. I still am not sure what happened but the Vespa seized and I had to cool off and restart a couple of times to get onto Key Largo.  I haven't yet stripped the engine to figure out what's up but at the moment I have other priorities for time and money so the old Vespa can have a rest for a while as I get my business up and running. I was surprised because the scooter has been running well for more than 4,000 miles and I have had it up to full speed without any worries on my commutes.  This file photo from my archives shows how intense traffic can be, and was on Friday afternoon. I should eased up instead of trying to keep up and keep out of the way. The shoulder was the right place to ride. Oh well a learning experience! 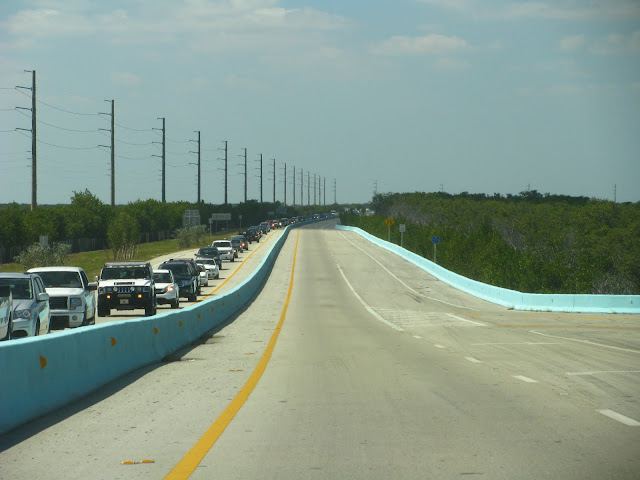 I called my good natured wife who dropped everything and drive 90 minutes to pick me up from Mile Marker 103 in her Fiat. I drove us home and Saturday morning Cheyenne and I made the three and a half hour round trip to collect the Vespa from its overnight resting spot. 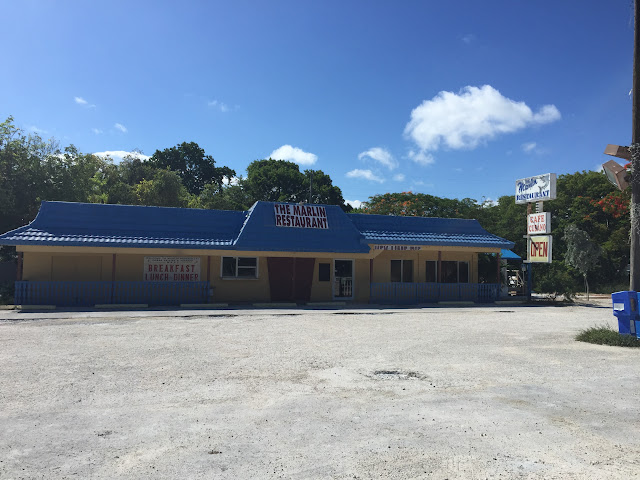 Dusty and well worn after our Everglades adventure I need to figure out what happened and why and start the testing process again. Right now I have to ride the automatic Vespa and the Bonneville which is no hardship though I am puzzled why the old girl seized. I shall enjoy the detective work. 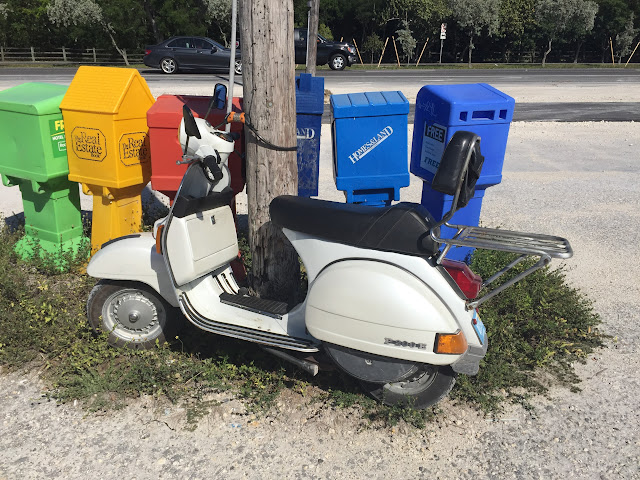 I have to say I did rather miss the Bonneville on the trip which was an interesting reaction to me. The motorcycle has all the speed you need to keep up with and pass regular freeway traffic and headwinds, cross winds, hills and gravel are no worry to my versatile Triumph motorcycle. I was surprised really how tedious droning across the landscape at 55 could become. 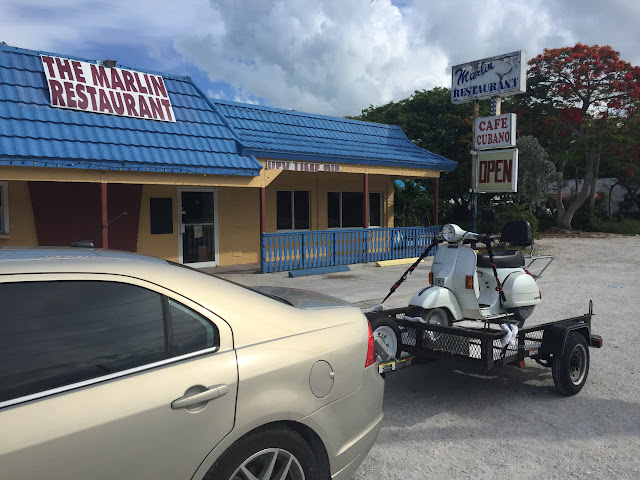 The Vespa is ideal in the Keys where restricted speed limits become a drag on a 65 hp motorcycle. The Bonneville enables me to pass about any car and puts me front and center for attention I don't really want. The Vespa keeps me honest and allows me to relax and enjoy the ride even at what would otherwise be a tedious 45 mph. After 45  years of riding I have found my ideal bike in the Bonneville, a great all rounder and great fun to ride. The Vespa is my nostalgia machine an an ideal short hop ride. 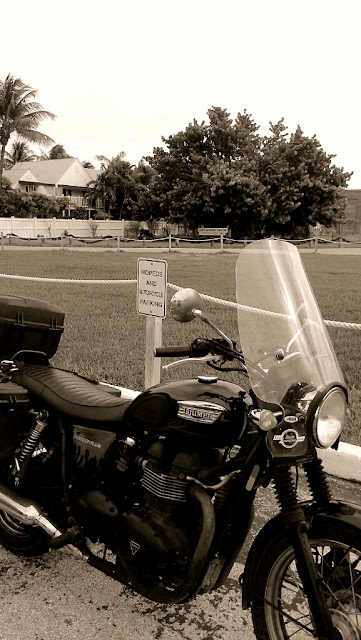 But on the open road the Bonneville remains my preferred ride. I could have cut off all the Krome Avenue nonsense with the Triumph by hopping on I-75 and zipping up the Turnpike at an unobtrusive 75 mph. And in 85,000 miles the Bonneville has stopped running only once after giving me lots of warning (that I ignored) when the rectifier, a hundred dollar part, failed and the battery went flat and I couldn't  restart the bike during an interrupted commute. Another time it took a long time to start after a rainstorm but a pair of new plug wires and caps solved that. I need to respect the limitations of each ride and enjoy both and while the Vespa is laid up I need to commute slowly on the Bonneville! I'm lucky to have the choices and lucky my wife hasn't yelled at me for screwing up. What a great trip it was - next time on the Bonneville!
Posted by Conchscooter at 12:00 AM 4 comments: