I figured the state park on the beach in Key West was overdue a visit from Rusty and I. No dice. 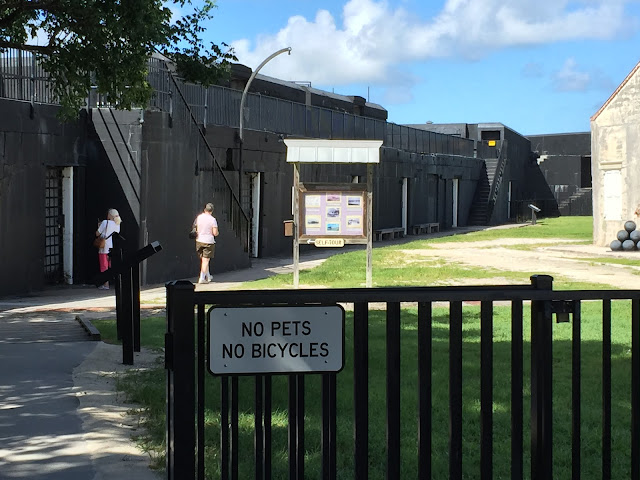 For pictures inside the fort check This Link. 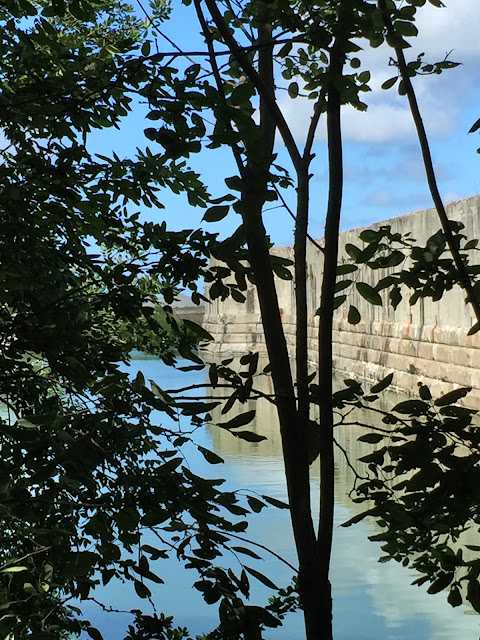 There is a little nature trail around the moat. It's a five minute stroll through the trees on a raised piece of ground which means the vegetation is something other than mangroves...known as hardwoods. 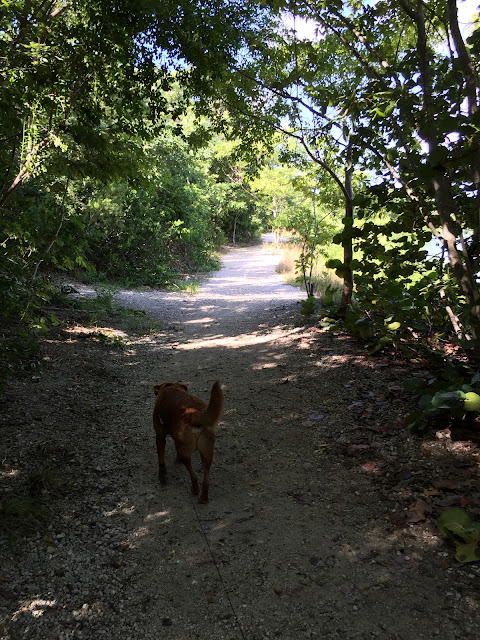 I like to come by here from time to time to remind myself of tree names because I can never retain the labels. Besides at $4:50 a visit its a bit pricey as a pure botany lesson. 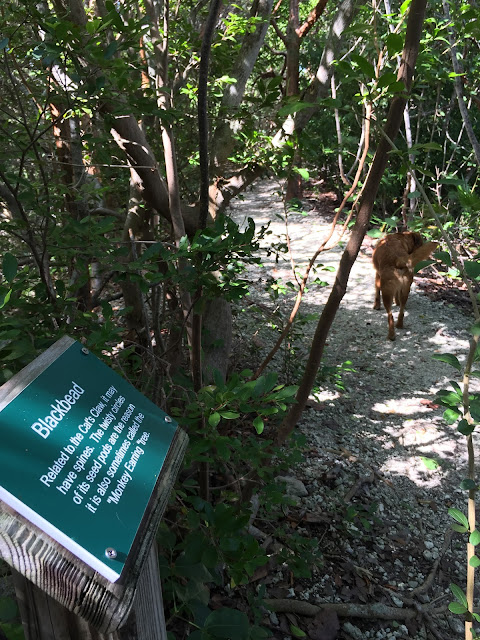 Rusty saw  possibilities in the trees but trhere's that leash thing going on here. 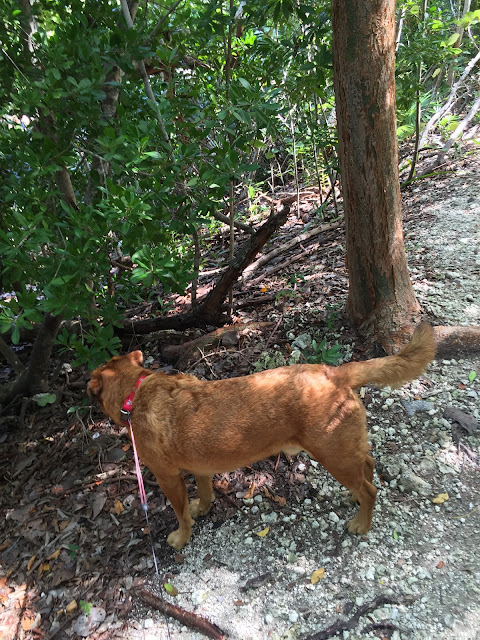 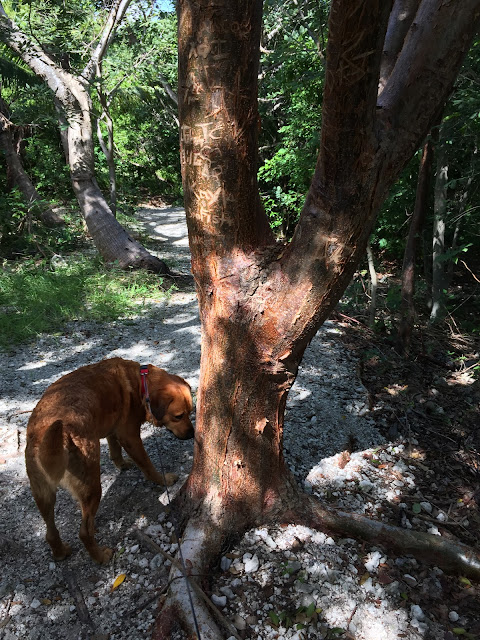 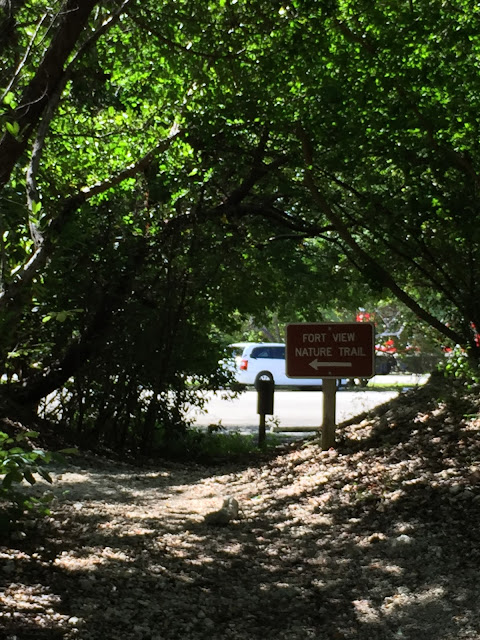 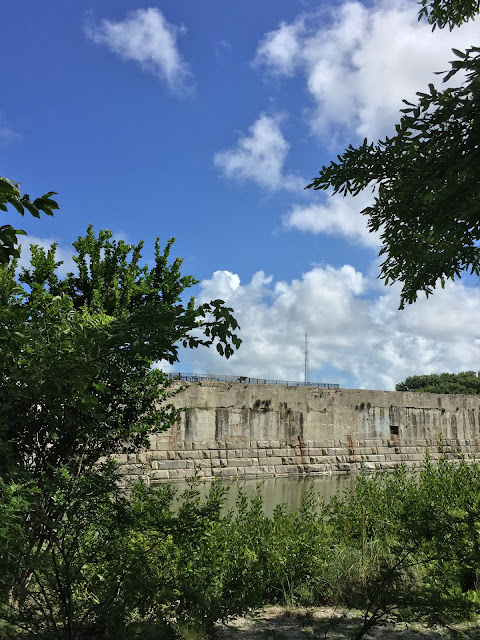 And then one pops out into what looks like a real meadow. 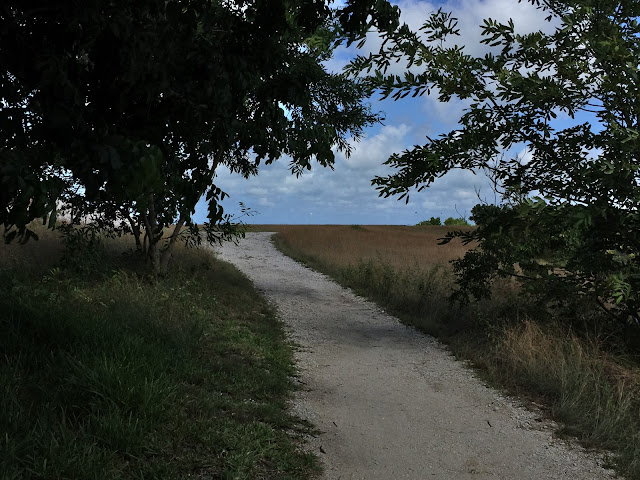 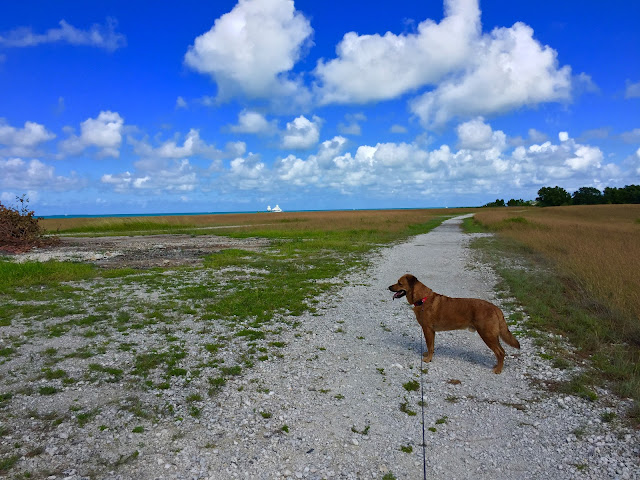 Except there are signs scattered on the outer fringes. 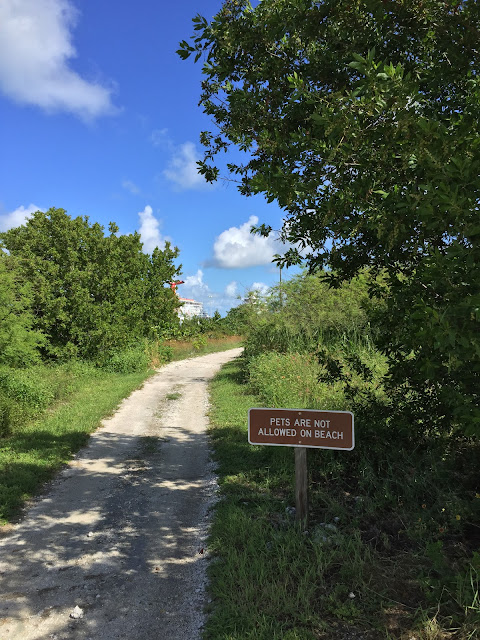 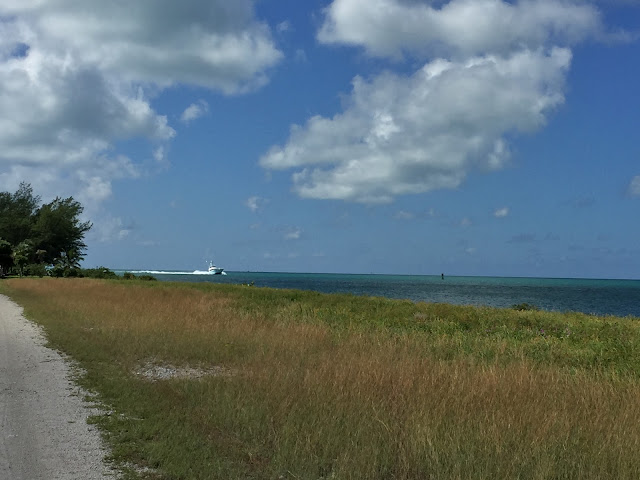 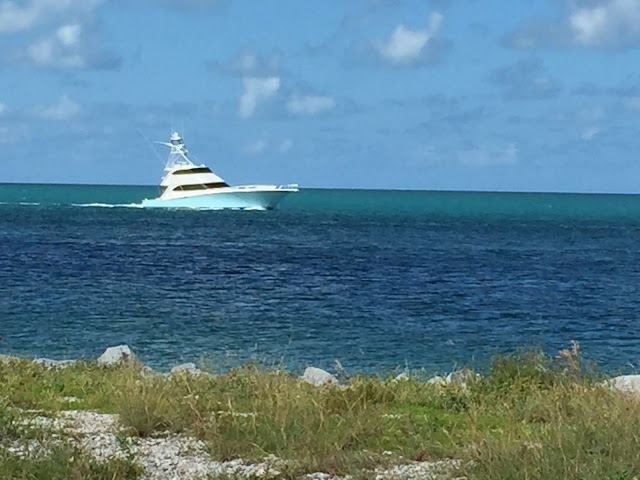 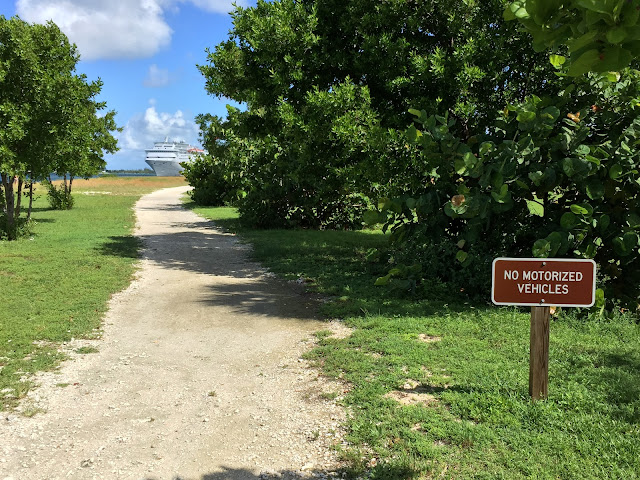 And then as we approached the pines for a look out at the Straits of Florida I ran into my buddy Curt who was taking a break in the shade. 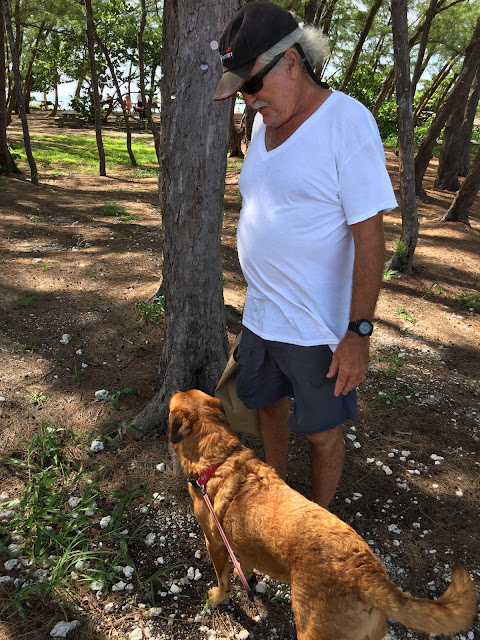 We met when we were living on boats in St Petersburg at the Vinoy Basin in 1989. Curt sailed to Key West and I joined him for a while before I took my first tour of the Bahamas. We lived alongside at anchor in Key West for a while and Curt taught me the ropes of living cheap afloat. It was a rather more wild west lifestyle than I fancied even then when I was in my early 30s but it suited Curt just fine. He lived at anchor and knew where to park his dinghy for free and where to get drinking water and where to dump trash.  Me? I wanted a regular situation paying  dollar a day for those services no sneaking around. I was a party pooper but we both enjoyed the high life at the Winn Dixie food buffet. Years later Curt is still living on a boat in Key West working a couple of jobs and making this strange town work for him in ways many people have never managed to figure out. He had to go tie up a cruise ship and serve conch fritters to tourists, a job he's held for twenty years. A record. 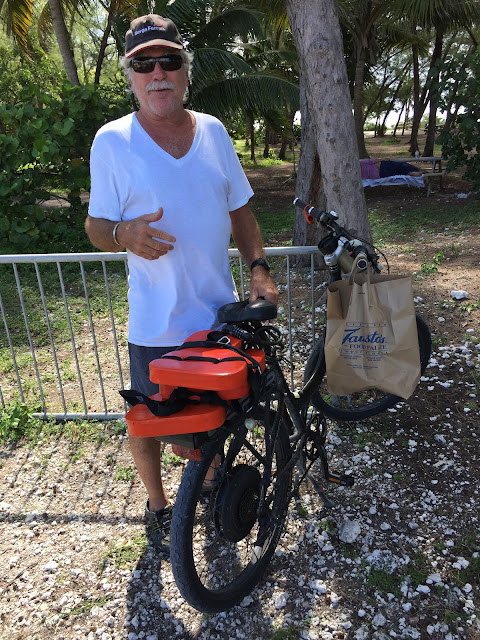 Not everyone is as industrious: 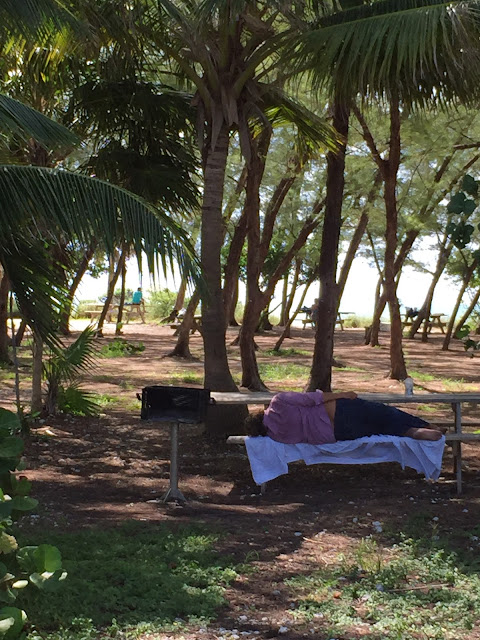 My conversation with Curt meant I had no time left to explore the Australian pines at the fort, such as Cheyenne and I had done in years previously: 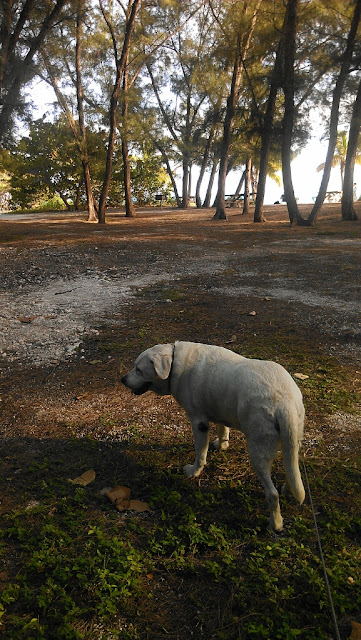 I saw this old pedestrian walkway which used to connect parts of the park across  military land. I figure this bridge could be deployed usefully on North Roosevelt Boulevard to replace one of the much disputed pedestrian crossings which some consider to be dangerous to vehicles and pedestrians. 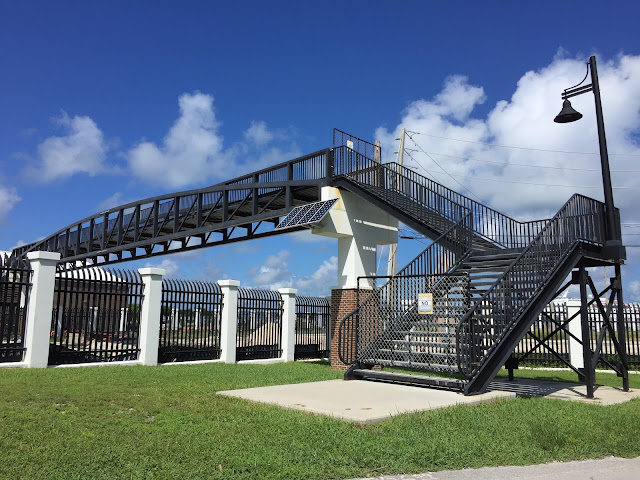 I regret the thought but I may have to come back sometime without Rusty. I hope he doesn't hear me express that thought. It has become such that we go nowhere alone, it seems like.
Posted by Conchscooter at 12:00 AM 1 comment: