From The Archives: To The Lighthouse 2008

Last Thursday was National Lighthouse Day so to mark the day I resurrected this elderly essay from 2008. The Key West Lighthouse  revisited: 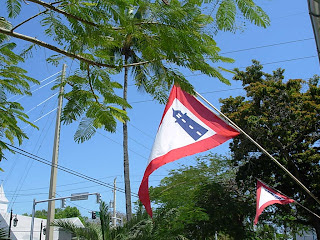 An hour to burn of a Spring afternoon so why not check out the lighthouse on Whitehead Street? 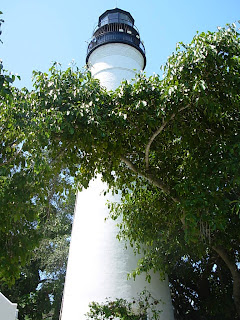 The first thing people remark on about the lighthouse is how far it lies from the beach. There is method to the madness because the original wooden structure was washed off the beach in 1847 so they then decided to build the brick one a little bit inland. And here it is at the corner of Whitehead and Truman in the middle of Old Town. The tower is supposedly somewhere near 90 feet tall and the light inside still works, powered by a solar panel, but it is a tourist attraction these days: 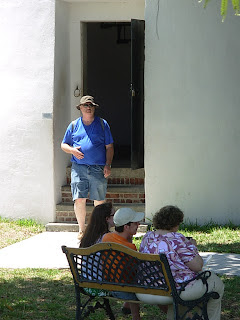 Its a ten dollar admission fee (10%off for local ID) and with that you get a chance to go shopping for gee-gaws You get to peer at the old Fresnel lense that sits inside the admissions building looking very glassy and fierce: 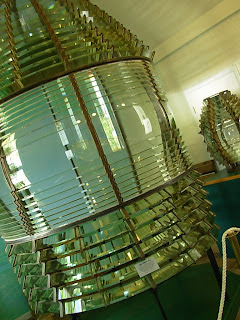 The lighthouse museum complex is quite the little compound, a grassy, tree-covered complex of buildings which includes an 1887 lighthouse keeper's house: 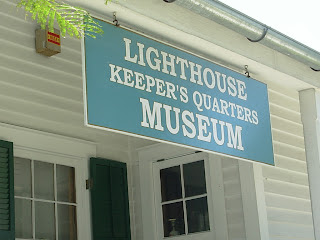 Its a wooden home with luscious honey colored tongue and groove paneling all round inside: 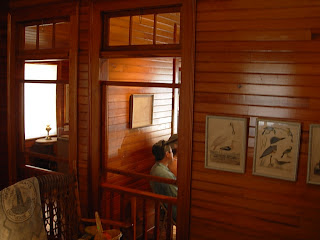 There's the usual audio-visual presentation along with a ton of knick-knacks from the period, including clothing, household items and the like to illustrate the life and times of 19th century residents. The dark interior contrasts nicely with the sunburned exterior: 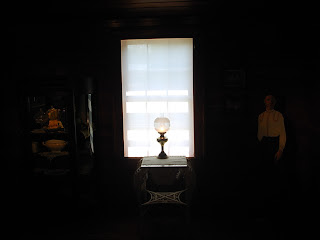 There are 88 steps to the viewing balcony at the top of he lighthouse, and it comes as something of a surprise to me that the place is wide open and anyone can stumble all the way up to the top. There is a sign advising children under 16 need an adult in tow, which isn't a prospect I would relish, what with all those steps winding their way up the tower, keeping up with a youthful bundle of energy: 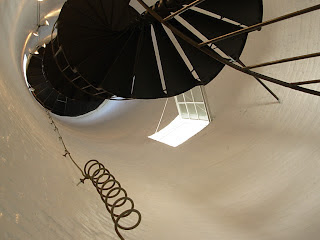 The copper hose next to the stairway was installed when the light converted from kerosene to acetylene which must have seemed like an improvement to all concerned. I took the steps by storm, and happily didn't meet anyone half way up. There is no room to pass, it would be an intimate affair and these people are tourists so they have no clue how to alleviate social discomfort with small talk in awkward situations...But in the fullness of time one reaches the top and there one finds a fresh breeze and safety wires strung everywhere: 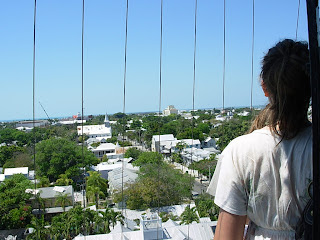 I lucked out on the day I chose to climb the tower as there was a fresh westerly breeze blowing and the air was cool and invigorating. It was on the west side where one can see the lump of La Concha Hotel rising about the little houses of the city. I took a picture of a cute Conch cottage... 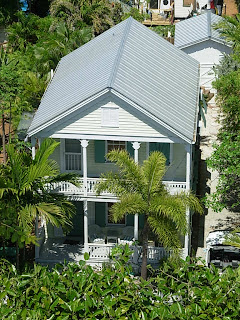 ...a church (with La Concha bigger in the background)... 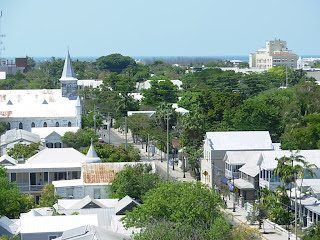 ...and this amusing guesthouse that used to be a gay hang out and when I was a boat Captain I used to recommend families visit the lighthouse forgetting there were scads of naked old men all over this building and its pool. Oh dear, but these days its gone straight so the excitement is gone.
There is a fair bit of greenery all around the city even after the heavy hurricane seasons of 2004 and 2005 wiped out a number of trees, but there are spots that show a lot less trees: 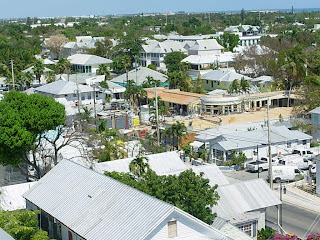 And in the distance always the beautiful blue waters around the city. Back on Earth after a harrowing enough descent even without meeting anyone down below, there was shade to enjoy in the grounds: 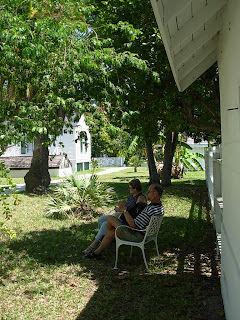 And a little traffic watching on Whitehead Street: 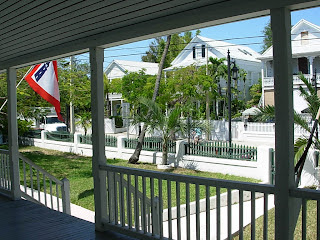 This week the city is celebrating Conch Republic days, a lighthearted end-of-winter celebration that in some measure remembers the wilder days in Key West when wrecking was a legitimate way to make a fortune. The lighthouses pretty much put paid to that as they helped keep ships off the rocks. As a sailor, I still appreciate the role of lighthouses in helping find one's way at sea though a lot of people think GPS has put paid to the usefulness of lighthouses. And so the world turns.
Posted by Conchscooter at 12:14 AM

Conchscooter said...
Sold to straight people to widespread consternation. Everyone started to mumble about all the gays going to Fort Lauderdale from Key West especially when Atlantic Shores got knocked down. We're keeping a couple as museum pieces to remember the good old days.
Saturday, April 26, 2008 at 12:08:00 AM EDT