Originally published in September 2008. I really should go back 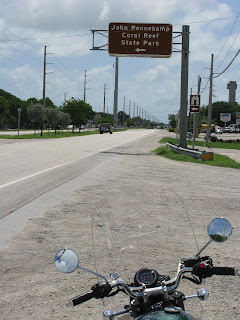 On my recent jaunt up the Keys I stopped off at the John Pennekamp State Park on Key Largo. This is probably the most well known state park in the islands, and the fact that it has received awards is duly noted on a signboard at the entrance. This was my first visit to the park since I had sailed there in 1990, ducking out of strong winds while on my way from Key West to Bimini. 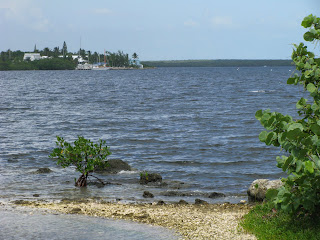 I recall a rather unpleasant stay on a mooring buoy in the lagoon, bouncing around and bickering as we waited for the weather to ease up and let us go on our way to the Bahamas. Ours was an under equipped expedition in many respects and i don't believe we went ashore as we lacked an outboard to propel us back to the boat from the little beach in the park. Our relationship was doomed by these inadequacies and my inexperience to lead us to foreign shores. She still loathes me to this day, and i don't think therapy has helped her either for which I am sorry. I got it right later and the woman who spent a couple of years sailing with me through Central America is still married to me, and calls me daily from Turkey making sure I am eating right and getting enough sleep. We live and learn. 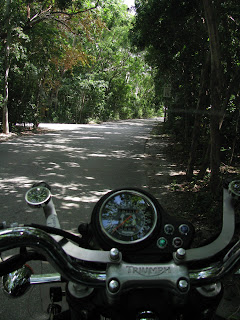 Reminicences aside the Pennekamp park is best visited not in September, I believe, because it is hot: 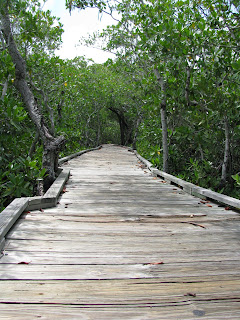 Up North I read people are already observing the shortening of the days, changing of leaves and colling of temperatures. Down here September is the cruelest month, not least because a person raised in a temperate clime in the northern hemisphere has a right to expect the weather to start cooling off. Not a bit of it. 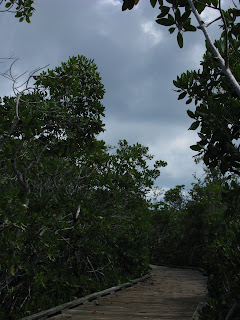 Rain clouds built up overhead but yielded nothing in the way of cooling raindrops. Nevertheless, here I was two hours from home and determined to enjoy this park, whether I got heat stroke or not. It was ninety five degrees (37c) with humidity to match but there was a mangrove trail to be explored, so by God, off I went, down the boardwalk. 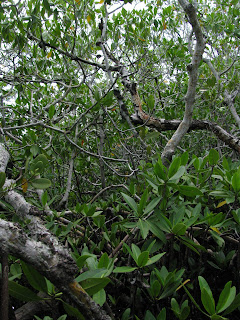 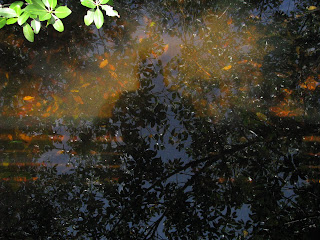 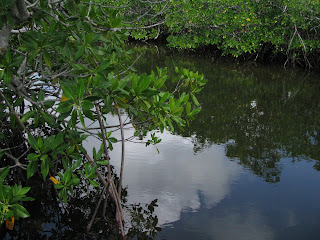 It's not like I haven't seen a mangrove swamp before but I find the light and shadow of these forests to be particular and in some way always varied. In California I used to like walking through redwood forests and their similarities to cathedrals were too obvious for them not to be pointed out by anyone and everyone. I find mangroves, with all their subdued activity, and silence to have a similar effect on me and I tend to get contemplative: 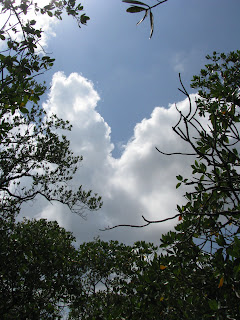 And of course I was denied the chance to climb the observation deck and look out across the greenery. The path was gated, presumably to allow rangers the time to repair damage to the boardwalk, which was a disappointment: 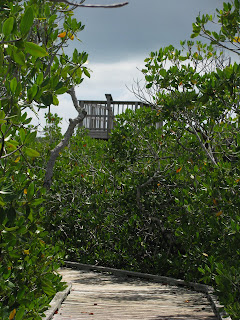 But from ground level, or as close to ground level as one can get in a forest of trees growing out of saltwater I did get to see a boat chugging by, or at least I got to see part of it: 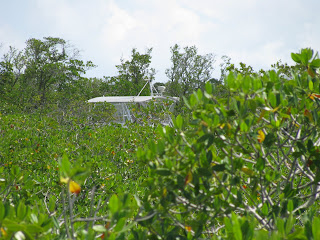 African Queen ain't in it...Back at the visitor center and aquarium they had a little window dedicated to life an death in the mangroves which in some ways looked more active than real life: 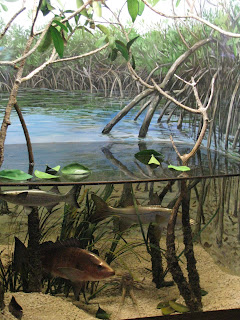 This end of the Keys is where several of the 500 or so remaining American crocodiles reside, and I peered about looking for them but they didn't show. I don't suppose park people would encourage them to show up in the middle of the human madness of the park. A couple of witless young females nearly wet themselves and deafened me with their screams when they stumbled across a small squirrel minding his own business outside the gift shop. I dread to think what a Crocodile would do to their tender gray matter. Of course I forgot to photograph the squirrel, a mammal not yet found in Key West, happily but I did get some other wildlife: 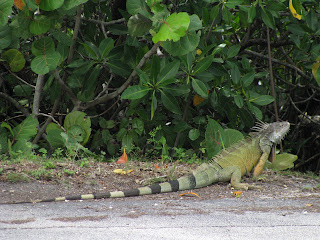 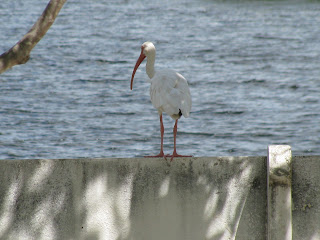 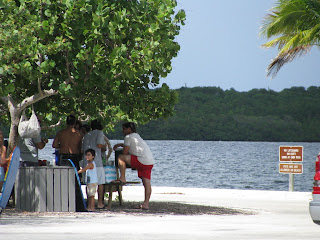 That last was actually a group of humans at the beach evading the sun. The Keys I never hesitate to point out are not endowed with sandy beaches, which some ill informed tourists expect to find when they arrive. Thus it is people who long for sand take it where they find it on their days off. and haul grandpa down to be propped up in the shade of a palm tree: 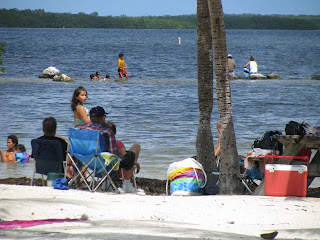 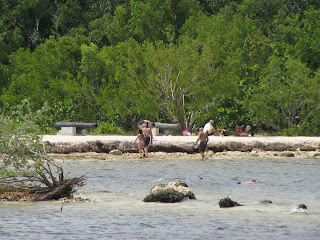 I am not much of a beach goer and all the paraphenalia of family picnics makes me cringe (tote that bale!) but this small stretch of sand brought pure delight to those using it. I parked the Bonneville in a spot where I hoped I could return from a short walk and not burn my backside through my pants: 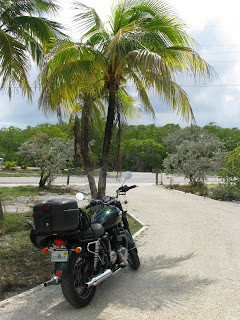 The park is a haven for flora and fauna and the park needs to be there to allow things to grow unimpeded by human interference and development: 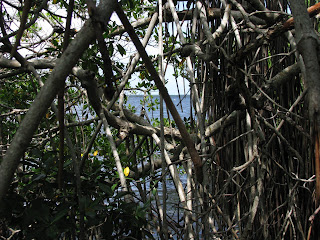 The rest of Key Largo is along suburban tract, houses, businessesand roads everywhere, and as it's Spanish name implies it is the largest Key in the chain, so it's landmass gives the Pennekamp park room to breathe. It offers small marina with room for some boats to dock and take tourists out to the reef, which is actually what the park is famous for. The Bonneville is a great ride, but it doesn't ride at all well on water. Luckily there is an aquarium at the park: 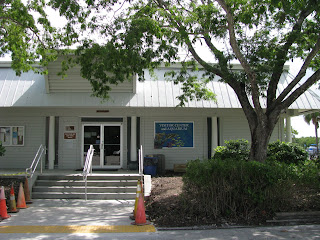 I continue to insist I enjoy the heat and solitude of summers in the Keys, but that is not to say I don't like the cool refreshing blast of air conditioning too, and the visitor center did a good job of cooling me down while the Bonneville rested in the shade: 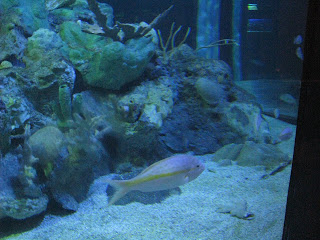 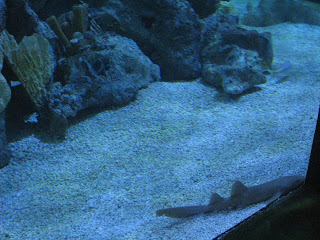 I don't go to zoos, I don't like to see animals locked up, but aquariums generally don't seem so bad, perhaps because I can't empathise with fish. I did wonder about the little nurse shark though, hiding his nose as though to make the world invisible. A small boy nearby was learning all about the fishes and stuff, and I suppose this was really his classroom, not mine: 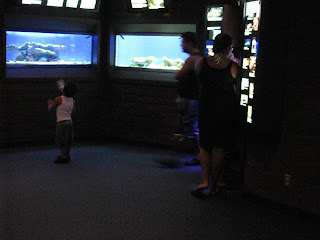 One last stop to tank up with a bottle of refreshing water and I would be on my way. I wanted to be cunning and dropped two dollars in the machine outside (I was still refrigerated from the aquarium visit) in order to avoid the lines inside. The machine ate my money and just to prove I am a slow learner I had the same damned experience in Marathon when I stopped for gas and the soda machine failed to cough up a bottle of water for my money. 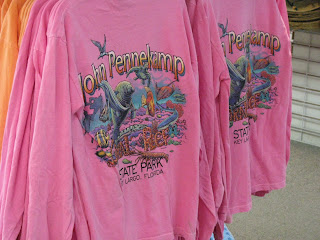 The shoppe had stuff to sell and one interested window shopper caught my eye. My thighs are nothing to write home about but I do keep mine covered in public and don't go shopping in my underwear. He should follow my example: 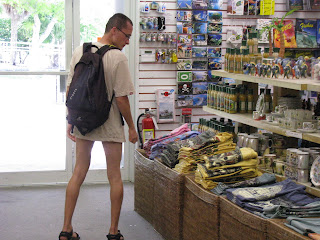 So we close with a little thank you to Mr Pennekamp, a Miami newspaperman and outdoor enthusiast who pushed and pulled his strings to get the park created. He was successful in 1957 and there is a photo of him happily casting, on the wall of the visitor center. I think he would be pleased to see the park still there. I am.
Posted by Conchscooter at 12:00 AM No comments: