When I came to the mountains of Western North Carolina last month this was what I came for: 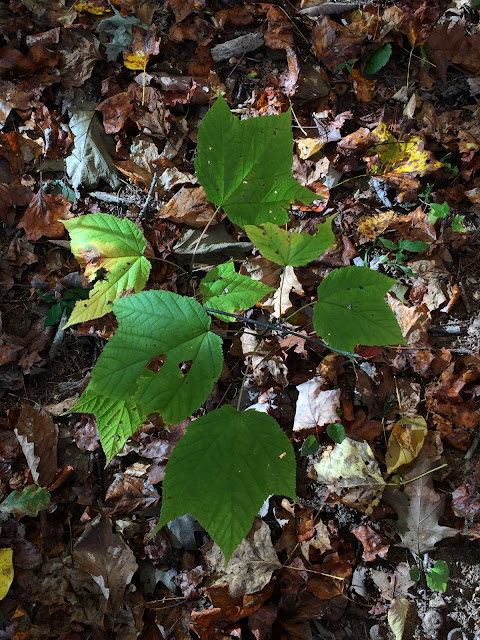 I came to see the mountains and the views they produce, the varied elevation, the different kinds of trees, the falling leaves... 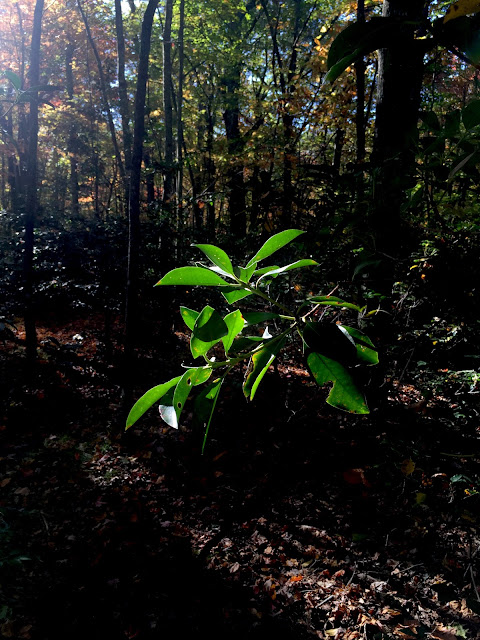 ...the different shade of light and the clarity of mountain air. 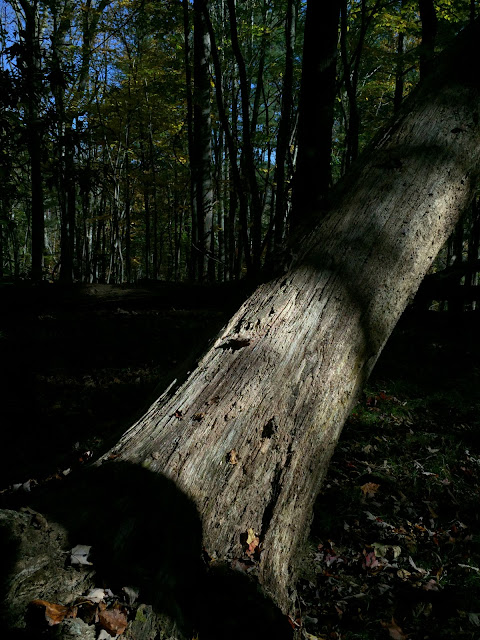 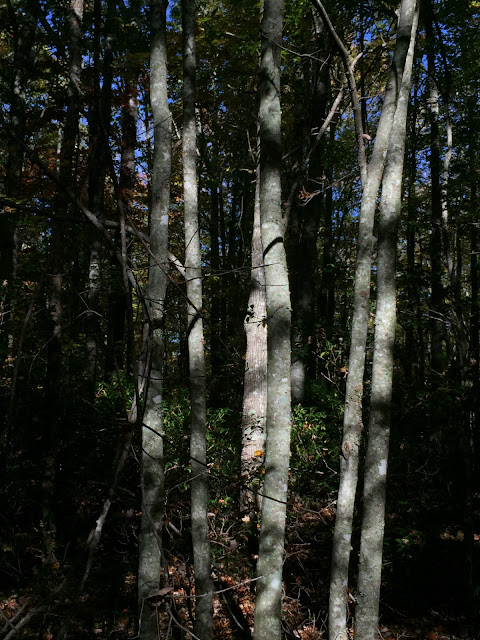 Rusty and I got lucky as we hit the last hot (80 degree) sunny week of the Fall according to forecasters which also proved to be the very week that the changing colors of Fall were at their most luscious. It was well nigh perfect. 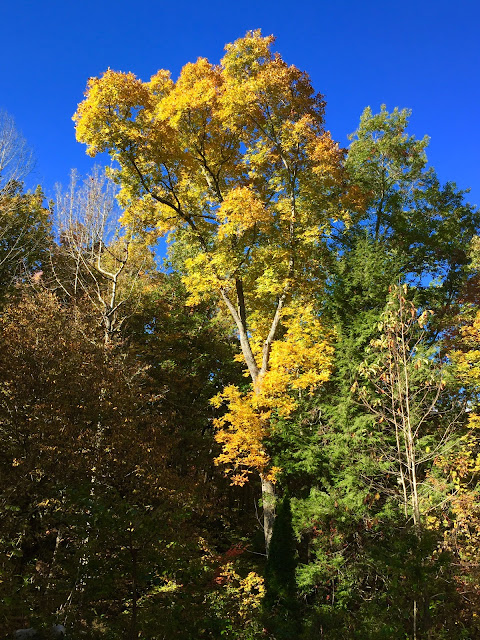 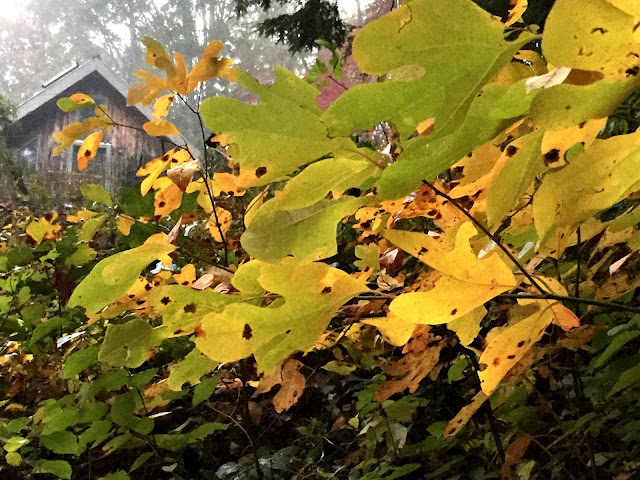 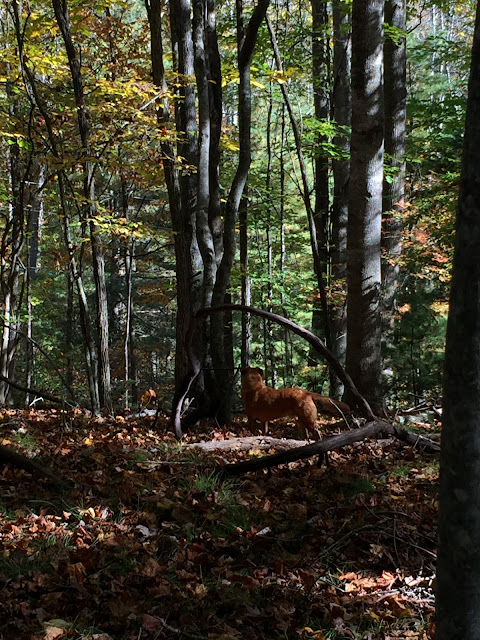 Rusty was quite intimidated by these new surroundings and stayed close to me in a way I had never expected. It wasn't until our last day (Day Four) that Rusty felt secure enough to take off by himself for a few minutes, crashing through the leaves like a yak through snow, in pursuit of who-knows-what chimera. 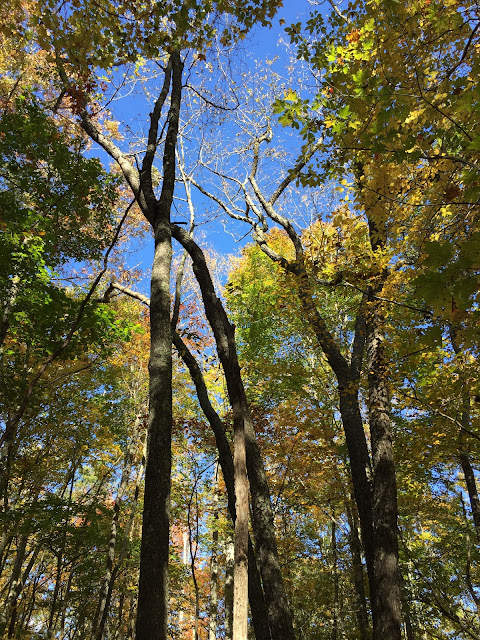 Nights were cold, around 50 degrees but there was no wind, so when we woke in the morning the fog hung low and dripped everywhere. Rusty usually wakes me before dawn when we are at home but on this trip he slept solidly until the sun was well up and the outside air was drier and warmer- which suited me just fine! 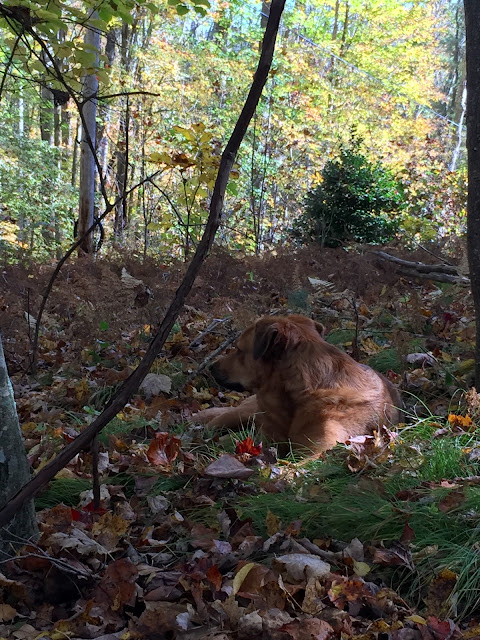 My sister-in-law who has lived in these woods for forty or more years took us on walks around Celo community including one spot where an Appalachian State professor of physics keeps his garden filled with tangible exhibits of physical principles.I climbed the ladder and launched a bowling ball through space: 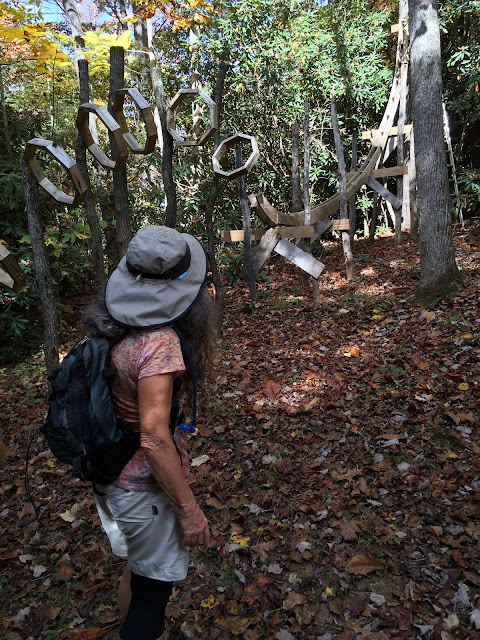 Then we set up and played a line of swinging bowling balls in some sort of display of Foucault's pendulum ( I think, there were no instructions)... 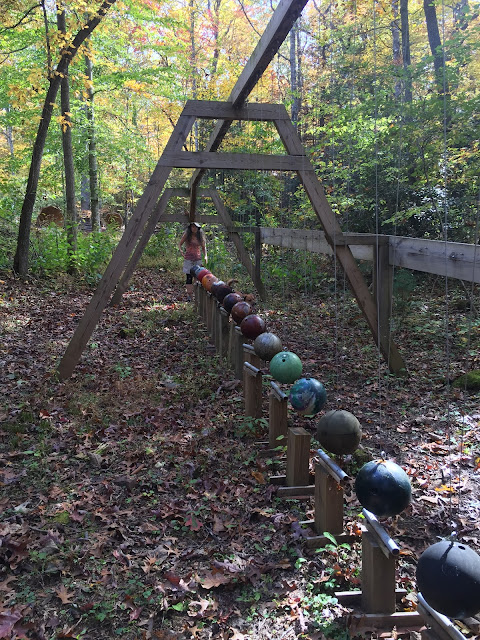 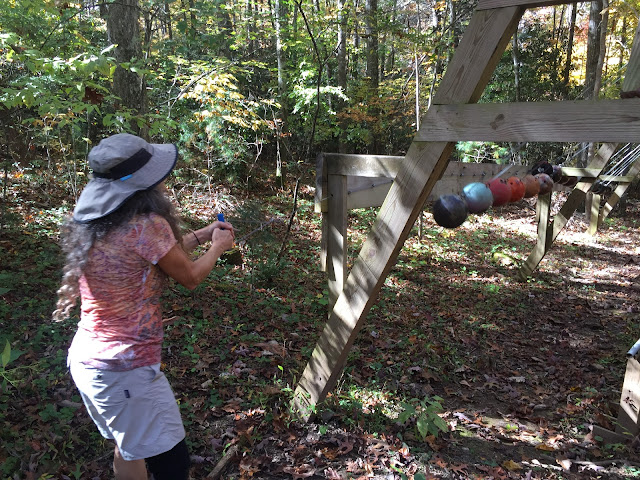 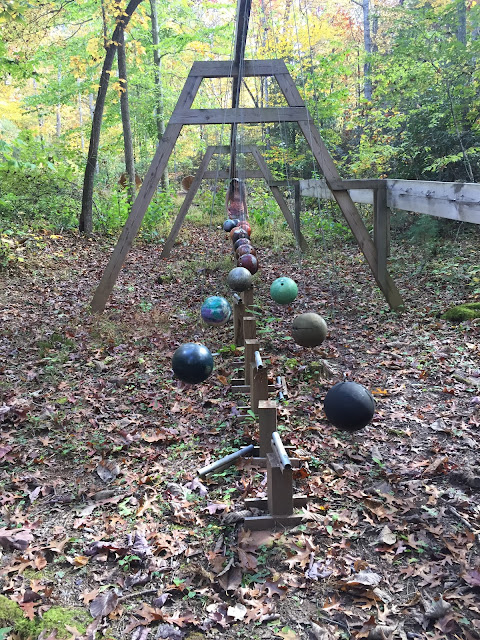 It was someone's home in the woods and because Celo is an intentional community of like minded people, and because Geeta is an elder of the place we got to hang out in this magical spot for an hour... 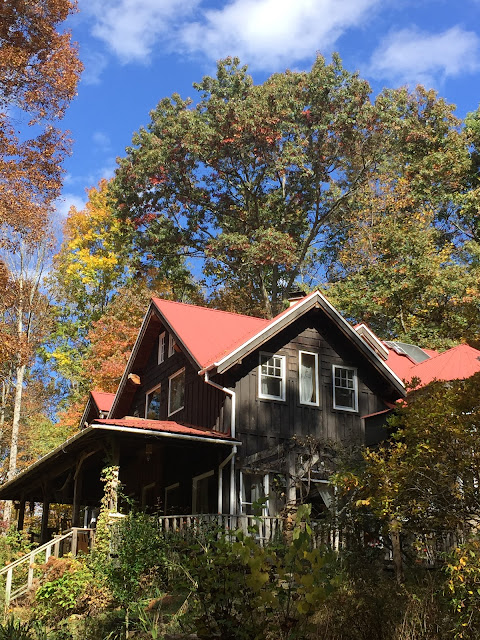 ...and played an automatic xylophone by rolling steel balls down a slope... 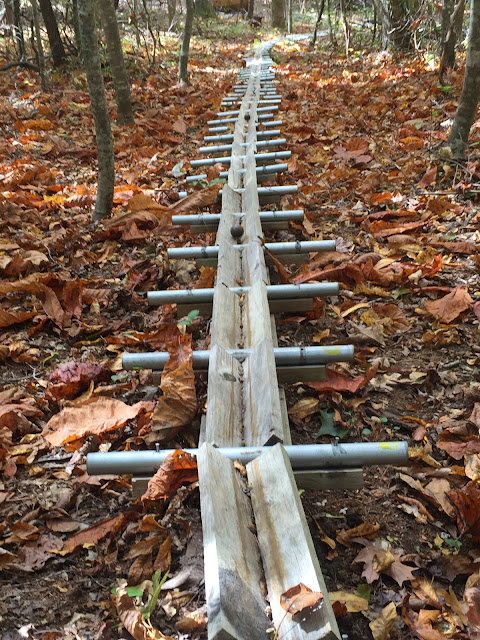 ... and we checked the local perfectly formed fungus population: 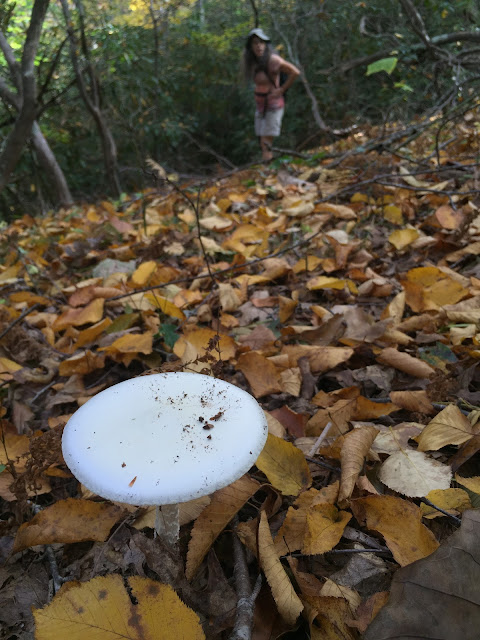 Elpenor Ohle was a medical doctor who helped open the Celo Health Center after World War Two. The community itself was founded in 1939 and they also wanted to offer medical care in a part of the Appalachians where such services were rare. Very laudable I'm sure, but the good doctor's memory lives on in Ohle's meadow where members of the community come to camp and take picnics: 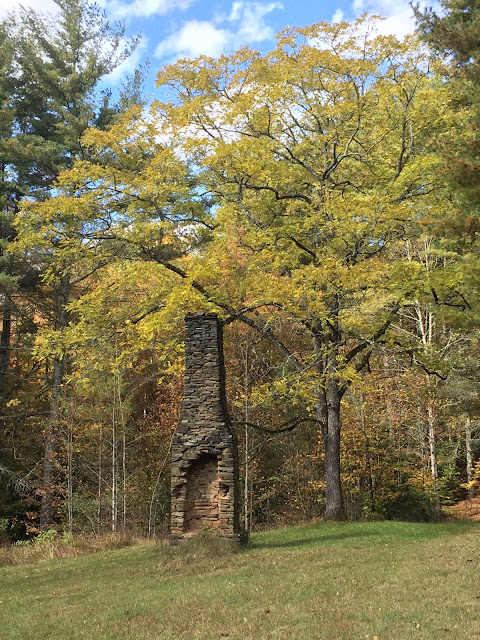 Rusty really started to come into his own here, running wild and free, dipping in the pond and disappearing in the rhododendron thickets to the sounds of crashing leaves. 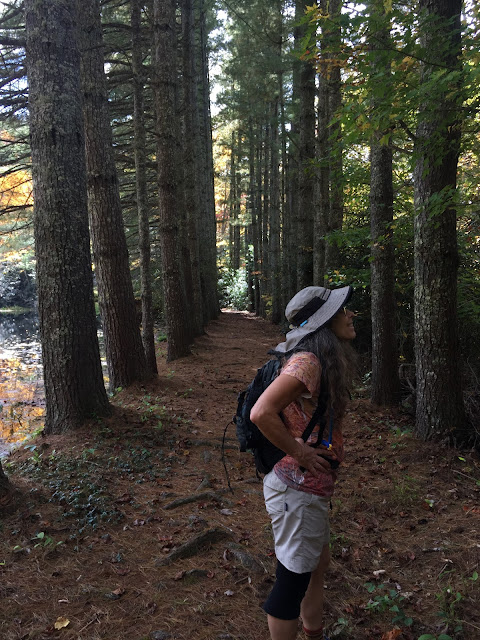 What an idyllic spot. 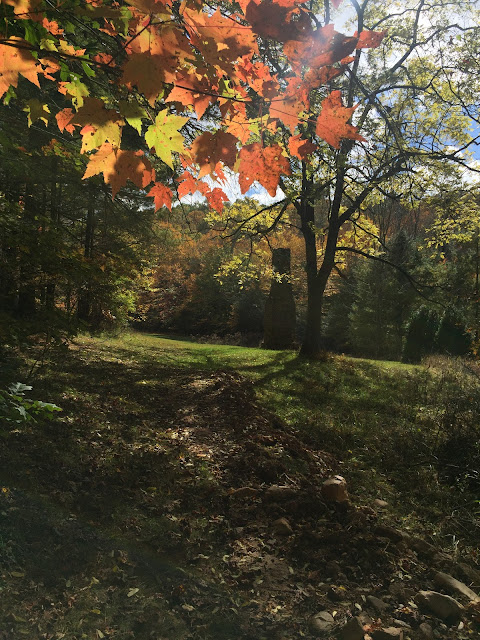 A pause to catch his breath at the remote Celo cemetery. 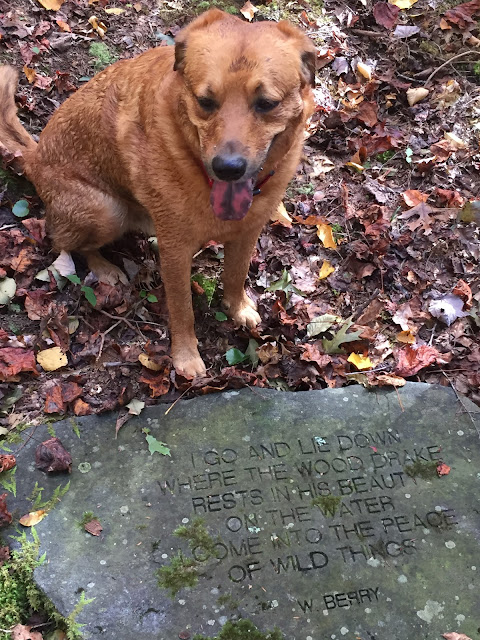 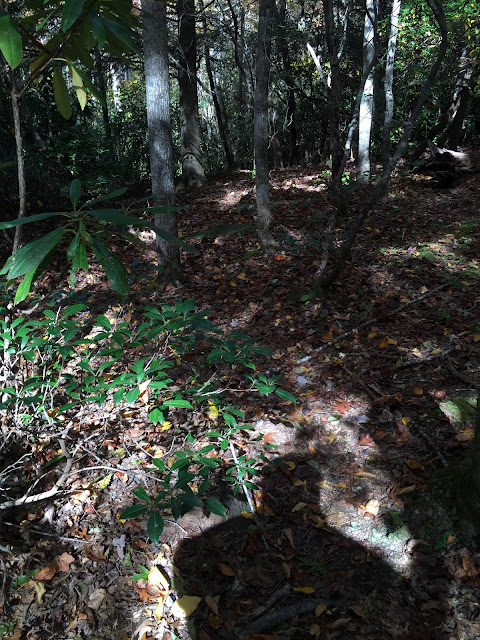 Unless you come across a fresh grave mounded rather eerily in the shape of the body beneath. Geeta told me the story of a young man who fell ill on a Thursday and was dead by Sunday. He left a young widow and much sadness and I stood there and saw his body outlined under the dirt. It was a very 19th century pioneer feeling. 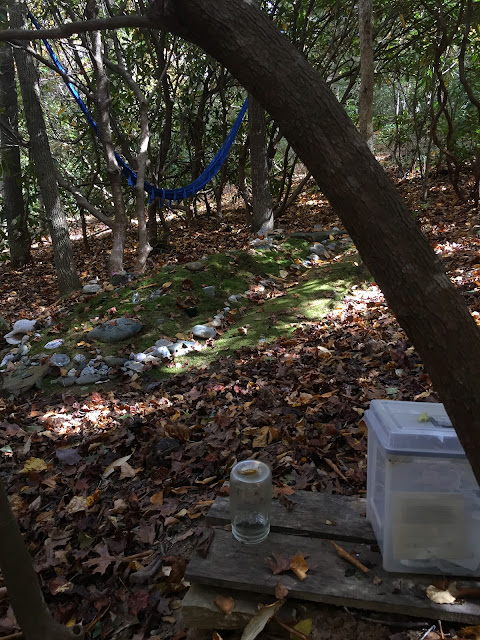 Three hours later we got back to the homestead built by Geeta's husband all those years ago: 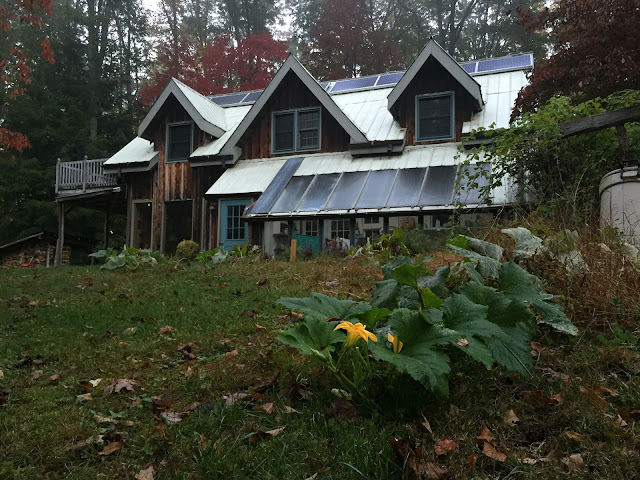