It must have something to recommend it as an art form if the French have bothered to name a style after it, but I like these kinds of eye fooling paintings for themselves, more generally murals of some sort but in this case just a tree, and very nicely done. 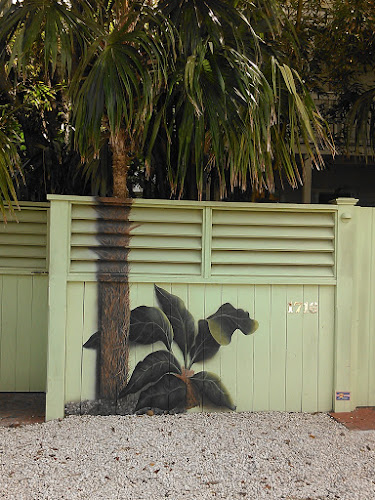 That one was good for a laugh somewhere as I recall in mid town, possibly on Seminary Street. I can't remember where I saw the tile shown below but it brought back memories for me of my first and only visit to the Roman city of Pompeii in southern Italy. 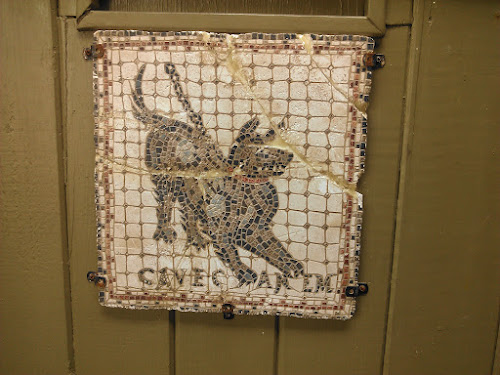 Cave Canem means beware of the dog in Latin so we can only assume the home where the mosaic was originally placed was in the habit of having dogs in it all the time, or perhaps they liked t use the rude to keep people away. Above the modern tile, below the original I photographed in the villa in Pompeii, unhappily partly obscured by a puddle. 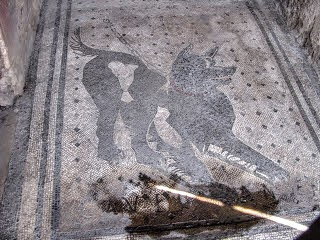 These are the perfect days of winter when Key West comes into it's own. Sunny blue skies light breezes low humidity and in short: perfect shirt sleeve weather. Perfect weather also to lounge on your porch if you have the time and the inclination: 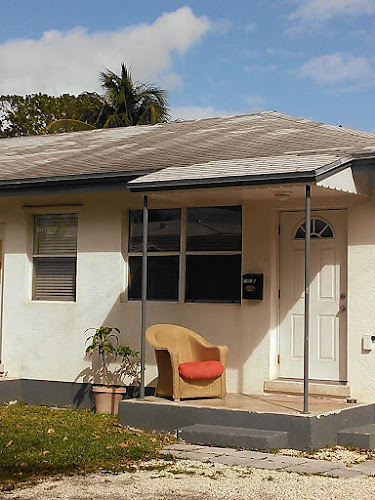 It's also the right time of year for me to notice the odd detail thrown out roadside. "Area 51” indeed. And perhaps they even believe the world will end in a week. Or perhaps they just have a really good sense of humor and like to cheer up their letter carrier. 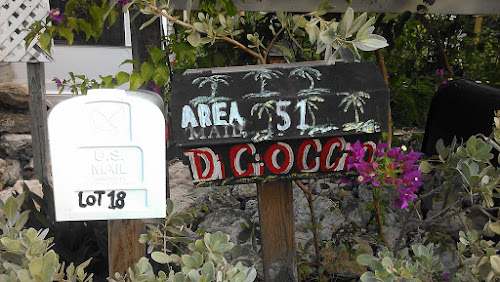 And here is the classic conch cottage though not in the typical old town setting. A white picket fence, a useful scooter ready to go; classic Key West. 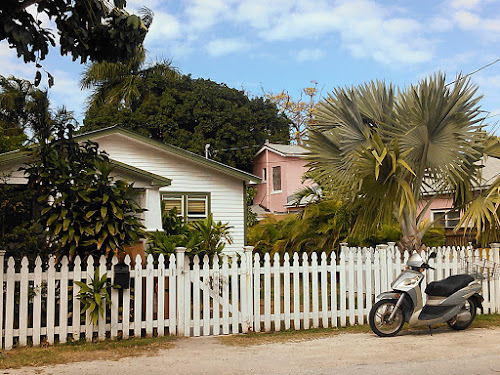 In Britain they call eighteen wheelers Heavy Goods Vehicles which ponderous term put me in mind of this Harley. 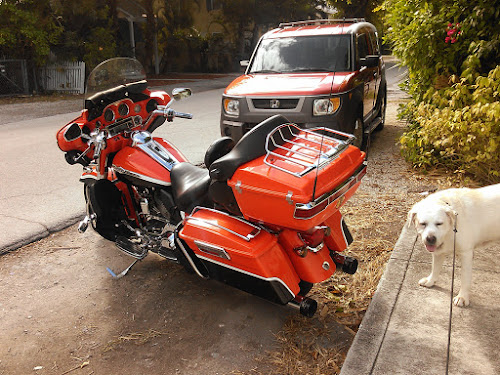 This mirror-free scooter rat bike with a taped up seat and a fair bit of rust is more typical of the useful two wheeled transport on this small island. 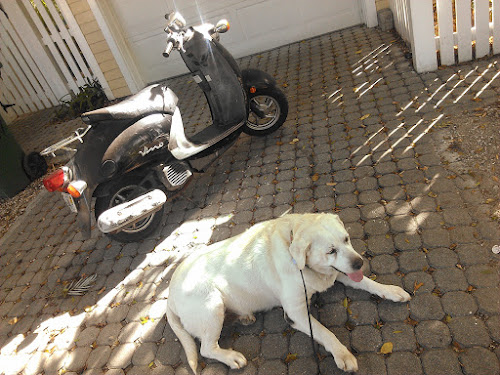 It was hot and muggy for Lbradors in heavy fur coats and the walk was thus shortened as herself was overheating, even as i enjoyed the weather. That's how hot the sun gets even in winter in frost free Key West. 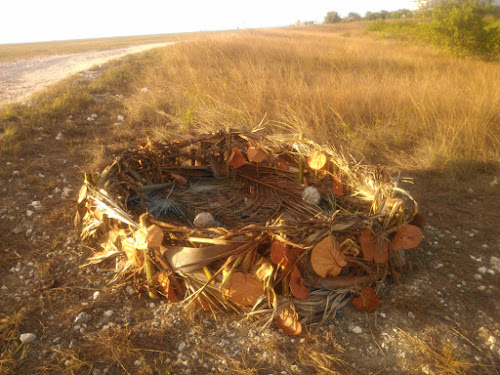 Key West is home to the civil war fort called Zachary Taylor, named for the eponymous president, and every year it hosts a shrinking art exhibit that is called Sculpture Key West which exhibits here and at the West Martello Tower where the garden club usually shows off plants. 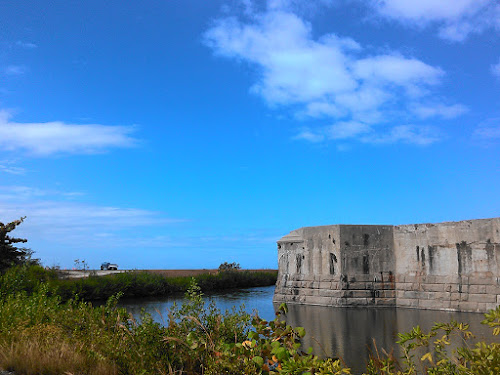 Ursula Clark of Brooklyn calls these nests of twigs and leaves Ancient Vessels. Which exhibit is the one closest to the fort and was my first hint that Sculpture Key West was back unannounced. 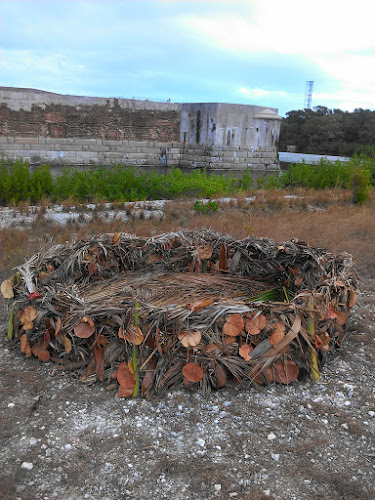 It took me two visits to get my pictures as the first time I innocently went for a walk at the fort clouds closed in all round and everything became gloomy and dark. Some bagged it and went back last weekend for a picnic with my wife and dog and that was when two dudes on unicycles floated by to some loud clapping and cheering in the parking lot. I had seen them peddling along the highway and now here they were, and my wife had even heard a story about some money raising thing they were doing. It was all a bit vague so naturally I went to check their website where I found this picture and not much information.

These brightly dressed dudes apparently ride to bridges around New York City, take a picture of their wheels and record a few statistics and take off again. According to the interview my wife heard the unicycles are a bitch to ride as they have no free wheels and no brakes and require particular balancing skills. You could just walk. 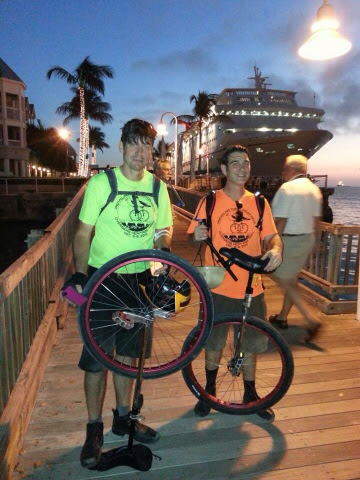 Anyway we watched them pedal in and ate pedal out and I suppose more than a hundred miles on one wheel is some sort of achievement and it is in some obscure way connected to the sculptures. Which, I have to say seem t be rather reduced in number and I thought, imagination this year, which is year four of the endless economic recession. 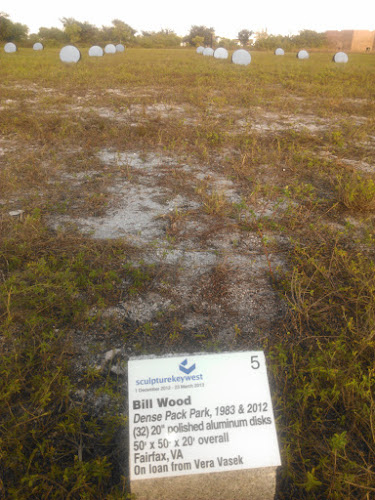 From a distance this display looked like a miniature telescopic array from Virginia, but the blue disks up close turned out not to be blue in color at all. 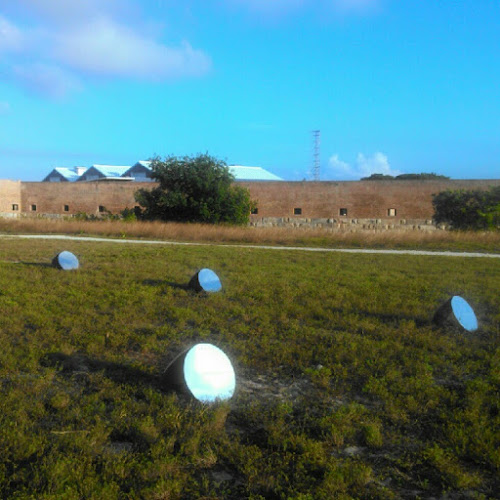 The just reflected whatever they saw, frequently blue sky, sometimes not. 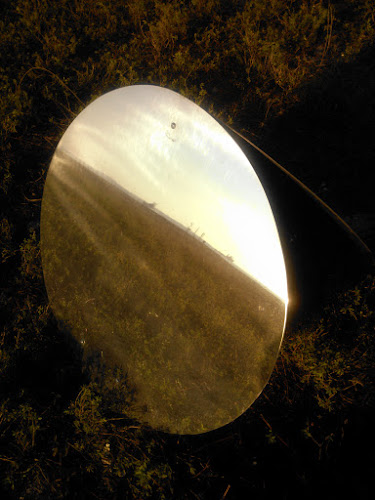 The not-actually-blue discs were next to another odd installation, called Down The Drain by Bonnie Rychlak of New York. 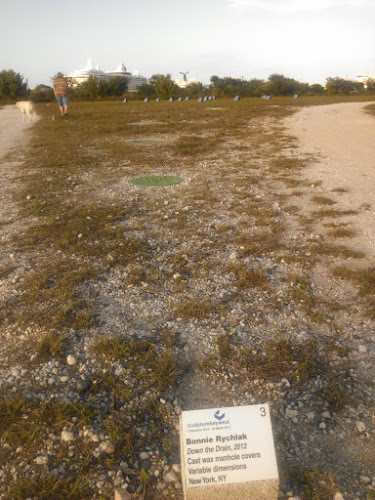 They are hot wax person hole covers apparently and visitors are sternly warned not to touch them. Which presumably means they aren't as tough as the real thing! 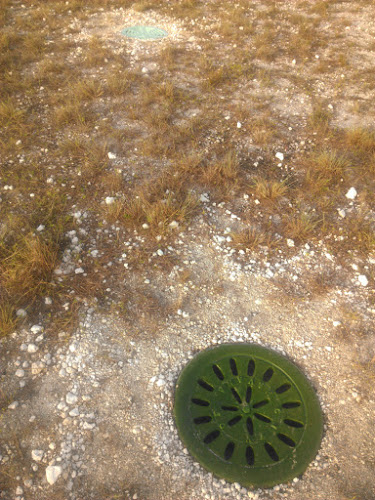 The great thing about Sculpture Key West is that it is in a lovely setting at the park. I wish all the exhibits were in one place especially now that there are far fewer than there used to be. It alsmotbseeme as though there were too many for Fort Zachary with sculptures spilling over rather attractively among the pine trees. 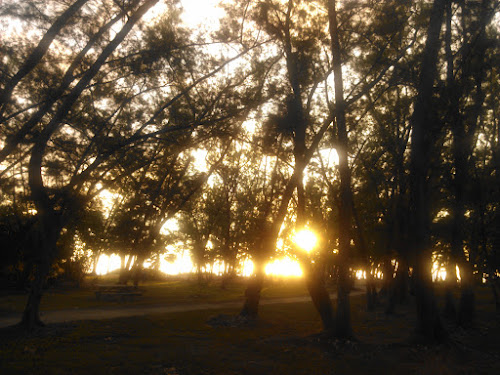 No more. We had a picnic among the pines but there were no sculptures there. There was one among the new native plants the park is growing. It's called Starfish by New York artist Thea Lanzisero. 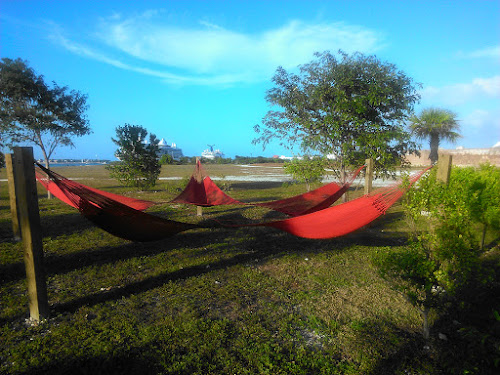 She has had stuff shown here previously, thought provoking sculptures including bamboo structures. Seen here working on one such from pictures in her blog. 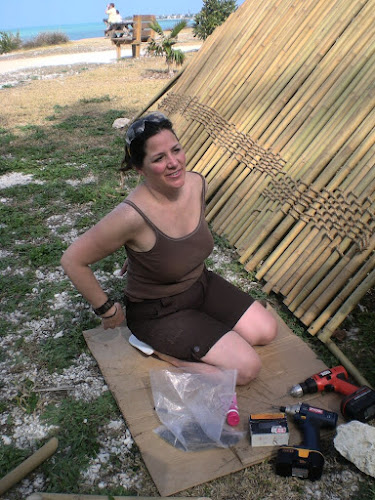 From the landward side of the exhibits we went seaward led by my Labrador. 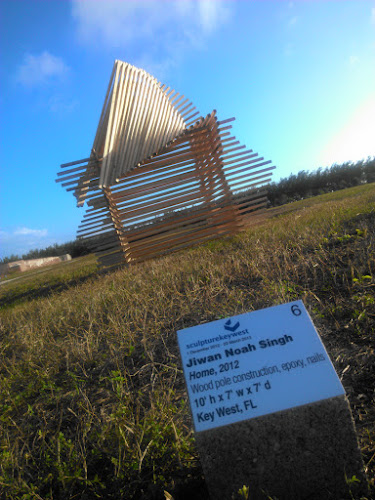 Noah's Dad built Truman Annex and it is the author of this wooden wavy structure after who, Noah Lane in the Annex is named. The wooden slats had the compound curves of something ship-like. 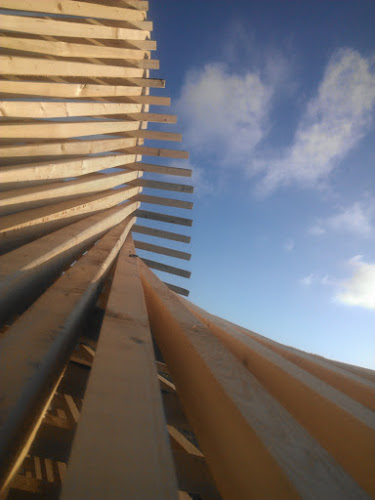 Below we see a flotilla of scrap water bottles planks and sticks aptly named Flotilla which seemed rather pretentious as in the a ground there was a flotilla of ships and boats of true dimensions that were in fact sailing around. 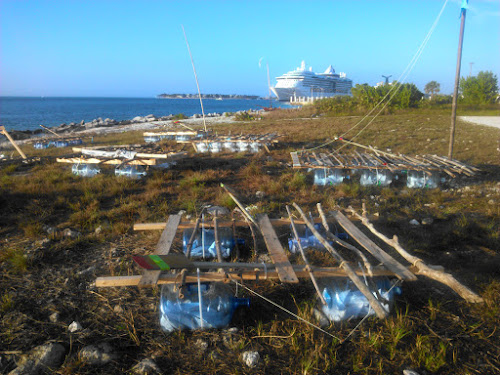 And in the old style of Sculpture Key West recycled iron made pretty. 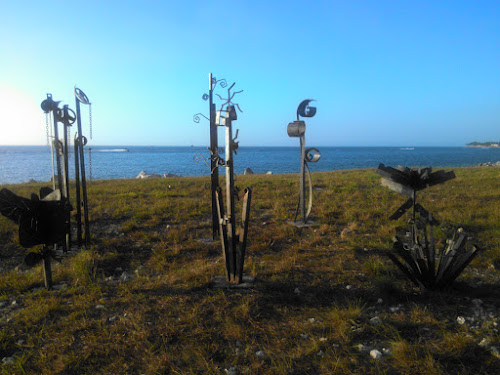 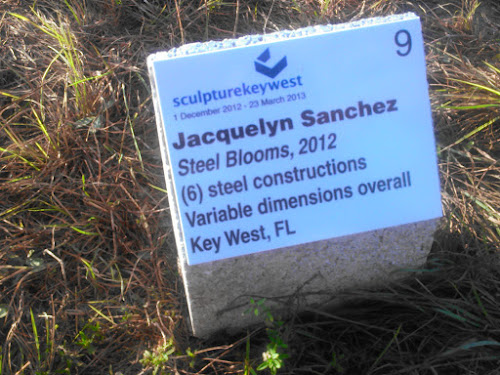 Heading back to the parking lot and a picnic dinner we passed one more sculpture, sheets of alumin bolted together painted yellow and bolted to the ground. 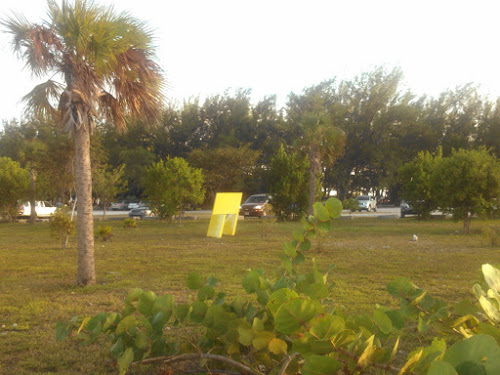 The greenery here was planted by the park in an effort to show what a wooded grove of native plants might look like in place of the non native invasive Australian pines currently flourishing on the point, in the background. People who have long enjoyed the shade of the pines protested so vehemently the state park service backed off from plans to destroy the pines, so while they remain, the blasted heath next door gets a much needed makeover to show what can be done with native plants. It seemed absurd to me to remove the shade giving pines even while the park has acres of useless ugly graveled open space. I'm glad to see their plantings are coming along. They will be lovely when they are giving proper shade, so I hope the parks service plants lots more. I think with Cheyenne leading the walk we may have missed one sculpture in a far off corner but we caught most of them and while she paused to catch her breath we pondered what we had seen. 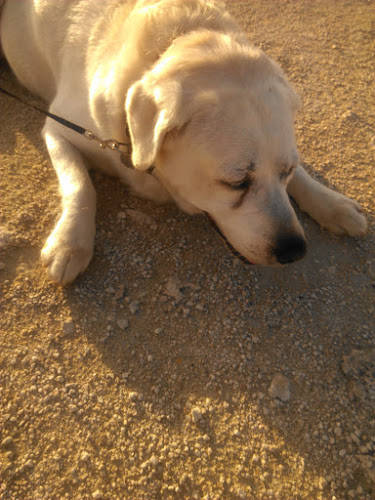 I miss the good old days of the credit fueled boom, when not just the field of finance was powered by cheap money, but artists got a chance to be funded and seen and argued over. I fear the future ay have us looking back at this period as The Good Old Days, so I left the field of sculptures determined to enjoy myself as much and as often as possible at Fort Zachary Taylor State Park.