Driving thirty minutes into town to walk Rusty after he woke me up I was listening to a photography podcast. It was a discussion about the debate between color and  black and white and while I found it interesting I was not aware that I had been immediately affected by it. 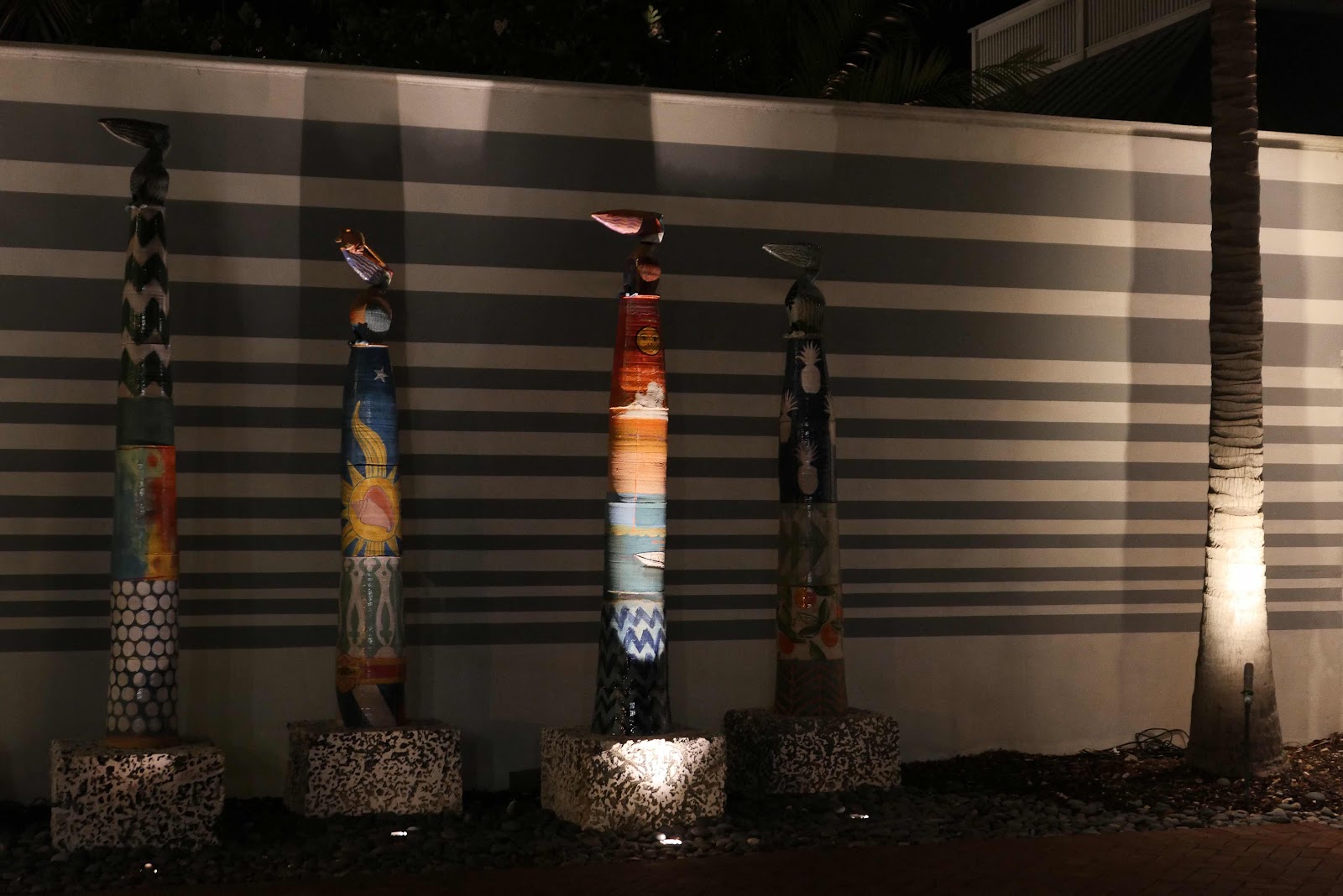 By the time I had walked from Caroline Street to Conch Republic Seafood I understood that I had internalized at least some of the discussion! I noticed a whole lot of color leaping out me in the dark. A city office on the docks painted the classic sky blue. 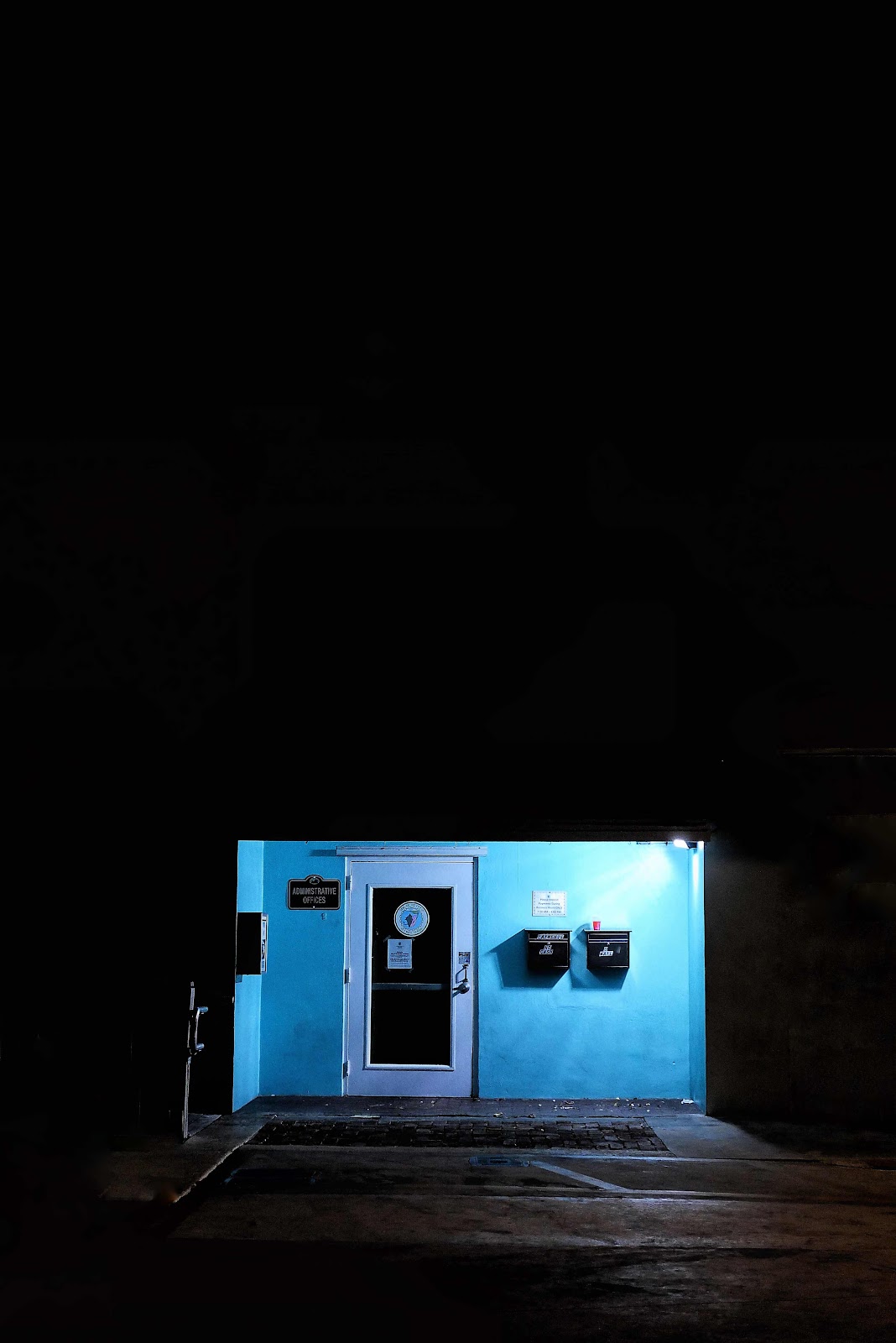 You'll see that color painted under a lot overhanging out door roofs. It is said the light blue color discourages bugs from settling. I have no idea if it's true but it looks pleasant enough. 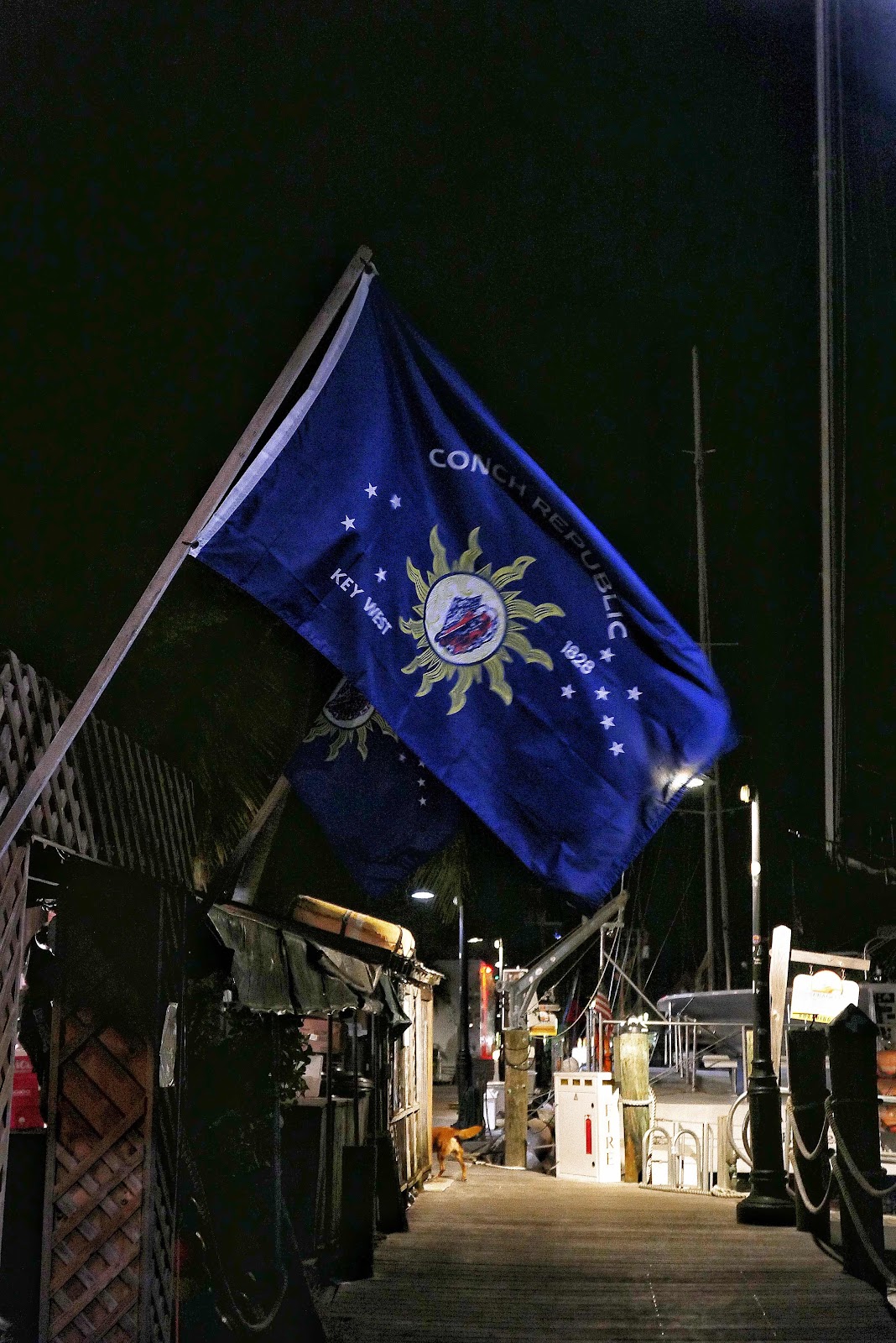 The joke in Florida goes something like this: how do you recognize a newcomer in the supermarket? That's the person looking self conscious when they buy cockroach poison. After a while alligators and palmetto bugs( the tourist brochure term for roaches) are a fact of life. 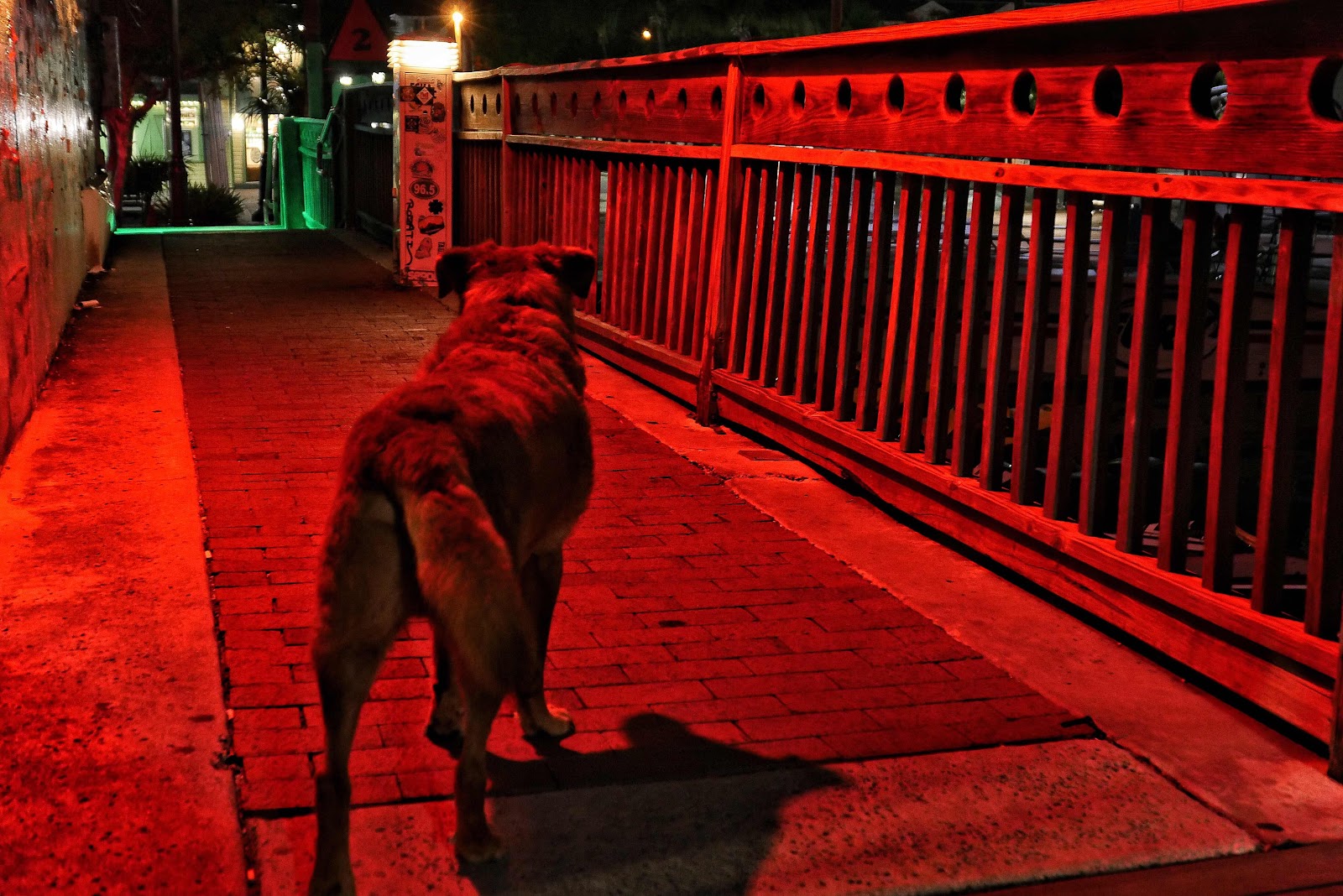 It used to be the Key West Bight was full of commercial fishing boats. Now there's one holdout among the pleasure craft in the "Historic Seaport" and its attached to Conch Republic Seafood, a popular tourist haunt. 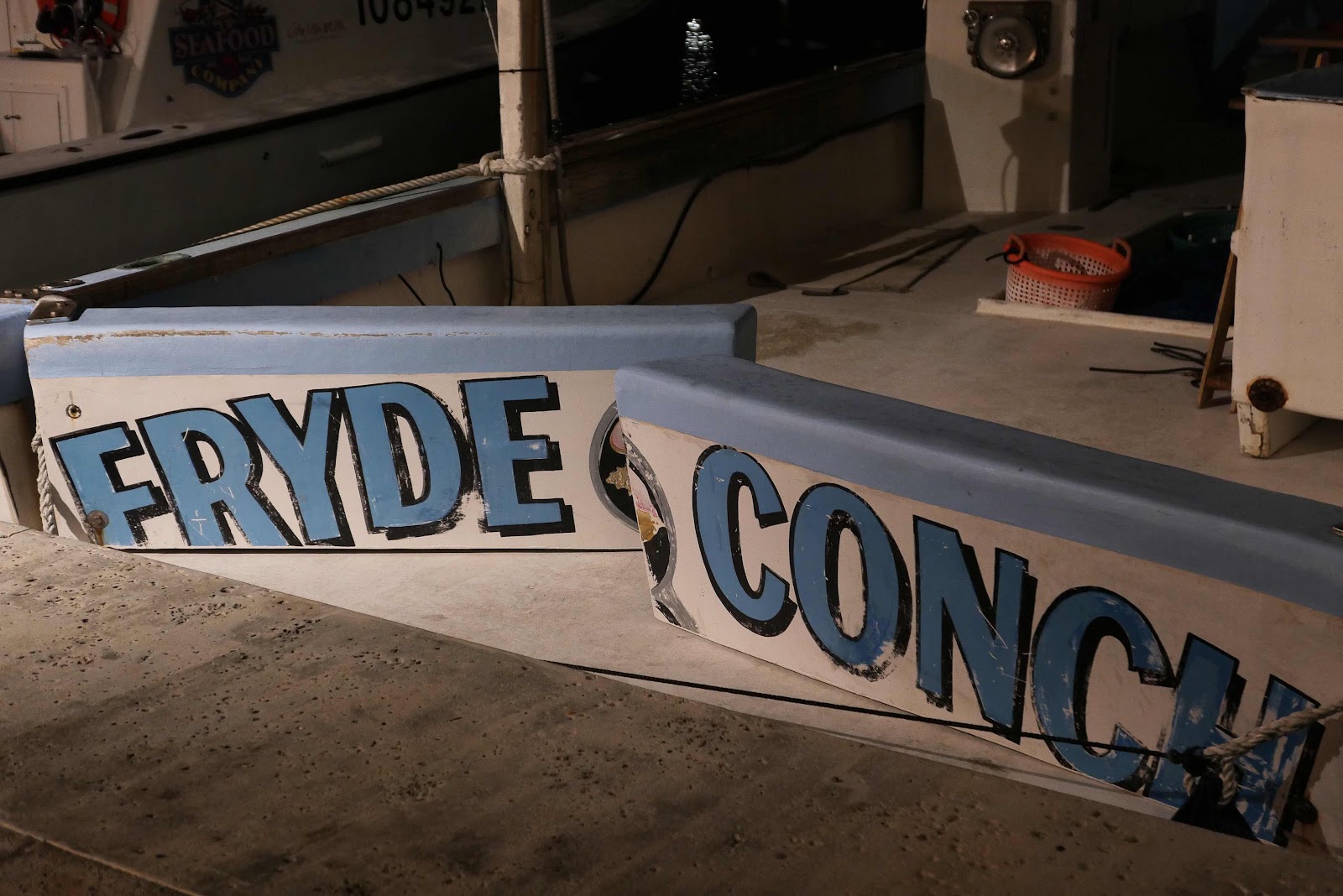 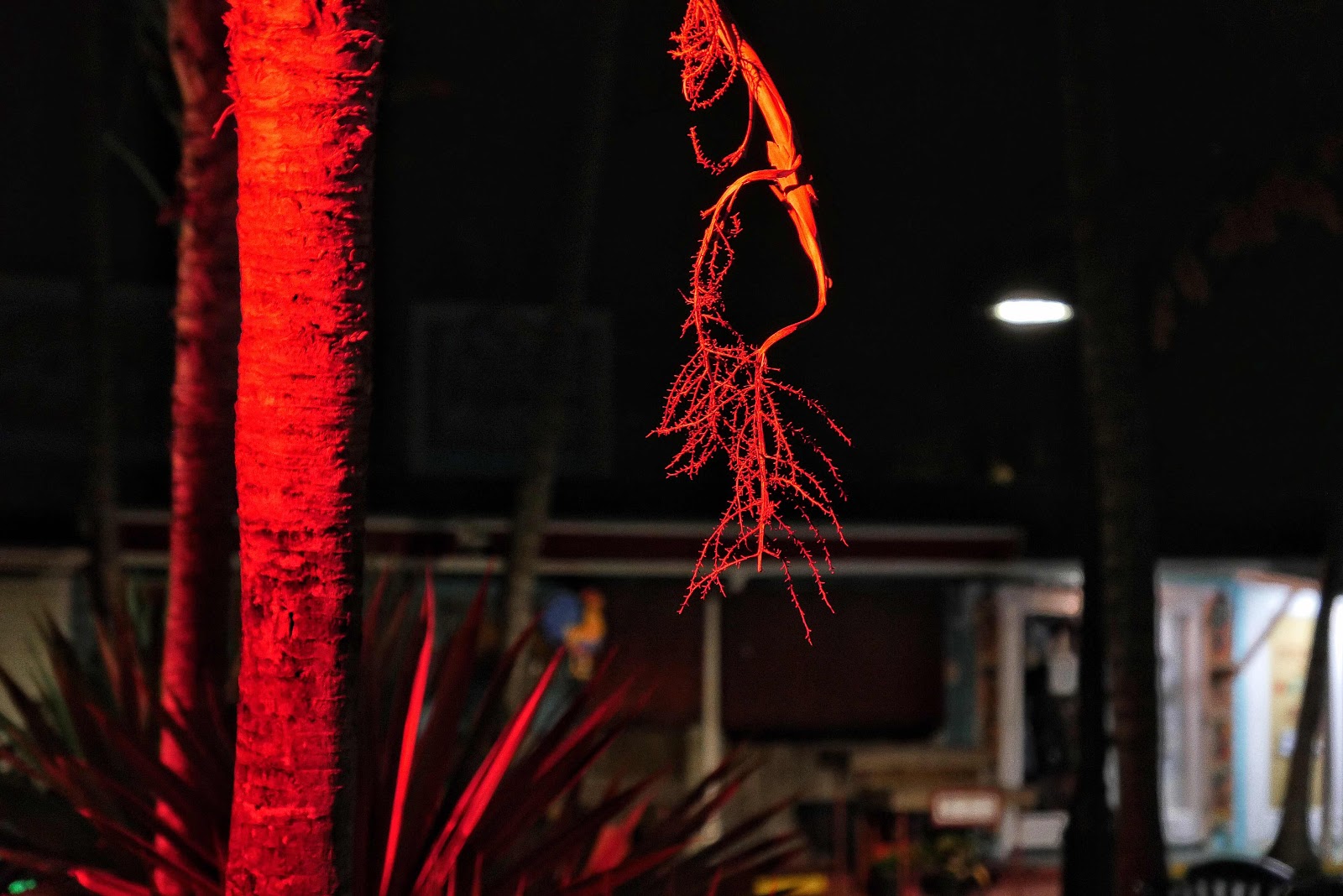 I've seen these charter boats below lined up but the green one on the end was new. So I thought it fit the theme that was developing my head, chasing colors. 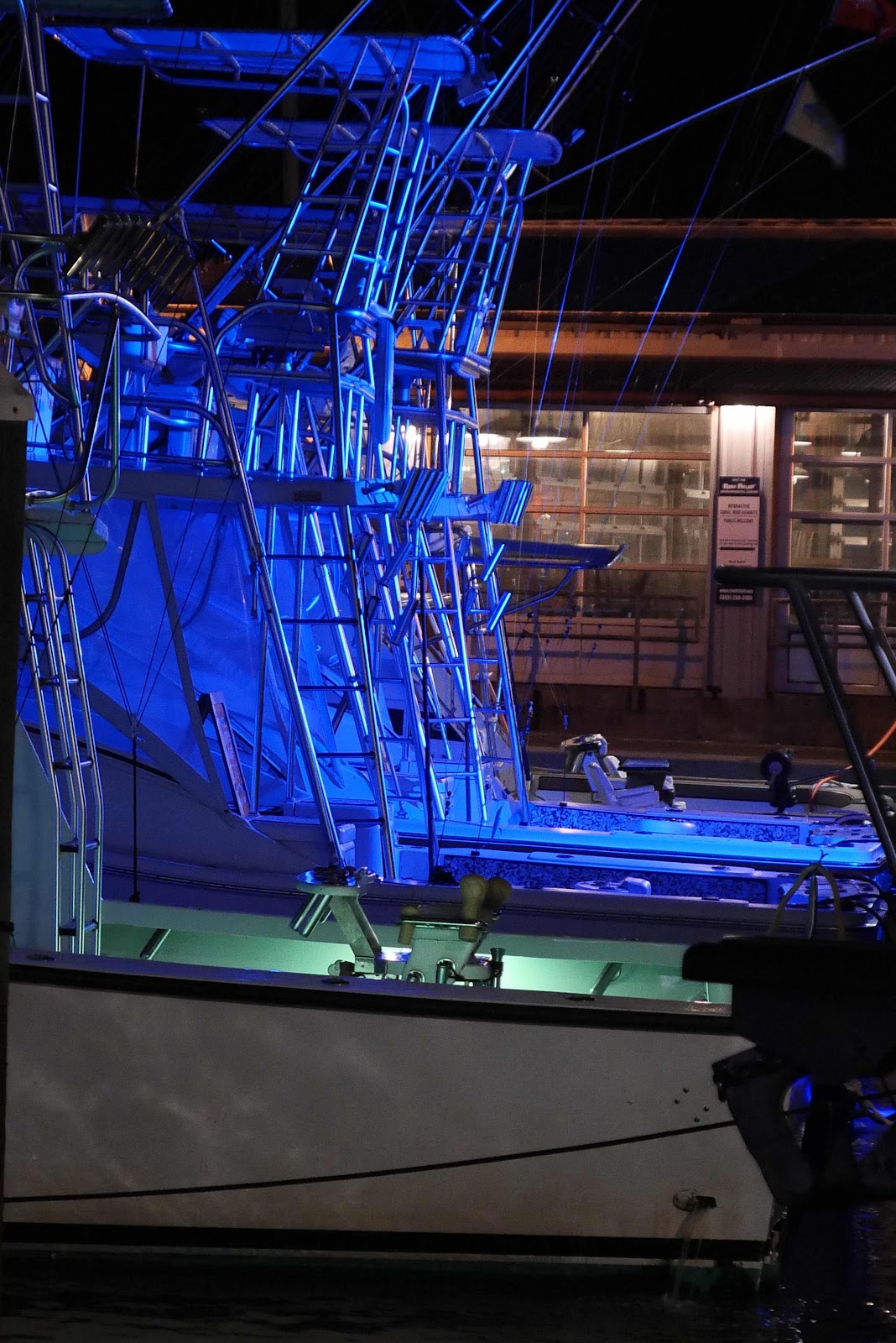 Colors are everywhere when you look. I used to wonder about this weird mood lighting and then my wife got some installed in the van. I think it makes the cabin look like a darkroom but she likes it and wouldn't you now it there's an app to control the exact color too.. 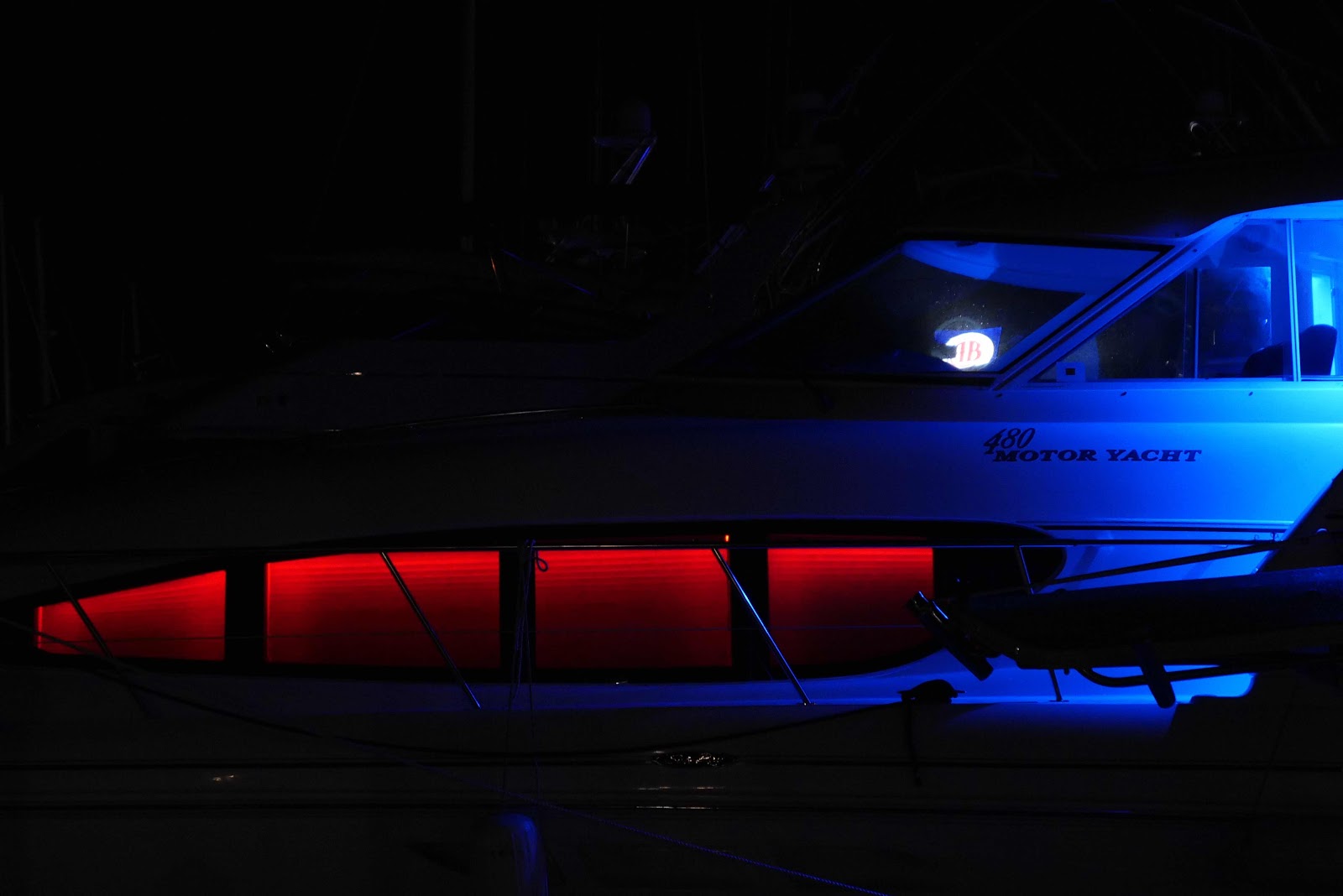 Wahlburger is a new restaurant on the waterfront where White Tarpon used to be before they moved to the Boathouse which is now at Turtle Kraals in the sort of musical chairs that often happens around here.  I've had their food and it was  fine which opinion seems to be seconded on Tripadvisor. 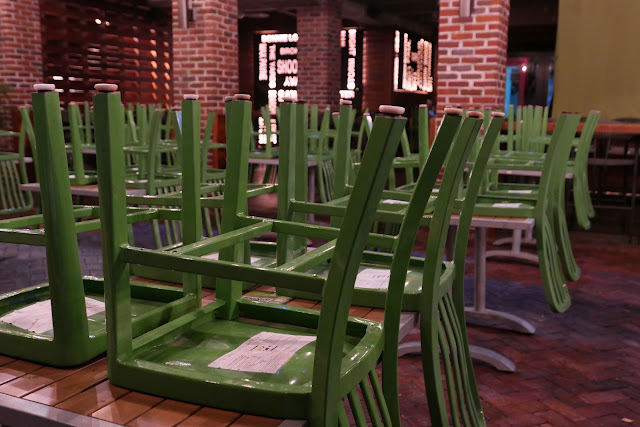 The odd thing to me is how actors who have had perfectly satisfactory careers with all fame and wealth accorded them want to get going on all these weird unrelated business ventures. Still I suppose it keeps family members employed and proves something to some one who needs affirmation but I know I wouldn't bother, as I've heard running a  restaurant is a high stress business. Still, there it is, a eat a burger here and rub shoulders at some considerable distance with Fame the all important ingredient in the world. 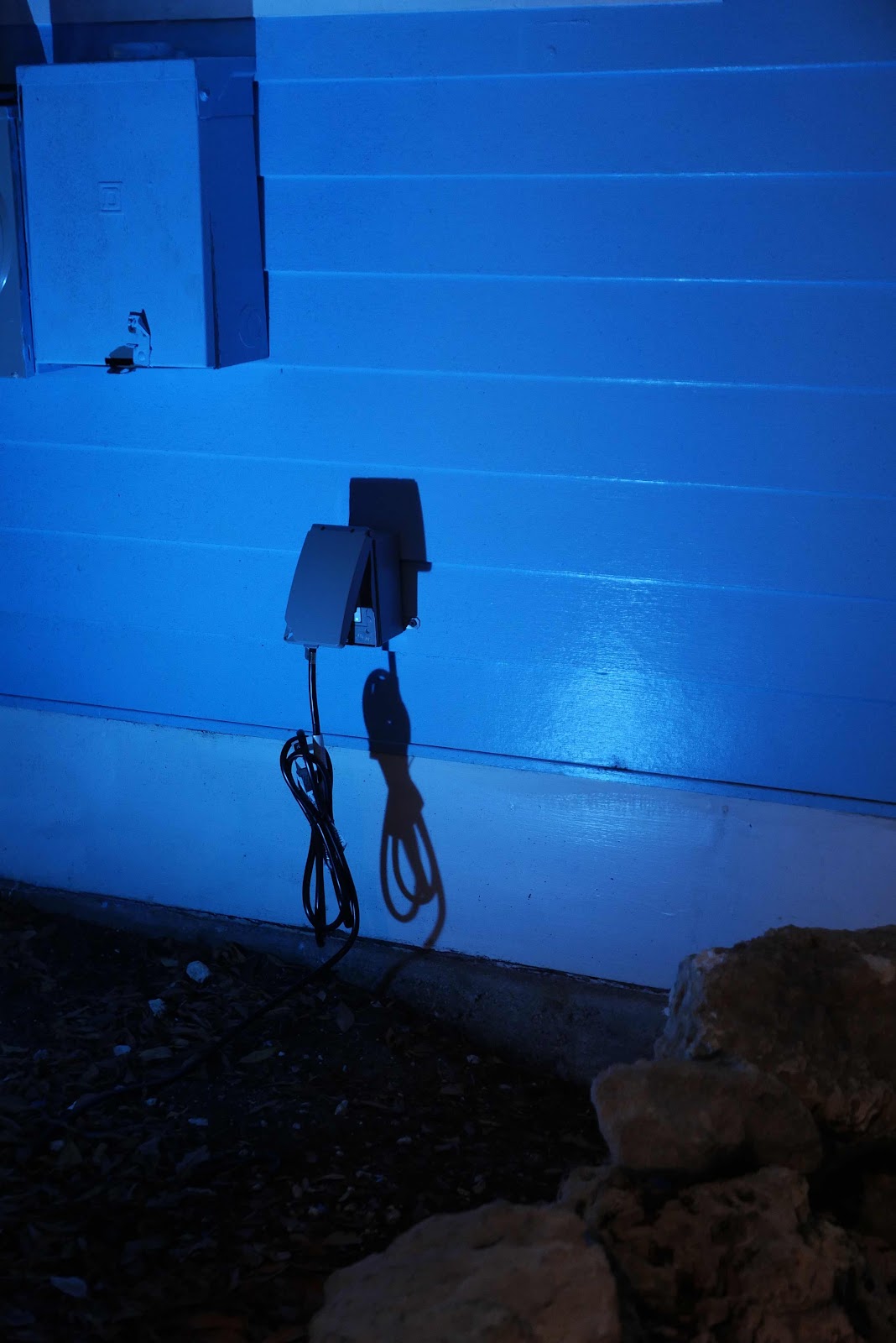 The other place that did that was the Rum Barrell owned by a doctor to the sports world who spent his fortune playing pirate themed restaurants in Key West. Then apparently he found it more satisfactory in St Augustine so he decamped forthwith and left some gaps in the restaurant scene which are being filled now the pandemic seems to be over. For now. Maybe. 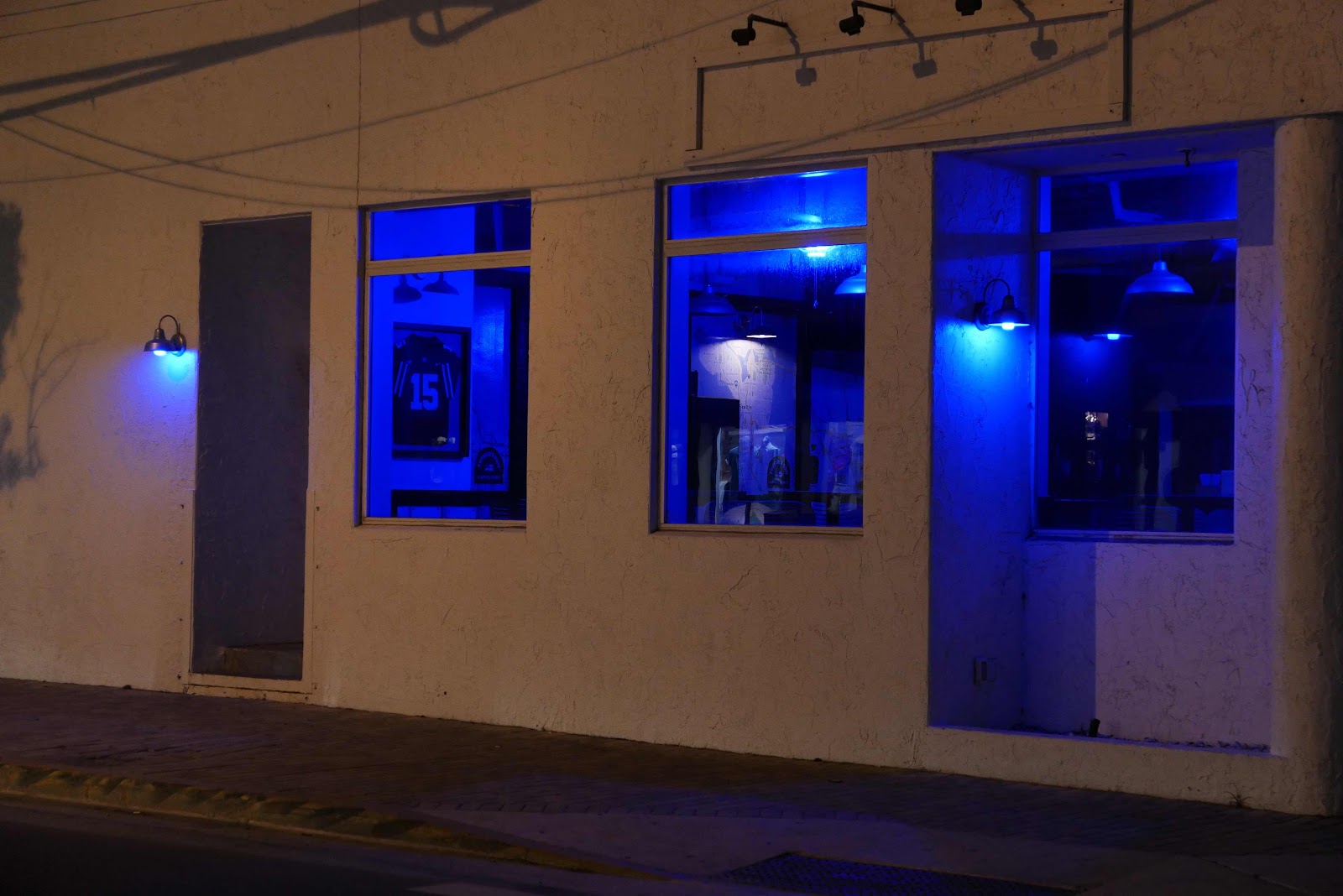 And as I ambled down Greene Street pas the moment of colors I saw Peppers of Key West has closed and become a coffee shop. I liked that place and my wife loved it as she likes spicy food. The virus seems to have a lot to answer for.
Posted by Conchscooter at 12:00 AM 5 comments: