Let me be quite clear: I was just sitting there minding my own business with my dog rolling in the grass nearby,  my book open on my iPhone, my camera set down next to me, and they came along. I wasn't listening to them but short of a Navy jet passing directly overhead I couldn't help but overhear them. Boy, they were worth listening to though, especially if you are sick and tired of being talked down to about the dangers of the virus and refusing to social distance yourself. 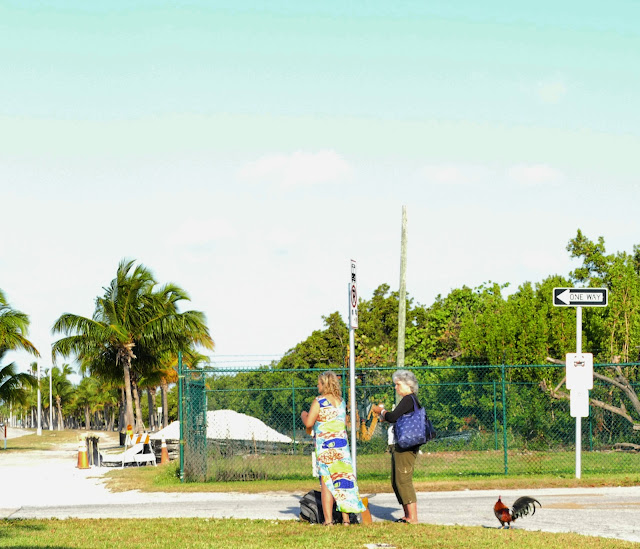 One starts off by saying, as they line up at the bus stop that she's thinking about joining her daughter in New York (please yes I'm thinking). Besides her friend said this panic is all excessive. 5,000 people die every year of the 'flu and this thing hasn't killed anything like that. (Bloody hell, I'm thinking, they really don't get it.) The conversation went on like that apparently endlessly, my toes curling, thinking about all the stuff going on around us, across the world, the people unknown to us dying and these two were annoyed they were being inconvenienced. One told the other to go to Canada, she could continue on anywhere from there. (Wow, I thought, Canada is closed as tight as the US is- you can't get there from here.) I loaded Rusty and the camera into the car and was about ready to load myself when another car pulled up and a woman popped her head out. 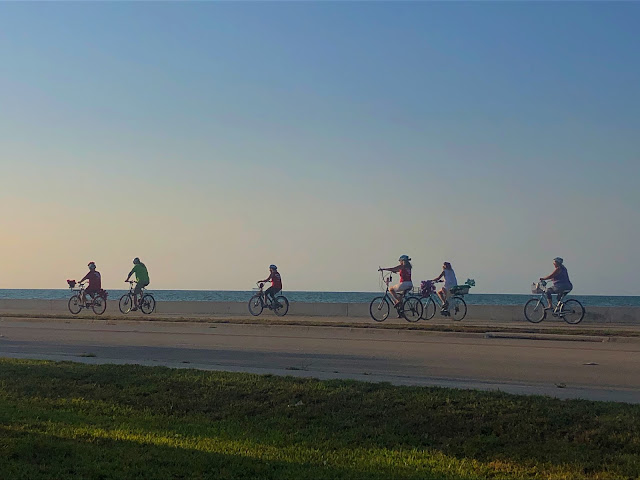 Is the Greyhound office open? she asked.  I guess I was feeling a bit pissed off because I wanted to say do I look like a coronavirus information center? But I said yes, it sure looks open doesn't it? I think Beni Hana is open up the street too if you need lunch. She looked a bit taken aback at my sarcasm. I was about to snap at her get out of the car walk across the lot and read  the paper taped to the door. I bit my tongue and got in the car. She waited for me to leave before she did just that. I'd have checked Google before asking a stranger about something of which he knew nothing. Leave me isolated please and figure stuff out by paying attention. 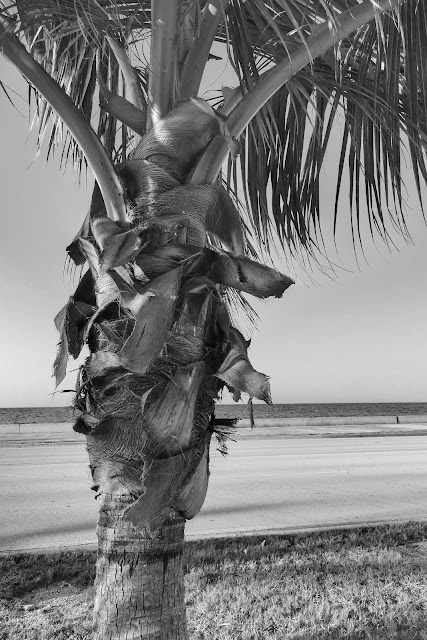 I have to say the area in front of the airport and around Pines Park and the old Boys and Girls Club looks bizarre. It is packed with rental cars in storage, all makes and models and colors waiting for tourists to return to the Keys. I'm guessing there will be some astonishing deals to drive them back to the mainland if the pandemic ever moves on. It really does start to resemble a zombie apocalypse some days in some small ways. 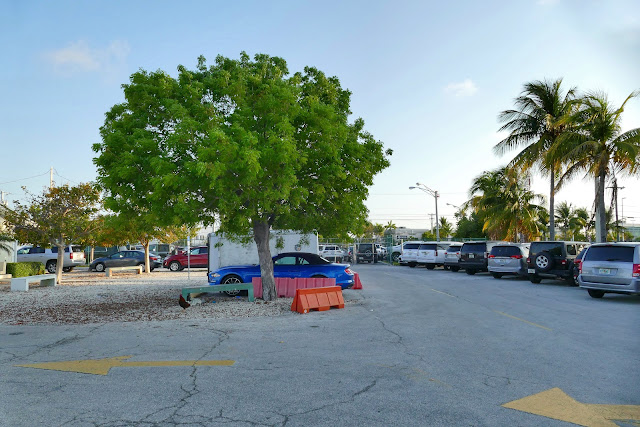 I drove round Dead Man's Curve (where people used to drive or ride off South Roosevelt and die before they built up the corner with signs and barriers) and doubled back on Flagler driving into Key Plaza (not Keys Plaza please) and wandered in to Publix, the one known to people in Key West as the new Publix, as opposed to the old one up the road at Searstown. In the general panic of reassuring themselves by overdosing on shopping people seemed to scatter all the carts thus our local supermarkets were having trouble stocking the damned  carts. The kind lady out there sanitizing them told me they brought in a hundred extra. I believe it: never seen the lobby so full of carts! 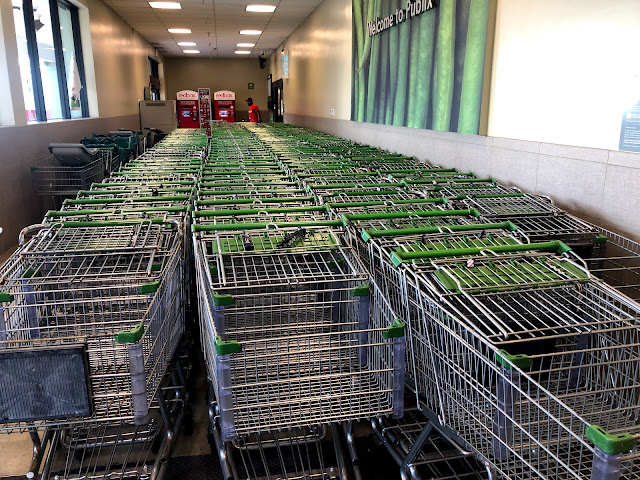 Dried beans were in short supply as was branded milk and a lot of meats but things were very quiet with all the dreaded Spring Breakers gone, and with them their money...Toilet paper is apparently the first thing people buy but there were some paper towels on the shelves. The latest issue I've heard about is how the macerators in our new sewage system are being asked to chew up all sorts of towels, paper and sanitizing towels and other substitutes for missing toilet paper. I see a sewage problem looming. Great stuff isn't it? Unintended consequences. Luckily we bought some bog roll a couple of weeks ago on our last trip to Miami so we are set, which makes watching the great Bog Roll Disappearing Magic Act look pretty funny from our thrones. 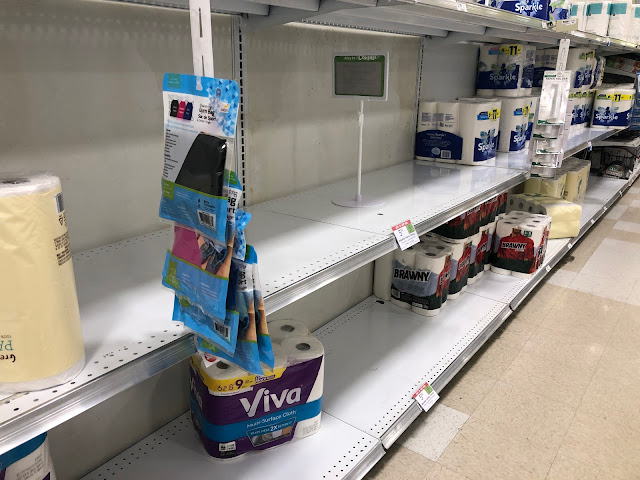 Aside from all the coronavirus madness, Rusty and I did walk around Old Town a bit and I got some of my pre-pandemic black and white pictures taken to make me feel more like old times. 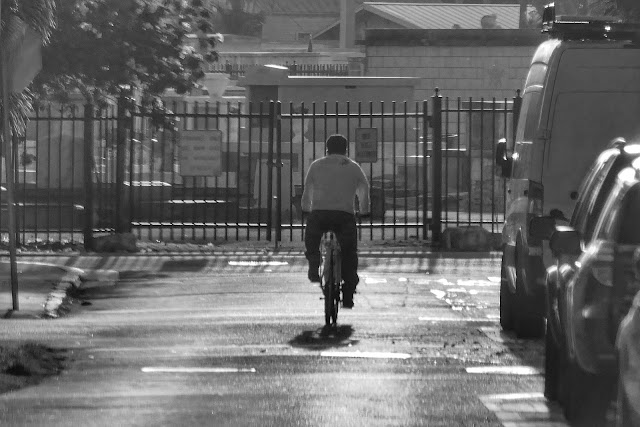 I love having the time to peer down empty alleyways and lanes, but I am not a huge fan of putting people in the pictures anyway. 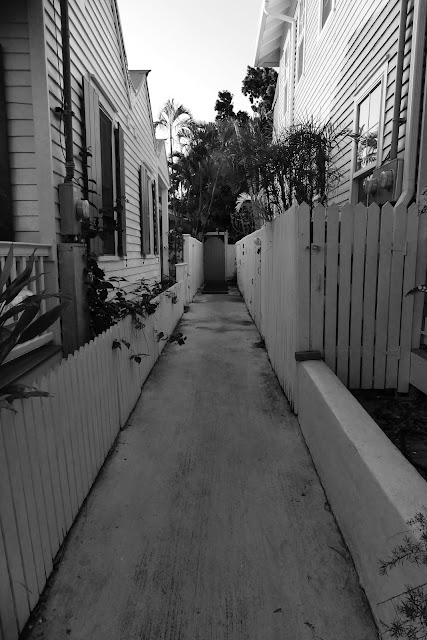 I'm finding it hard to find quirk on the streets of Key West, gentrification doesn't hold hands very well with nonconformity and weirdness so I have to hunt around for colors and shapes and public artwork where I can. 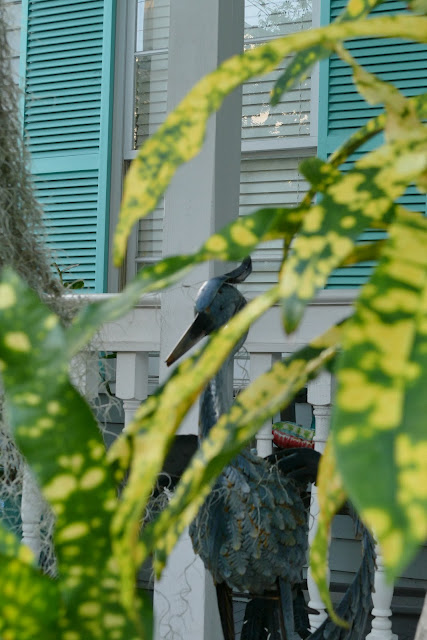 At the end of the vacation I have I admit it, been getting up late and enjoying the morning sunrise on the buildings, lots of shadows and shapes on the houses. 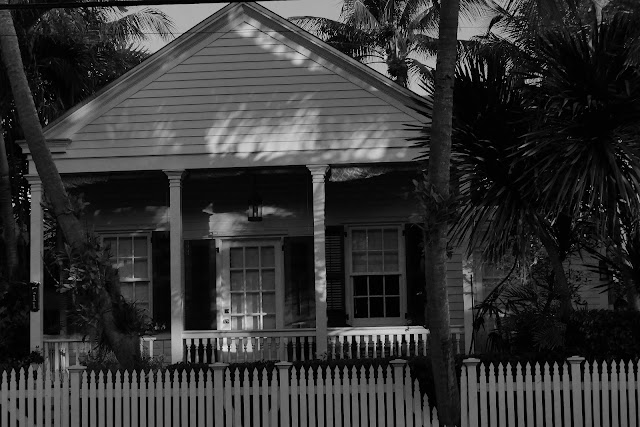 Southard Street at 8:30 yesterday morning, a few cars a few bicycles a few scooters but not much. 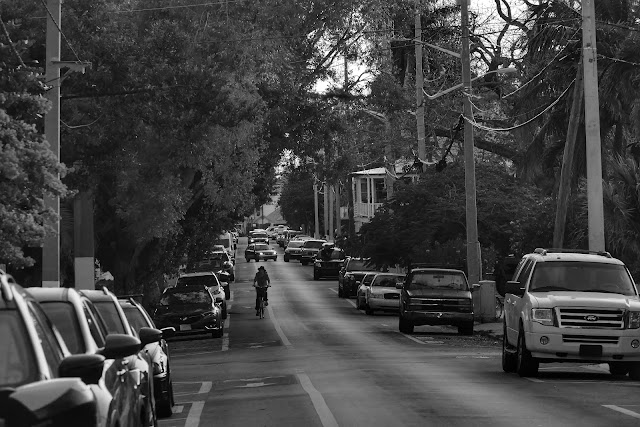 Pleasant enough for now but how this ends who knows? I'm very glad my wife and I are working.
Posted by Conchscooter at 12:00 AM 6 comments: