Care & Feeding Of An Old Vespa

Sometimes in life you just have to get on with it and I confess the prospect of not being able to ride for any length of time even at 45 miles per hour has made me rather leery of the idea of regular commuting on the newly re-powered P200E. However, living where I do there is no alternative so I have planned out a few general tactics to avoid getting mown down in the 45 and 55 mile per hour sections of Highway One between my home and the shops, and my home and my work. Apparently I did well, as I made it to work intact: 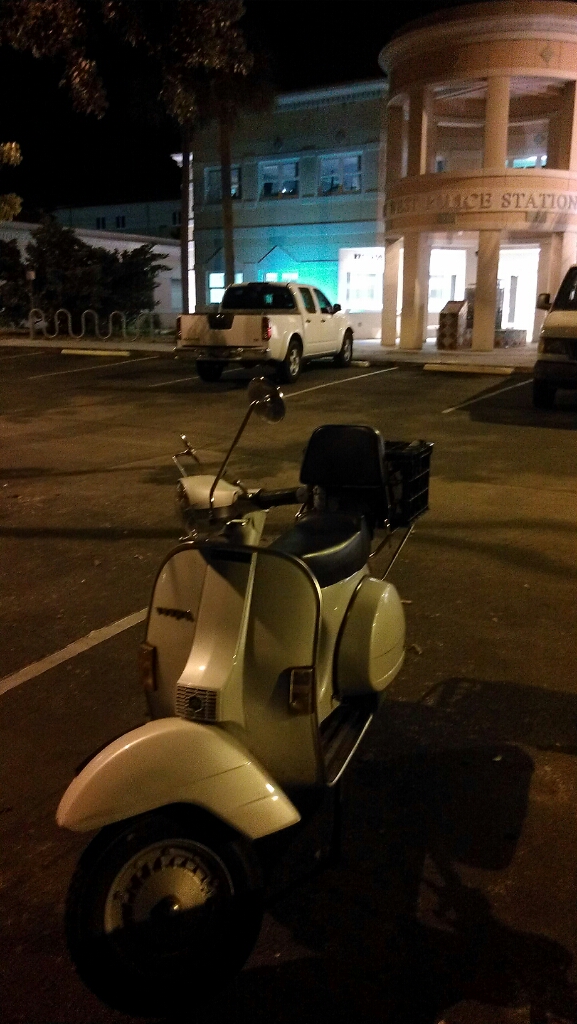 The main Vespa fuel tank holds one and a half US gallons of fuel (6 liters) roughly which should be good for 90 miles (150 kilometers) before reserve, which is half a gallon, or 2 liters, providing one hopes another 30 miles range before dying completely for lack of fuel. My plan is to keep fuel at home, ready mixed with oil so I can fill the Vespa without having to fiddle around at gas stations. This is more important now during break in as I am supposed to use ethanol-free gas for this tedious period of operation. American Vespas came with a plastic gas cap and a separate oil tank with its own pump measuring oil flow to the engine. My European spec scooter has a single tank with the original screw down gas cap. All fuel goes in here with 2 percent two stroke oil. Hmm... 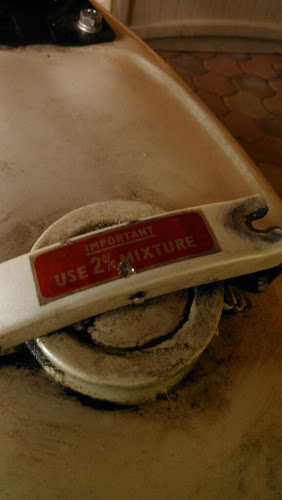 Mixing gasoline and oil is an arcane subject not much known these days when four stroke engines rule and the few two strokes around have separate oil tanks. I have found the trick for filling up at the pumps is to add oil for one gallon first, two and a half ounces, then buy the fuel in the usual way and add oil for anything more than a gallon of fuel. This mixes the oil with the gasoline and makes it easier (for me to calculate) how much oil to add. Too little oil will be fatal to the engine which needs the lubrication, too much oil will foul the spark plug and make it run rough...a knife edge! The man who rebuilt the engine wants me to use a particular oil and I have put a few ounces in the smaller bottle to carry on the scooter in case I am caught short and need to get more gas on the road. With this scooter if you have no oil you can use no gas... 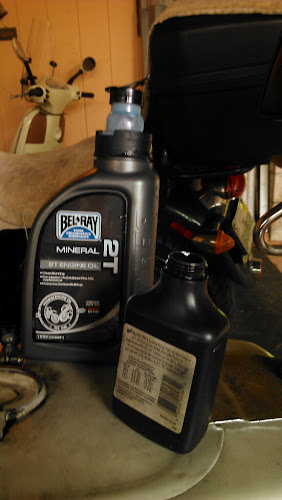 In case I suffer a brain fart at the gas station I have written up a table of tenths of a gallon of fuel and the proper oil ratio in fractions of an ounce. If I add 0.4 gallons of fuel I add one ounce of oil. Easy, especially as it's taped under the seat. 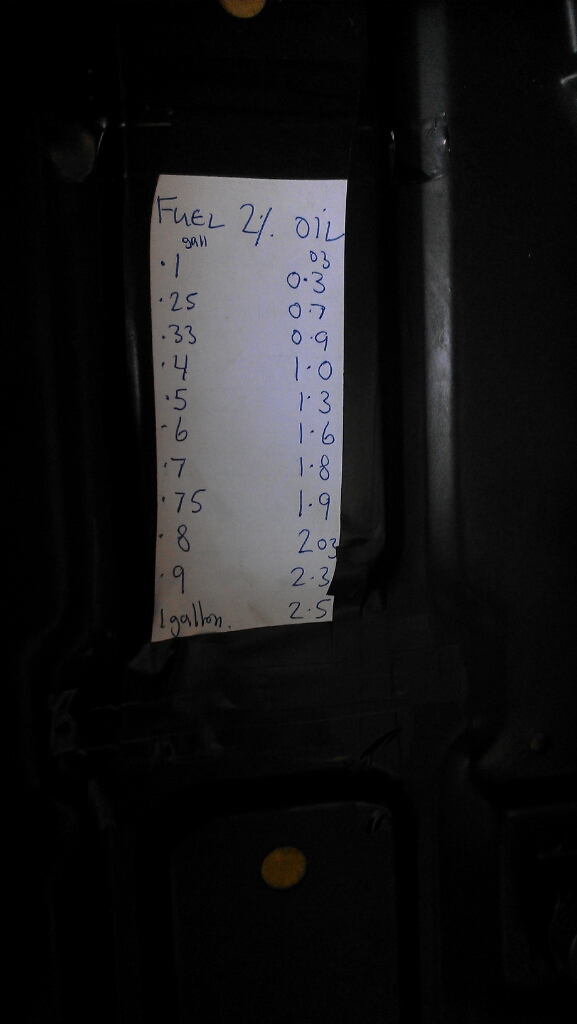 My wife sacrificed one of her measuring cups to keep me happy. 2.5 ounces is in the cup when the oil covers the top part of the white label. One measuring cup to one gallon of fuel. Fractions of an ounce of oil are harder to measure. So there it is. If you find me at a gas station with the lid of the tank open and the seat up with me studying the entrails you will know what I am doing. 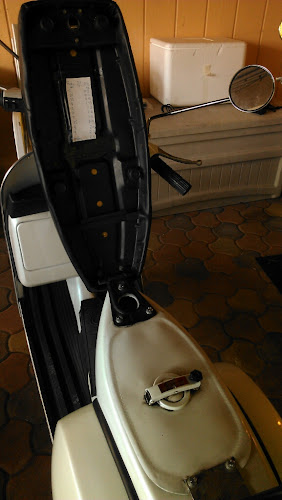 Something like this, below, except this was Roberto Patrignani crossing Afghanistan with his Vespa on his way to the Tokyo Olympic Games in 1964 from his home in Milan. I think he was supposed to be studying a map in this picture. Vespas are hardy machines. 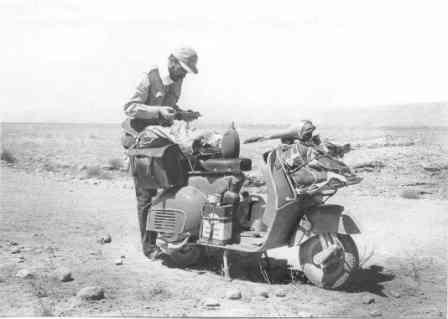 One other mystery of classic Vespas is how they shift. The idea behind the original design was to enable people to ride without damaging their footwear as happens with motorcycle foot shifters, so the gearbox is operated using the left hand side of the handlebars. The clutch is the lever (usually the rear brake on modern automatic scooters) and the grip itself is twisted to shift gears. Originally Piaggio wanted to build a 98cc four stroke automatic Vespa but the prototype Paperino was going to be too expensive to build as the originally envisioned cheap transportation so the company fell back on the tired and tested gearbox with a two stroke motor. 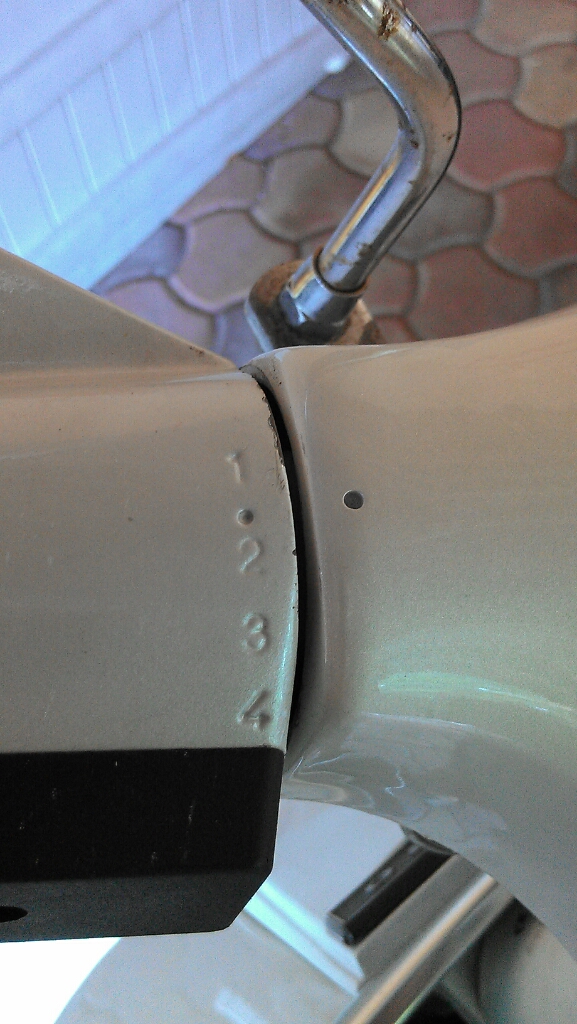 The mysterious shifter is a tube inside the handlebar grip and is connected to two cables. On the original 1948 Vespa the factory used tubular handlebars with rods instead of cables for shifting. In the photo below you can see the left handlebar ends in a grooved ring with a cable running through it. One cable pulls in one direction (change up) and the other pulls in the opposite direction (change down) as you twist the grip. And there is a box under the engine where the cables end up. Its called the selector box as it selects the gears. Outside it looks like this: 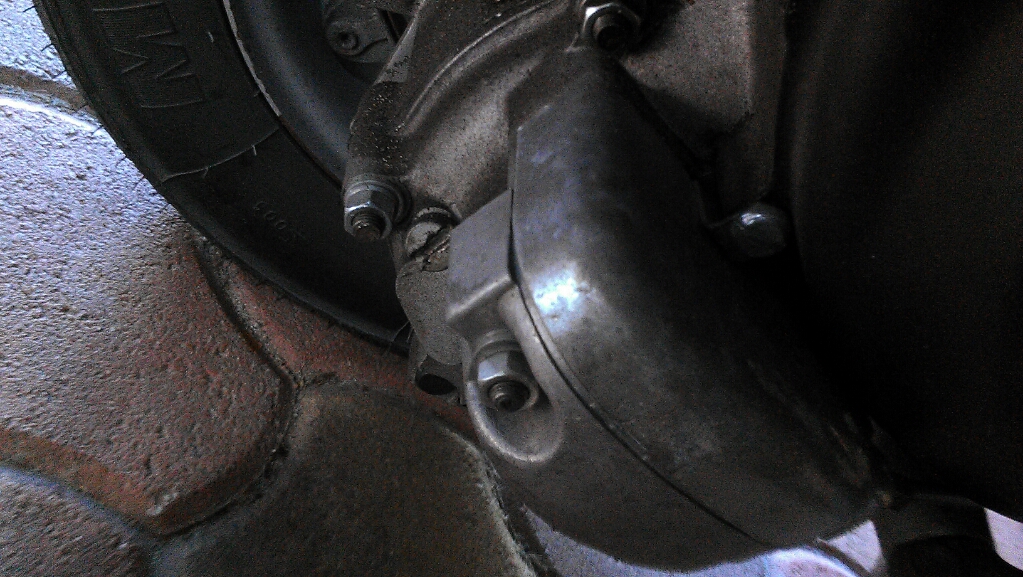 Inside it looks like this where the cables from the handlebar shifter end up: 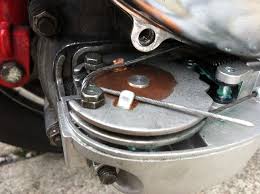 The hardest part is keeping the cables properly tensioned and I have been testing the clutch cable to get the simplest possible shifting action at the handlebar.

The only other regular maintenance worth speaking of is changing the gearbox oil every couple of thousand miles. About 8 ounces of 30W non detergent oil, available at auto stores hardware stores, even the supermarket I've found as it is dirt cheap and designed for gearboxes like this. All you do is drain the oil from the lower plug:

Then add oil through the hole left by removing the upper screw, until the oil flows back out. Zip it up and that's done. Other than that replace tires which is easy as the wheels are on split rims and no tire irons are needed. There are no belts, filters, variators, weights or electric fuel pumps to replace here.

Thanks to Vancouver Scootering for the last three pictures. A good resource page for scooter stuff north of the border. 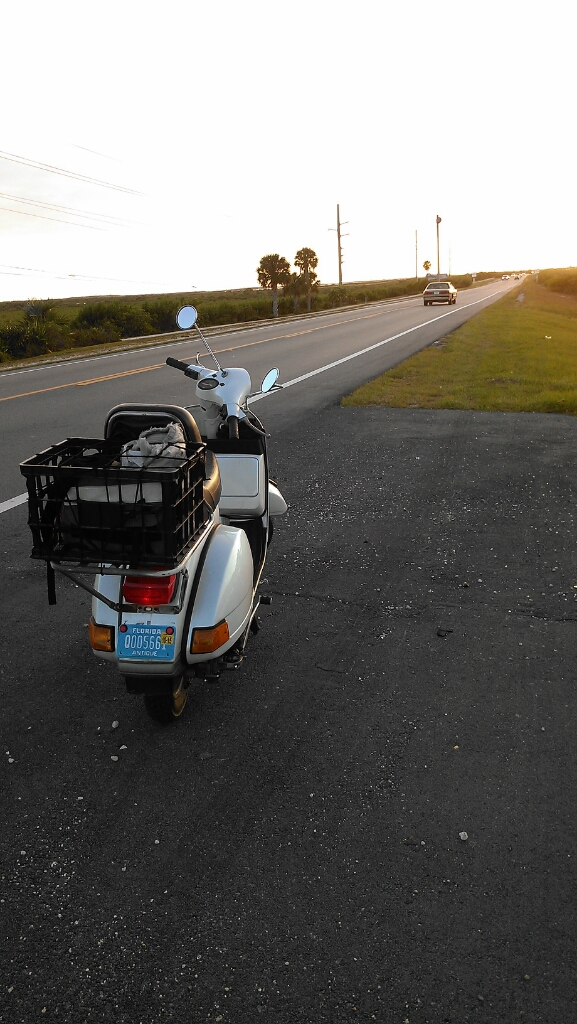 The running in period is supposed to last 600 miles or a thousand kilometers, the longer the better according to Gene my guru. It is tedious though putzing along like I'm riding a moped. I keep varying the speed on the throttle, occasionally pushing up around 45, then back down and pulling over for cars who deserve to go 55 in a 55, though not many of them seem to go even that fast. I hope the running in will be done by the end of the month and then I hope to keep up with them comfortably. I have to say the faster this scooter goes the smoother the ride. Above 40 miles per hour, in the short bursts I have done it positively purrs along. I am smiling all the way to work.