Van and Philip made early reservations at Garcia's a sixty year old tradition on the Miami River.It's atmospheric but is the food any good? Big question that... 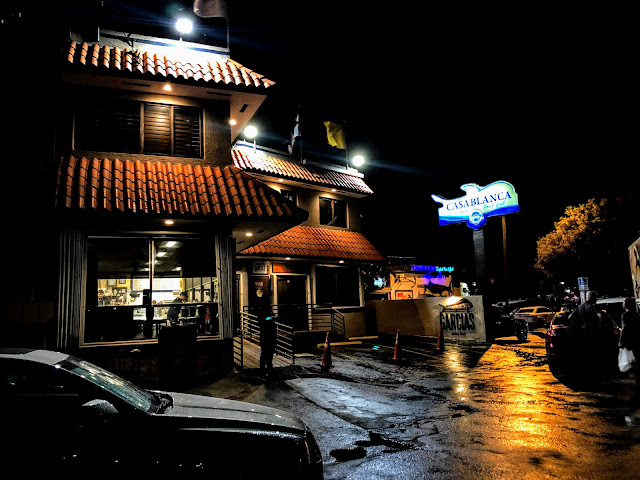 First of ll you can walk your dog through the hall to the back deck if you want. At first we left Rusty in the car but my eagle eyed wife spotted a dog water bowl among the tables so she went out to get him and walk him in. One point for Garcia's right there. 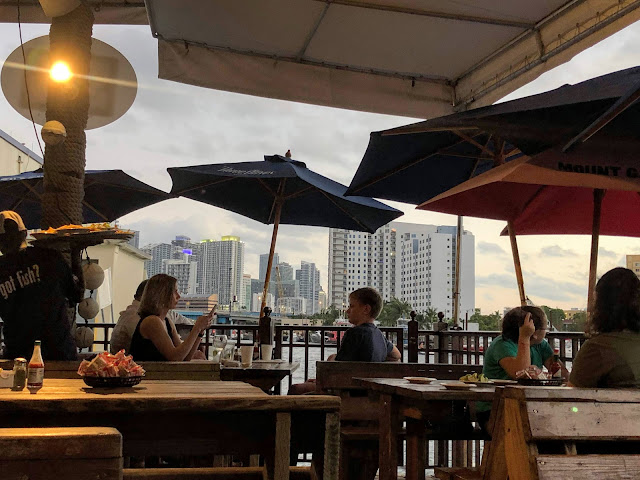 Let's be honest, the view is wild. Down the river you can see what Philip calls Manhattan South, a city threatened by sea level rise and intensifying hurricane seasons, but a  city that doesn't give a shit. And in that crude brash way that Miami has, it tells the world it doesn't care by throwing up mile upon mile of high rises. There are cranes out there pushing more columns of metal and cement into the sky even as you read this. Miami Beach is actively pumping the ocean out of its streets at high tide but metro Miami is growing relentlessly. 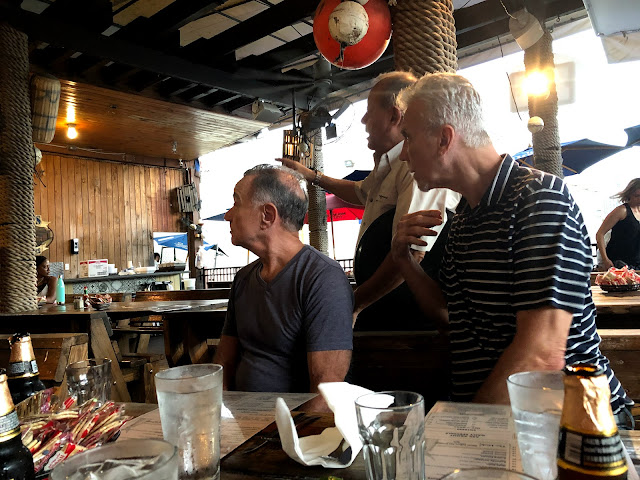 Philip (white hair on the right) told us of friends they have, because he and Van are unnaturally sociable...anyway this friend is renting a loft in Little Haiti for $2700 a month and lucky to get it. Gentrification is sweeping Miami as retiring New Yorkers have apparently discovered Florida's amazing tax benefits. 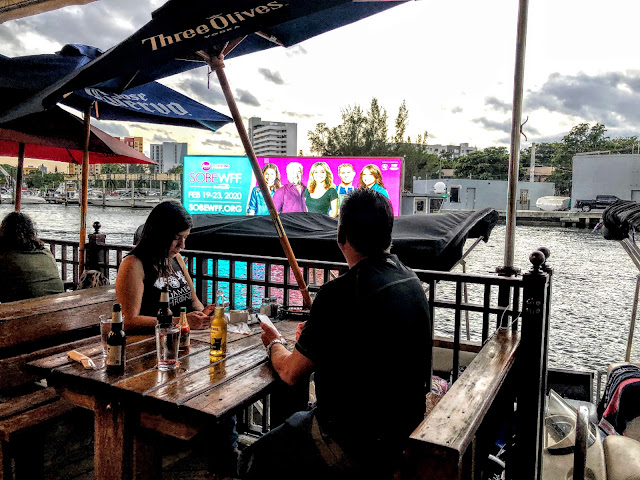 In the picture above you can see a floating billboard which I managed to photograph as it displayed an ad for a South Beach food event coming up when TV persons will escape the drab urban snowfields Up North and do silly things under the palms down here to raise money for charity and to raise their own self importance. Beware then, I am hip by association, as I drift through the modern sunny capital the union of north and south America. 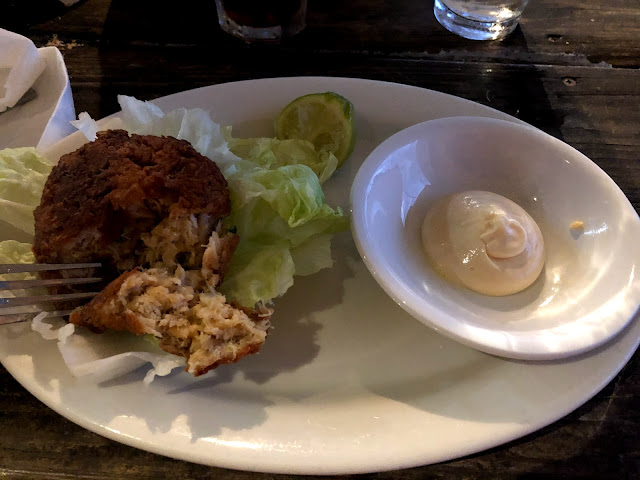 Oh yes, we ate food too. Staff at Garcia's are professionals and extremely friendly even as they are capably handling your order and your wife's high maintenance "on the side" requirements. The crab cakes were made of crab and quite delicious. Each one was a $15  starter ( we no longer call appetizers "appetizers" as they are now British "starters." Whatever, I told you we are hip). 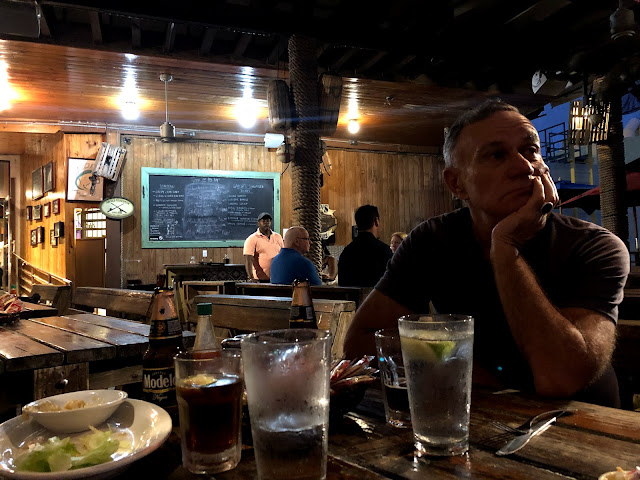 Van looking pensive as well he might. A sudden winter rain storm blew down upon us as Layne went to the car to get Rusty. She got soaked and closed the car windows and Rusty came skipping in delighted to see me and fascinated by all that was going on around him as usual. As I watch Rusty absorb the world around him I pity those poor dogs that live on chains or never get out.  I know dogs love sharing our lives no matter how much we are told animals aren't like us.. 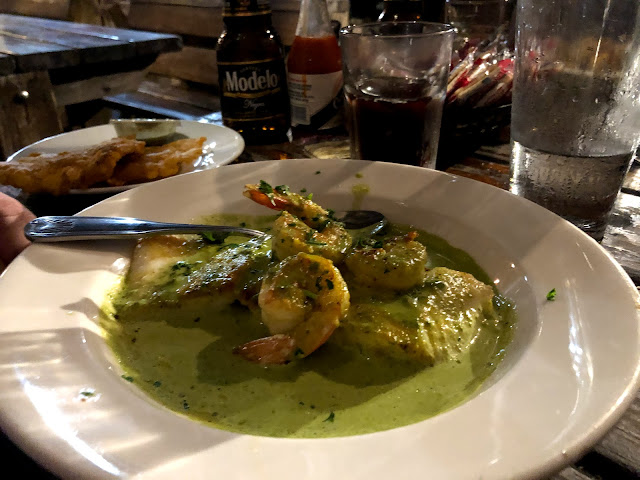 Meanwhile the fish was for us, cilantro sauce and some spicy Peruvian yellow sauce which my wife and I shared. 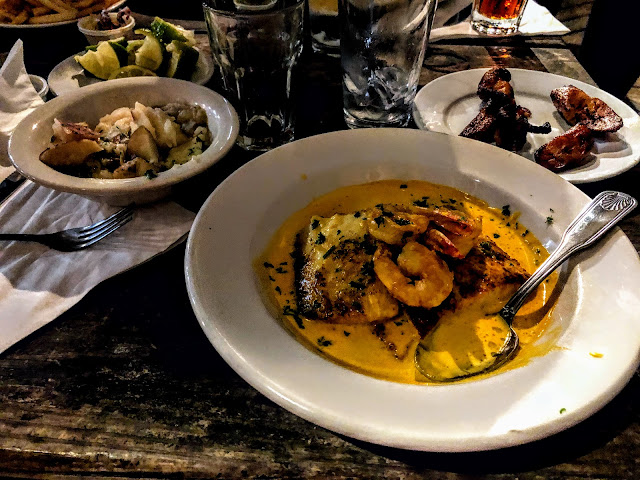 the clouds opened up and a burst of thick heavy rain fell on the proceedings like a curtain of water. The tables at water's edge got drenched and the early birds who snagged prime seating had to retreat. I kept eating my fish while a small stream of water went down my back. the awnings did their best but the rain was heavy. and then a cargo ship came down the river, backwards, right past our table.The tug at the back got pulled sideways for a while and nearly went under water or so it seemed...all ended well of course and they disappeared round a corner in the river. Just another working night on the Miami River. For us it was a special night out in Manhattan South! Great stuff indeed.. 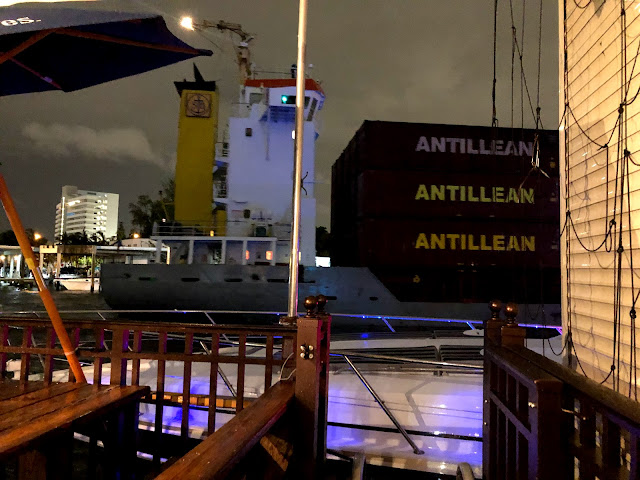 Rusty kept his equanimity and sat underneath the table watching the world go by. I never gave him a single french fry while he sat there either. On my word your Honor it wasn't me. Vicious slander. 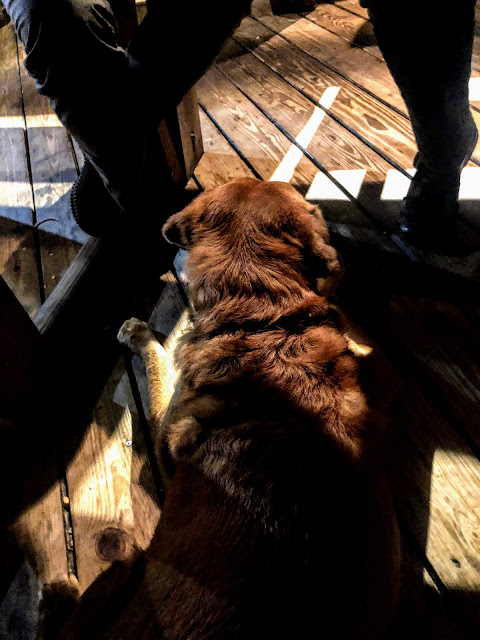 But it was me that got us into the flan for dessert. Of course no one else wanted to admit to wanting a great  big glop of sugar but each of us had a spoon to taste the thing. It was excellent, not sweet but surrounded by liquid nectar. So there: no wanted it; everyone enjoyed it. 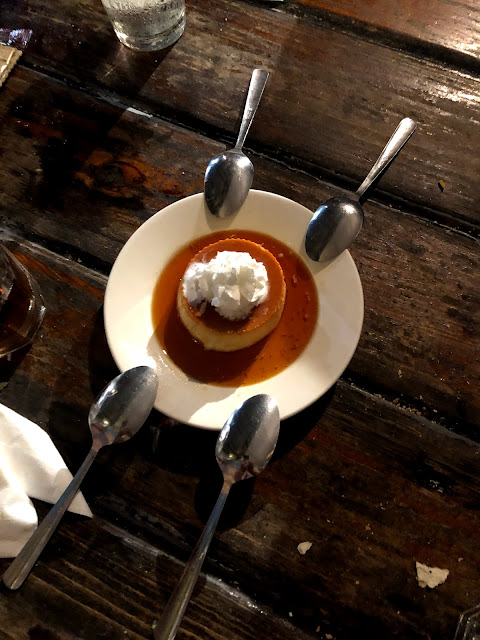 Anthony Bourdain liked this place, at least he said he did on his TV show. I can see why, as the place is rough hewn the welcome is genuinely cheerful and the fish is perfect. Get there before six in the evening if you want to avoid the lines, if you aren't famous or on TV or something. I'm none of that so we were driving home a little the damper for our experience by 7:30. That's neither very Miami nor very Latin Americans but here's the thing: I'm actually not at all hip, not even in the capital of southern hipness,Miami. 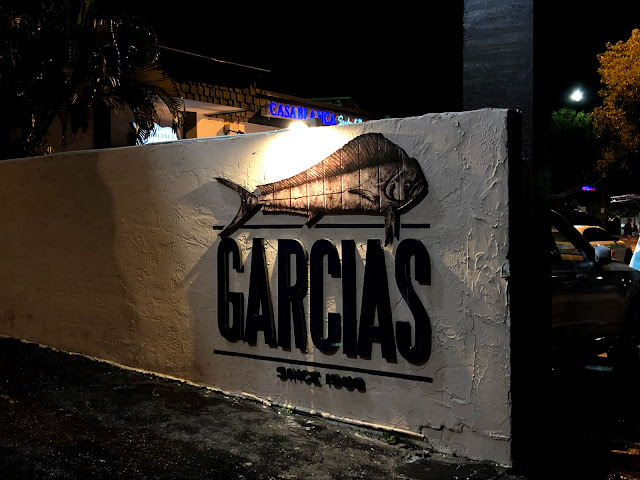