I lived in Santa Cruz,  California for nearly twenty years and looking back I feel like I missed a lot of opportunities to see places and things that deserved my attention. I dare say my natural curiosity took me further afield than might otherwise have been the case but I still stumble across stories of  places and curiosities in the Golden State unknown to me. Here below we look out of the Audubon House in Key West at Clinton Square and the Customs House, now a fine museum. 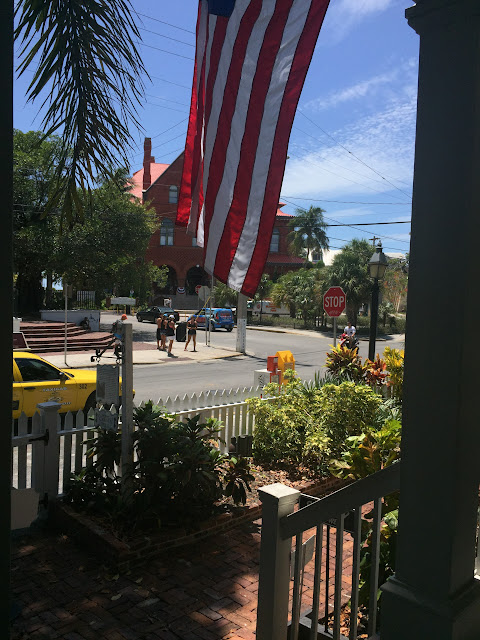 In that time I made several efforts to live in Florida but my residence here never jelled. I would hand in my Florida driver's license and re-institute my California document, or vice versa as I tried living in Tampa and St Petersburg or Fort Myers or Key West and none of the visits to the land of sun and heat took very well. I always ended up back in the fog of California's Central Coast living through cold wet winters and long dry summers which never seemed long enough or hot enough to suit my taste. California residents thought I was crazy to want to live in the land of hurricanes alligators and mosquitoes but Florida for me was the land of eternal sunshine and right wing nutters and it remained as elusive as Ponce de Leon's Spring of Eternal Youth. 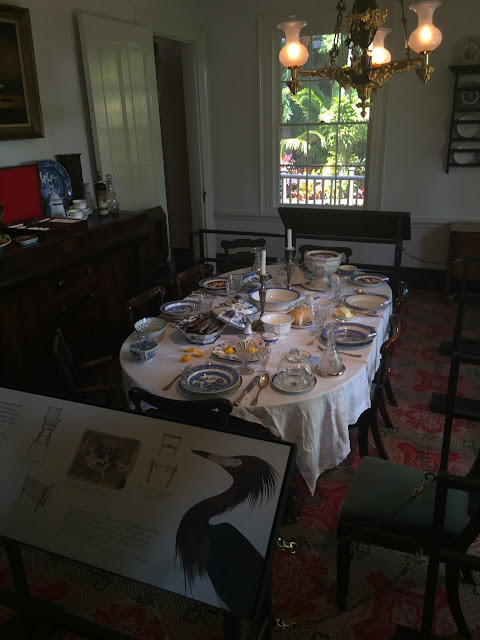 My best friend sailed to Key West and the little fishing village I had first visited in 1981 and found to be far too isolated became a likely prospect. I brought my wife and my dogs in a mad three week car trip and we sold my boat and bought an ocean going catamaran and made vague plans to sail to the Caribbean. We both wanted eternal summers, me and my California wife. We made road trips around California and I took motorcycle rides and still I felt I barely scraped the surface of all there was to see. 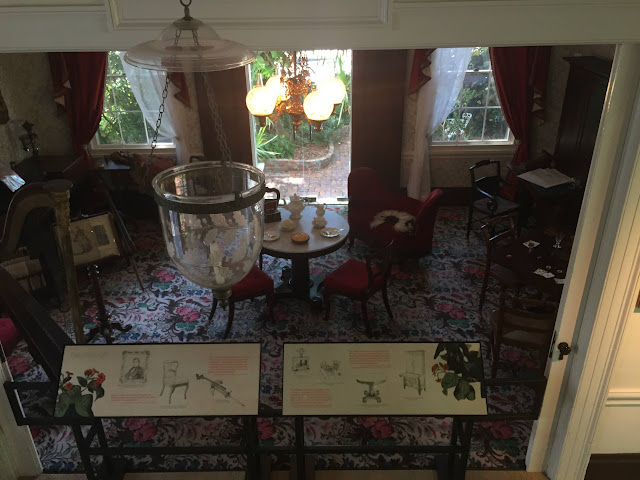 In Florida we made a conscious decision to see everything we could want to see and that choice was made easy by virtue of the fact that we tried living in mainland Florida after we arrived in our sailboat. Mainland Florida was cheap but not cheerful and we yielded to the inevitable and settled in Key West, more than 500 miles from the Georgia state line, 800 miles from distant Pensacola. We were far from anywhere. We planned road trips and  we carried them out to see what we could. All this by way of introduction to explain why I have never previously visited the so called Audubon House, named for the painter of birds illustrated below, painted by John Syme in  1826: 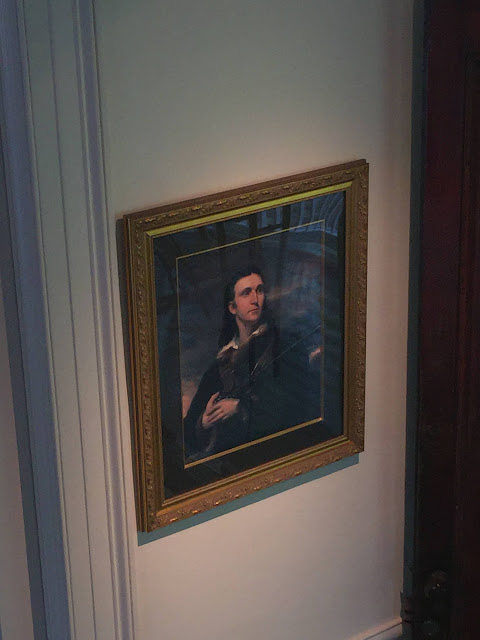 The fact is he was a visitor for a short time before the Civil War and in his time in Key West he visited the Dry Tortugas and found birds to kill so he could paint them. It was a weird way to do the work of loving birds but that was what he did. He had an interesting life worth reading HERE but the fact is he was  a mere sideshow in this house that should more properly be known as the Geiger House. 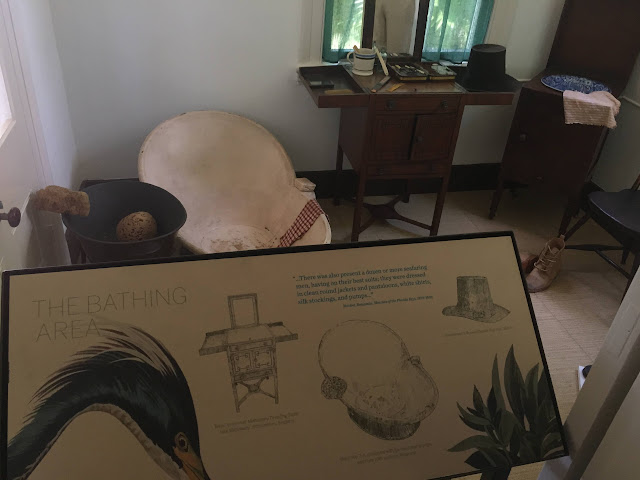 In this picture, from the Audubon House website we see the man John Huling Geiger who had this house built and who lived in it with his wife twelve children and their slaves:

He was of German descent and said to be  a pretty severe man who made his money by wrecking and by being the best at it. He spared no one and the gruesome tale of having a pregnant slave whipped is told by one of his descendants in the video on display in the house. His legacy is the Geiger plant named after him, as well one assumes of Geiger Key and this superb home on Whitehead Street restored in the 1950s and now one of the best old home museums I have seen, and I have seen a few. 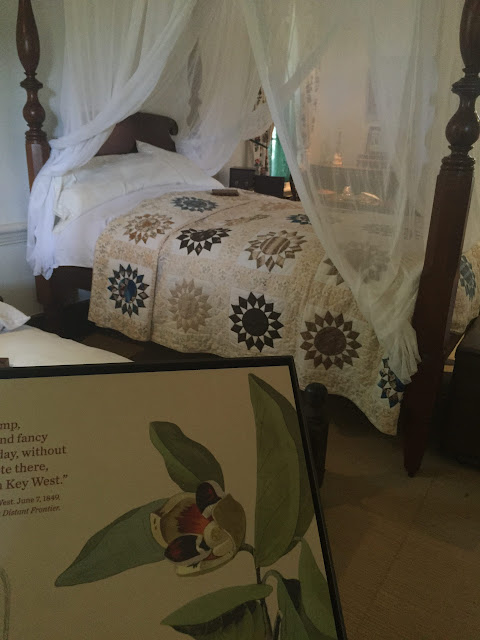 The rooms are perfectly laid out with period accessories and  complemented by Audubon drawings and scraps from letters and diaries of the period. I found the house perfectly done and worth hours of your time. Why I resisted visiting this place I cannot say and it was a mistake not to check it out. 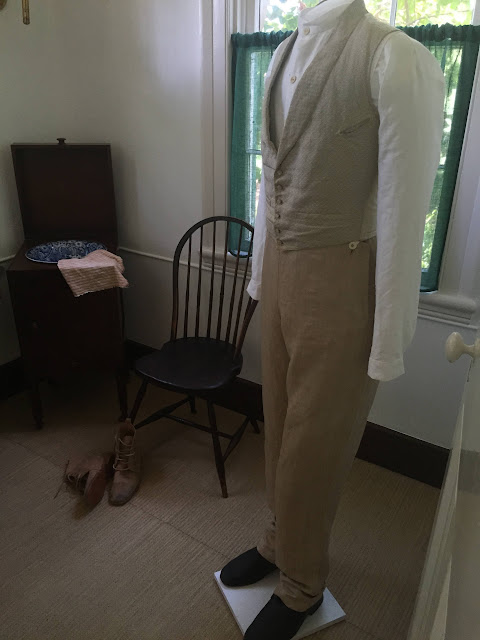 Check out this letter from 1849  describing the idle  idyll of daily life for the upper classes in Key West at the time. 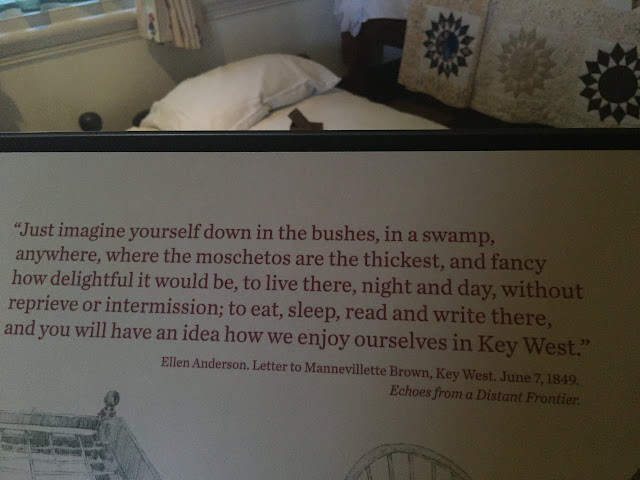 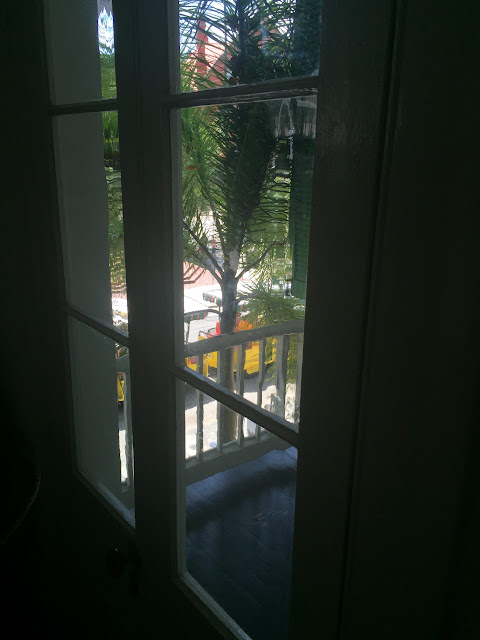 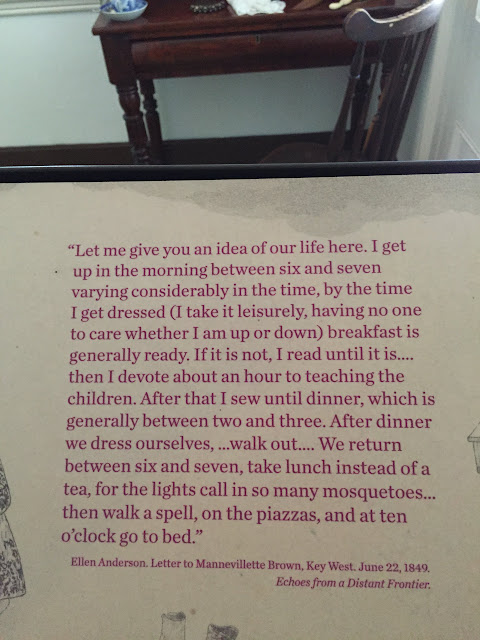 One has to assume that life in summer was a a bit of a burden for women who had no access to bikinis or sarongs or the lighter side of the wardrobe as enjoyed by modern women. 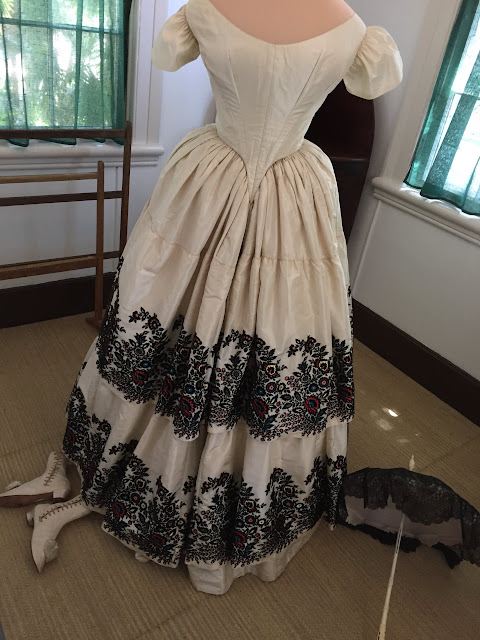 Thanks to its  strategic position on the trade routes to and from the Gulf of Mexico, Key West was for a time one of the wealthiest cities in the US. The constant stream of ships brought news from the outside world as well as the latest fashions and exotic household gadgets and dry goods. People lived well here in the most salubrious climate in Florida. In those days only Key West and Indian Key were inhabited by white people in urban settlements. The other islands were barren and only occasionally inhabited by eccentrics, lonely farmers or fugitives. Mainland Florida was an impenetrable swamp filled with yellow fever, insects and rebellious Seminoles allied with runaway slaves. No one wanted to live in Florida. Key West offered all amenities and was thoroughly modern. 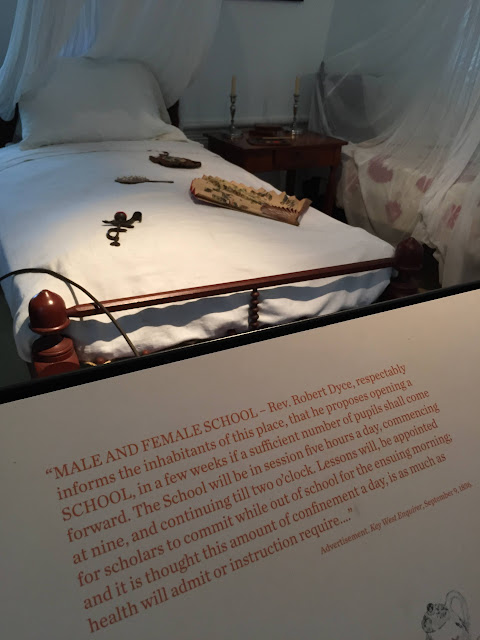 It must have been quite the life to have money and slaves and to live in such a place. What am I saying? It still is for those that can! The rest of us work...and it still isn't at all bad! 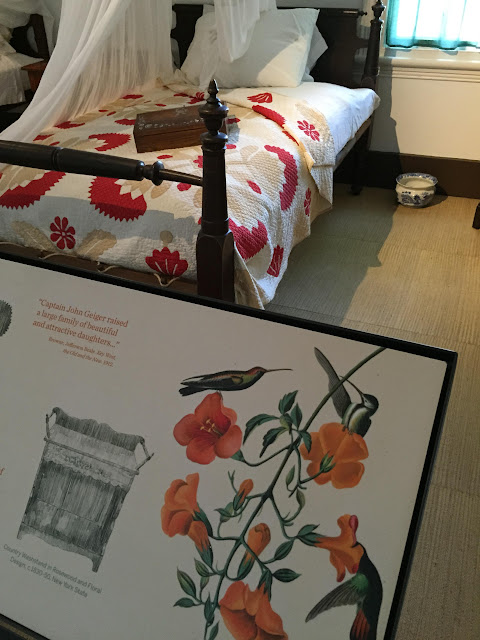 There are we are told some 28 original Audubon prints in the house's collection but the reproductions on display are as lively and lovely as they are difficult to photograph successfully. 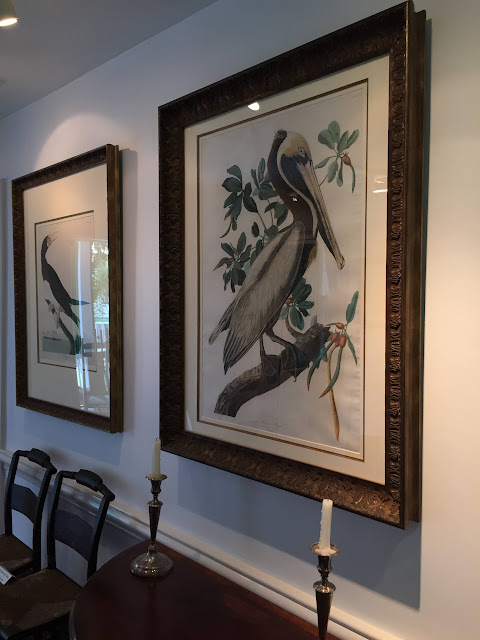 Outside there is a garden to enjoy after the house visit. 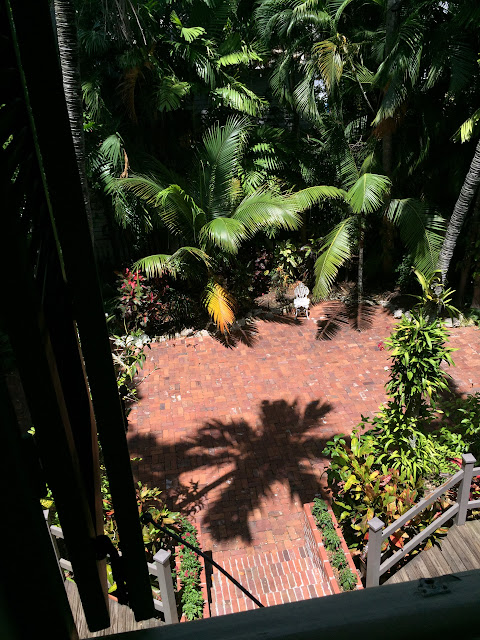 Hammocks and shady verandas were much in evidence in the period. 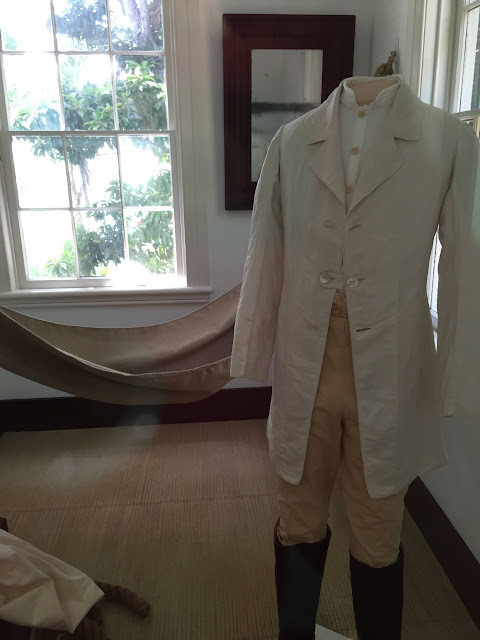 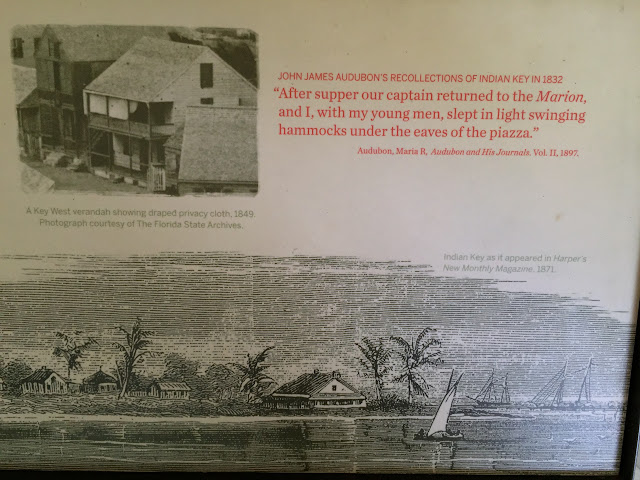 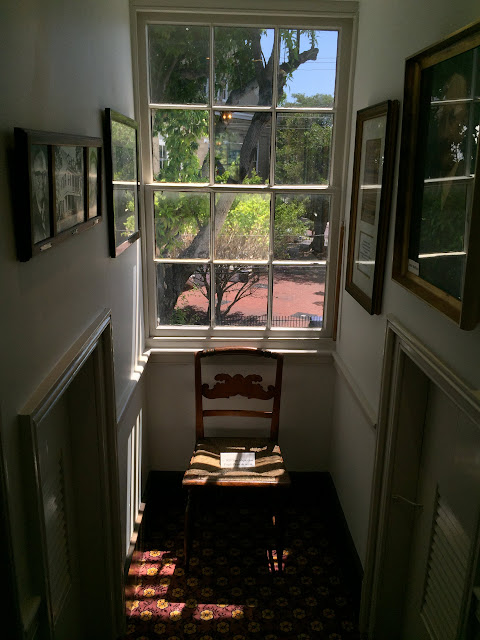 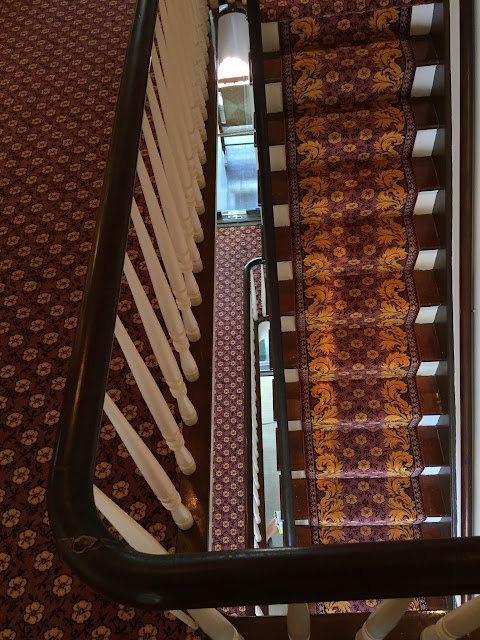 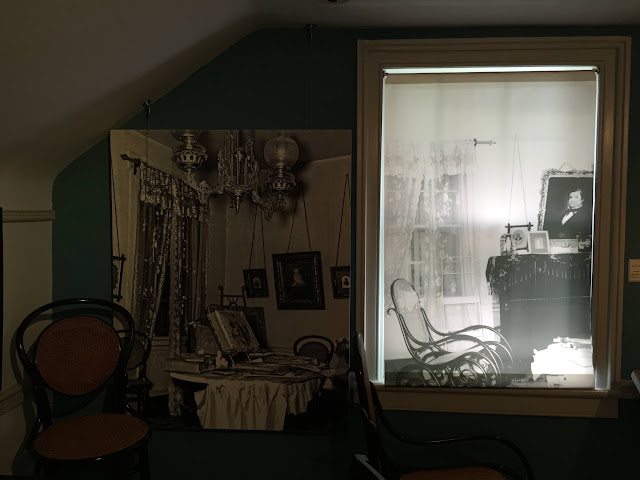 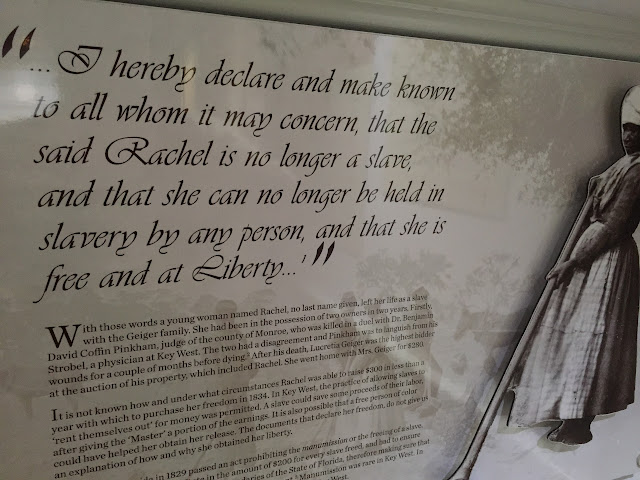 The "tour" of the house is a brief introduction at the entrance by a docent and then you are cast loose to visit at will the home and the gardens. This time of year is excellent as there aren't nearly as many people as there would be in winter, as usual in Key West. Upstairs there is this video presentation by Richard de Aguero which is both informative and very funny. He lives in Miami and is a descendant of the great "Old Man" Geiger and he tells a great story or two about the goings on in the house. Well worth sitting down to watch. 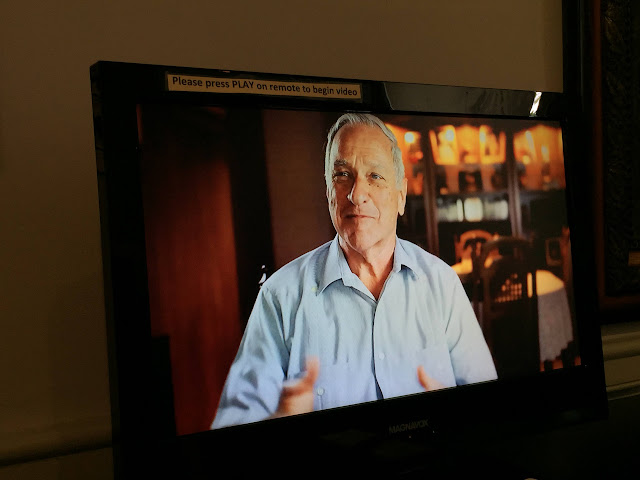 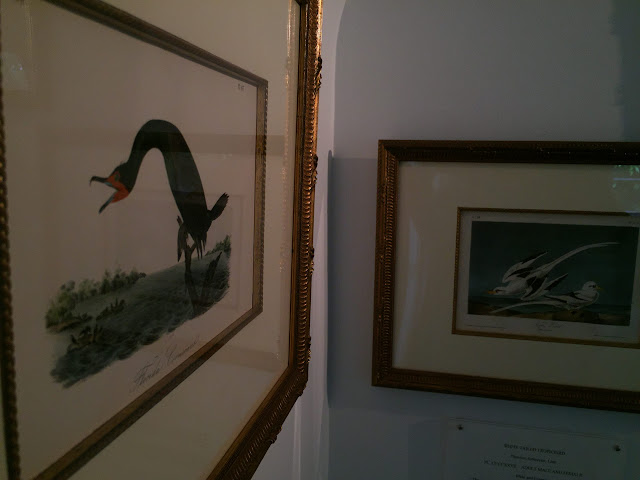 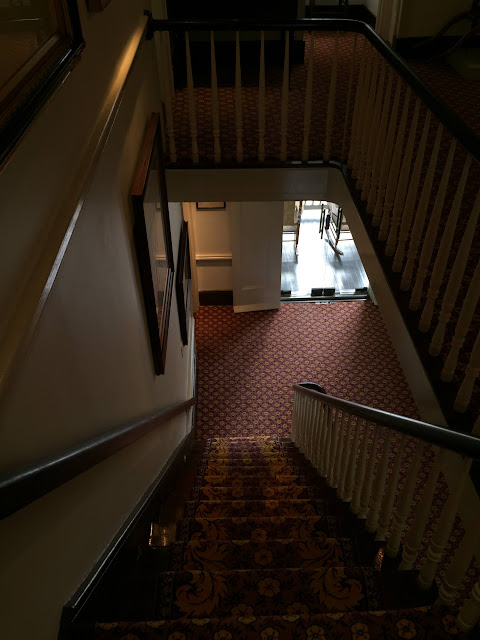 I had a great time on the house and my hat is off to the curator Katia Dabdoub Hechema whose work is really extraordinary in bringing this place alive and I am told she isn't quite finished yet. 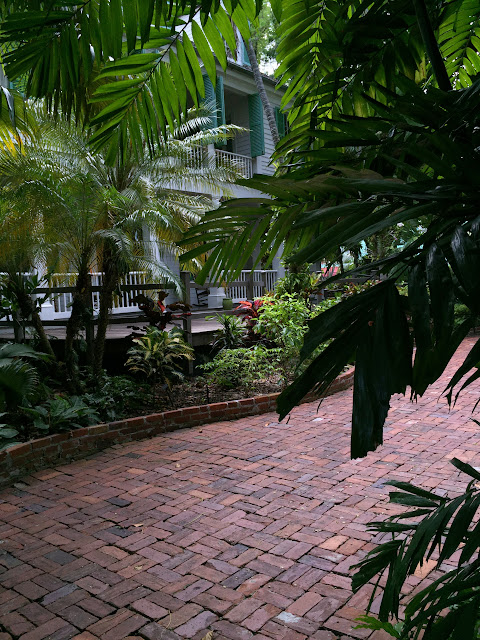 The outdoor kitchen was  a popular feature in the homes of wealthy Southerners and I've seen this concept many times elsewhere. Pity the poor slave cooking in this inferno. 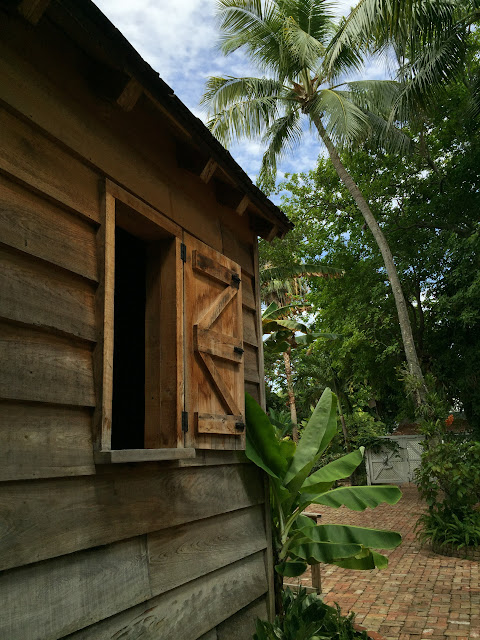 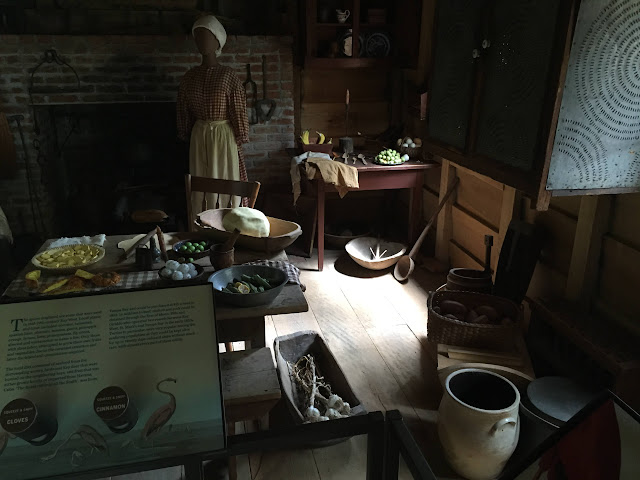 The link for the Audubon House is  HERE 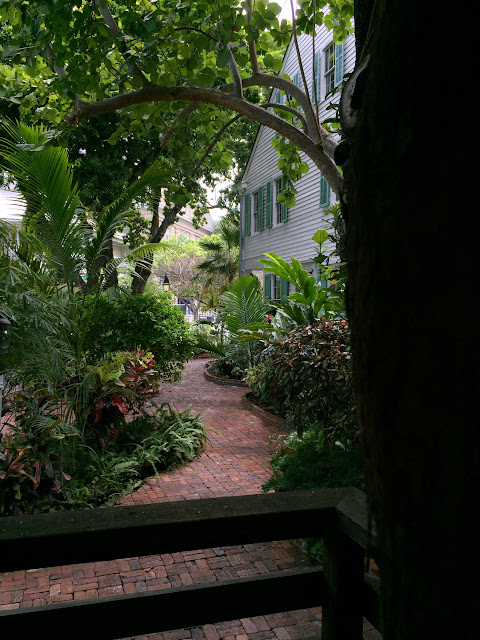 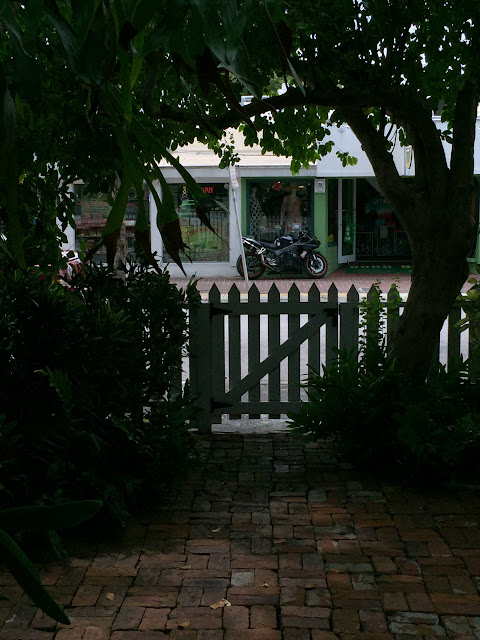 Highly enjoyable way to spend a hot afternoon and see how the one percent lived a hundred and fifty years ago. Strongly recommended.
Posted by Conchscooter at 12:00 AM 6 comments: