This short post at Latitude 38's 'Lectronic Latitude site (see the top of my web list) cracked me up. So I figured I'd share the fun. I used to be a sailor and lived on boats for many years. In fact my wife and I sailed to Key West from Santa Cruz, California from 1998 to 2000 via Panama. Latitude 38 was a fantastic resource during that trip and I enjoy reading about the goings on in the San Francisco area. They also have an excellent sense of humor as shown here.

It’s easy for longtime sailors to forget how hard the ‘lingo’ can be for newcomers to learn. We were reminded of this recently when a newbie made the following observations:

“A rope is a rope until you bring it aboard a boat. Then it’s a line. Unless it’s used to pull sails, then it’s a sheet. Cut it into pieces and it can become a guy — but never a girl. Or a vang, outhaul, downhaul, gasket, topping lift, jackline, halyard, twing, reef point, traveler, or probably a bunch of other stuff. When you’re done sailing, that same bit of . . . cordage . . . can become a dockline or a spring. But as soon as you coil it up and step onto the dock, it’s a rope again.

“And you guys are writers, yet you never correct things like ‘down below’ and ‘up forward’. Aren’t those phrases redundant?”

By golly, he was right about that, too.

“And I’ve seen ‘anchors away!’ used lots of times to mean letting the anchor drop. I’ve also heard it used to mean raise the anchor. Which one’s right?”

"Well," we said loudly (relieved to finally get a question we could answer without sounding like dorks), "technically, 'anchors aweigh' — meaning to raise the anchor — is proper. But yes, we’ve often seen them confused, probably because ‘aweigh’ sounds just like ‘away'."

He took us to task on a couple other points, but frankly we have no idea why the place where the shrouds and forestay attach to the mast is called the hounds — or why it’s plural. Or why ‘fetch’ has nothing to do with any kind of, er, hound bringing back a stick you’ve thrown. But we were able to confirm that a winch has nothing to do with a wench. Even though some nonsailors also get those two mixed up sometimes.

There was more. No, on sailboats, mast cranes aren’t used to lift anything, and tabernacles have nothing to do with Morman choirs. When he started in on why 'ceilings' and 'floors' had nothing to do with their shoreside counterparts, we glanced nervously at our watch. Oh wow, look at the time! — we were, um, late for a meeting. Nice talking to you . . . bye.

- latitude / jr
Posted by Conchscooter at 11:15 PM 2 comments: Links to this post

When my wife's cousin Kirk came to visit from Seattle he wanted to know where she recommended he stay. My wife has, over the years, researched a whole lot of options and thought this place might fit the bill: 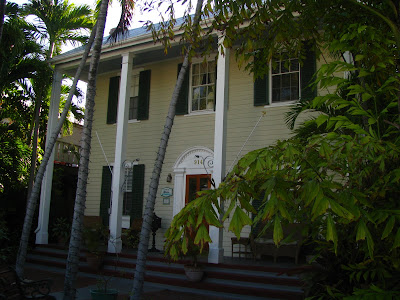 The inn is a compound of buildings clustered around a pool and garden in the center. 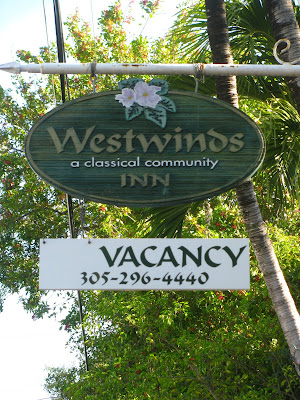 Westwinds has a driveway where guests can pull in to load and unload their vehicles but because the place is on the 900 block of Eaton Street, about five blocks from Duval Street on street parking isn't horribly hard to find nearby and the noise of drunken revelry isn't a problem. Motorcycles manage to squeeze a space on the property apparently. This machine came down from Miami, the middle aged owners' longest ever ride, they said. 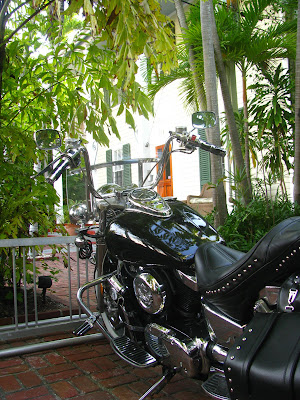 The place really is lovely. 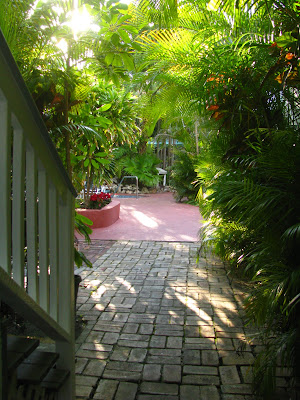 The guest units are clustered around the central area, all in the classic Key West style. 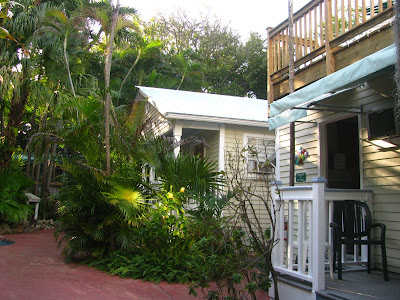 We joined Kirk and Jay for breakfast by the pool. Kirk admitted the morning air was cool enough to merit a sweatshirt, but he was enjoying his tropical breakfast of coffee cereal and fruit by the pool. 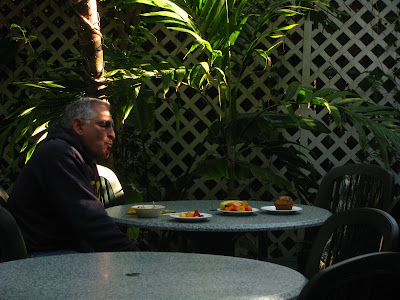 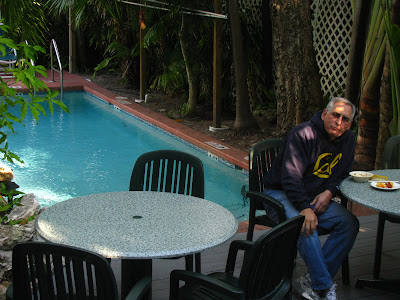 The breakfast buffet included muffins and do-it-yourself toast. I also had a pastry with my coffee, the net result of which was a spot of indigestion later in the morning. I am no longer used to sugar confections for breakfast, and all this tourist living was proving more robust than my tender constitution could take. 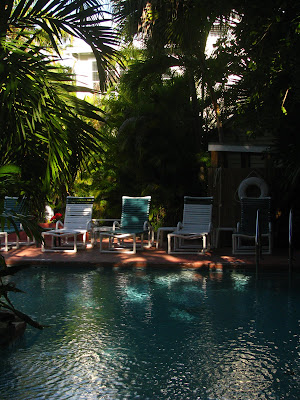 Standing around making toast for myself enjoying the view is a life one could get used to I suppose, with a little effort. Though honestly my porch at home where I eat oatmeal and drink tea isn't so very different. 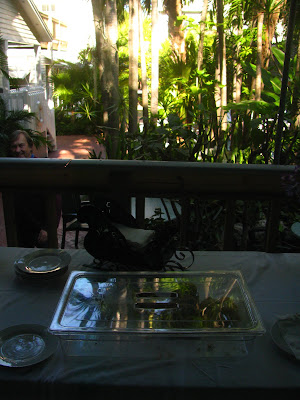 I am a self reliant man for the twenty-first century and I don't mind washing up my own dishes which is not an issue when you stay in decadent places like this where they clean up after you..." Not bad," was Kirk's verdict on the place though he thought $200 a night was quite high. Not for Key West in winter, my wife pointed out, and Kirk agreed remembering that summer rates are considerably less. 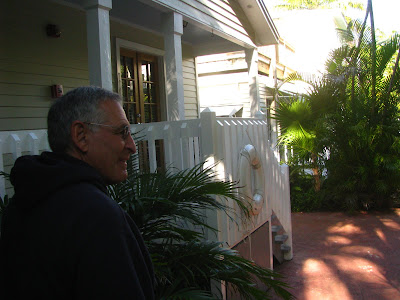 We paused too check out the flora, though with my brain like a sieve I forgot what I read before I was back out on the street. I will never be a botanist. 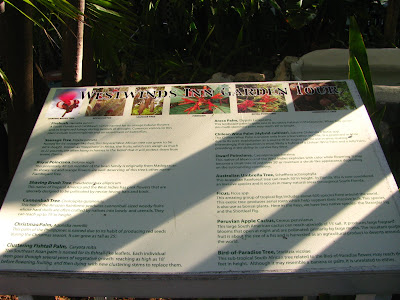 Lovely morning light at all angles. 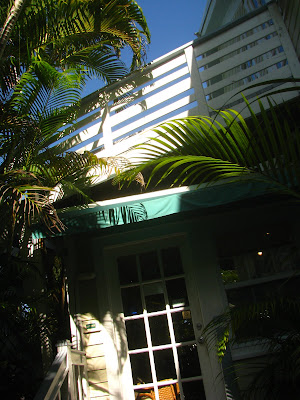 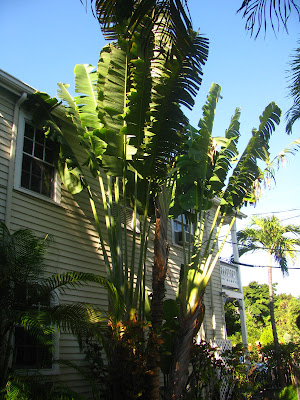 Eaton Street is main road into the Duval Street area, as it comes off Palm Avenue from North Roosevelt Boulevard. Traffic can be heavy but for all that, this isn't a busy corner of town, surprisingly. 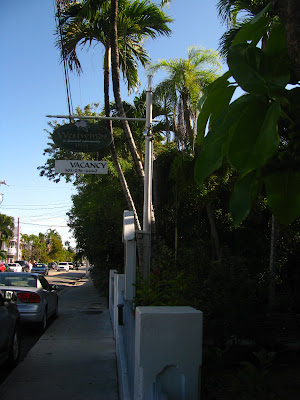 http://www.westwindskeywest.com/ for rates and all the other useful information.
Posted by Conchscooter at 12:01 AM 5 comments: Links to this post