Simonton Beach remains one of those funky little treasures in Key West that you can visit and enjoy without spending any money at all.  So I come back from time to time and take a quick peak at the west end of Simonton Street at this little strand of sand wedged between two large hotels. 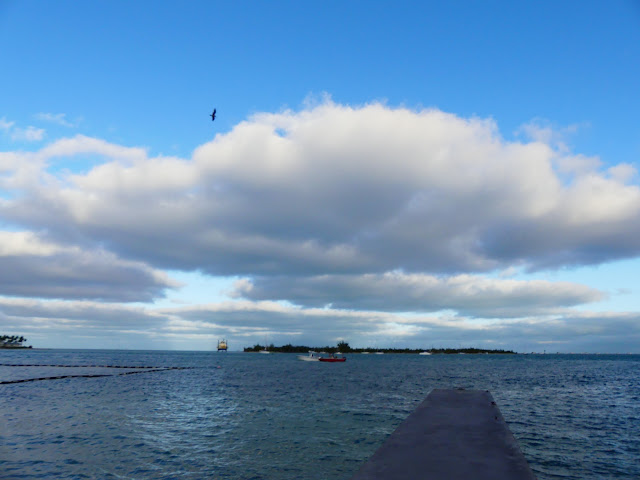 I caught a glimpse of the Sunset Key ferry heading into the island dock. The ferry runs all day and all night every half hour in each direction. The crossing takes less than ten minutes and in the middle of the night it runs on demand. But you have to have a reason to ride it, a meal at the restaurateur on the island and if not that  then permanent or temporary residence in the exclusive quarters out there. It's terribly private and random wandering, even if you rent a cottage for the night, is not allowed in case you butt into a musician, an actor or a politician, who none of them mix with hoi polloi like you or me. 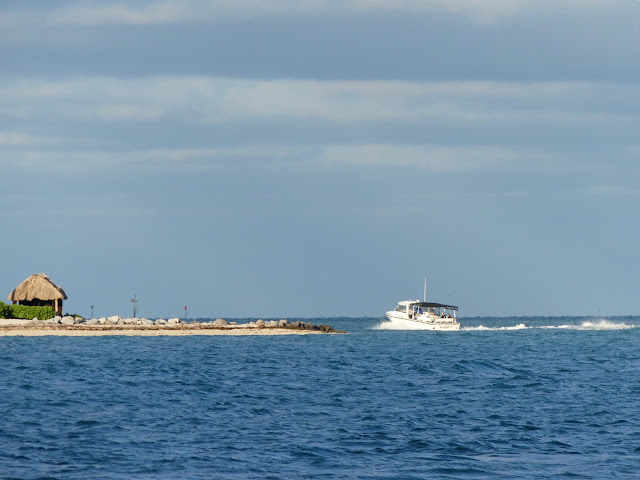 The former public lavatory on Simonton Beach (coming back to earth here with a bump!) has been converted into a restaurant and a very good thing it has turned into to, in my opinion. What used to be a hang out for bums and unsavory characters has become a pleasant place for those who like to sit on beaches and eat a sandwich or drink a beer. I don't have much truck with bums mostly and even less  do I lollygag on beaches but for those that do this spot has become cleaned up and accessible. Rusty and I were there early so he got to hang without being shooed away. 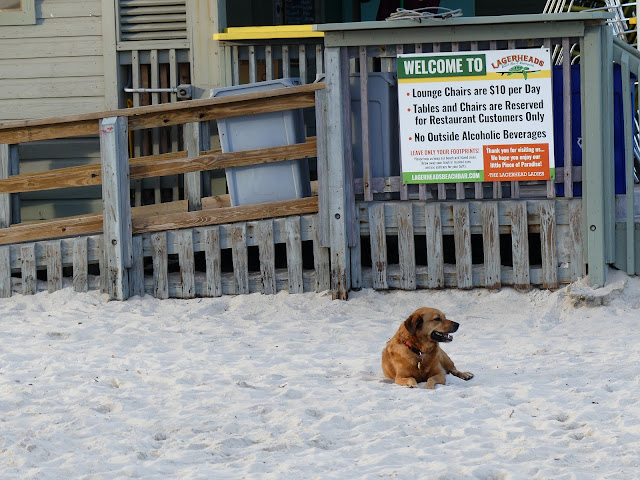 If you lived on a boat in Key West Harbor this would be you (below) commuting. It looks romantic but his bum is probably wet and if he forgot anything he needs back on the boat, he's screwed for the rest of the day. Plus he'd better be hauling his trash and an empty jug or two to fill with drinking water to haul back to his little piece of floating paradise which he never sails as it is too much bother to move your home under sail. Other than that this is the ideal lifestyle. Until hurricane season. 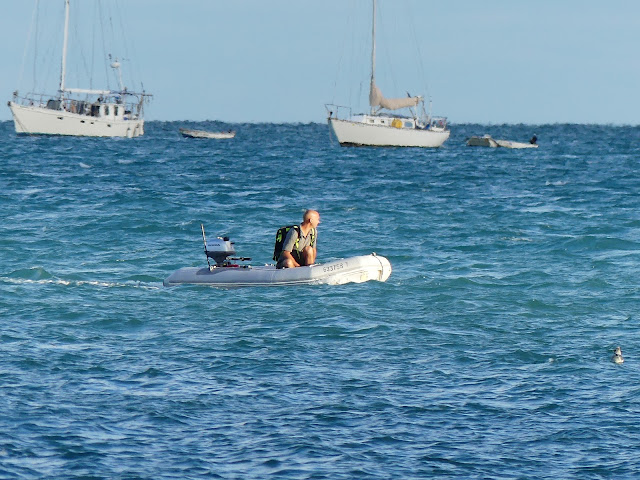 This guy uses his boat for recreation or to make money and pays the price to live on land probably: 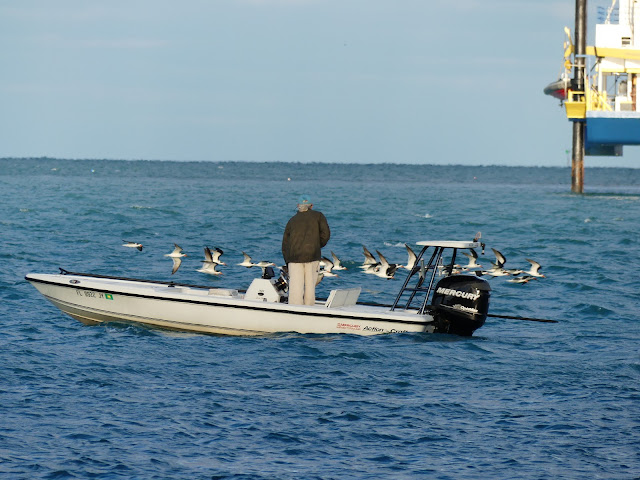 The ferry leaves at eight and gets back at five in the afternoon with a crowd of sunburned occasionally seasick or drunk passengers. I highly recommend at least one visit to the fort and if you can swing it go camping for a few nights. Staying on the island after everyone leaves is wonderful and the night sky is exceptional. Best National Park ever. 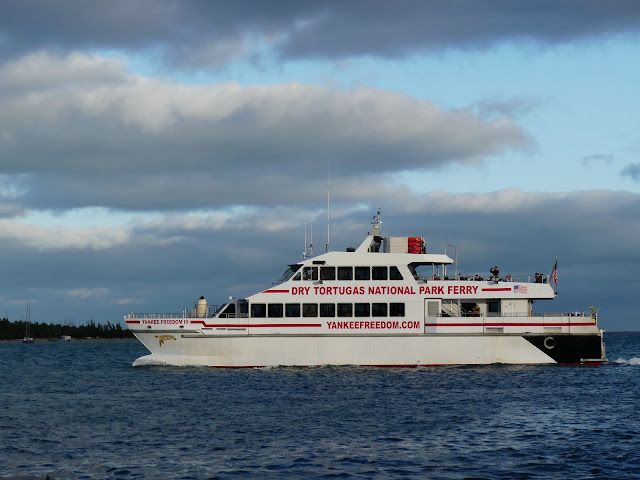 Oh and take boring videos as you go. Your friends will really want to see them when you get home. 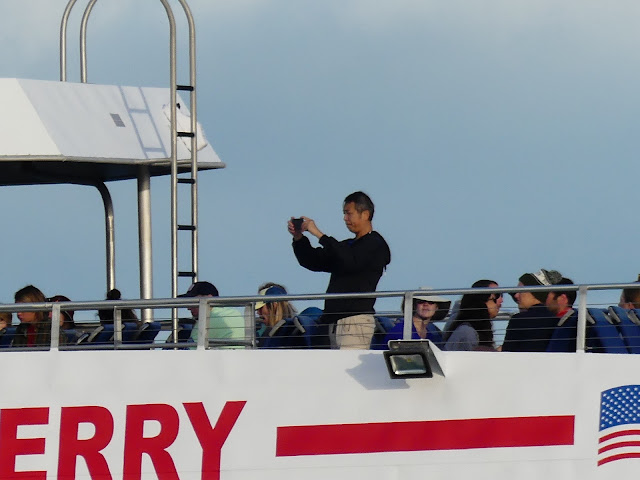 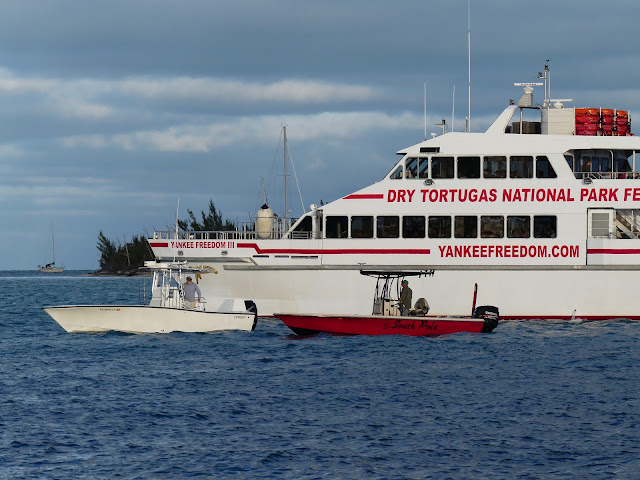 The need to gossip transcends everything. 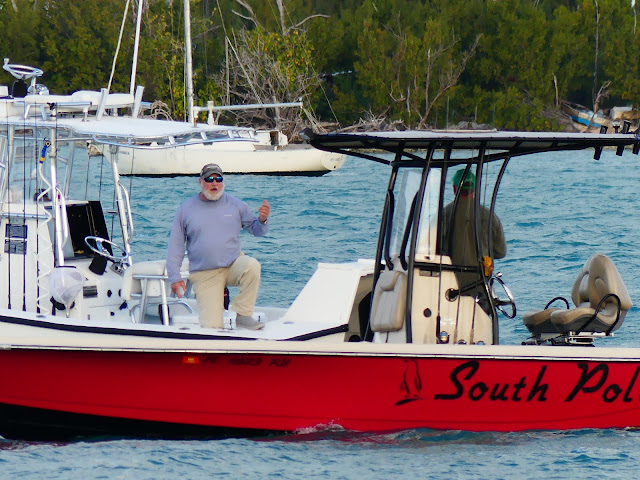 Purposeful angler. The long black pole on deck is used to punt the boat through very shallow water to chase fish on the flats. The captain stands on the platform above the engine and pushes the boat with the pole reminiscent in style of a Venetian gondolier (who actually uses a bent paddle not a pole). 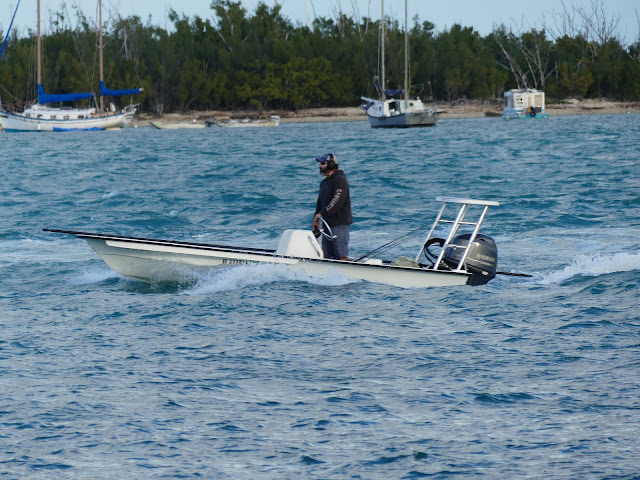 Simonton Beach from the cement dock along which I had propelled my rolling walker and which I had to make sure I didn't drop over the side in my eagerness to take pictures. The bright plastic things are pedal operated catamarans which when I was a kid were called pedalos. 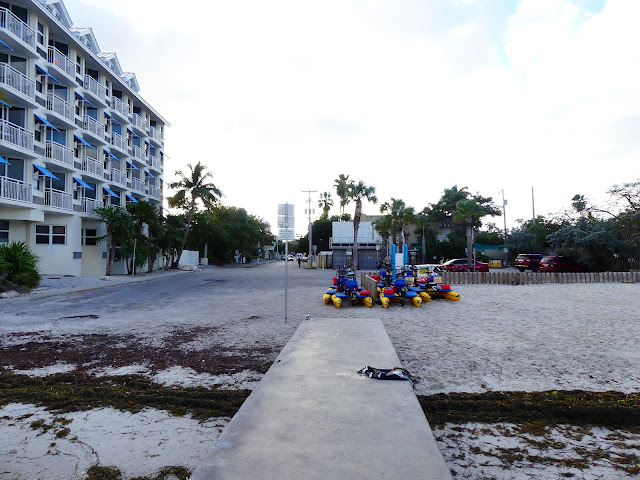 The shed is actually Lagerheads restaurant which you can check on Tripadvisor where people say they like it. 300 reviews and 68%  excellent. 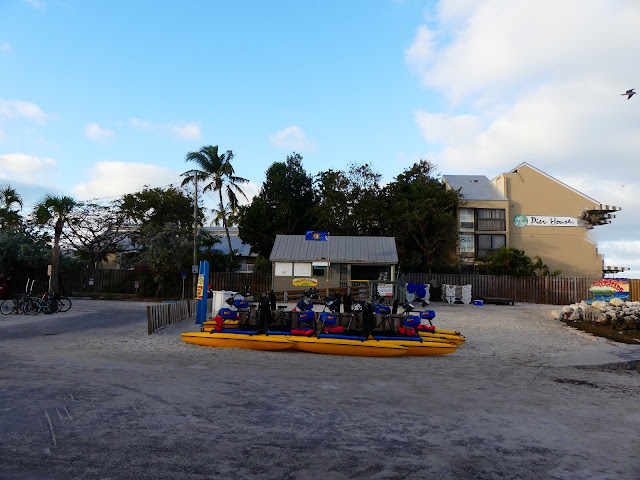 I used a filter to reduce the colors in this picture which didn't get as many thumbs up as I would have given it on Instagram. I really like the picture as it came out. 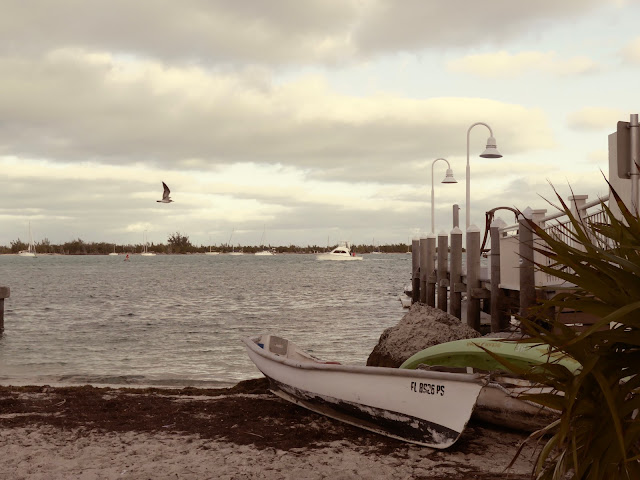 Then some black and white: 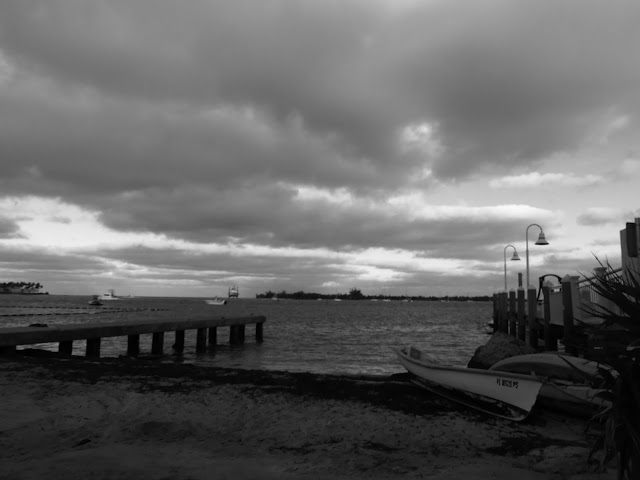 I took some random boat pictures just for fun. 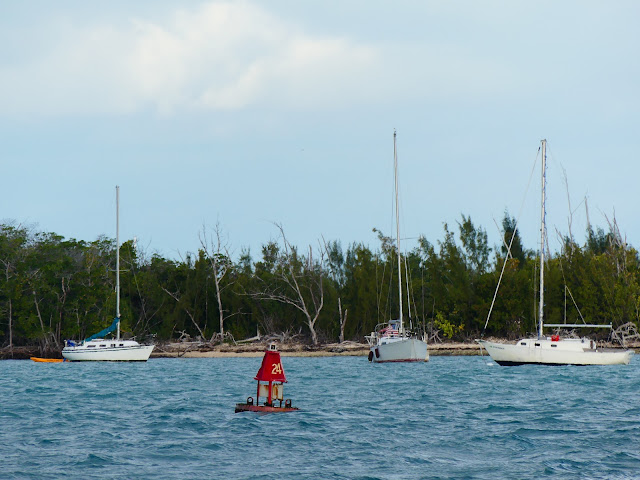 It doesn't necessarily look as bouncy and as rough as it was in the harbor. Key West is simply not well equipped with a sound all weather anchorage for pleasure boats. Boot Key Harbor in Marathon is much better offering protection from wind and waves in all directions. Key West Harbor is deep, requiring a lot of anchor chain and rope, and has strong currents and lots of traffic all of which adds up to a poor spot to live at anchor. To get peace and quiet you have to go a long way out beyond Christmas Tree Island (also known more formally as Wisteria Key) and the further you are the more exposed your anchorage is and the longer your commute. 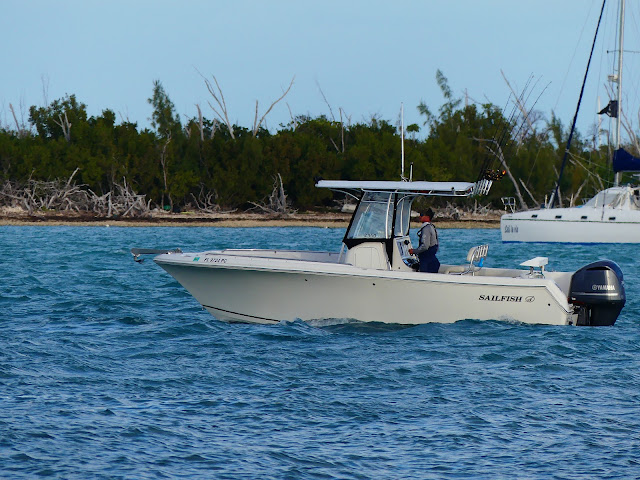 I got the impression two out of three people on this boat below, were more absorbed in their phones than in their lovely surroundings: 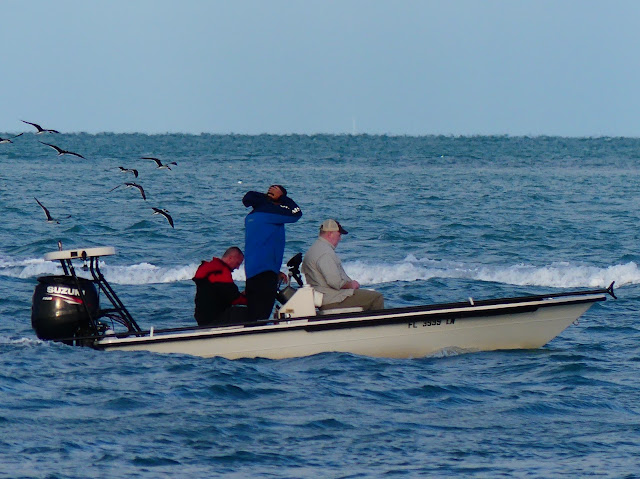 It was probably a long morning fishing already.
Posted by Conchscooter at 12:00 AM 1 comment: