My wife and I have a bet going on. I have high hopes that by the middle of next month I will be a millionaire and Layne will be utterly devastatingly impoverished.  I am confident because I believe we can be all packed up by mid October and there is a million dollar bet riding on this.  If I am wrong and we aren't all packed up by October 12th I shall be bankrupt and Layne will be rolling in it and doubtless mocking my optimism. 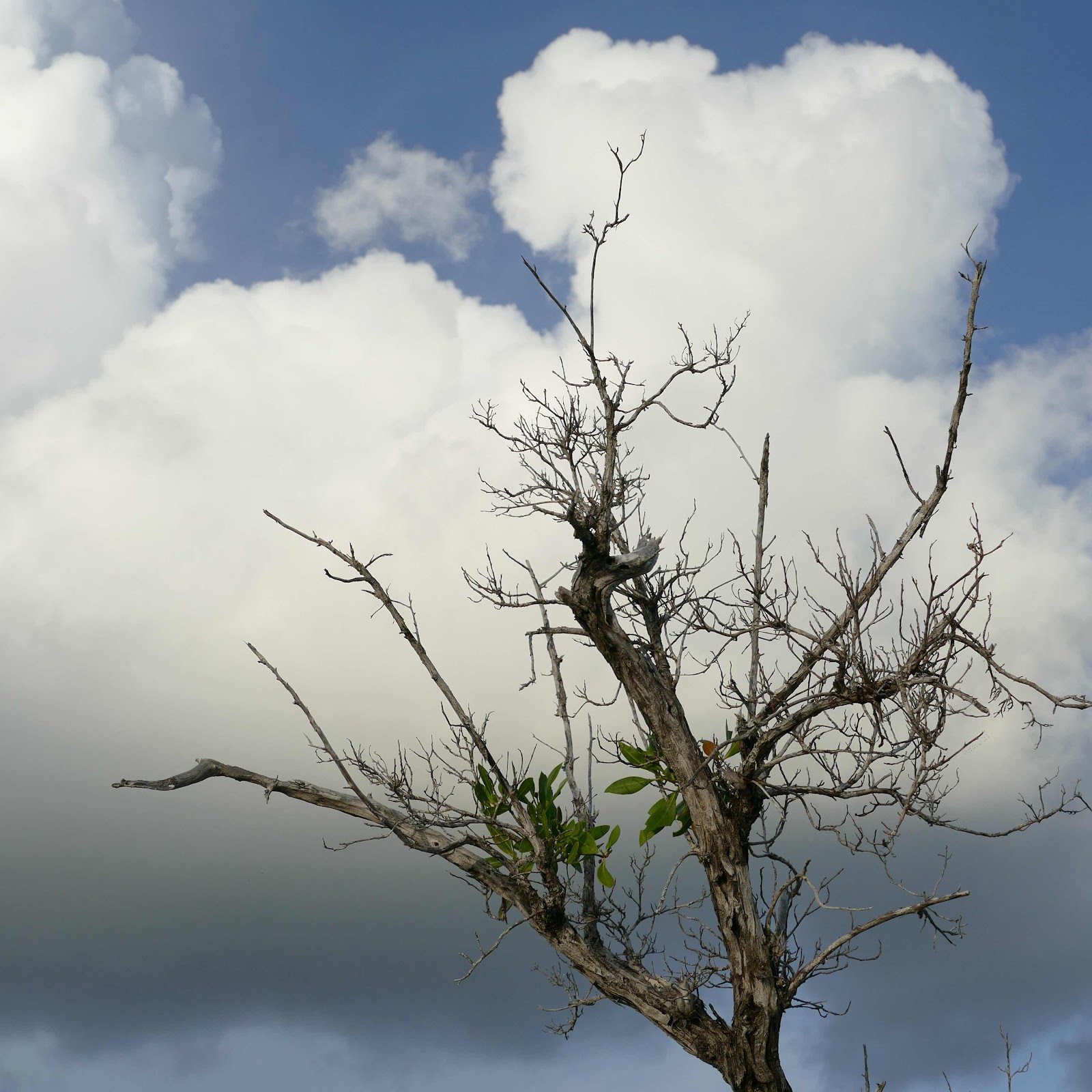 Packing up a life in preparation for a transition is an illustration of diminishing returns. The closer you get to the conclusion the more crap you find lurking in the corners of your life. I am already looking around for a hauler with a pick up truck for hire to load up bigger stuff and transport it to the dump on the other side of Cudjoe. My wife looks at me with astonishment: "I can sell that!" she insists. She can too. 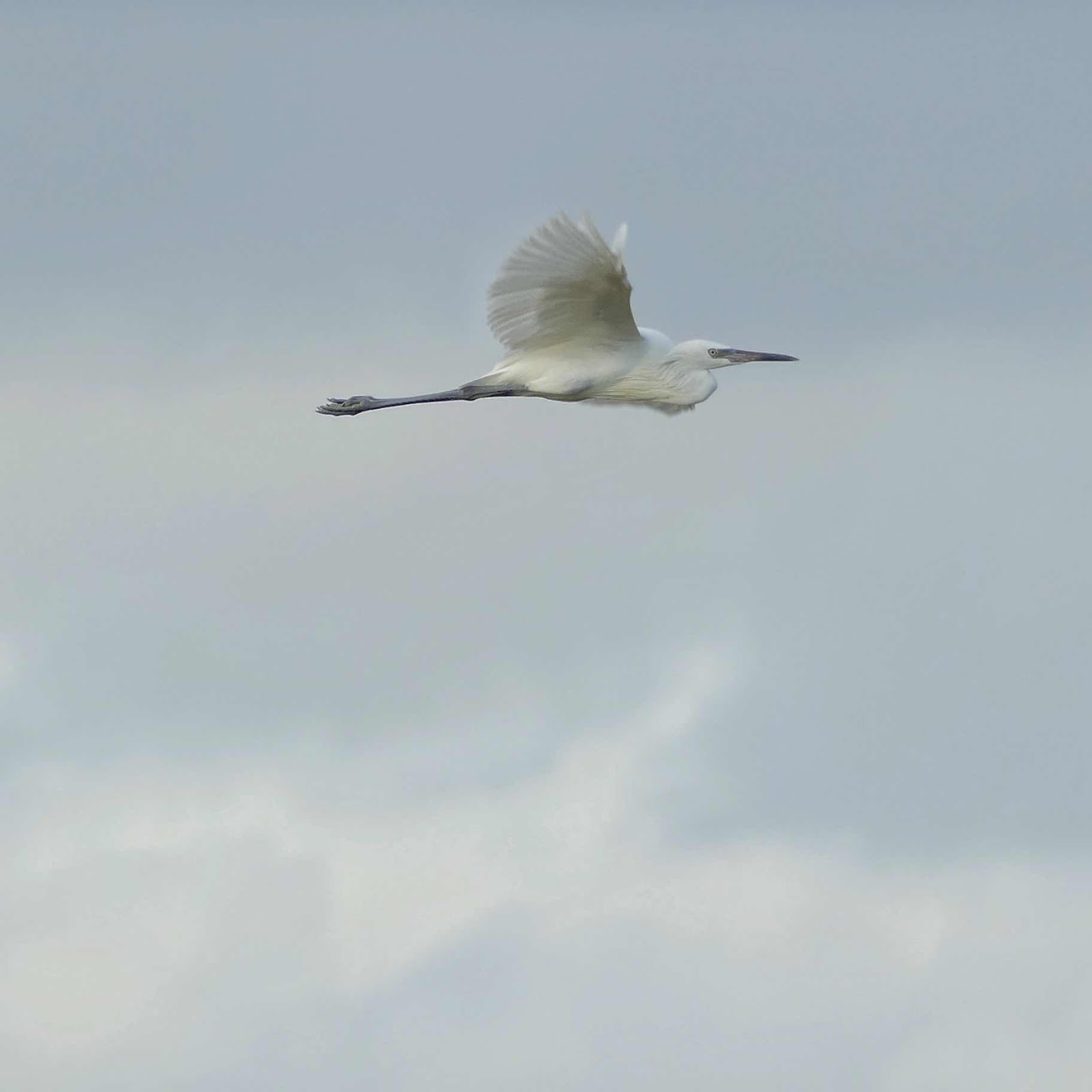 We were going to the bank on Big Pine Key to notarize one more moving document to set up a mail forwarding service. Oh good, Layne said, we can sell the Crocs. In a fit of absentmindedness Layne had bought me two pairs of size 12 Crocs, only they were in womens' sizes. Who knew there was a woman's size 12? She posted them on Facebook and we had a buyer. We arranged to meet in the bank parking lot. It was a scene from a spy novel as we lurked in the car watching vehicles pull up at First State Bank, wondering which one was the buyer. Soon enough a small black car dislodged an impressively tall black man, apparently quite flexible. We smiled at each other as in this age of Covid I stayed on my side of his car and slid the shoes across while he slipped me two tightly folded 20 dollar bills. We each sloped off from the parking lot in different directions. 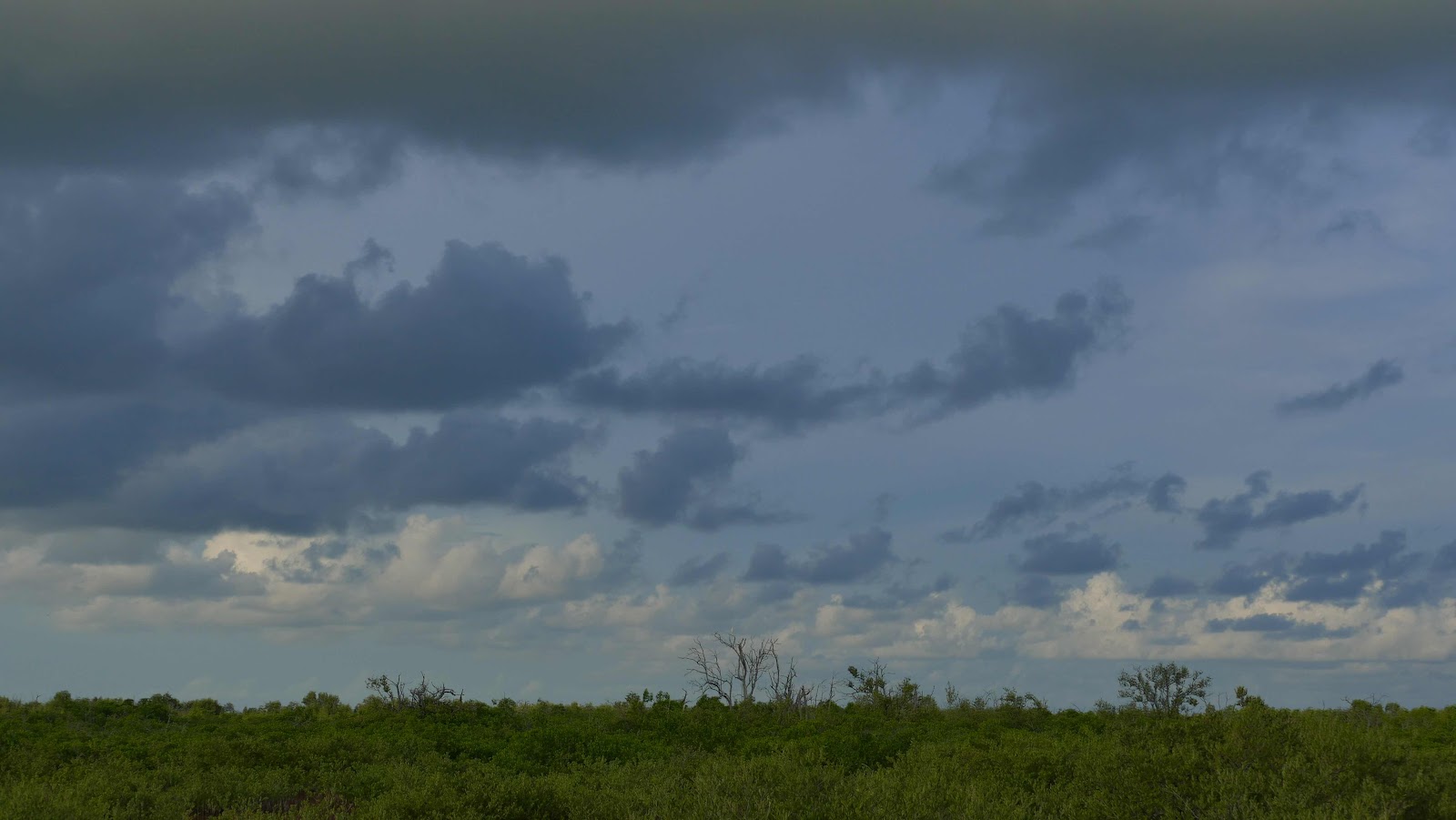 The walls of our home are becoming denuded of art. Our pictures collected on various travels are in boxes and there are boxes everywhere. "I may have sold the dressers" is a typical opening gambit in our rather weird conversations. "I can't get the damned shower tray to hold up in the van," might be my typical reply. When we lived on boats we shared pink jobs and blue jobs as we traveled. It was a source of much conversation among sailors, how jobs fell into typical pre-feminist roles among traveling boaters. Layne cooked and I tended the sails. I changed the engine oil and Layne shopped. It was weird but effective. We are going back to pink and blue jobs. Layne cooks and I study the spare tire situation. 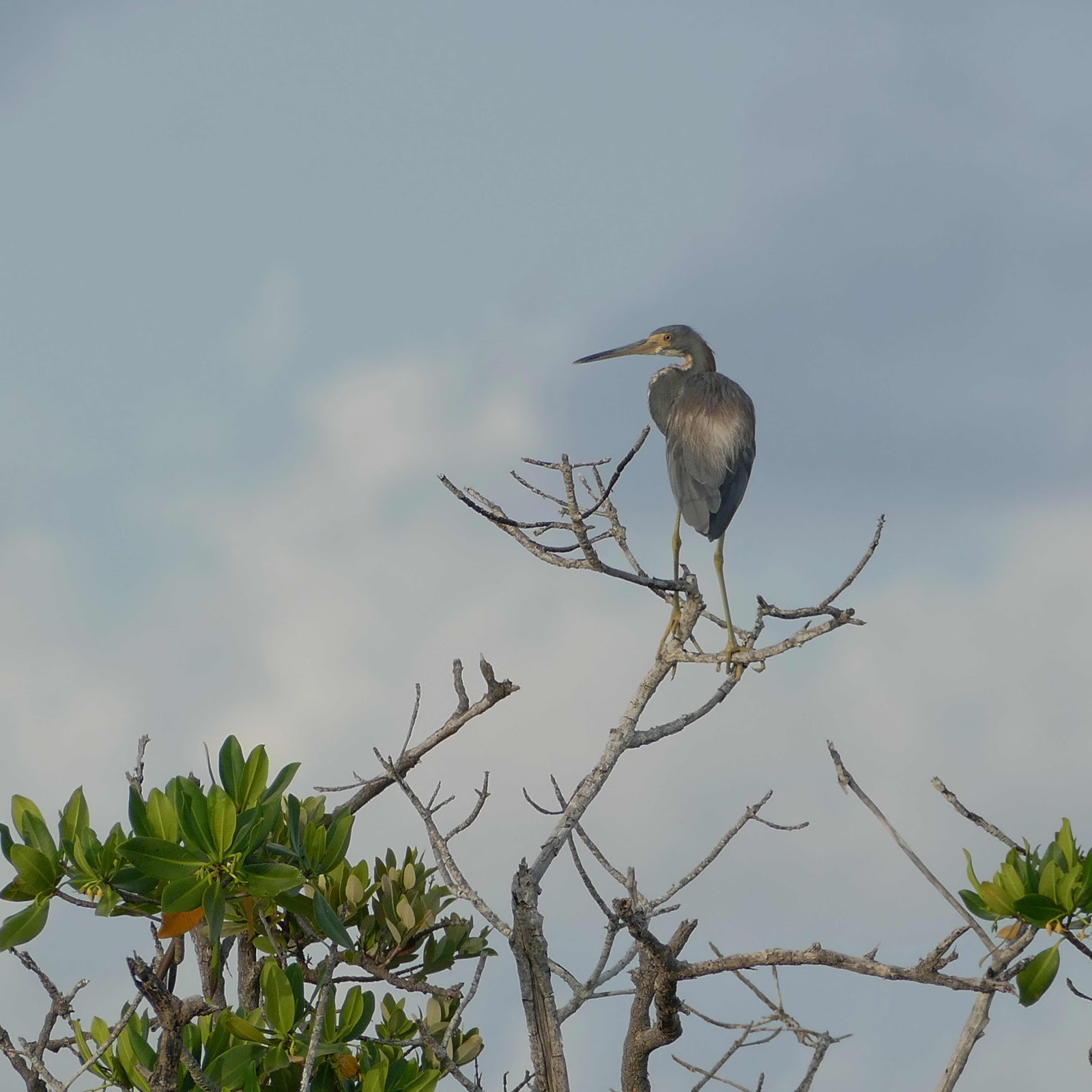 Rusty is handling the chaos quite well. My previous dogs have got stressed by the obvious changes.  I think Cheyenne got dumped at the pound before her former family moved. When we prepared to leave our home on Ramrod Key she got really anxious and I couldn't be out of her sight for a minute until she realized she wasn't being dumped again. Rusty just keeps on as normal as furniture moves and boxes come and go. I like to think he knows how important he is to us. 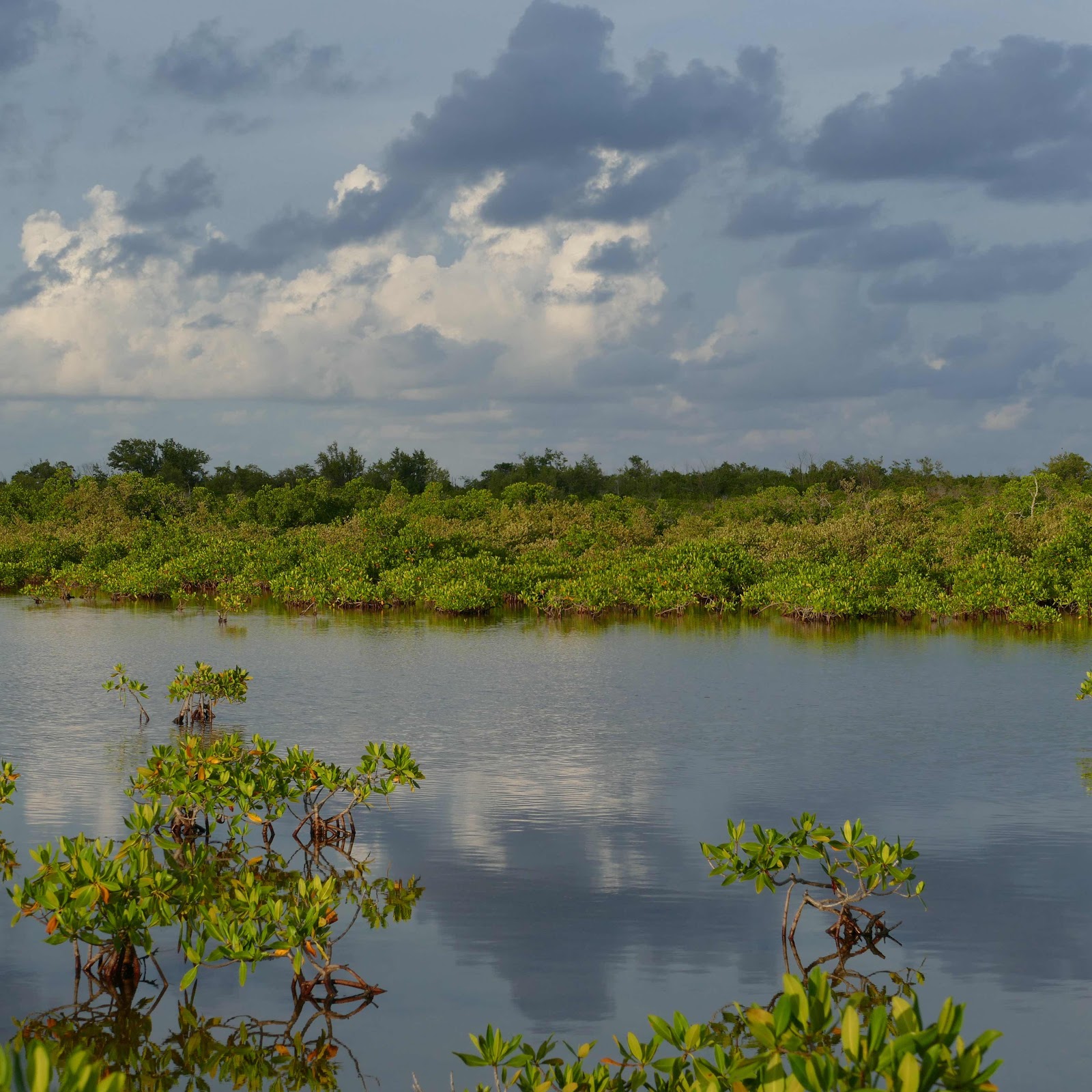 A new city policy has been announced requiring employees to be vaccinated or to get a weekly PCR Covid test at their own expense. I sent in my vaccination certificate to HR as I am technically on the books until October but I know several of my colleagues are determined anti-vaxxers. That's one of the reasons I'm getting out before Fantasy Fest. A vaccinated Monroe County Commissioner for the Upper Keys died recently after getting the disease that some people call a  hoax. In his obituaries Mike Forster is described as a powerhouse of good, organizing help for the needy in his community and acting like a true leader. I find it deeply disturbing he got the Johnson and Johnson vaccine and still suffered a fatal breakthrough infection. 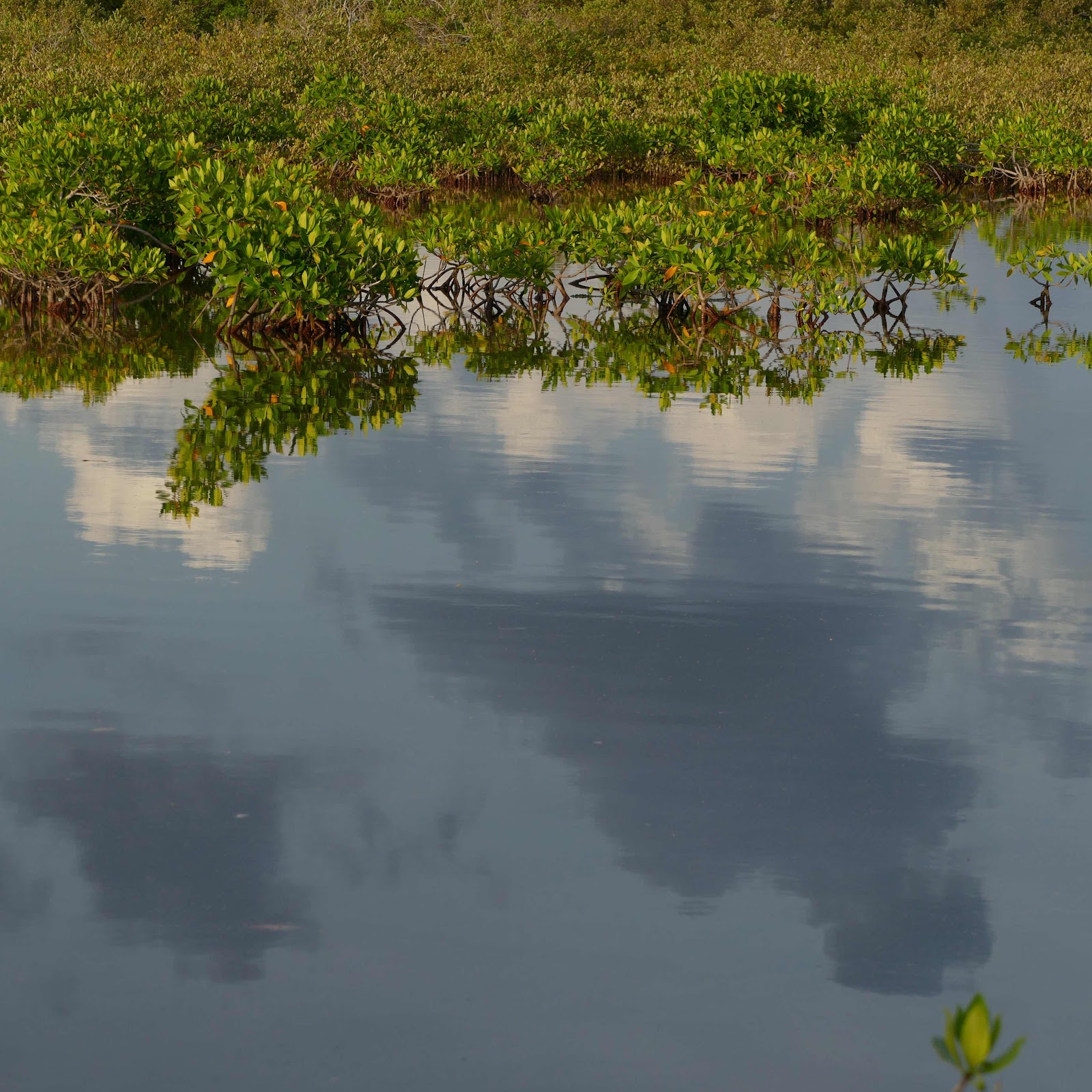 I can't stand the idea that there are swathes of people who can argue with a  straight face against vaccination however I have opted out of the drama. Our plans when we are on the road is to get take out food kerb side, eat in the van and avoid contact as much as possible. At this point we have to patiently wait for Covid to burn itself out because apparently we as a species don't want to help it along. 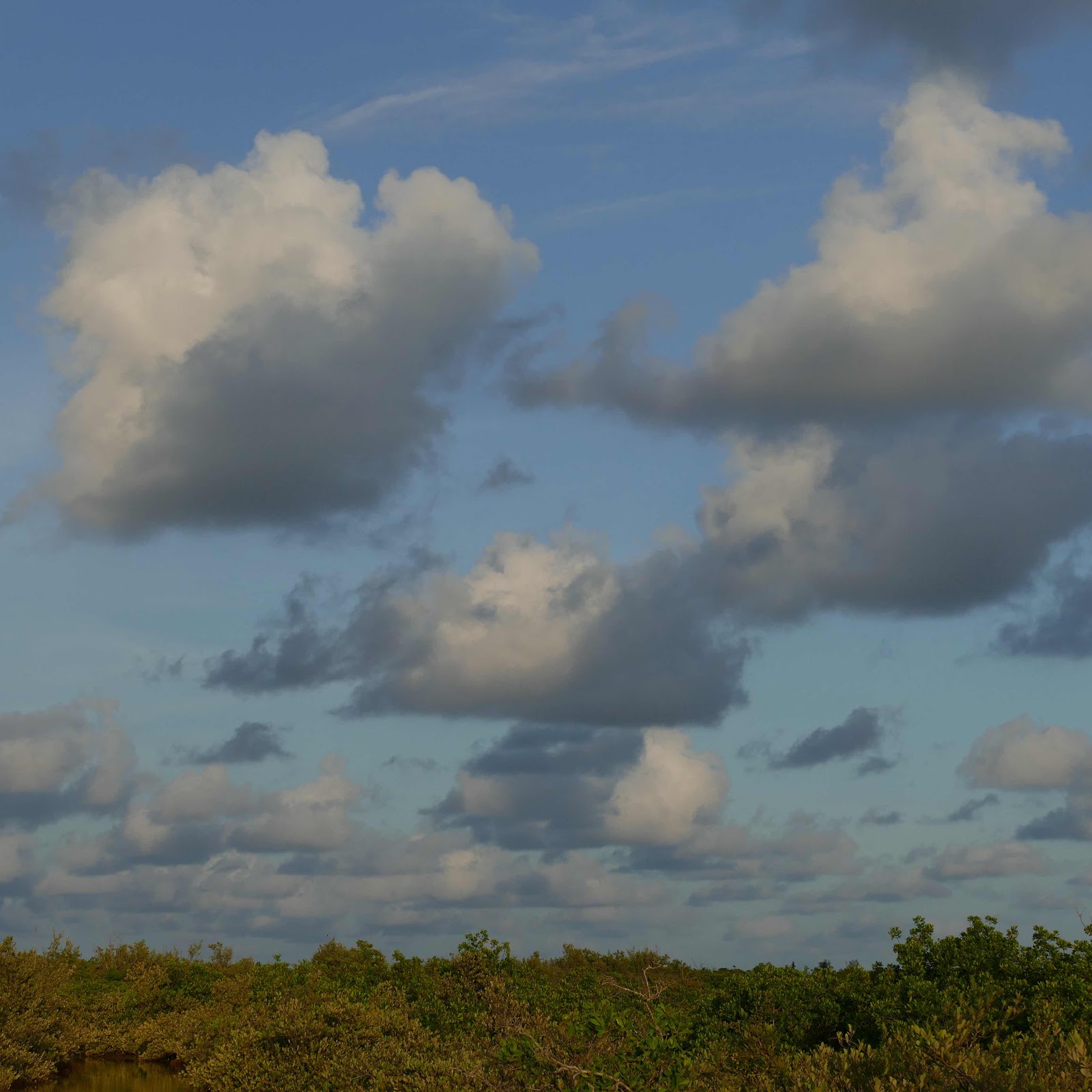 The weather this September has been lovely so far, yes too hot but also breezy and pleasant. I walk Rusty before dawn and I don't sweat so that's a win. I find it ironic to a degree when I see parts of the country knocked down by hurricanes, tornadoes wildfires and drought while South Florida trudges on as normal pretty much. 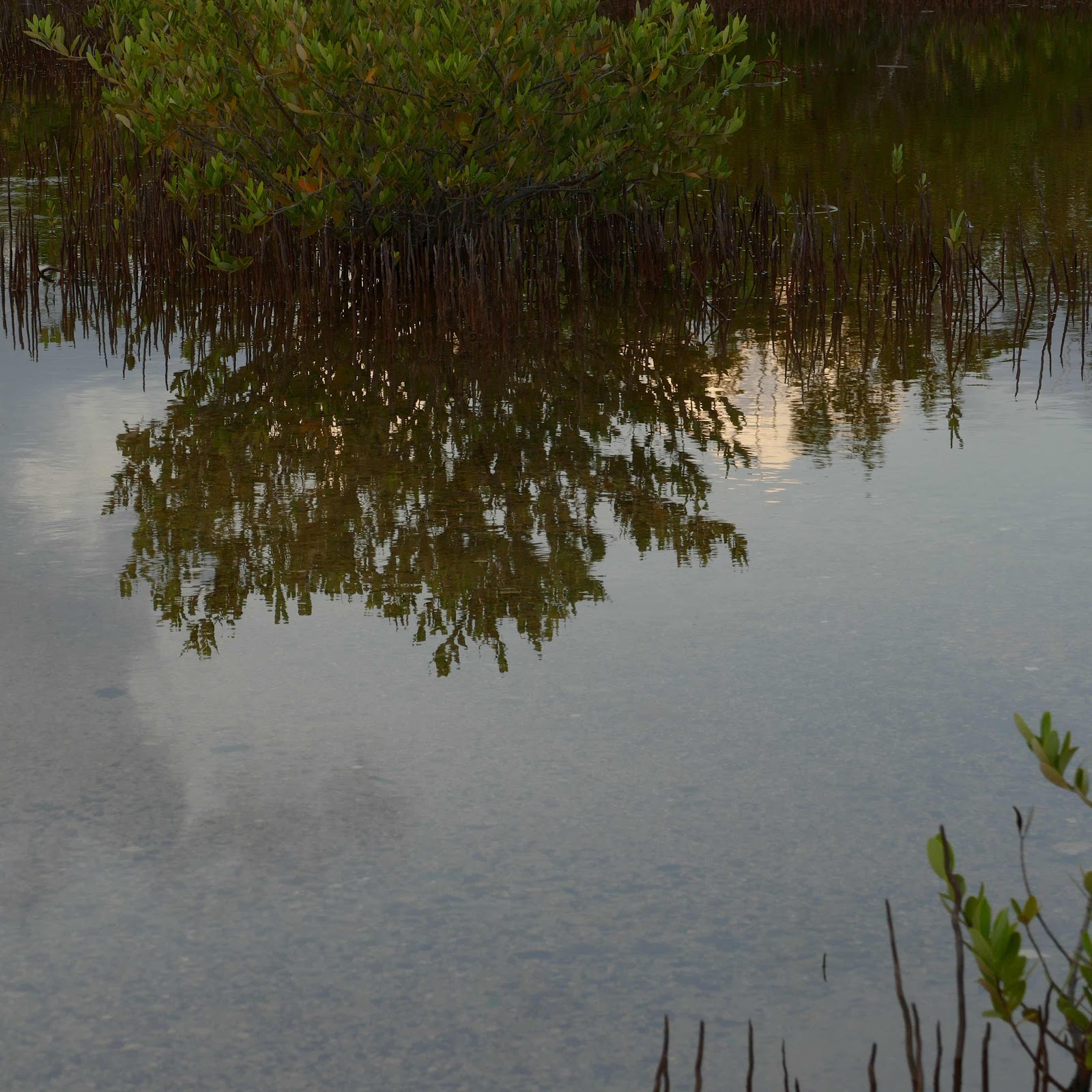 The summer skies are gorgeous with clouds and storms, the colors of the leaves are bright  and I am enjoying the peace and quiet of ultra low tourist season. As seen here: 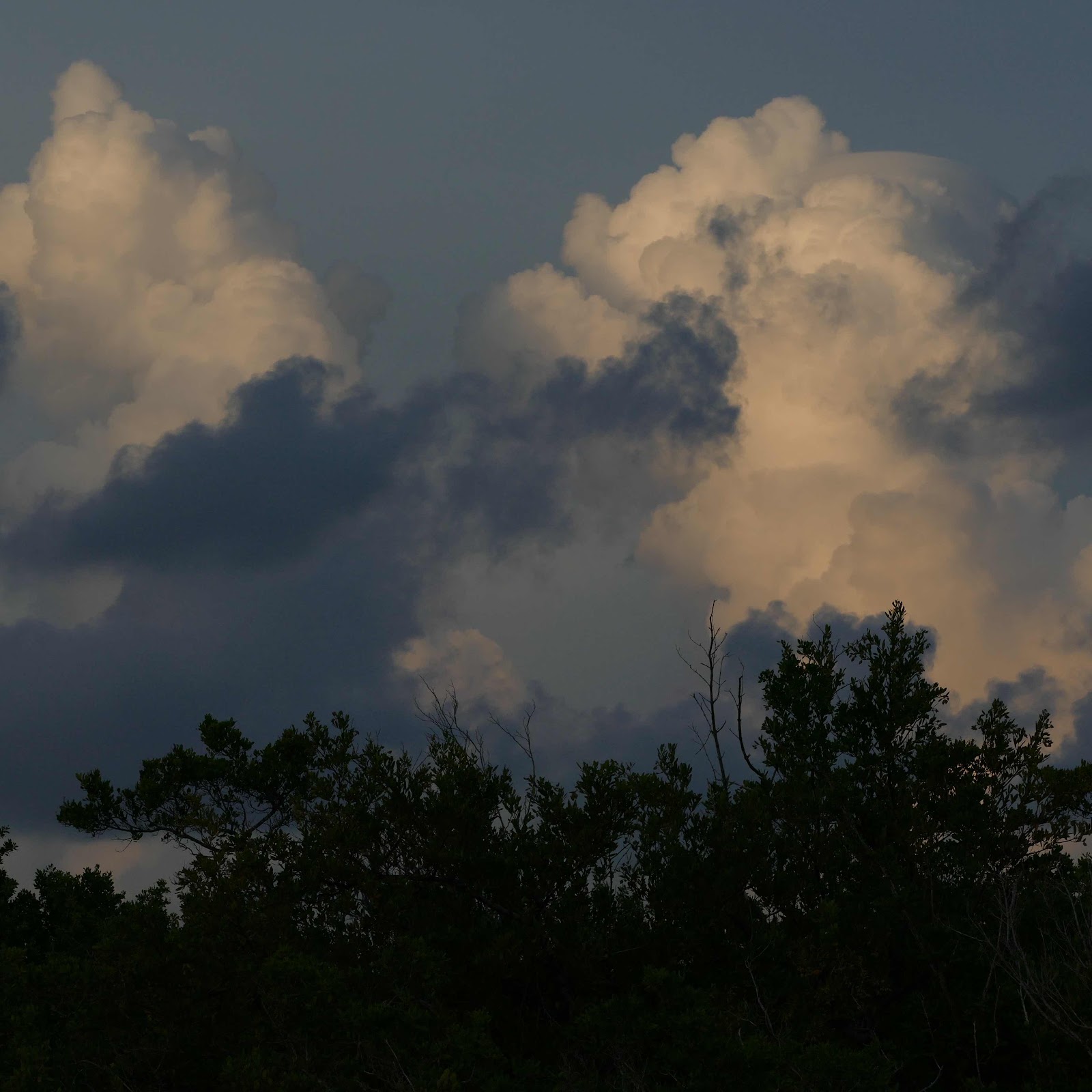 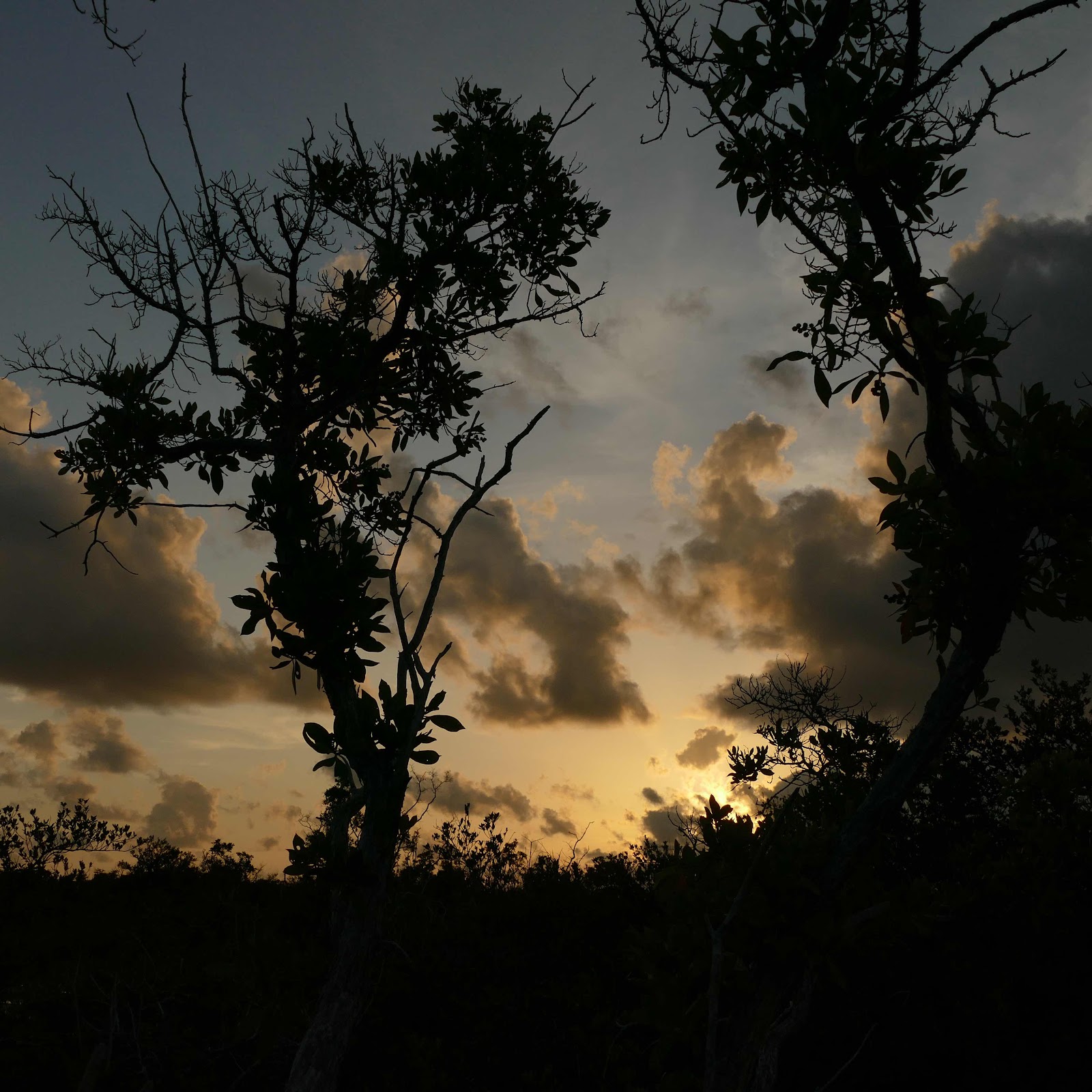 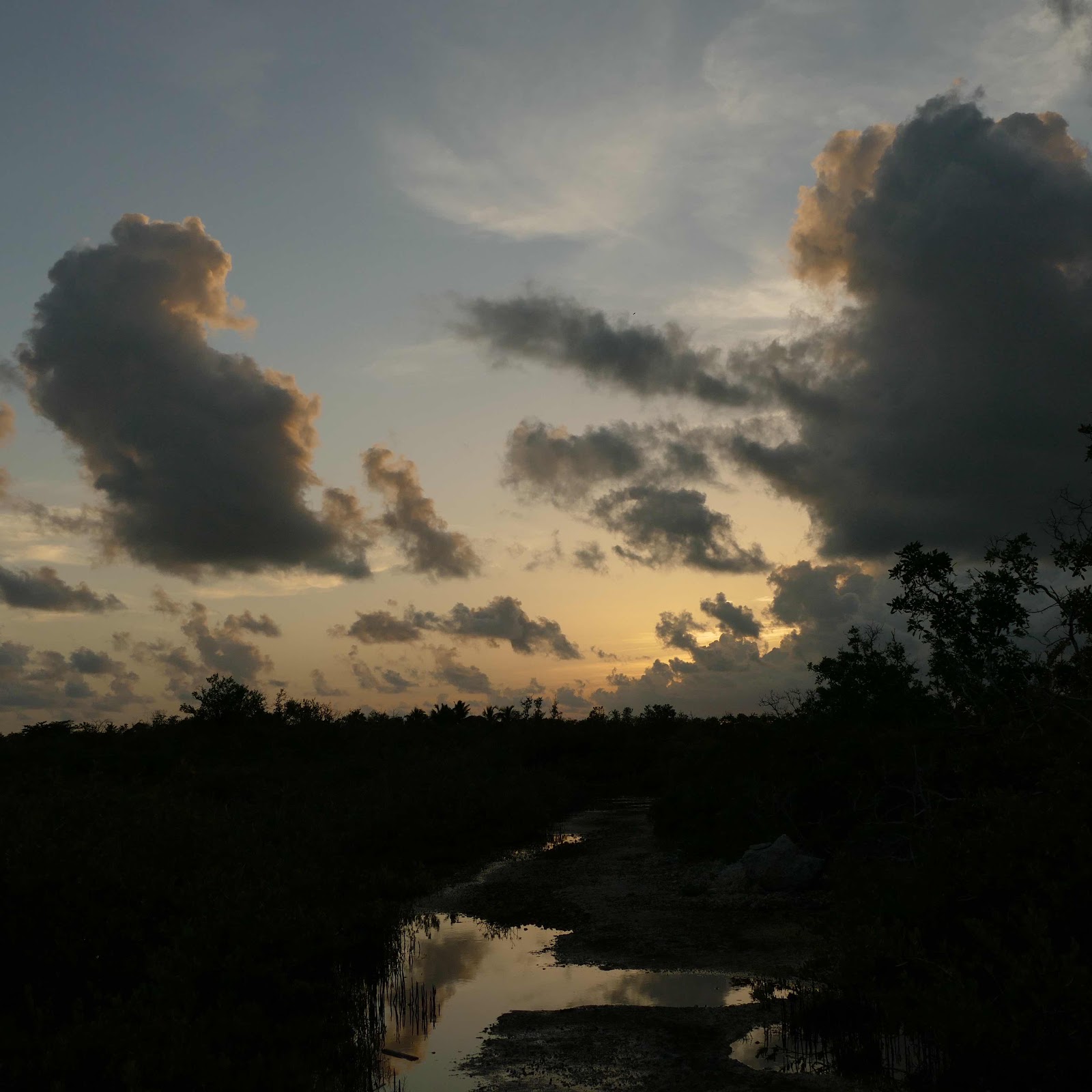 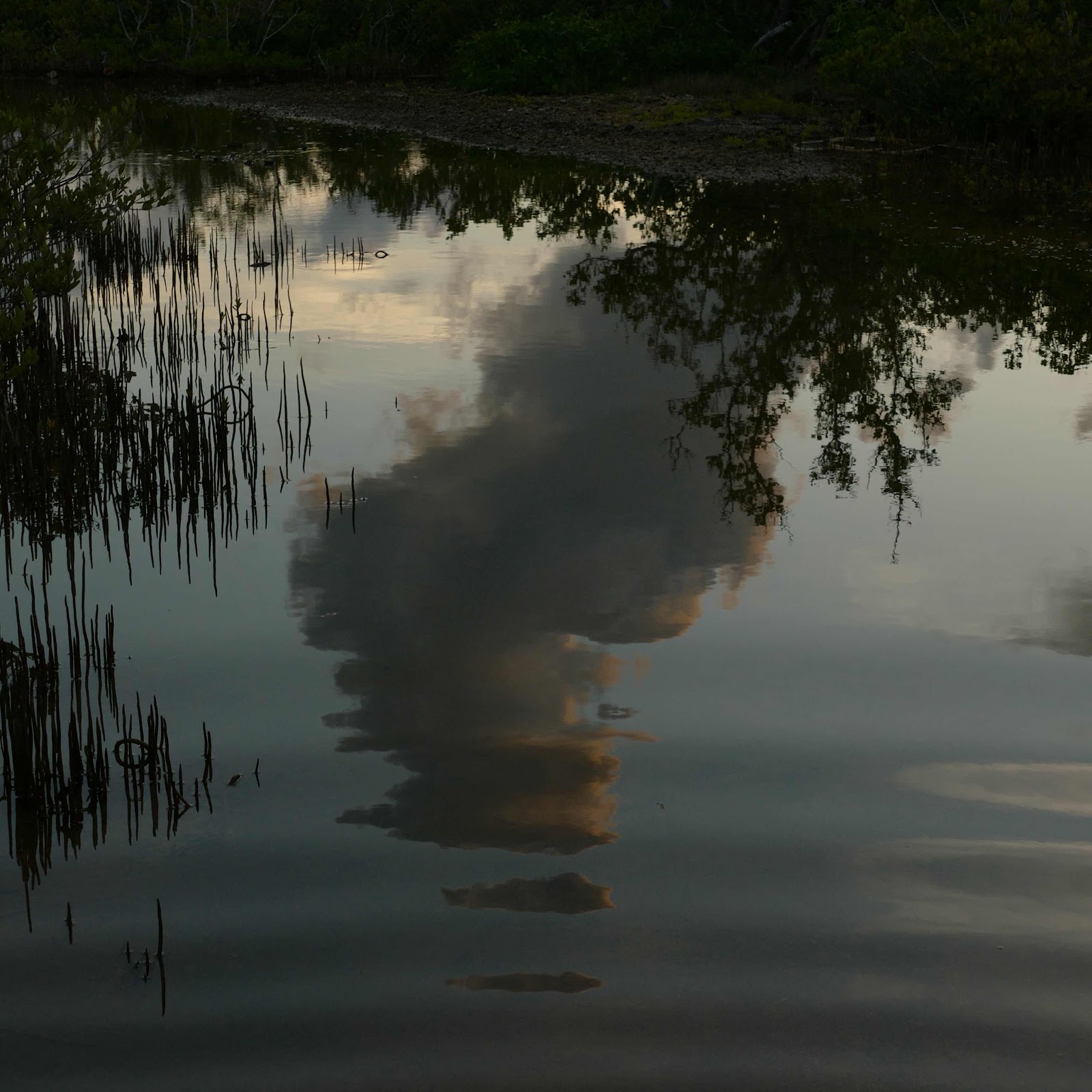 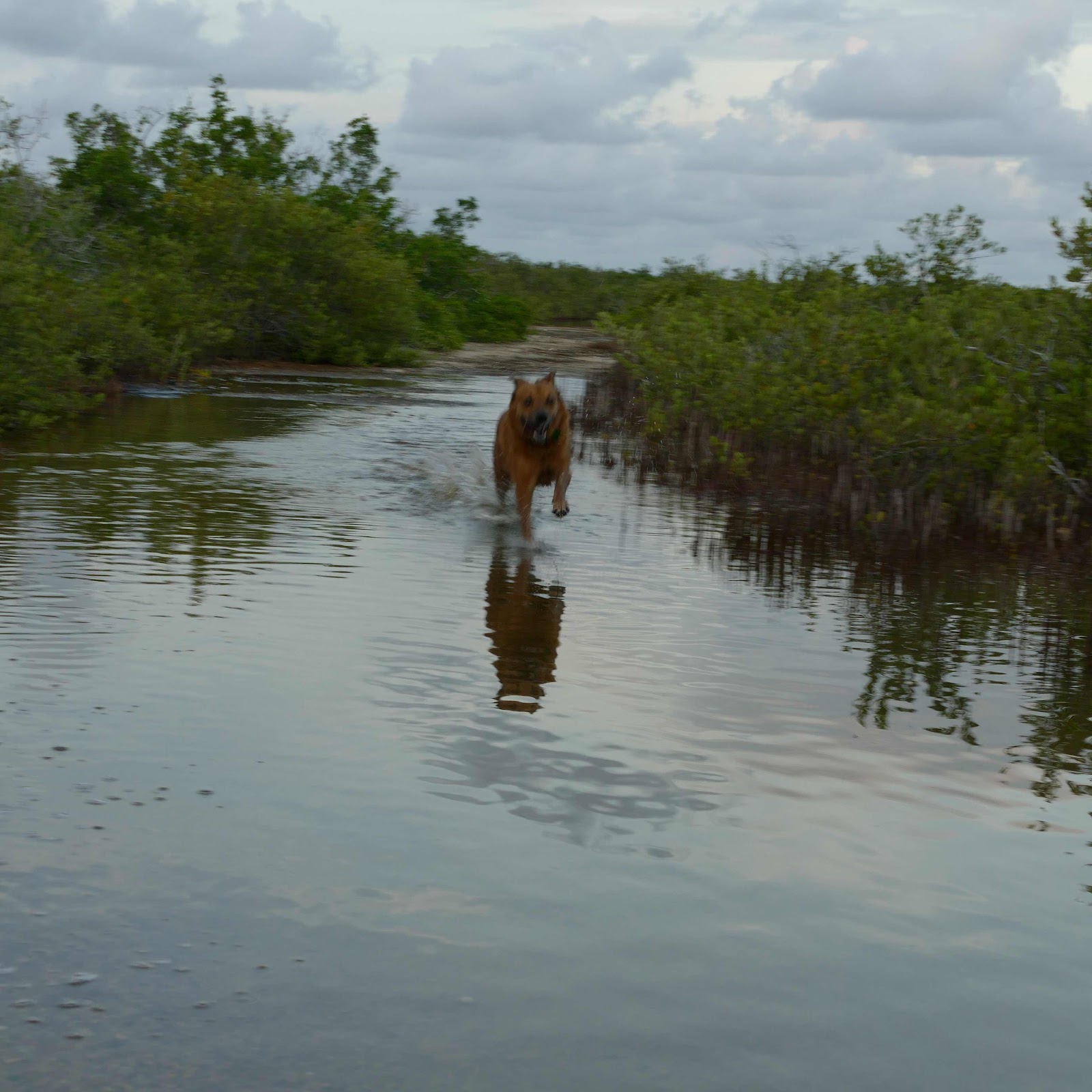 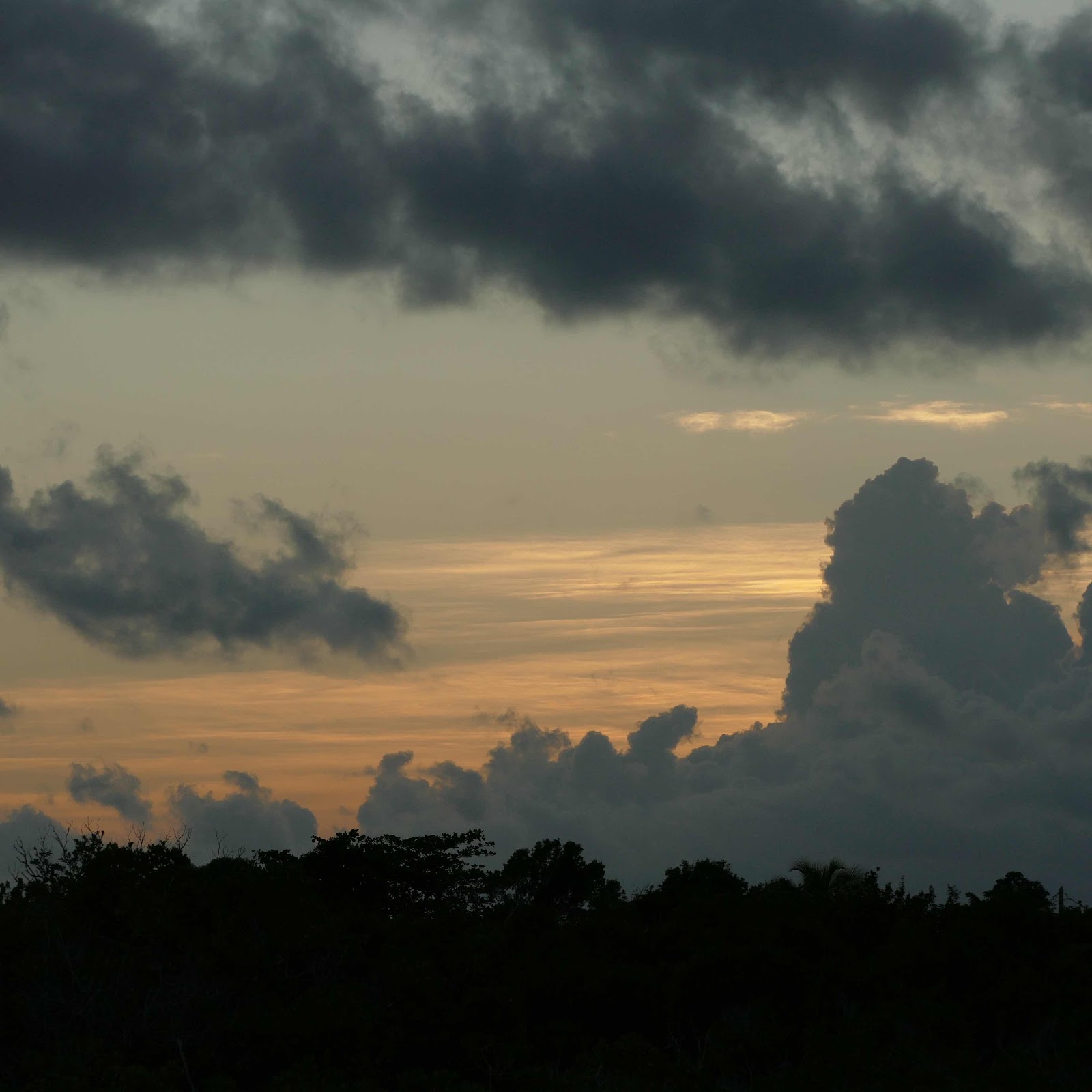 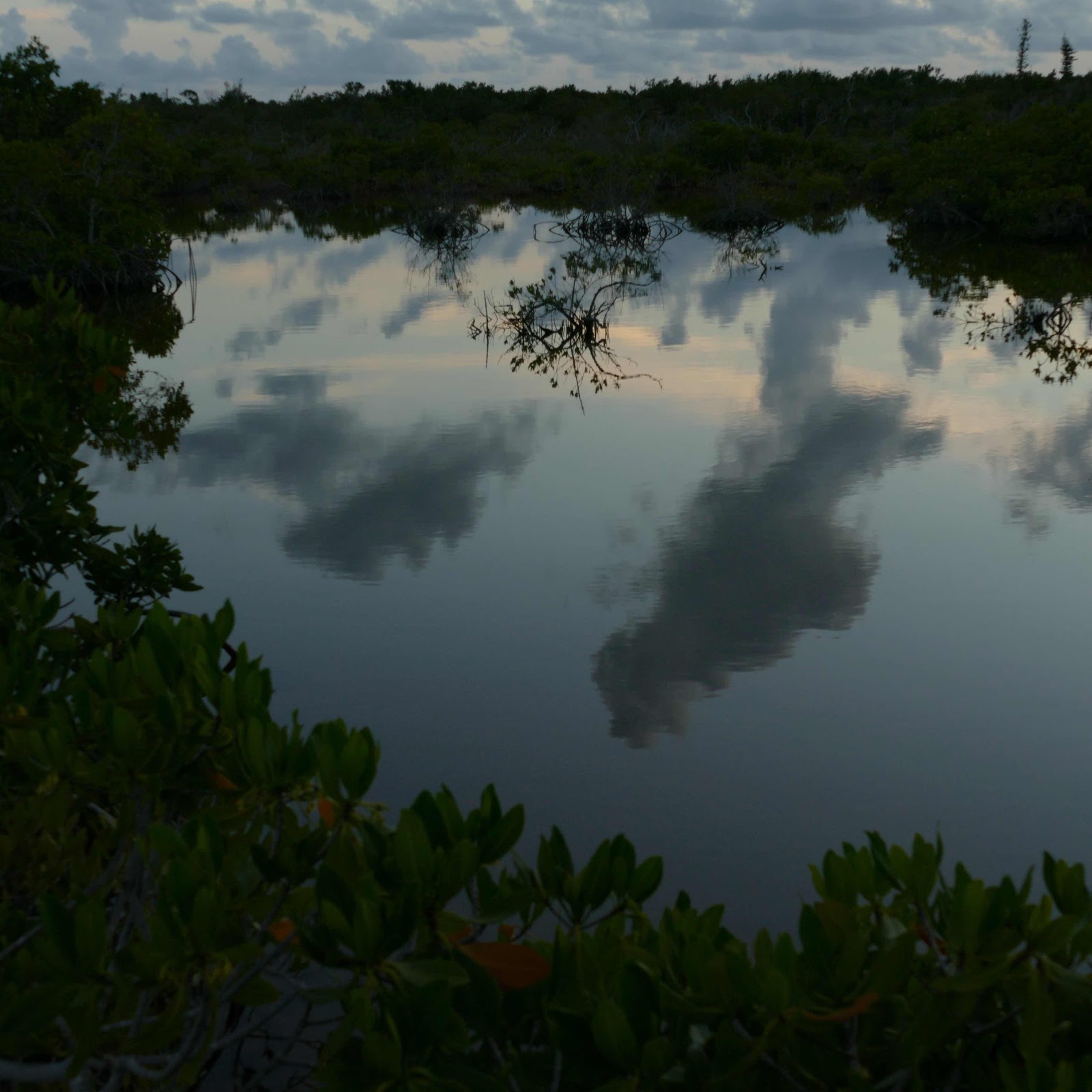 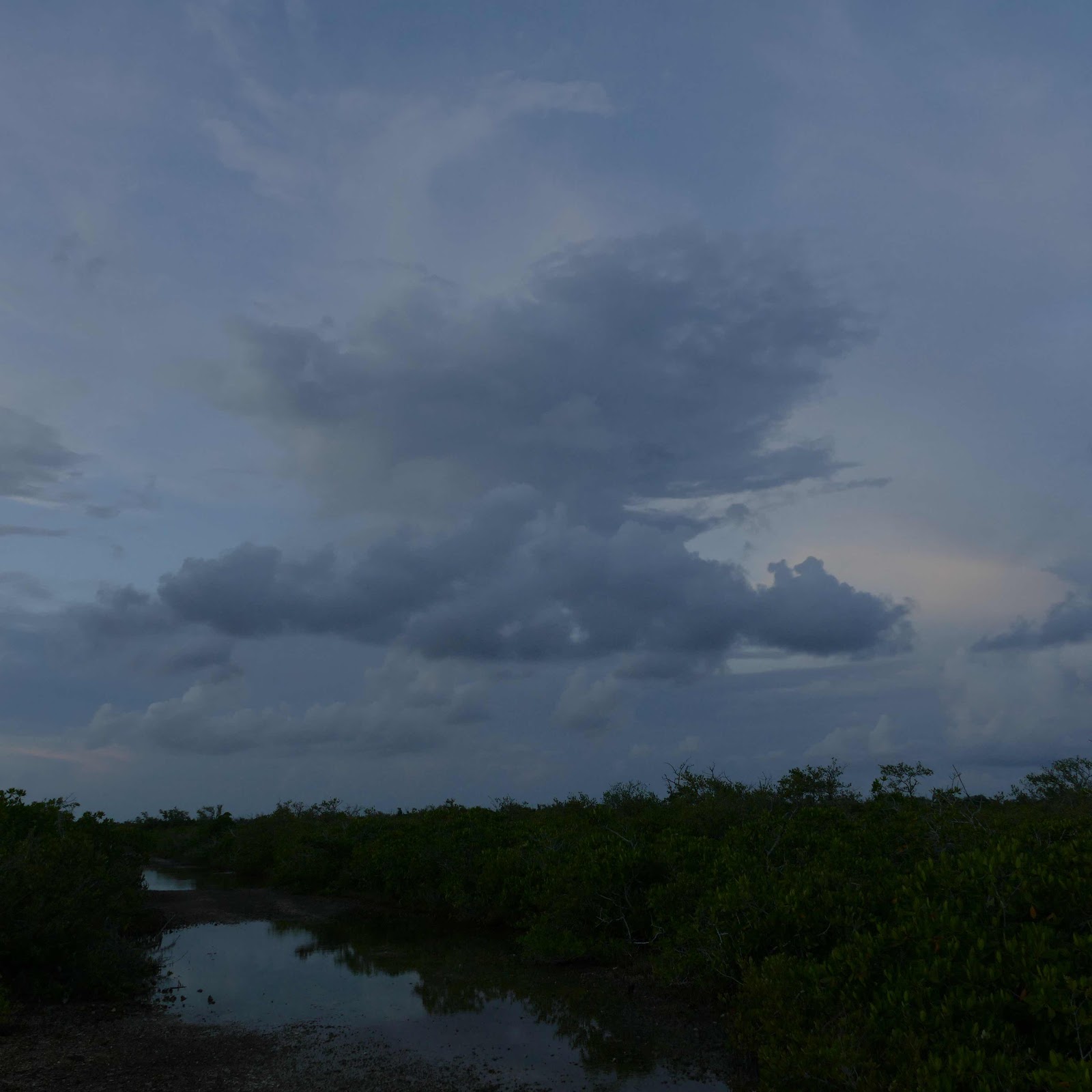 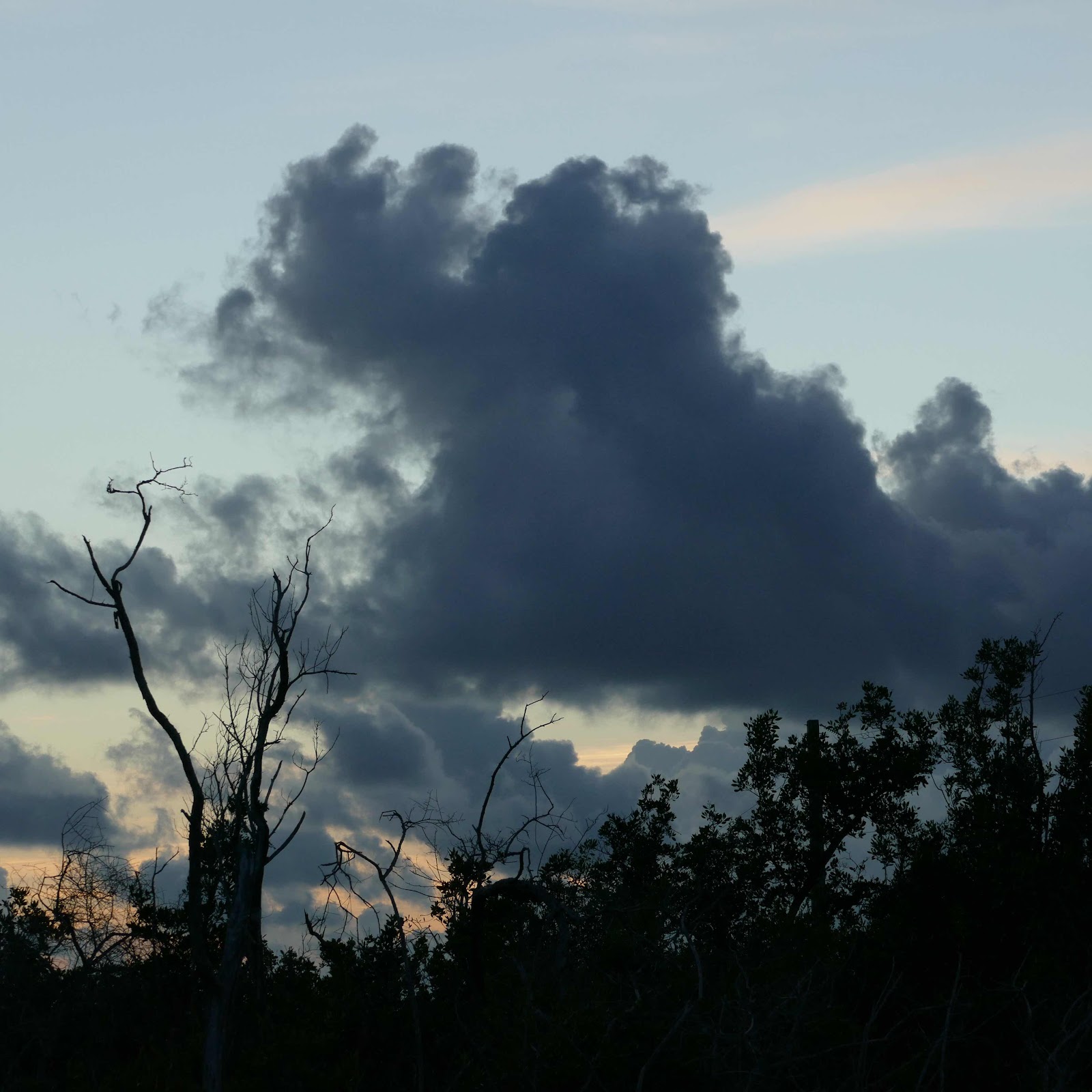 Dusk in the woods with Rusty. Perfect. Not a moose in sight. 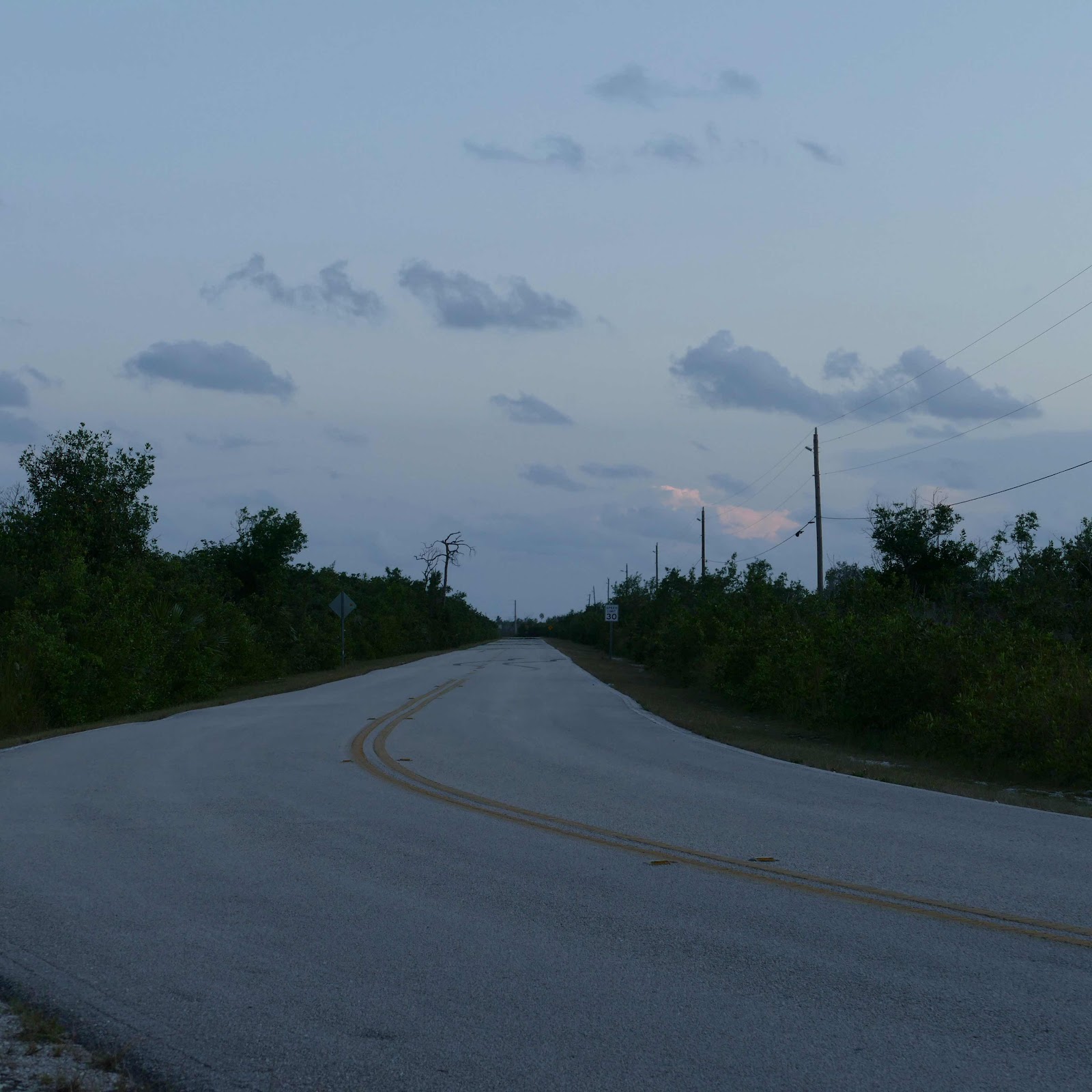