Robert was on a nostalgia  kick yesterday, so despite some setbacks we had a great time buzzing around the back country in our little boats, each meditating and ruminating as we sped across the water individually, talking when our paths reconnected on land. Robert and Salty Dog at 23mph crossing Cudjoe Bay: 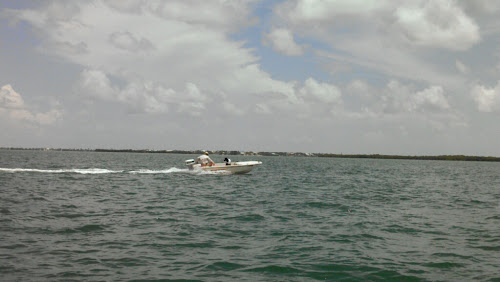 The stilt houses, typical of the shorelines around here. What you can't see is the massive influx of people in the Keys this week for the Great Lobster Kill today and tomorrow, known as mini season. 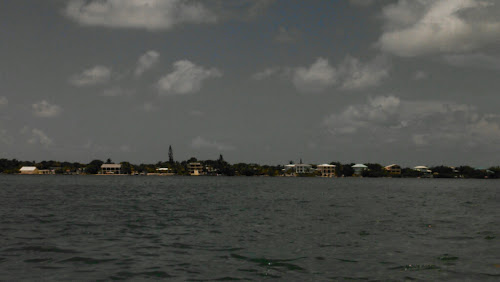 Niles Channel Bridge arcing gracefully 40 feet above the water. I used to come out here quite often when I lived on Ramrod as this is a wide, deep, and direct path to Tarpon Belly Key. 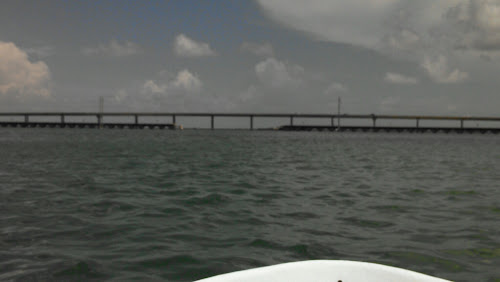 Once under the bridge we turned west and aimed for the buildings which on land line Highway One. We had to get fuel...after a fashion. 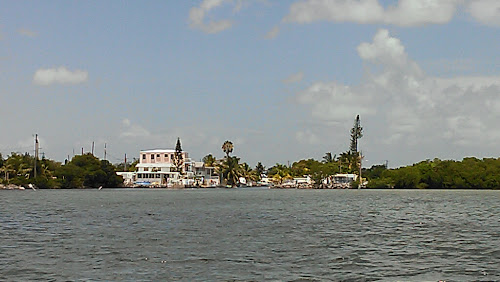 Robert had proposed  a pause in the proceedings to take lunch, I seconded the  motion so we stopped at The Wharf on Summerland Key for lunch. 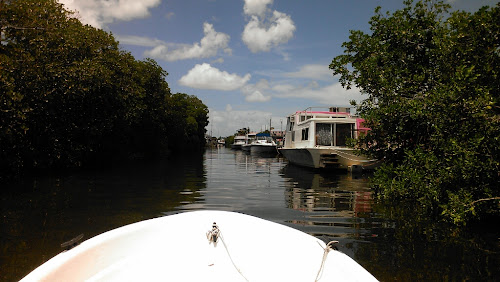 The Wharf offers an organic menu of food and drink and while I stepped out and tried the tamales, well worth while, Robert took his default position and went with the cheeseburger, which seemed to hit the spot: 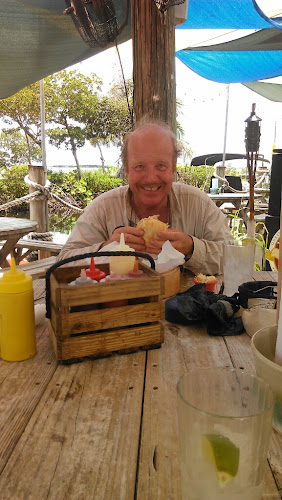 Salty Dog was perfectly behaved lounging in the shade with a giant bowl of iced water. We lounged, it was hot. Yes,. I know I enjoy heat but it was hot. Robert was in charge of navigation, only until I explained I used to do this trip quite a bit up Niles Channel. 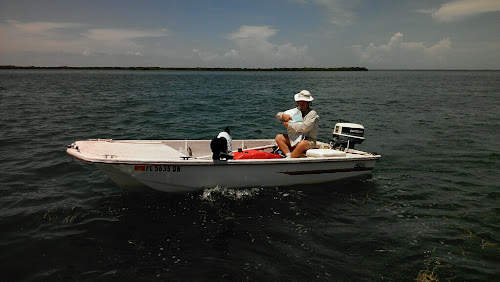 The bridge was looking good. I love that arch plus you get  some excellent sunrises from the top. 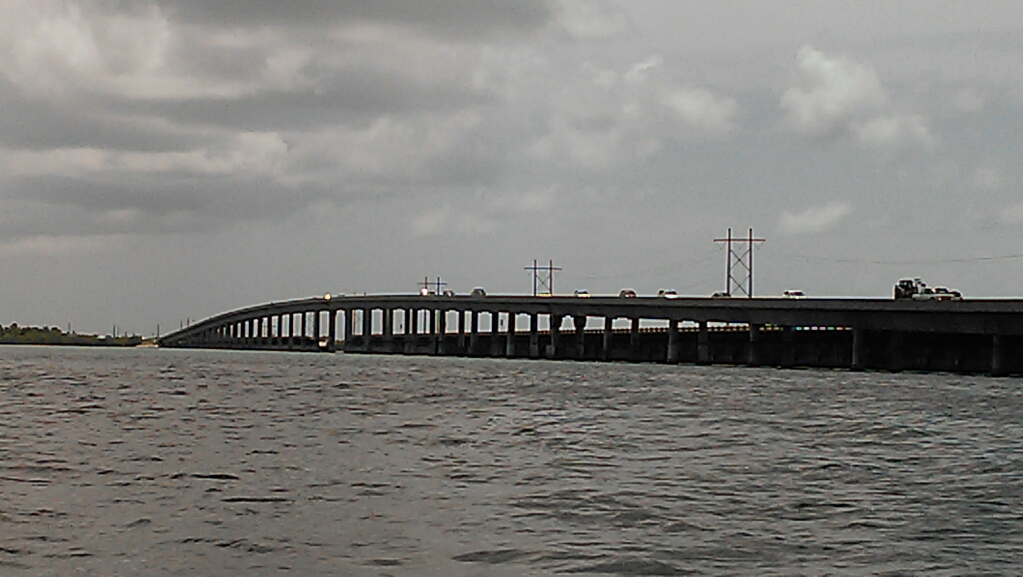 We resumed our separate paths running smoothly  across the dark blue waters. I have the more comfortable boat with a center console on my Dusky and  a wheel to steer by, while Robert was giving himself a Popeye arm as he put it working his tiller steering at speed. I took the time to meditate a bit as we drove in a long straight line up the channel and I started to wonder, as one does, why Homer called his seas "wine dark," a phrase that has become as famous as it is puzzling. I have never sailed a sea that I could have confused for a glass of wine but scholars have discussed this subject at some intricate length Lapham's Quarterly. 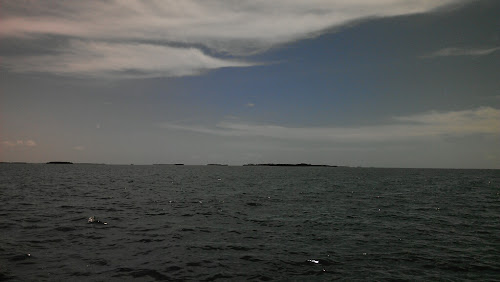 The image Homer hoped to conjure with his winelike sea greatly depended upon what wine meant to his audience. While the Greeks likely knew of white wine, most ancient wine was red, and in the Homeric epics, red wine is the only wine specifically described. Drunk at feasts, poured onto the earth in sacred rituals, or onto the ashes around funeral pyres, Homeric wine is often mélas, “dark,” or even “black,” a term with broad application, used of a brooding spirit, anger, death, ships, blood, night, and the sea. It is also eruthrós, meaning “red” or the tawny-red hue of bronze; and aíthops, “bright,” “gleaming,” a term also used of bronze and of smoke in firelight. While these terms notably have more to do with light, and the play of light, than with color proper, Homeric wine was clearly dark and red and would have appeared especially so when seen in the terracotta containers in which it was transported. “Winelike sea” cannot mean clear seawater, nor the white splash of sea foam, nor the pale color of a clear sea lapping the shallows of a sandy shore. 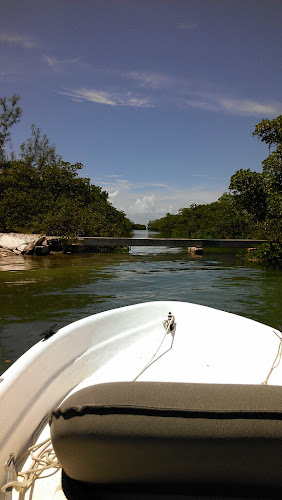 Enough of this existential rubbish, we arrived at Tarpon Belly Key, but this time from behind. I got to see part of this island (technically three islands as it is cut across by two canals) I had not seen before. I usually land on the west facing  pebbly beach but this time we draped our anchors over the horizontal cement bridge support still solid, still in place across the mouth of the easternmost channel. The interior of the middle island was as wooded as any trail I've walked in the Keys: 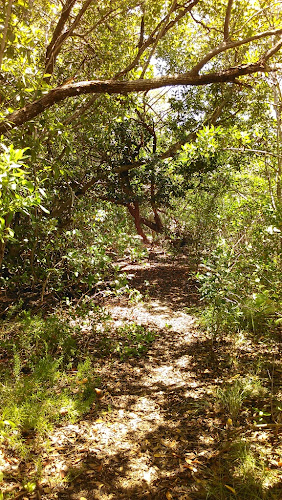 With a big smile Robert found the rusty remnants of an axle and an engine block of a truck used to shuttle supplies across Tarpon Belly when the island was operating as a shrimp farm decades ago. Robert knew a guy who once drove this: 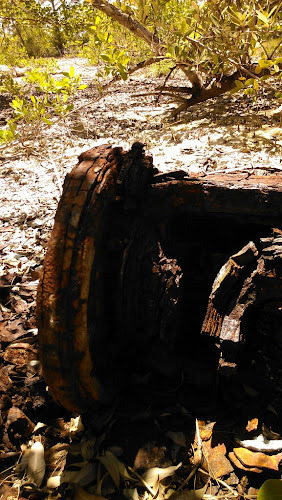 Today is opening day of lobster mini season, a two day slaughter designed to allow recreational anglers a chance to score some Florida lobster before official commercial lobster season starts next month (and continues into the Spring). Commercial lobster season is a pain from a navigational point of view as lobster pot floats sprout like toadstools in all near shore waters and commercial trappers maneuver their boats like un-muffled tractors at all hours, backing and forthing to check their traps, but mini season is torture for local residents. 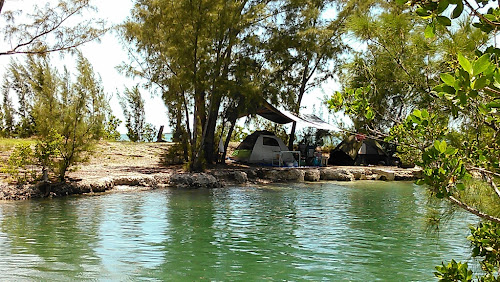 Mini season is a boost for local businesses so as much as residents moan its never going away but it attracts a huge proportion of yahoos, people who have forgotten any manners they may have had before they were lured here  by lobster. There are rules (no hunting in canals or near shore) and the body of the lobster must be at least three inches long and not a female carrying eggs. Astonishingly enough law enforcement find numerous violators. Mini season is chaos. I don't think their laundry lines enhanced Tarpon Belly, frankly. 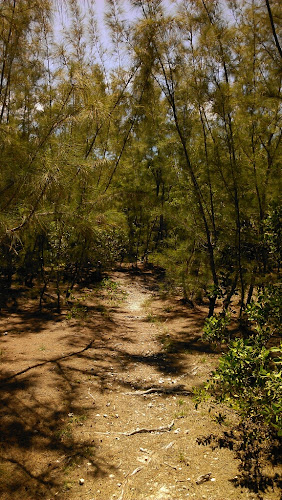 Our side of the island was silent and empty as we strolled around in the appalling heat following frisky young Salty Dog on his explorations. Our anchorage was perfect as the current was flowing south out of the canal holding our boats away from the cement. 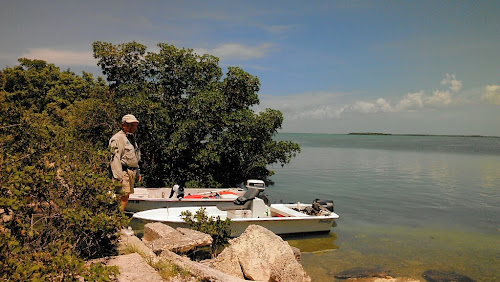 Looking west, we crossed the bridge and walked on the easternmost island, a place rich with other memories for Robert. 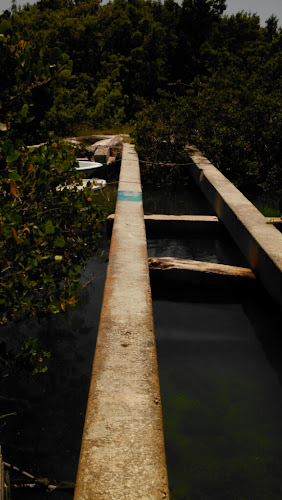 "I last walked here 35 years ago" he had remarked as we landed. Now he eagerly led me through the undergrowth to another spot he hadn't seen since he was last here in his twenties with two buddies. We had fun, Robert said with a  twinkle in his eye as he told me about their exploits at a time when few people came and hung out here. 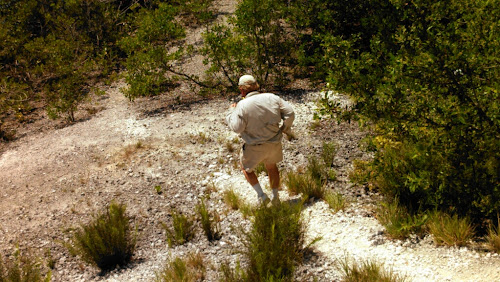 Yes we climbed the mountain of rock and gravel, we estimated it easily at 15 feet high, as high as the tallest point in key West, Solares Hill.  Above we see Robert descending, rather inelegantly like a skier on one ski, while I stayed on top in the rarefied atmosphere of the death zone because I discovered my Verizon phone got two bars here at the summit and I could send my wife in California an actual picture of the view across Tarpon Belly Key. 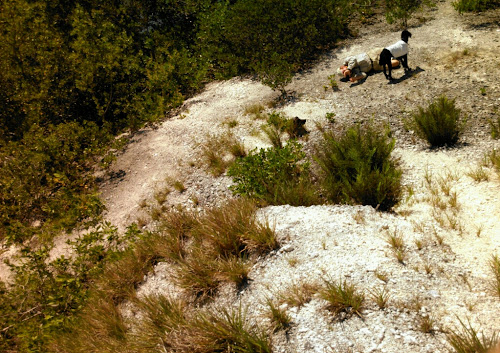 You decide if the view was worth the effort. The Himalayas weren't in it. And there we see Fat Albert the blimp keeping an eye on things in the Florida Straits. I was slightly surprised I still had to look up and tjhat the blimp wasn't  flying at my eye level. 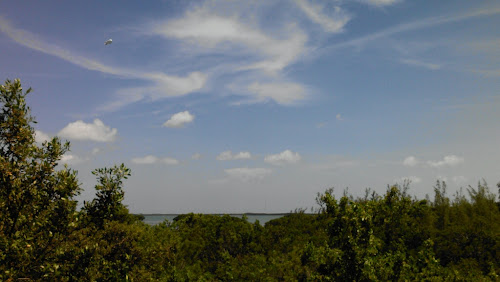 After I scrambled down, wishing someone made crampons for Crocs, I noticed I could still see fat Albert from our improvised dock. Honestly I think the view is slightly better from here. Which detracts nothing from our mountaineering achievement. Salty Dog went up and down twice, without I should note, the assistance of supplemental oxygen. 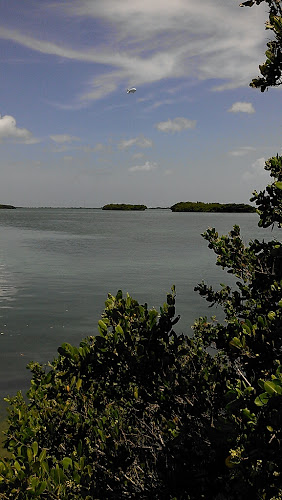 We dropped our mountaineering identities and got back in the boats. Robert did Important Things with the waterproof charts while I stared vacantly back at the island trying to discern, in vain, the location of the mountain amongst the foliage. 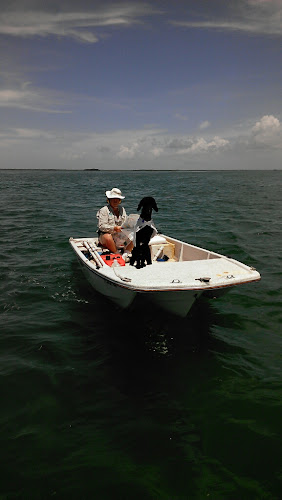 I am tempted to draw a discreet veil over the rest of yesterday's activities but I have to confess that at a point not too far from Robert's place my engine conked out. Again! Grr! We towed a bit and sometimes it ran for a bit so we planed a while too, so we got back to Robert's dock in good order if quite a  bit late. 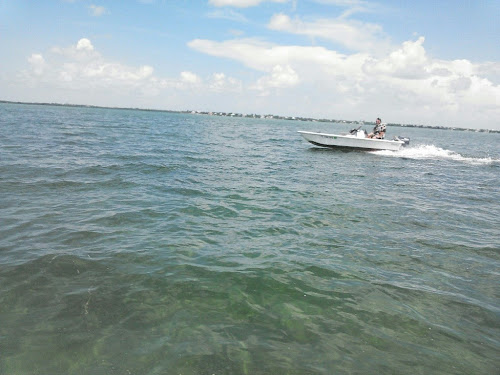 We fiddled with it for a while in the appalling heat, and I left it ultimately at Robert's with plans maybe to give in and taker it to a rather good Yamaha mechanic I have used previously. "Something electrical" Robert opined, so we shall see. 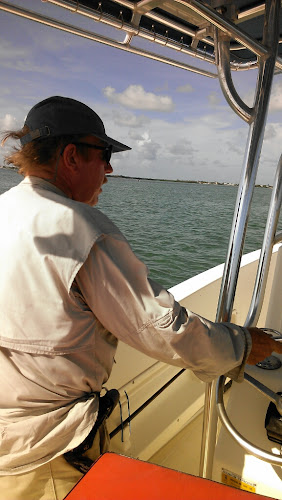 I ended up  on Robert's power  cat getting a  ride home - again - but it was in all respects an excellent day of exploration. I barely got a nap before I had to go to work.  But that was another adventure.