Last week was National Telecommunicator Week and our bosses let us work in street clothes. Our uniform requirements aren't too stringent, a polo shirt with a police logo on it (which makes standing in line at the convenience store on your way to, or from work a little awkward) non cargo pants and closed toe shoes. However last week saw shorts, plaid shirts, tie dyes and sweat pants, not all at once, but I have to say I enjoyed the momentary informality, even though uniforms make life simple in the long run. No bad sartorial choices can be made when in uniform. 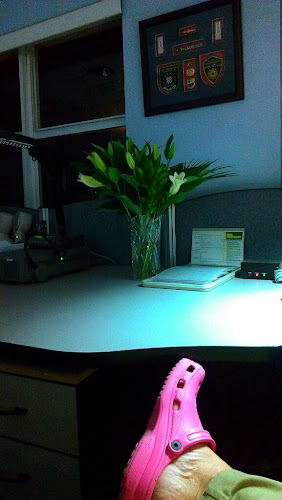 I don't feel the daily stress of answering 911 calls or trying to hold radio conversations with muffled police radios, with officers in crowds, or radio microphones joggling on lapels while the officer has a dozen different things on his/her mind in the middle of the street. At the end of a long week though all I want to do is sleep, which suggests to me that I do tend to get a bit wound up. The three of us last Saturday morning were ready to be catapaulted from the room to enjoy a weekend off. Shannon had read somewhere that too much sitting down will kill you so periodically she makes us get up, Nick and I, which was how I caught her standing and typing while I waited for her words to reach my computer so I could dispatch the officers. Happy Telecommunicator Week! It was nice to be remembered but life, and it's failures, go on even in Key West.

"Key West Nine One One. What's the address of your emergency?" In emergency response, Key West is as modern as anywhere and I'm going to guess our callers are grateful we are up to speed. 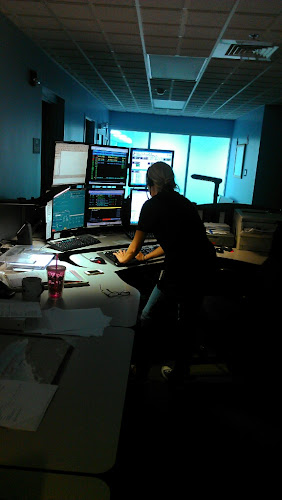 Tonight the city commission meets at six at Old City Hall and will supposedly put its final seal of approval on a noise ordinance that some Old Town residents say will be a life saver, while others say it will kill jobs. Gentrification they say is killing Key West.

Imagine my surprise when I came across this newspaper article from 25 years ago, same exact issues, same people, same fears: 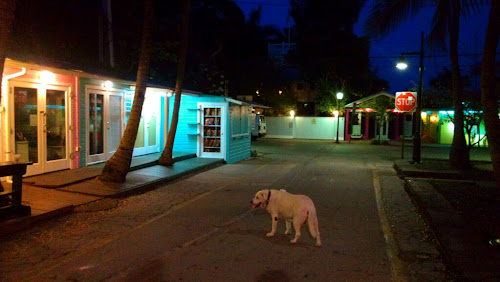 The same Pritam Singh mentioned is raising this 98 room hotel on Caroline Street and it's construction will have a few knock-on effects for gentrification. The city is planning to beautify Caroline Street to complement the hotel and merchants say bike paths and planters will cover their storefronts and reduce the flow of customers into their stores. Fear is pervasive in Key West as change ripples through the city. 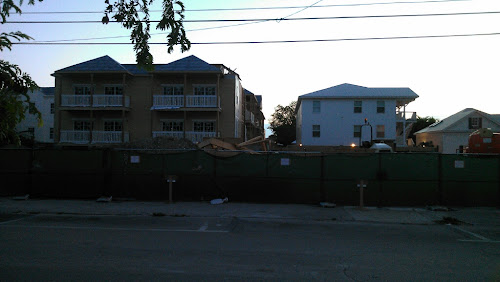 This discussion, Key West with One Regret is a thoughtful nostalgic and wistful look back at the author's arrival in Key West and evolution through the changes of the last few decades. He laments the changes then offers his services as a realtor to help along the process he regrets. It's a measure of Key West's resilience that things change, amid much lamentation and yet those that lament loudest profit most from the changes even as Key West manages to hold onto enough charm to draw in more visitors and more money. Gentrification simply means new people will come to Key West and make new memories. Some of them will come to the mud pit that is currently the hotel being built and make memories of their own. I suspect this structure will put the future of the Schooner Wharf next door in some doubt, as a bar with loud music doesn't mix well with an upscale resort. The waterfront property would be good for the hotel though...and I doubt I am the first to have figured that out! 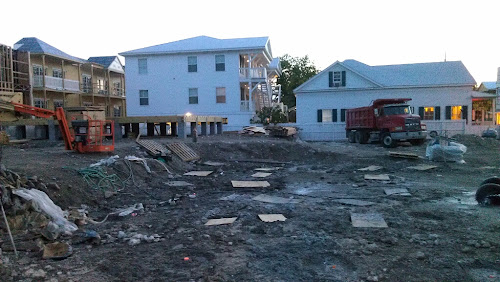 For some time now gentrification has been equated with a smaller gay community, as suggested in 2005 in the New York Times article Is Key West Going Straight? 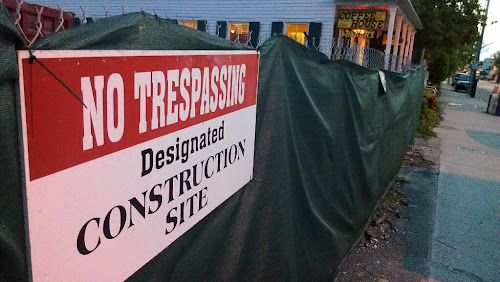 It is undoubtedly true that Key West is less gay than it was a while ago. I believe part of that is due to high costs of living pushing away the next generation, gay and straight. Which means mainland gay destinations are going to attract people who would have previously thought of coming to Key West. I think that Key West's attraction as a gay destination has shriveled even as gay acceptance has flourished across the US. I mean, Key West is hardly unique anymore in a country which has largely moved past gay rights as being "special privileges." Those that feel that way are hold-outs on the wrong side of history, so being gay is no longer unusual or special in most of the US. Key West needs to find a new shtick. 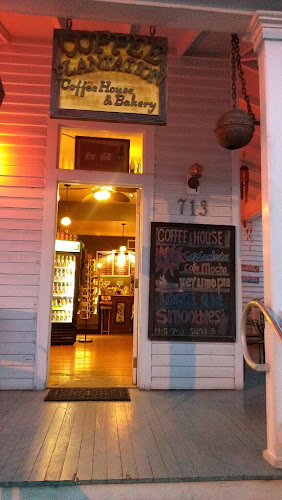 The struggle to maintain Key West's elusive character is constant. From two years ago, by a reporter who came to town only briefly and then left, this story about charter captains pleading for the waterfront to keep its special Key West flavor. Fishermen: Don't gentrify the Bight | KeysNews.com. Yet the irony here is that thirty years ago the Key West harbor was filled with smelly commercial shrimp boats that were edged out by amateur sailors and charter captains catering to rich amateur anglers...who now are the red blooded essence fighting gentrification! 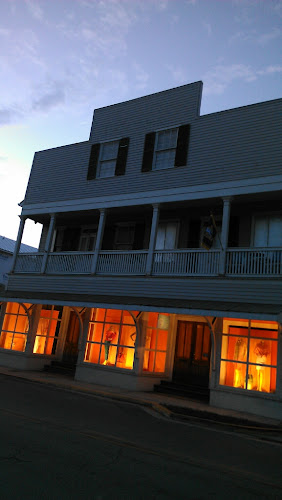 Voltaire Books and the Secret Garden are both gone now but this magazine article on the literary scene strikes a familiar note, money is displacing culture. American Scene: Key West - Articles | Travel + Leisure. But is it? John dos Passos anyone? The poet Frost or Bishop? Anyone read any of them lately? Ann Beattie the novelist high on your list of summer reading? The fact is literature, publishing, reading and writing are all in a massive state of flux. Measuring the worth of a place by its literary output seems an unlikely measure to me. Besides if you look closely at the people who lived in Key West and wrote, they came, they stayed briefly and moved on. Hemingway loved Cuba, his spiritual home was Finca Vigia not Whitehead Street. Besides Key West is still home to aspiring painters and artists, just that we don't know them as famous yet. 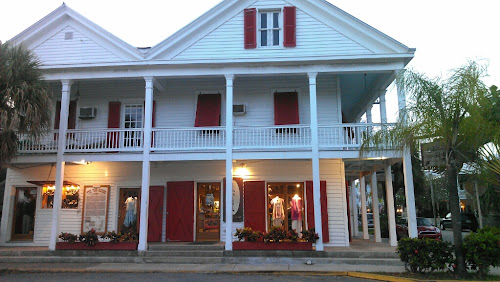 I think what happens is that time passes and that's that. I go back to Santa CruzCalifornia from time to time, the place where I came to grips with adulthood and learned to live as an fault on my own two feet. I go back now and I find it hard to believe the kids there now are having as much fun exploring their young lives as I did exploring my life in 1982. But they are! I've outgrown Santa Cruz because it isn't the place it was when I was in my 20s. It isn't the place I remember. And in the same way Key West, not pregnant with memories is suitable now as the place to grow old, if I can hold on as it out-gentrifies me. Before the advent of the internet Key West really was a back water and it wasn't what I wanted. I'm clear on that. 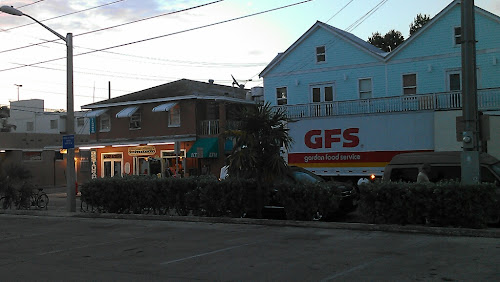 The fact is everywhere is changing. It's hard to believe but Miami was a backwater, and a cocaine fueled one at that in 1982. Key West somehow manages go stay literate, vital, funky and out of the mainstream and even if it isn't what it was thirty years ago, it's still a great place to live. I had a good life elsewhere, in a literary artistic gay friendly community on the West Coast so I don't feel like I wasted my youth in an unhappy place, and the great benefit of having friends in Key West, sailing here from time to time, yet not staying is that I could choose my moment when it was right for me to stay. It's what Hemingway did, Dos Passos did, what Bishop did, what Tennessee Williams did, and what you and I will do in the fullness of time. We have but one life and it must be lived, in Key West or not. And, if the city commission cracks down tonight on the noise ordinance there will be plenty of angry clucking but I'm going to guess nothing much will change. At heart it never really does in the Southernmost City.