We left the house late yesterday morning and had one of the worst rides I can remember on US 1. An unloaded Miami tow truck waltzed from Marathon to Tavernier at 35 miles per hour developing a line of road rage over the horizon behind us. I was four cars behind him and unable to pass thanks to oncoming traffic,  though his driving did send two drivers into the danger zone passing in median lanes, which if caught, gets a reckless ticket no questions asked. I admired their nerve. The problem with amblers on the highway especially when driving a flying barn like the Promaster is the car behind gets impatient with the slowpoke van and the risk of being rear ended is ever present. I drove 40 miles with a car glued to my rear bumper as though the delay were my fault  and all I could do was hope for the best and curse the endless stream of oncoming traffic. The day did get better... 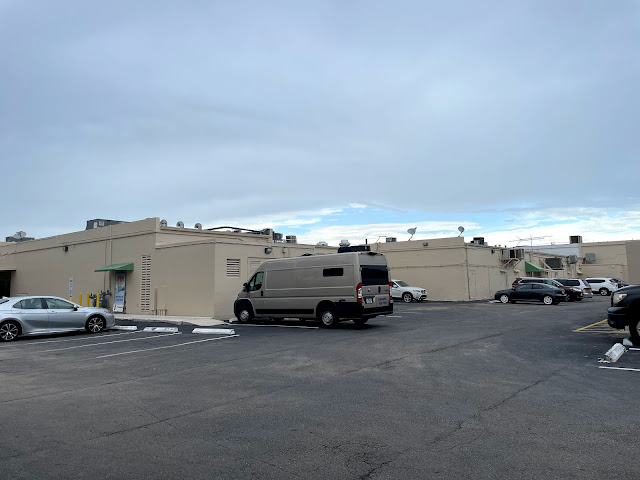 My wife was the chef d'orchestre as is usual when we visit The Big City so we zipped from Robert Is Here for lunchtime smoothies as usual...I did happen to notice this vaguely precise Awful Warning dangling from the fence as I trailed Rusty. It rather reminded me to beware of heffalumps. 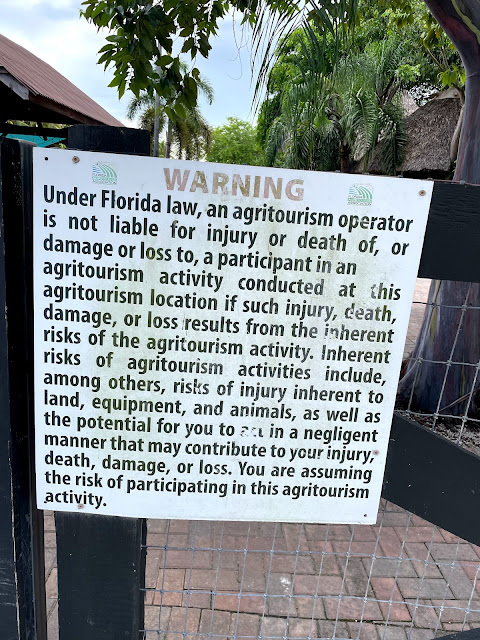 We somehow managed once again to avoid heffalump traps inherent to buying food at an agritourism establishment and went on our merry way to the storage locker. It took me four trips up to the second floor to deliver three loads of boxes on our dolly. This was because I forgot the keys to the padlock on my first trip and had to make an extra round trip to get into the infernal chamber. Sweaty work overseen by Rusty who  sat in the driving seat and watched and approved of me opening up his space on the bed. 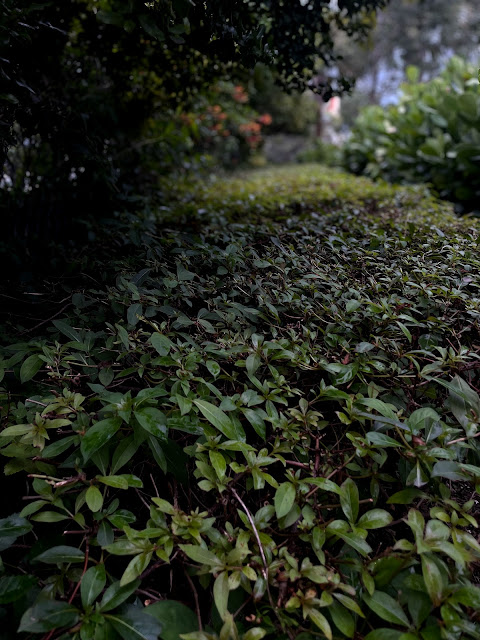 We went to Target to return needed packing materials and some other stuff whose details escape me. Layne decided to add the money to our cash pile for Mexican travel. I wandered around the parking lots with a sniffing dog hence the apparently random pictures of trees and shrubs and buildings. 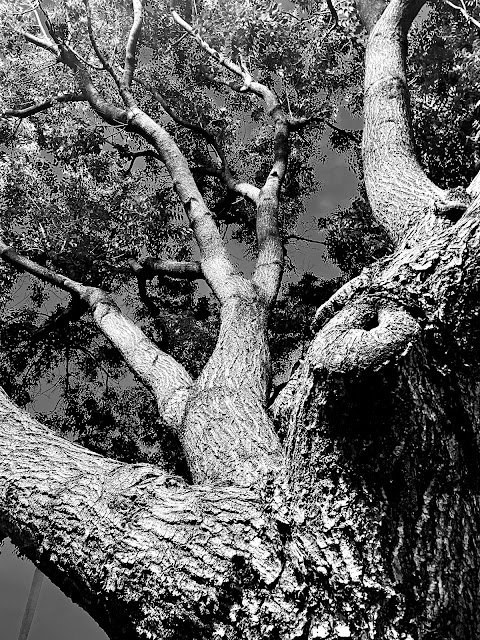 The boxes are gone and though order was not entirely restored Rusty staked his claim immediately. He has made the van his home at last and runs for his bed in the van at the slightest growl of thunder when he is in the driveway watching the world go by. 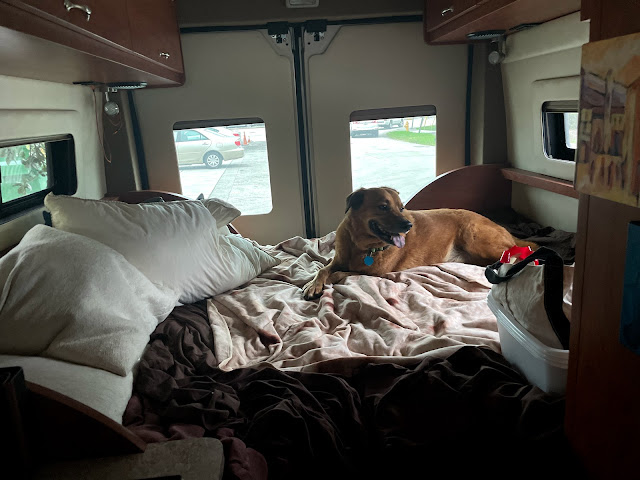 Layne had to make a last visit to see Dr Ritter at the Rheumatology center. I'm not sure how this happened but her arthritis after 25 years residence appears to have gone into remission, just in time for her to get off the drugs and hopefully get a successful vaccination. The afternoon, though rainy, brightened up considerably when the doctor could detect no signs of swelling or inflammation. Quite the surprise. 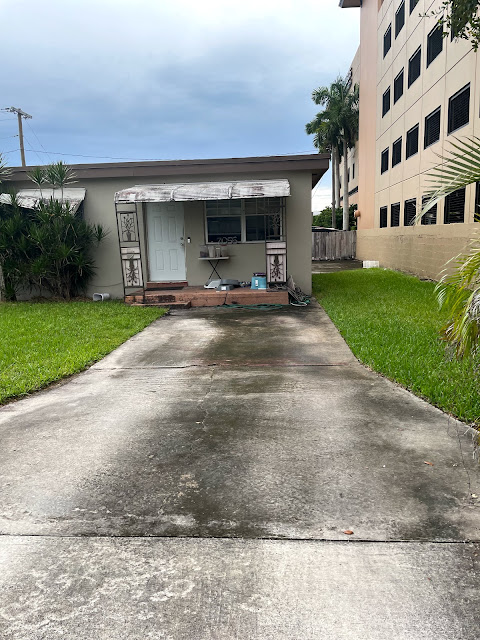 I was allowed up to the office after a walk with Rusty around the the block so I got my chance to say goodbye to the good doctor who himself suffers from Rheumatoid arthritis. I used to come out of the consulting room in the days before Covid to a roomful of patients and wave my fingers and thank him loudly for curing me. Arthritis of this sort is a bastard disease of endless suffering and I figured give 'em hope. Never a truer word spoken in jest. Only thing is, the waiting room is Covid empty these days and no one was there to see Layne's miracle. 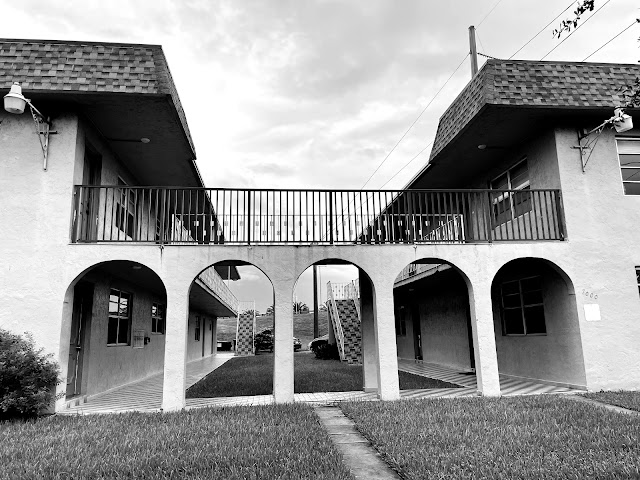 Dr Ritter the workaholic seemed fascinated by the idea of an open ended journey though he wagged his finger in warning about not going south where danger lies. Said the lifelong Miami resident though probably not resident in the drive by shooting neighborhoods. If he only knew our plans Layne said to me after we were out of hearing. Better say nothing or give him a heart attack. We will send him a postcard from Patagonia when they can't hold us responsible for the outcome. (He doesn't do electronics). 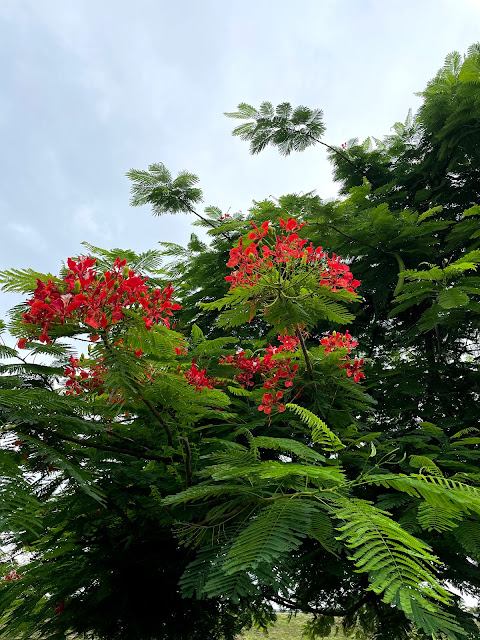 Travel is always a series of goodbyes, and to my fevered imagination travel resembles death inasmuch as here today and vanished tomorrow. Of course it's not as serious as we will be back and most probably after Alaska next year but the bonds are slipping with a mixture of excitement and sadness. 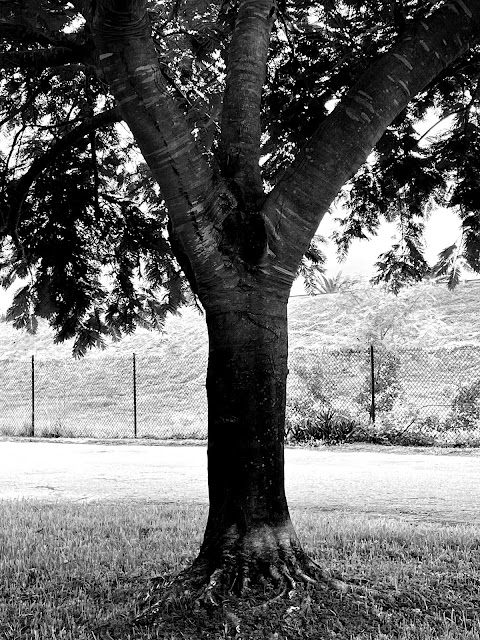 After the doctor we crossed the street and ordered a Jamaican dinner, curried goat for Layne and curried chicken for me from a hole in the wall we've been visiting forever.  We had beef patties for old times' sake and they reminded me how good Dion's patties are in the Keys' convenience stores. We sat in the van eating the beef pastries while Rusty chowed down on a dog thing. "I can feel the end closing in," I said to Layne. "Last time here and there." 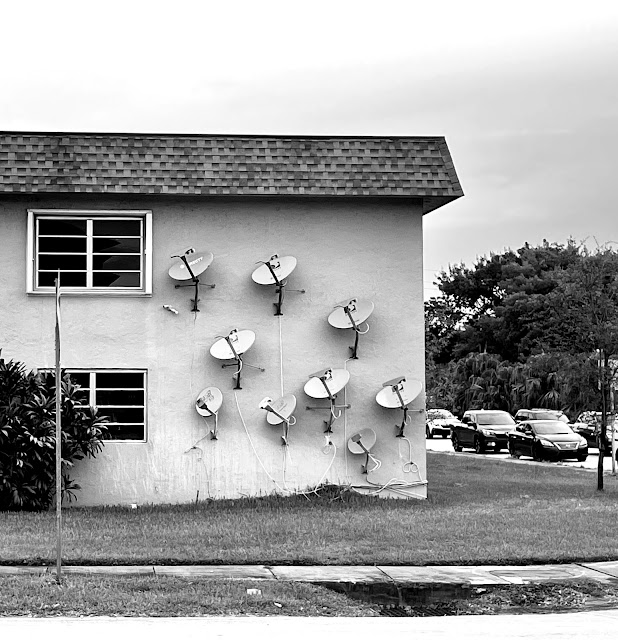 Next stop was Lenscrafters in the Falls shopping mall. I'm not a fan of shopping malls but this one is different, an open air tropical walkway alongside a rushing stream of water tumbling between ferns and over rocks creating small waterfalls. Apparently there is new ownership investing in renovations and I was glad to see that one day people will be able to walk through what may be the antithesis of the traditional shopping mall. Hopefully mask free. I wore a mask as I handed over Dr Douville's lens prescription from the Professional Building in Key West. New lenses in my favorite frame (plus a spare) in a week or when next we drive up. 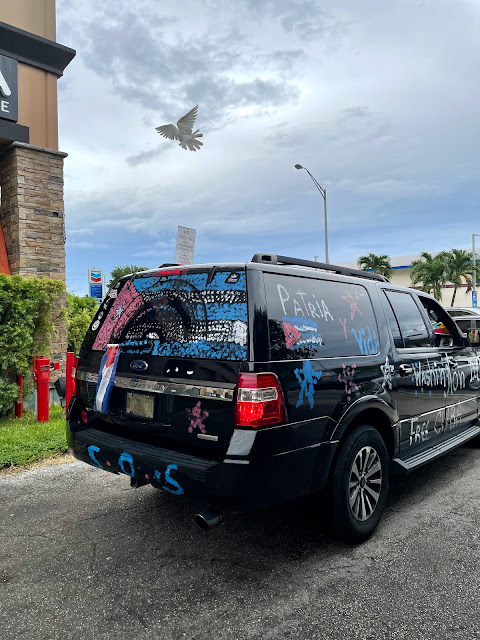 While walking Rusty I passed a left over protestor from the recent burst of Free Cuba marches and flag waving. I have little sympathy for the Cubans who have been given the good life, perhaps the best life, in the US while their fellow Cubans suffer 90 miles away and they can't be bothered to do anything more than wave flags and demand another intervention from the US to get them their properties back. Fidel Castro took his life in his hands and fought for what he wanted and believed in. This lot can't get off their middle class backsides to do the same for what they say they believe in. I can't imagine the hard put upon people of Cuba will ever get rid of the tyranny of the Castros to replace it with the tyranny of these people. Some people never get the breaks and I can't imagine how rough Cubans have it caught between an oppressive past and a no hope future. Meanwhile the Miami Cubans live well and complain. I have no desire to go back where I came from and I have an irrational belief they should feel the same way. 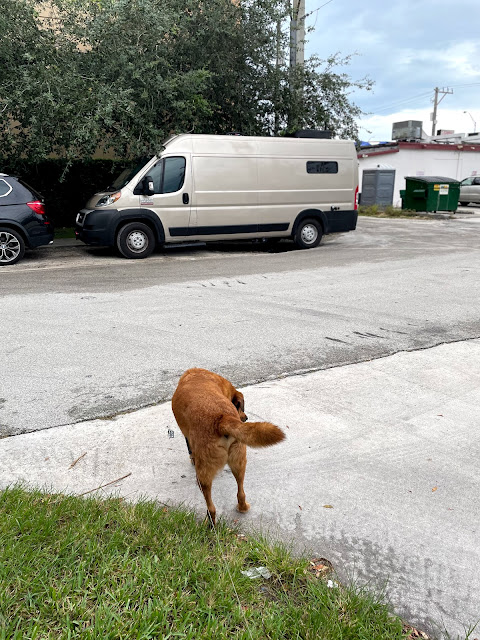 Our last stop on our shopping trip was Petsmart naturally. Rusty needs (needs?) a van sized bed and he gets to choose it. I followed Layne's directions and led Rusty to the bed section. He is like me and knows what he likes. The model he laid down in was the same as the ones at home. Only this time Layne got a slightly smaller size thank heavens and he slept in it all the way home so it passed the Rusty test and should be easier to handle in the small van space. Meanwhile 90 miles away people have to queue to buy staple foods. The unfairness of life seems insurmountable to me. 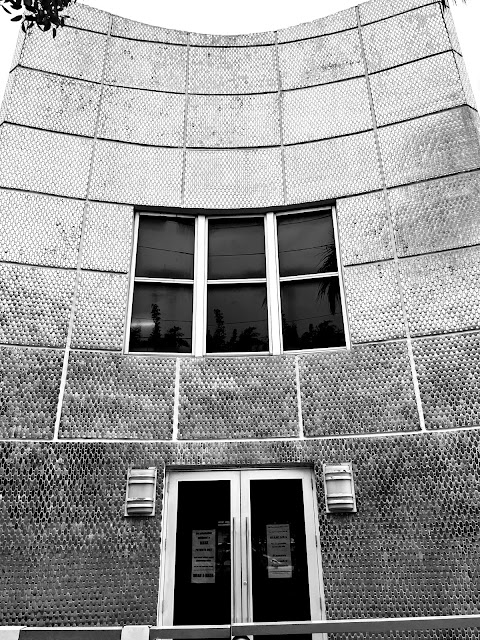 It's going to be a problem on the road but I shall have to harden up. I keep reminding myself suffering is everywhere even when I am not there and it will be after I pass through. Insurmountable. But there is beauty too. 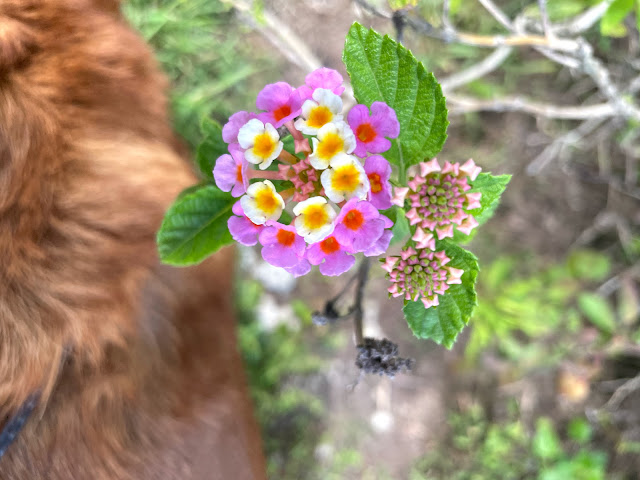 At least he's where he wants to be: 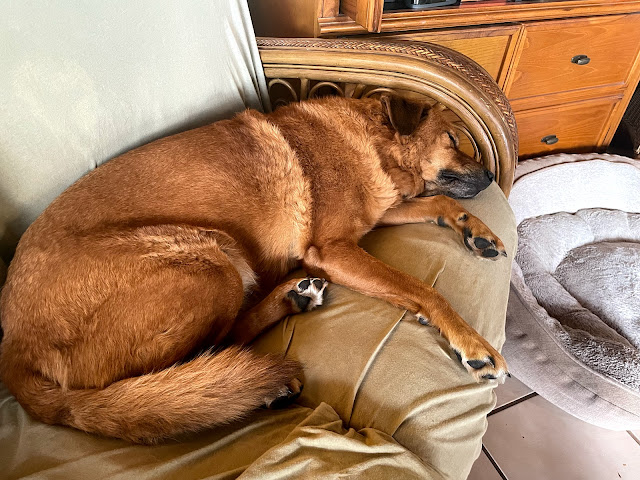