In those days the pictures were smaller and you clicked on them to make them enormous...I knew no better.

A few pictures without stories. Here is a view north from the Key West waterfront. It was Spring Break week and I found myself wandering waterfronts, like a lost soul, waiting for the winds to calm and the sun to warm the waters so I could drive my skiff out and go swimming. I think I was missing being out on salt water after being land bound all winter. In the background is Fleming Key, yet another Navy Base in town: 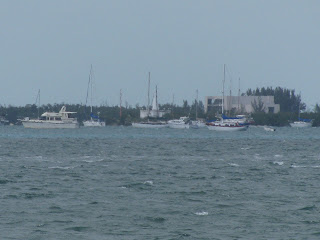 The numbers are in for January and February and hotels, motels and guest houses are reporting a significant drop in income this year. The newspaper reports a 15% drop in Key West and a 46% drop in the Upper Keys which were badly hit by the fire and temporary closure of the renowned Cheeca Lodge. The middle keys dropped almost 10%. They say that lots of people were bargain hunting and even though rooms were filled the room rates were the lowest in years. I wonder how ticket sellers in booths like this one, made out. Summer can be long and penniless if winter wasn't strong: 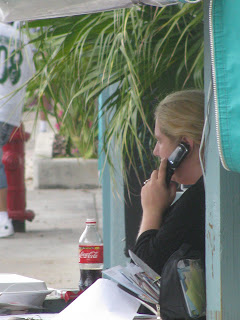 I read a post on the Modern Vespa forum recently about a Vespa owner who took a ride down Florida's East Coast and spent a few hectic hours in Key West. It amused me to read the denigrating remarks made about the "Chinese Junk" rental scooters seen on the city streets in response to the post. I am reminded all too forcefully how my expensive ($7200) Vespa 250 crapped out repeatedly on me until I sold it. Meanwhile the hardworking fleets of "Chinese junk" keep on going and going and going on the city streets, frequently providing sole transportation for their owners. Snobbery is a terrible thing to read. Seen here Japanese and Chinese scooters cluttering up one of the many municipal motorcycle parking lots. 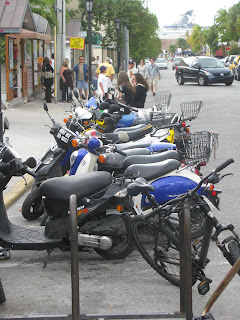 Besides which there are cool Italian scooters in Key West if you know where to look. I saw this golfer turning onto College Road on Stock Island. He was riding a rather cute little Malaguti "Yesterday" and not being the least bit snobby about it: 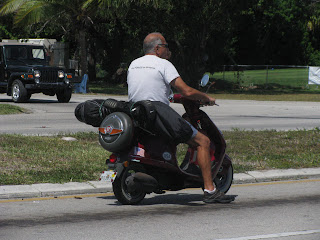 When my wife and were having dinner at Alonzo's recently in the Key West bight we took a protected outside table on the boardwalk and across the water I could see the sole waterfront building of the old Watermark development which became "Harbor House." The development has gone bust and ceased construction but this sole building gives an idea for what was planned behind Schooner Wharf and Lazy Way Lane. I looked at it during the course of the meal, and even though I'm glad the development got stopped by the economic downturn, I wonder how massive the completed buildings would have looked. I wonder if they would have looked as overpowering as their many detractors claimed? I hope we'll never know: 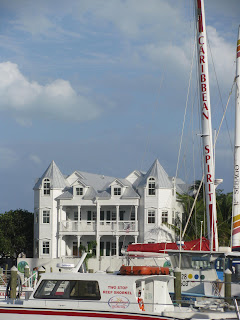 Because it was cool and windy ( it might have been as cold as 63 degrees- 17C) Alonzo's rolled down the plastic windows that line the outside tables along the boardwalk. I thought they gave an odd effect to dinner, like eating in a green house. Our neighbors, tourists, didn't seem to care: 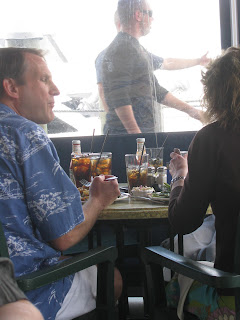 Outside gray clouds rolled over the square riggers docked across the way: 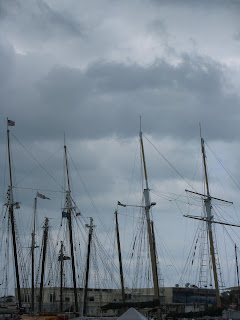 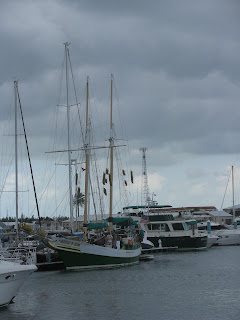 And their flags snapped in the breeze: 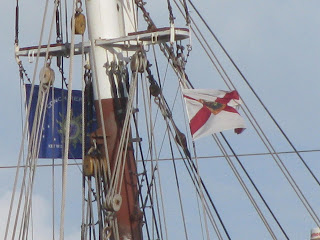 The blue flag represents the Conch Republic while red St Andrew's cross is the flag of the State of Florida, one of many flags that have been raised over the state during it's history, (Spain Britain, France, the US, the Sovereign Nation of Florida during most of 1861 between secession and then there was another flag on joining the Confederacy, and since 1982 the Conch Republic flag in the Keys). Which could be the subject of this languid conversation on the dock, but I doubt it. Sports or fishing or a mixture of both, most probably: 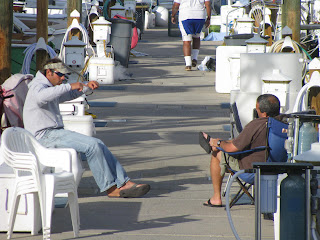 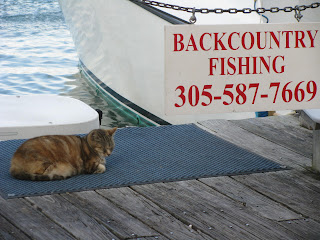 I enjoy watching tourists, though I'm never sure what the protocol is when I see people studying a street map. Do they enjoy the search? Do they want help? Should I offer to help? Will I be rebuffed? Does that matter and should I offer to help anyway? 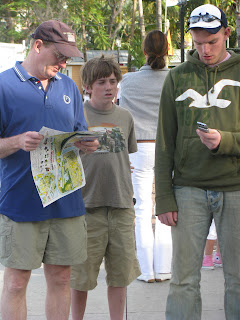 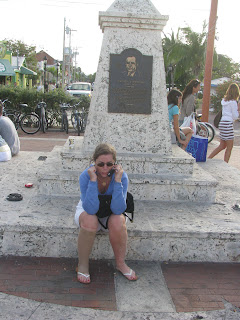 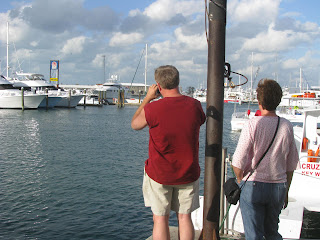 Apropos of nothing in particular I liked these pictures of Cow Key Channel looking north, Key West to the left, Stock Island to the right, with the Stock Island Hilton visible overlooking the water- that would be the Monroe County Jail to give it it's correct name: 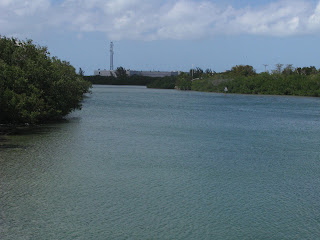 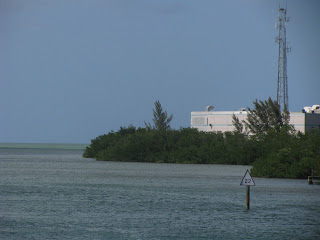 On my recent ramble on the White Street Pier I noticed, for the first time, that the trash cans had encouraging little messages from the city, an attempt to incite people to put their rubbish where it belongs: 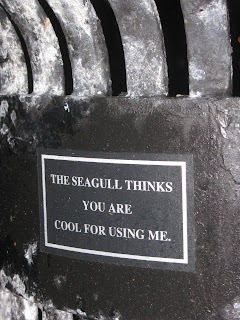 And finally because Miranda wrote in from Up North to remark on my picture of Sandy's cafe, here is another one I put on the Adventure Rider's website. Miranda worked as a clerk at the jail before she came to the police department to dispatch. She was completing her training just as I was starting mine and later I got to work with the reclusive grumpy Conch. The more I worked with her the more I learned to enjoy her dry, acidic sense of humor and her encyclopedic knowledge of Key West, local habitual criminals and the secrets of the jail record keeping department. I watched her repeatedly uncover identities suspects wanted kept secret and she could trace almost anyone from anywhere to anywhere. And then she left, seeking a wider world than the little island she grew up on. I keep enticing her to come back but so far I guess the stakes haven't got high enough. I just hope that the economic recession will close enough of the Malls in her area that she will be forced to get her old job back in Key West. Besides, there's this: 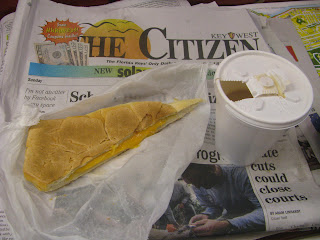 Not to mention an award winning fish sandwich. If Sandy's hasn't got an award for it, they should have. Can't find that Up North.
Posted by Conchscooter at 12:00 AM No comments: