When on the road with wife and dog I am tempted to envy those among us who get to ride motorcycles. At the same time 1800ccs of raw power, a cup of cola and a backwards baseball cap aren't quite my style... In Fort Myers where I photographed him he was run-of-the-mill. 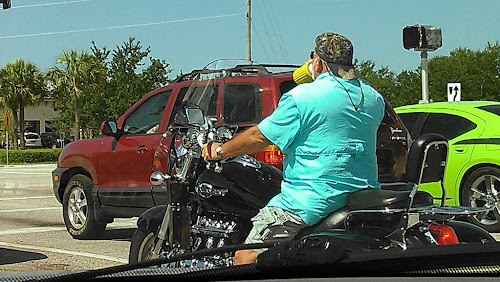 We decided that if this trip was going to be memorable we were going to friend-hop so Ft Myers we saw Jeffrey and Jessica again over Indian food. Great. But ending day two saw us still in Florida. Unheard of! We usually cover huge miles to get out of Flatistan. Not this time. Our next friend is Jack Riepe of Twisted Roads fame, for lunch Monday in New Jersey and that rendezvous was going to require some serious I-95 mile mashing. Poor Cheyenne finds riding the back seat, even turned into a broad couch, to be rather tedious as she can't see out very easily. However she is patient and is rewarded with walks all day long. Some of the Interstate rest areas outside Florida are quite wild... 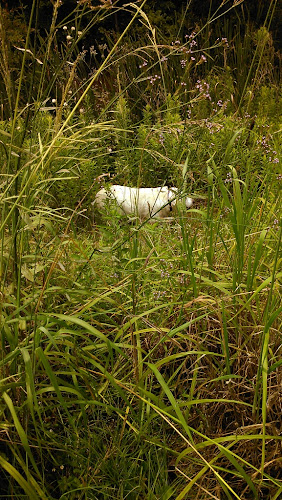 We got to Florence, South Carolina arounf 2:45pm which was lucky as the Long Grain Café closes at three on Sundays and we slid into our booth in time to order lunch. 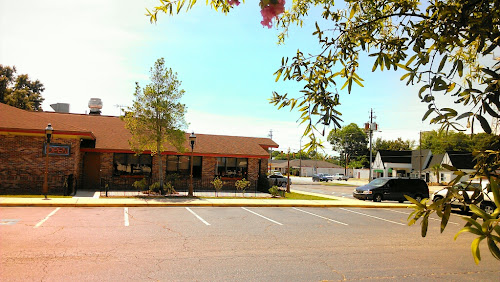 Layne found this place her usual way, hunting through her restaurant apps while I drove. There were cops everywhere on the freeway and they were pulling people over like high school monitors in the hallway. Still people galloped and I tucked in behind the big pick up trucks in my low profile Fusion sedan. So far I haven't got pulled over. Nice. 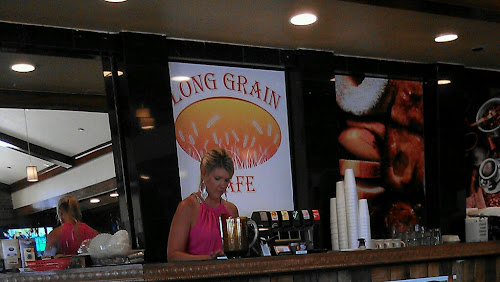 The Long Grain Cafe got tons of positive reviews for its southern food though the place looked intriguingly like a converted Chinese restaurant. 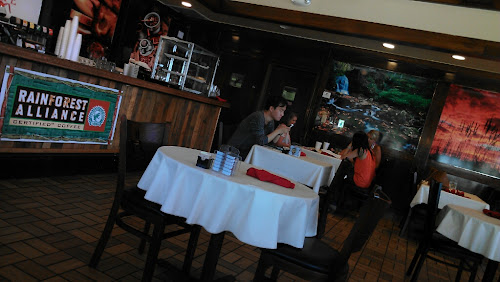 My wife hot grilled chicken, full of flavor and not even slightly dry accompanied by some peculiar but delicious broccoli pancakes which were delicious mixing two delicious yet apparently incompatible flavors. The mac and cheese baked in a dish was okay but nothing like a maccheroni dish I would expect to be served. 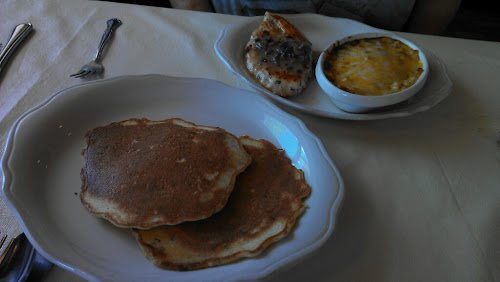 My grilled pork chop was delicious, thin and covered in a savory gravy. Of course I got long grain rice, collard greens and the oddest small red beans packed with flavor. A great dish. 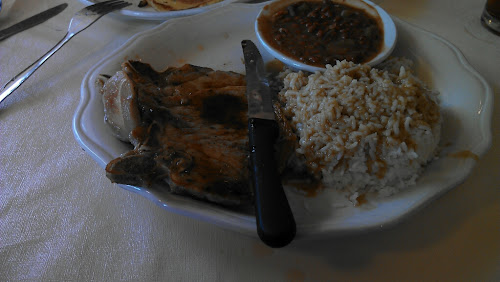 Our lunch including the endless iced tea, sweetened of course, normally a forbidden sugar drink for us, yet delicious was $18. Outside we saw a woman packing her SUV with food. I think she was the chef because I didn't notice a to go purchase during lunch. I wanted to congratulate her for lunch but I was shy. 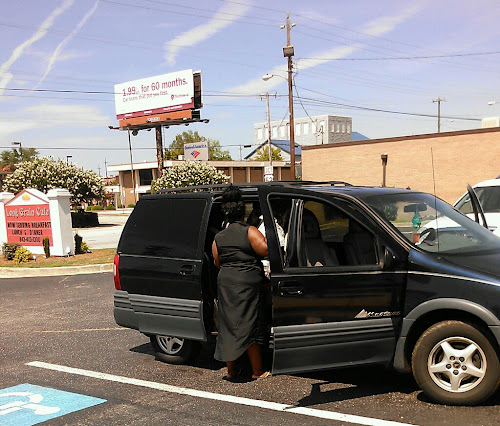 We drive through parts of Florence that were landscaped, filled with trees and shady avenues...and we left by a different route, thanks to the phone GPS that sent us through a more well worn neighborhood. I was racing to get to the restaurant before it closed so I got no pictures but I did get photos on the way out. 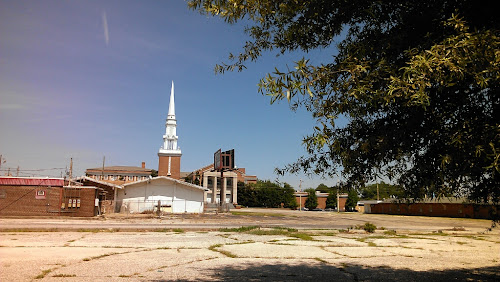 Some Main Street or other! Buggered if I know what. My wife was checking the signs as we aimed for the freeway and as we passed a billboard she said out loud with a deep note of puzzlement "Fire...Adapted...Dog...?" No silly, as we passed the second such:

FireAdapted.Org some sort of wildfire prevention program. Then we passed a construction yard, "Illicit Lumber? " she queried. I think she was in some sort of collard coma as there was nothing actually illicit about Elliott Lumber. Florence was getting a bad rap from my comatose wife. We left. 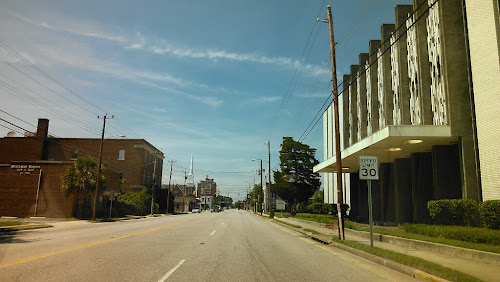 On the way to the freeway entrance we saw a hub cap store. Talk about enterprising! 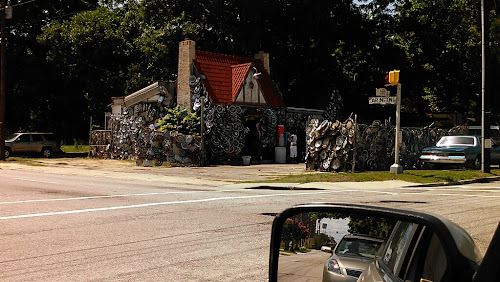 Soon enough we passed the South of the Border nonsense just south of the north Carolina stateline, and as seemed to be happening too much so far on this trip we had to press on, no stopping. I will, one day visit South Of The Border ~ America’s Favorite Highway Oasis and enjoy the kitsch.

Our goal was La Quinta in Norfolk, Virginia and we had hours of tedious driving, eighty miles per hour in stretches varying between 65 and 70 mph. There were no cops on this stretch but I stuck to hiding behind the speed demons in the SUVs watching like a hawk when the way ahead was clear. In the Spring when I got stopped for 70 in a 55 in the Outer Banks I got plenty of ear ache from my wife. Not this time. I've been pulled over in Panama, Croatia, Grand Cayman and Bosnia on various vacations so Herself has come to expect it. Not this time I insist. 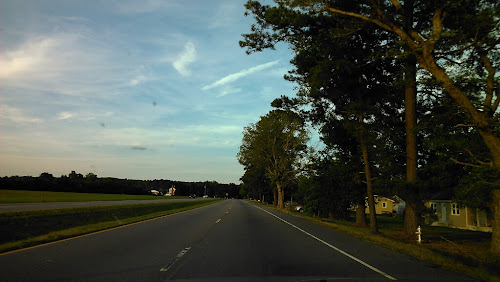 Of course when we arrived at the hotel we were stuck behind people who never heard of booking in advance and the sole clerk had to cope with their particulars and foibles before doing our instant check in. 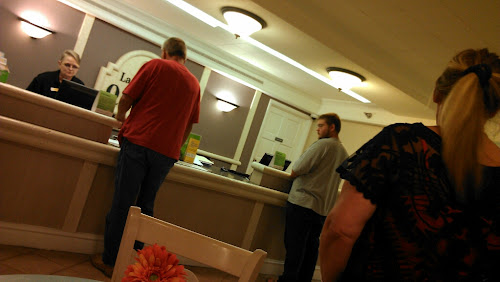 And so to bed. What a tedious way to travel! Making miles....Tuesday will be much better, destination Boston.