The spotlight that was recently centered on the Keys and the prolonged flooding, followed by an article examining the cost and return on investment of raising roads to stay above high tide flood levels have all combined to create some reaction in the Keys. And no, they tell us the sky is not falling. 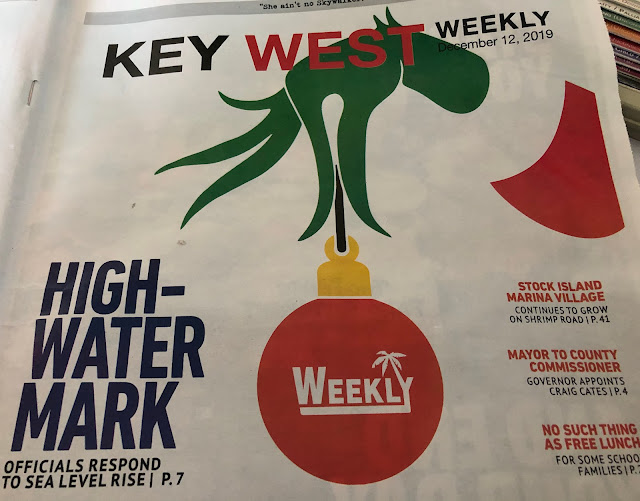 Indeed the Key West Weekly devoted three pages of interviews with the national weather service who points to weather not climate as the culprit for flooding. Then there are the local politicians who assure us they are actively engaged in dealing with climate change issues. If you read through the assessments and plans and fears the idea is to create public buildings that stand high enough to stay dry in future prolonged high tides. What is clear is that flooding is not expected even by the pessimists to be a permanent Atlantis-like state. The idea seems to be that gradually more and more tides will sweep in, settle around human infrastructure and slowly retreat. And then come back in shorter intervals and for longer and no one knows when that will happen. From what I can glean it may be messy by 2045 maybe?  The other problem highlighted in The New York Times writing about the Key Largo neighborhood flooding is that the water is sea water and corrosive making driving through flooded areas a mess for vehicles thus submerged in salt water. Pumping stations for water and sewage are a concern also as they could be flooded for weeks unless raised up. Around here the submerged mangroves did fine though they are dropping a lot of yellow leaves as they disperse the salt from their systems. Grasses and ground cover that were submerged for weeks are now dead at the margins of the mangroves along the trails I walk. 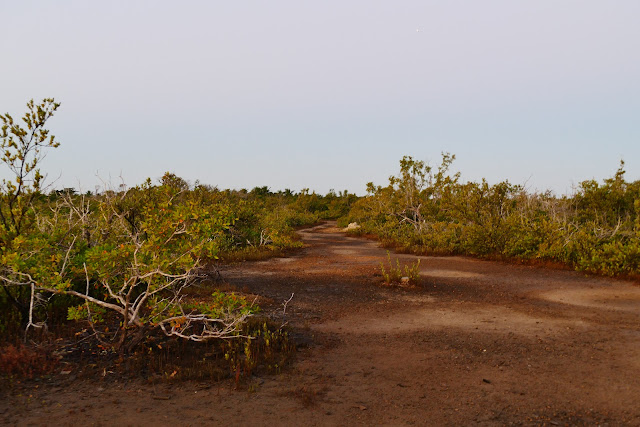 The Weekly also carried an opinion piece filled with optimistic proclamations that the Keys will survive by adapting and building up beaches and encouraging plant growth while also raising the roads and buildings. No one has yet explained where the money for all this will come from and in the spirit of blind optimism expect no answers here. "....that which challenges us leads to new ideas and better days."  And much higher taxes I dare say, in a community averse to taxation to start with. 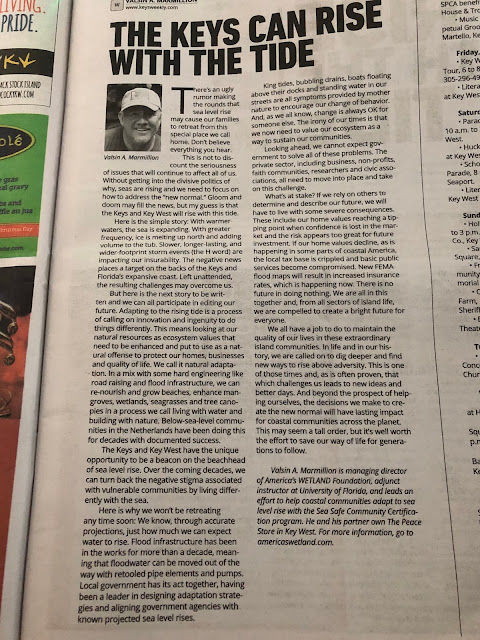 The former journalist in me prompted me to look up America's WETLAND  Foundation and the suspicion is that we are getting our own dose of Astroturfing to play down the climate implications of unprecedented flooding.
Wikipedia:
America's WETLAND Foundation (AWF) is a nonprofit, tax exempt 501(c)(3) organization with the stated mission to save and conserve coastal wetlands in the U.S. state of Louisiana. The organization aims to achieve this mission through a public awareness campaign on the impact Louisiana's wetland loss has on the state, region, nation and world.
AWF is based in New Orleans, Louisiana. The public education campaign started in 2002, when the AWF board hired the public relations Marmillion + Company.[3]
Since being formed in 2003, America's Wetland officials say its message and outreach has resulted in more than 1 billion media impressions worldwide. That tally includes documentaries, news shows, feature stories, billboards, festivals, special events, public-service announcements and Web sites
Sourcewatch.org:

America's Wetland Foundation (AWF) has been called a front group created in 2002 by Shell, and funded by the American Petroleum Institute, BP and a host of other oil industry companies.[1] The group has been described by the Huffington Post as the "oil industry using a perfectly-named front group to solicit taxpayer assistance for BP's cleanup bill" for coastal damage resulting from the Deepwater Horizon spill, although the organization disputes that characterization


Aside from the expense incurred by raising public infrastructure above expected flood levels the value of property won't be sustained if the tipping point arrives and there can be no avoiding the fact that these islands are indeed sinking. Property values are bound to plummet. For now the best tactic seems to be to continue hoping for best. Comparing the Keys to Venice is just weird in my opinion. Venice was built on pilings deliberately and in the face of massive overcrowding and flooding is taking measures to limit tourism and to limit cruise ships. two suggestions that indicate a totally different mentality and set of expectations. In the Keys we expect life to continue as normal, seren peaceful suburbia in the tropics. In Venice they've had thousands of years to get used to periodic floods and on a continent that is actively acknowledging climate change and taking steps to reduce emissions drastically a certain resignation is appropriate.  In the Keys we are forced to pretend none of this is really happening. this is all just a media scare. Okay then. 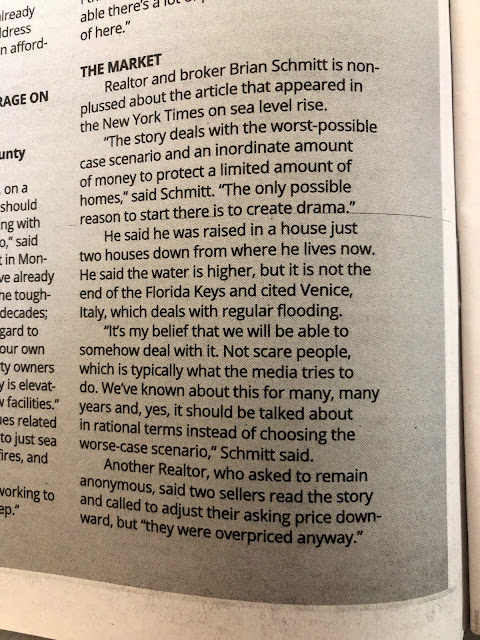 We all have a stake in ignoring climate change and the 97% of climate scientists worldwide who are sounding an increasingly frantic alarm. I have no idea what to do as I too would prefer a technological check mate to the problem, a mechanical solution that lets us all continue as we are. And with the leadership we have I guess we might as well hope that somehow we will deal with it. 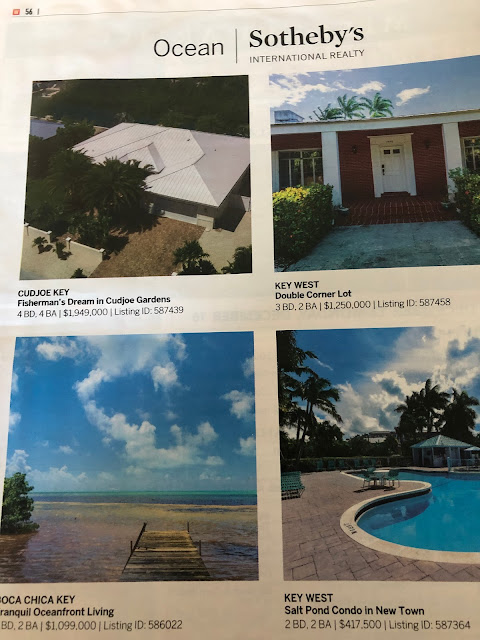 Come on down, prices are still astronomical. It's hard to see how climate change has impacted anything around here. Long may it last.
Posted by Conchscooter at 12:00 AM 2 comments: