After my motorcycle accident last August my inability to walk for a while kept me off the backwood trails, obviously, even as I recovered and started using a walker and then a cane. One trail defied my abilities for the longest time so finally last week I passed another landmark on my long slow road to recovery. I got to the Old Bahia Honda Bridge. 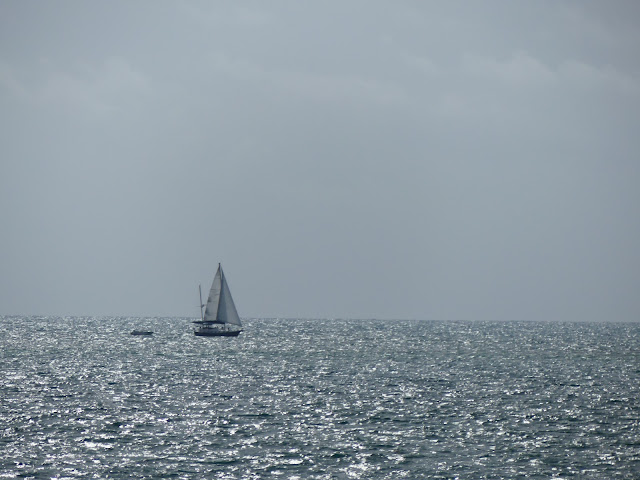 Hurricane Irma in September 2017 wrecked this place tearing up trees, destroying foliage and almost wiping out the resident iguana population. Rusty has never felt any warmth for iguanas and for a while he lost interest in this place as the lizards, deprived of food disappeared. 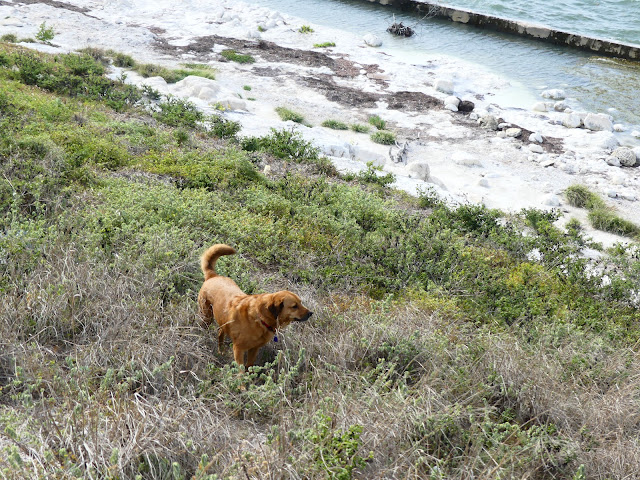 It seems the indestructible iguanas, adored by visitors are making a comeback. Rusty prowled around and found a discarded steak on the bone to the horror of a passing tourist. "I think he's found something dead." Yup I said, usually he likes grass but he's got something crunchy this time. The tourist  frowned like he expected me to reach down and remove the thing from Rusty's mouth. Not only would that offend my buddy it would also be slimy  and rank and nasty to the touch. Forget that. 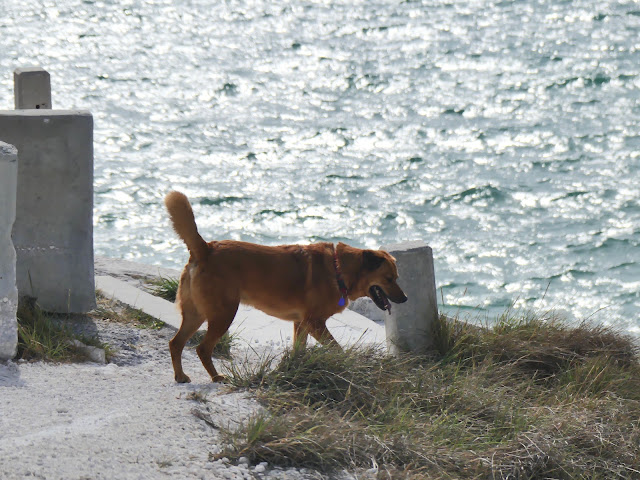 The tourist wandered off most likely not impressed by me or my dog who in turn lost interest in the bone. I was finally at the top of the hill far along the dusty stony track right where Flagler's engineers laid down a pile of dirt to raise the railroad tracks to join with their new bridge across "deep bay"  (Bahia Honda) where the water was fifty feet deep. When the road was re routed, as shown below they left behind this artificial hill, the highest point of land in the Keys. 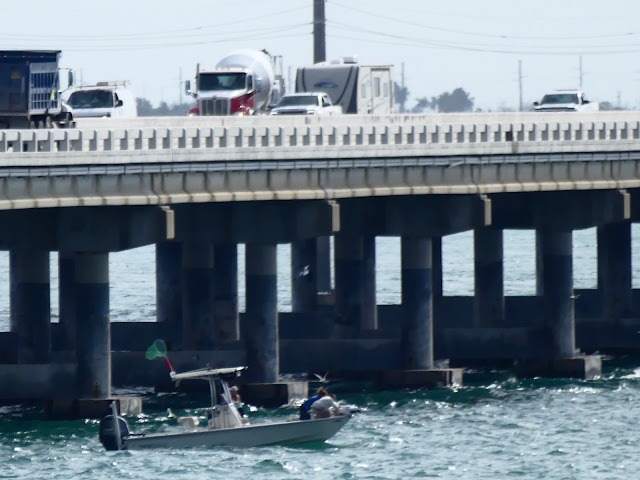 And there is the old bridge decaying slowly. When a hurricane wrecked the railroad in 1935 in Matecumbe Key the line lay dormant for three years.  Then the state of Florida went mad and bought the right of way and turned it into a road. The sort of government intervention that would drive modern economists into a frenzy. Actually the plan worked real well and every time you drive the new road and look across at the old road remember it was your grandfather's tax dollars all over the country that did stuff like that a hundred years ago. Lucky us! 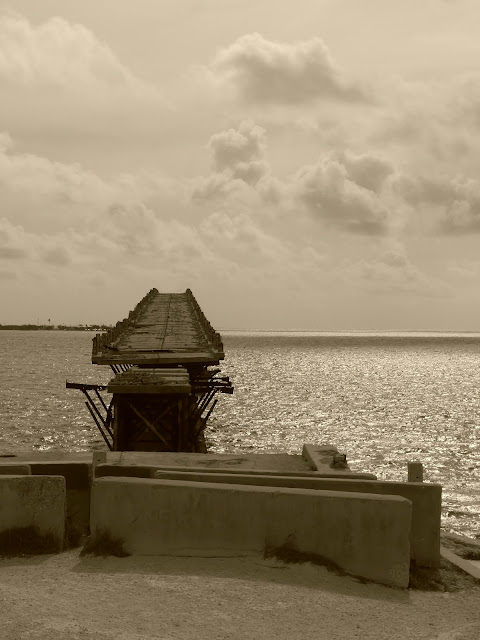 The old pump house got half torn down by the hurricane but as it was used as a loo by overnight anglers the loss is mostly sentimental. In 1942 the US Navy was busy fortifying Key West for the conflict and they decided catching rainwater was not a viable way to conduct a World War so they built a pipeline from Miami to key West. And along the way they boosted the water pressure. 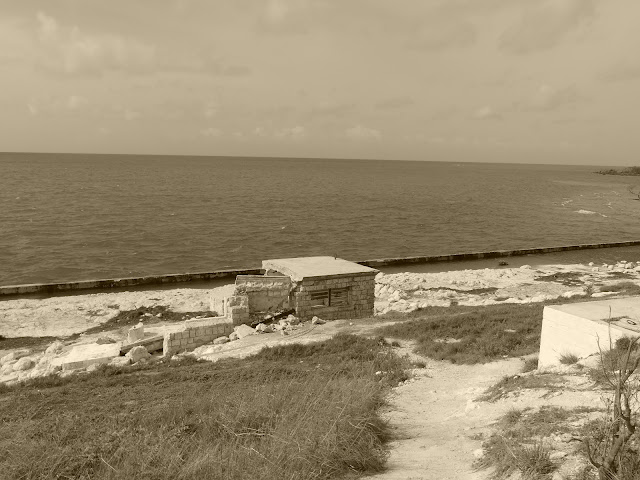 Nowadays there is a newer and bigger line alongside the road that was opened in 1982. The fact that seawater is polluting the Florida Aquifer hasn't reached public consciousness yet but climate change (the thing that isn't happening) is affecting Florida in subtle and not entirely planned ways. Loss of subterranean drinking water is a huge future problem. Catching rainwater may be the way of the future once again! 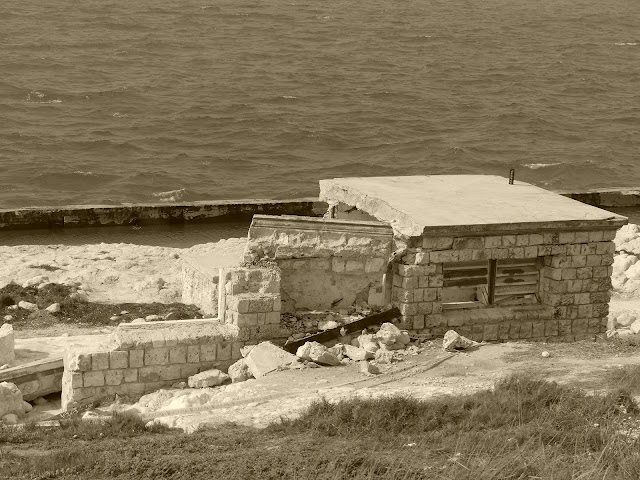 I loved spotting a pontoon boat being used totally inappropriately on the open waters on a  windy day. The driver knew what he was doing sliding through the spray. Find a body of protected water and you have the ideal platform for a swimming picnic in the Florida Keys. 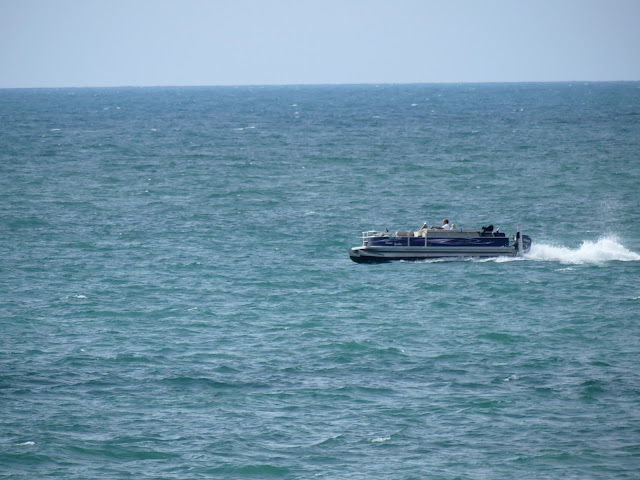 More properly I also spotted a big old ketch sailing in the breeze towing a  huge hard dinghy. It looked pretty but as the breeze died the boat started to "hobby horse" in the swell, it's progress hindered no doubt by the huge Boston Whaler type dinghy  on the towline. That's my issue with sailing in old age. When it's windy you want to stay snug at anchor, or at least I do!  Then when the wind dies down and you poke your nose out you have to use your engine. Might as well have a trawler in my book. 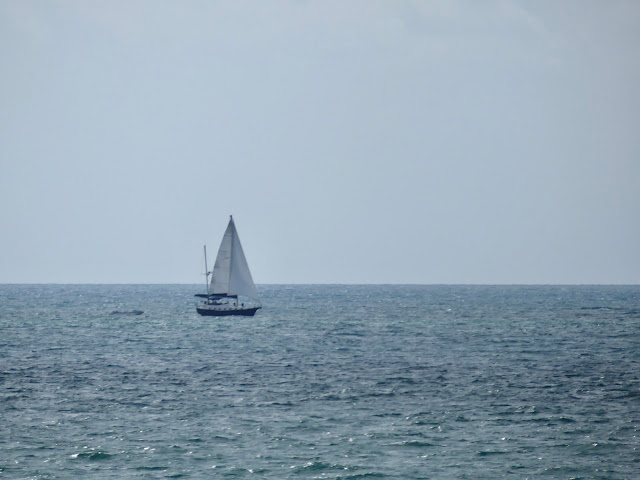 My buddy Webb Chiles left Panama on March 14th and here we are almost a month later and he is slowing clawing his way past Mexico at speeds as low as half a knot (nautical mile and hour). He loves being at sea so for him it may be frustrating to be sailing so slowly to San Diego. At the same time he is exactly where he wants to be. Check out his monitoring page HERE. He carries a satellite sender called a Yellow Brick and every six hours (marked as blue dots on the chart) it posts his speed, the air temperature and his course. The closer the blue dots are together, the slower his progress over the previous six hours obviously. 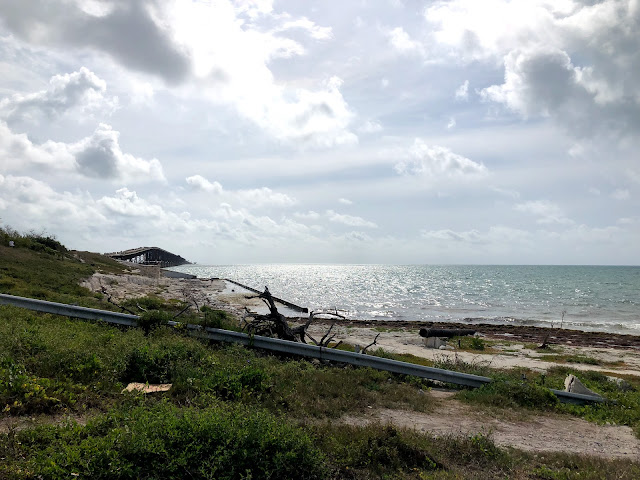 Back in the Florida Keys Rusty and I wandered over the hump of and, making way for other visitors to stop and contemplate the decaying hundred year old bridge. 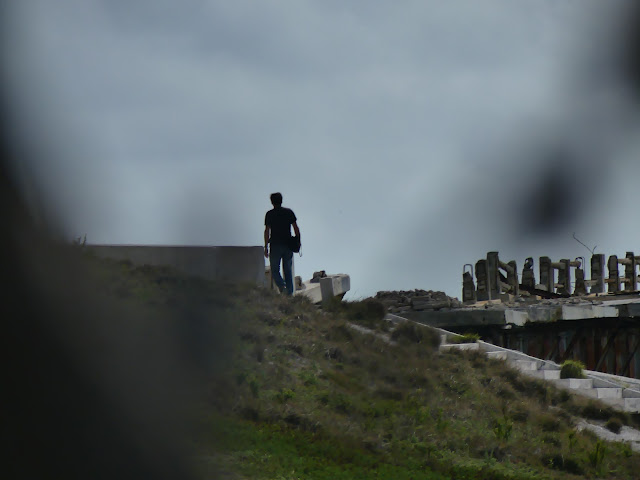 I hope it stays around for a while. 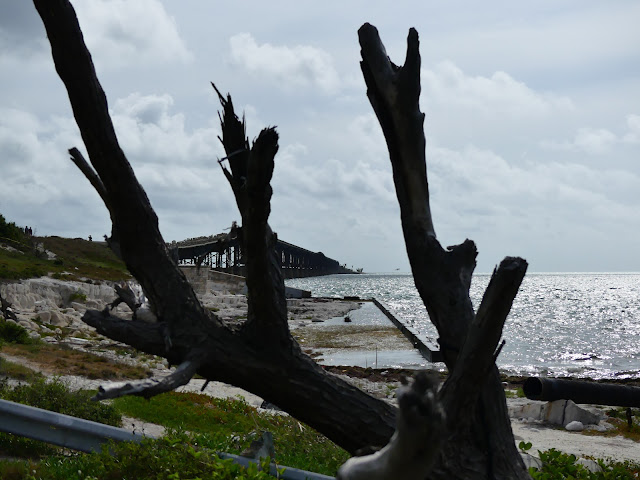 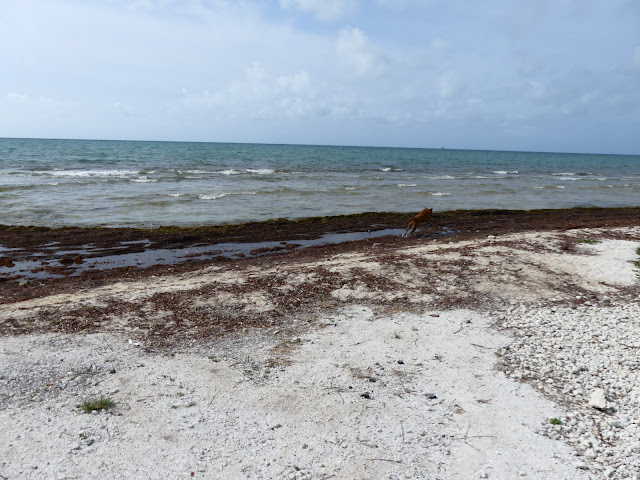 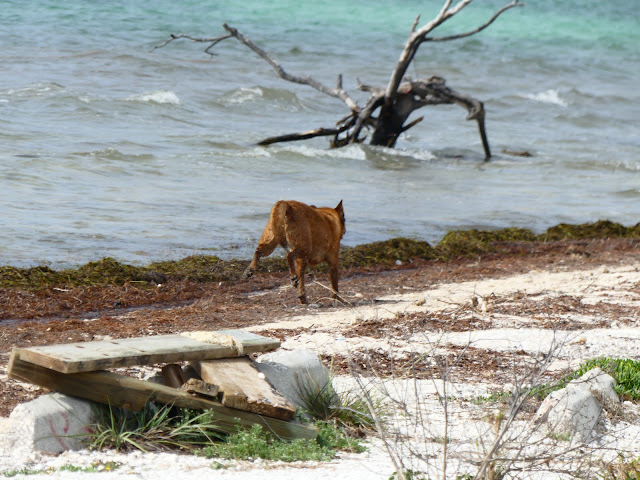 He  ran, I played with my camera. 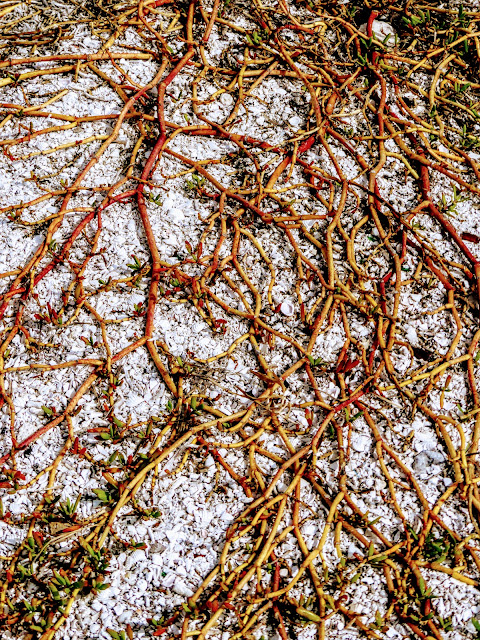 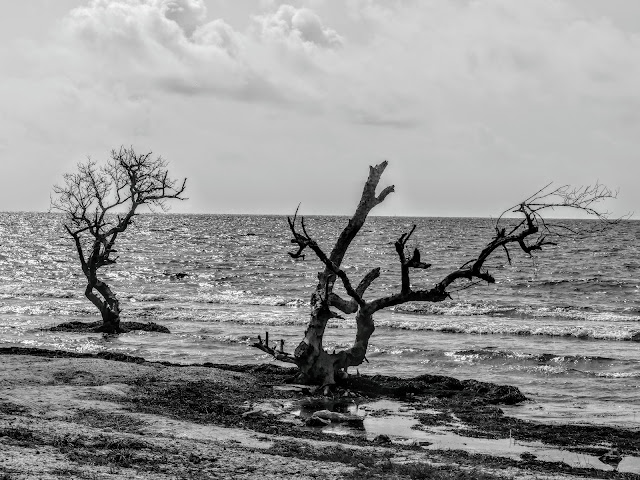 A  great morning followed by lunch with my wife in Marathon.
Posted by Conchscooter at 12:01 AM 2 comments: